How do you feel when you see this ad? 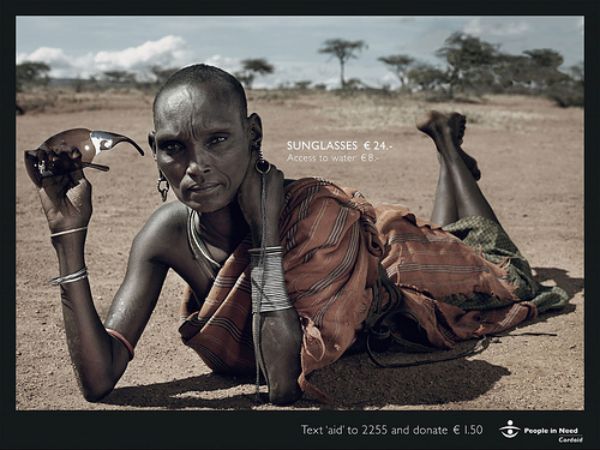 I’ll tell you the truth: I uttered “whoa” as I finished reading it. The ads were created by Cordaid for third world poverty.

Sometimes a nice smack-in-the-face reminder is just what we need when we’ve been complaining about not having the latest Google phone, or top-of-the-line Mac, or even a sweet pair of sunglasses (although considering I always sit on my sunglasses, I refuse to spend more than $10 on a pair. Still, that’s $10 a pair).

But some people do not appreciate this form of manipulation, or are downright offended by advertisements like these. Two recent campaigns that caused some negative backlash.

The NYC Child Study Center used a ransom note as a means of portraying how depression can “take your child.”

This campaign also included a note about autism, saying, “We have your son. We will make sure he will no longer be able to care for himself or interact socially as long as he lives.” The campaign was pulled because critics complained these ads reinforced negative stereotypes.

Another offensive campaign was Schick’s Booby Wall (check out another one of their not-so-gender-correct ad campaign’s about “trimming the bushes”), which is supposed to bring awareness around breast cancer via an online picture exhibit of breasts.

This campaign is still in rotation, despite the fact that some viewers think it is trying to “sex-up” cancer, that it is thinly-veiled exhibitionism, and reinforces the objectification of women.

But, Do They Work?

Some social campaigns are obviously going to be smarter than others, and I’d be hard pressed to find people who don’t agree with the Dutch Cordaid/People In Need campaign.

I mean, who can argue with water being more important than sunglasses?

The real issue is whether these “shock ads” lead to much needed awareness, or merely outrage.

What is the more effective to promote behavioural changes: shame, or by positive experiences, such as directly connecting with other cultures? Share your thoughts below.