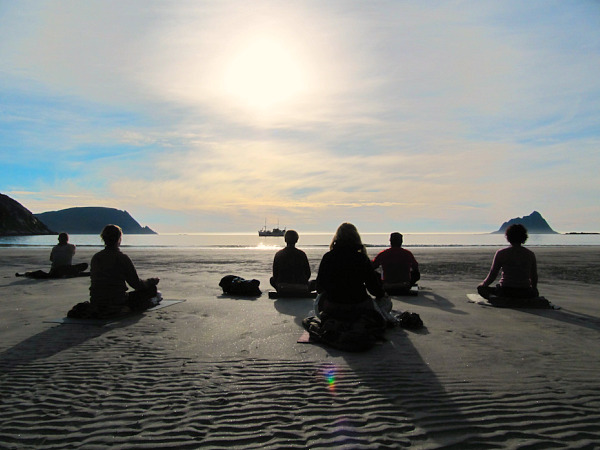 Wyndham Wallace heads north to broaden his horizons – and shoulders – via a unique excursion into healthy living.

It’s 8.45am on Saturday morning, and I’m being guided to my yoga class by a reindeer.

I’m sitting with four other would-be yoginis in the back of a car driven by a jovial Norwegian local to the village school in Skogvika when the huge antlered beast lumbers into view, its rear end swinging loosely.

While my companions marvel at being so close to this magnificent animal, it parades ahead of us for a good mile, slowing the car to a crawl, then lurches off the road and trots off into the distance. It’s the latest in a series of mind-bending moments in what I’d previously thought would be a principally body-bending trip: a five-day Yoga Safari in the Arctic.

I’m here at the invitation of Erlend Mogård Larsen, a music festival entrepreneur with whom I’ve had the pleasure of working on a number of projects. A few years back he decided to commission architect Sami Rintala to convert the Vulkana – a 75 metre long former whaling vessel – into a spa boat, with a hot tub on deck, a Finnish sauna with a view out across the water, and a hamam and ‘Zen Lounge’ in the hold.

Rather than confine its use to festival after-parties for drunk rock stars, he instead hit upon the idea of trips that combined the boat’s facilities with healthy living. Using Norway’s extraordinary Arctic landscape as a backdrop, Larsen hired a yoga instructor and chef Eivind Austad to provide services on the boat.

Bamboozled into Getting Healthy 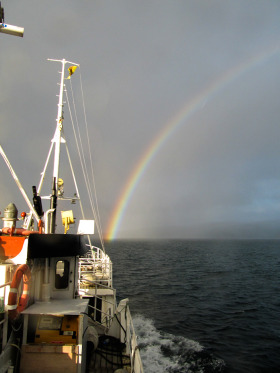 The Vulkana heads for its destination

I decided to go on this uncommon safari because I’ve recently been diagnosed with high blood pressure. And, the idea of swapping yoga for my hedonistic lifestyle is unlikely ever to be as appealing as a trip on board such a cruise through the Lyngen Alps might make it.

We depart from Tromsø in the far north of Norway on Wednesday afternoon, moving north through the fjords towards Bromnes, a tiny settlement on the island of Rebbenesøya.

With me on this inaugural voyage are another nine participants, and I’m soon relieved to discover I’m not the only person with nil yoga experience. We watch the mountains roll past while sweating it out in the sauna or being cooled by the winds on deck, gazing at vivid rainbows when a shower breaks out.

Then we alight a couple of hours later, cottages and holiday cabins dotting the road from the harbour to the village hall selected for our first session. I feel we all share a sense of anticipation as we stroll the mile along the coastline, and I notice a potent relief at my separation from
everyday life.

The appeal of yoga has always been somewhat of a mystery to me, the domain of pretentious yippies fond of patchouli oil and IKEA. By the end of our first session, however, I’m forced to reassess this stereotype. For starters, the first fifteen minutes spent lying on my back in silence represent probably the first real slowing down I’ve done in years.

I might not subscribe to the idea of letting my navel drop to my spine to find my inner core – or whatever it is that instructor Schirin Zorriassateiny encourages – but I realize that in just two hours my shoulders have loosened and my English buttocks are no longer clenched like I’m trying to crack a walnut between them.

Whether I’m exorcising the history of trauma and neglect my body has suffered I can’t say, but I concede afterward that I’m almost high from the exercises.

I also soon decide that yoga exercises, while testing, are no more stressful than slow motion aerobics. Whether I’m exorcising the history of trauma and neglect my body has suffered I can’t say, but I concede afterward that I’m almost high from the exercises.

I’m clumsy, of course: so unable am I to get my body to respond to Zorriassateiny’s simple, gently spoken instructions that my brain might as well be carried in a shopping trolley.

But by the time we gather two days later on a deserted beach the other side of the island at Breivika, stretching in blazing sunshine beneath vast mountains connected to water, I realize I’m standing taller, breathing deeper, increasingly flexible and markedly better at keeping my balance.

The healthy, reviving atmosphere isn’t all down to Zorriassateiny, however. Awaking to the smell of Hungarian rye bread wafting through the cabins provides unimaginable motivation to rise early, even when our joints are stiff and painful. 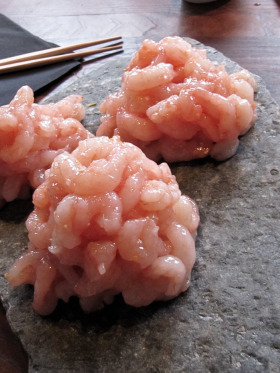 Tattooed chef Eivind’s menu is as spectacular as the scenery, a mouthwatering combination of local ingredients and Japanese methods learned during a two year apprenticeship in one of Tokyo’s well-known establishments, Mutsukari.

He dishes up monkfish and haneskjell, small scallops only found in the North and caught the same day by his coastal fisherman friend, Kaspar.

We enjoy Thai soup, halibut sashimi, raw shrimp, mussels steamed in beer (pretty much the only alcohol allowed on board) and ohitashi, a nest of nettles, sugar peas and beetroot stems topped with dried cod, served with boiled salted okra on flat rocks rescued from nearby beaches.

His best piece, however, is a slice of wine-steamed halibut, delicate and firm, possibly the best fish I’ve ever eaten.

After four hours of yoga and meditation these meals are not only welcome, they are necessary, and the dinners shared round the long table are a highlight of each day.

That is, until my back snaps.

Muscles I never knew I had seize up overnight, leaving me bent over double. It’s like I’ve rewritten The Old Man and The Sea, I joke, but Zorriassateiny comes to the rescue, laying me down in the Zen Lounge and practicing something called The Rosen Method on my aching back.

Barely touching me, she soothes the inflammation so successfully that I drift off to sleep once she’s done. I’m genuinely impressed, so much so that I wonder if I should reconsider my cynicism towards the physical and spiritual aspects of bodywork that she’s keen to emphasize.

But when my back stiffens up again the next day I discover that a ten-minute soak in a 44 degree hot tub with a view over the ocean has an equally powerful effect. And that, I’m ashamed to admit, I can also do with a cigarette. 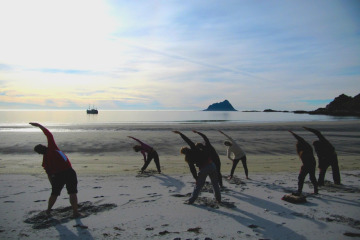 Practicing on the beach

As the Vulkana pulls back into Tromsø on Sunday afternoon, I’m cooling off in the shower after a long sauna. I’ve sweated out the last of the toxins that will be sweated out on this trip, whilst sipping on a tea made from herbs Austad gathered especially for the journey.

Parting soon afterward, however, knowing that we won’t be meditating together on a beach again that day or feasting afterward, nor will we be gathering in the sauna the next morning or nursing our pains publicly with a strange pride – it provokes the only predictable reaction from a man like me. I head to a local bar to drown my sorrows.

As I sit there I concede that I’m going to have to work hard not to fall back into old routines fast. Still, I realize, there is a Zen-like calm to my demeanor: my blood pressure must surely be down.

If I look deep inside myself – and Zorriassateiny would be pleased to know I’ve been doing more of that recently – this should be motivation enough at least to adapt at least part of my lifestyle to what I have discovered.

Do you think going on a yoga safari is an inspired idea, or just another yoga gimmick? Share your thoughts below.