[Editor’s note: This article was published in its original form here.]

I ONCE SAT in a cafe in Tangier, Morocco. Some famous man-filled cafe where Western writers used to pen masterpieces. Or cruise for ass. Or trip out on exotic drugs. Or, most likely, some combination of the three. It was popular with tourists—in the way that that Hemingway bar in Havana is popular—and with well-heeled locals. I was the only female, Western or otherwise, in the joint.

He had that expat look of permanent sunburn and wizened self-satisfaction.

I watched as a man strode in—large, burly, brusque. He may or may not have had a white beard—I remember something about white hair, though his head was most definitely adorned with a scarf. He had that expat look of permanent sunburn and wizened self-satisfaction; he wore a long, flowing robe of ethnic print and carried a thick wooden staff. Two younger men, one with a notebook, another with a video camera and a microphone, followed as he walked purposefully over to what I assumed to be his regular table.

He leaned back in a posture of pontification and began what I imagined to be a long soliloquy, in French, on Moroccan culture and the changes therein over the last decades, as observed by his keen eye. The guy with the notebook nodded and scribbled. I watched the camera man look around at all the Moroccans in the cafe, wearing t-shirts and jeans, then back over at the burly old dude before his camera, his attire an approximation of those sepia-hued photographs old explorers and anthropologists took, which are now sold as postcards.

Our eyes met briefly. I smiled; the camera man looked embarrassed. I chuckled and imagined we were having the same thought:

There are few things funnier to me than people taking themselves too seriously. Travelers/expats who over-identify with their adoptive countries provide endless amusement while on the road. So when I later came across the pointed fingers and fake-gold-gleam of Khmer glamour photos in Cambodia, I knew it had to do it—my own chance to “Go Native”.

The phenomenon of Khmer glamour photos

To clarify, this isn’t a gimmick produced for tourists; this is a Cambodian—nay, Southeast Asian—phenomenon. People dress up, get a pound of foundation and fake eyelashes slapped on, squeeze into gaudy garb and let themselves be molded into ridiculous poses. Then they are Photoshopped several skin tones lighter and superimposed in front of illustrious sights like Angkor Wat or the parlor of a well-to-do person’s house (a fireplace and Persian carpet are key). People do it for their wedding, for their coming-of-age, as family photos—it’s not uncommon to see a large framed print hanging in someone’s home.

It is legit, authentic inauthenticity.

It is, in short, the Khmer version of cheesy K-Mart photos. It is legit, authentic inauthenticity.

I hadn’t noticed the photography studios sprinkled around town until someone pointed them out. The sun-bleached signs of smiling couples, the window displays of sequined gowns. They’d faded into the visual static of Phnom Penh storefronts.

Khmer glamour photos are something of a rite of passage for Phnom Penh expats, especially the females. So I rounded up a posse, walked into the first decent-looking studio we passed on Monivong, and made an appointment to be turned into an Apsara princess.

At two o’clock on a sweltering Sunday, five of us clamored up the back stairs of a photography studio to the dressing room. It looked like the backstage of an Asian cabaret: make-up and sequins and traditional costumes stacked to the rafters. 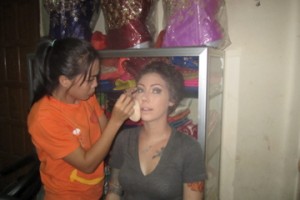 There was only one girl doing hair and make-up; at about 30 minutes each, we were there a long time. My friends chose the $10, more modestly ridiculous options; I opted for the $15 Apsara extraordinaire, which included more fanciful skirt folds, extra fake-gold bangles, even a wig.

A couple days later, I went back to the studio to pick up my prints (three prints were included in the $15 price). I thought of the dude I’d seen, years ago, in the cafe in Tangier. The difference, I decided, was humor. And self-awareness: I was doing it as a joke, a statement on the ridiculousness of myself in the Khmer cultural context and how I, at 5’10″ and a riddling of tattoos, will never, ever blend in with or a be a part of that culture. The photos were tangible evidence of the chasm between worlds.

I smiled and laughed out loud and thanked the ladies again.

I went to meet a few other friends for dinner at the Chinese Noodle Restaurant. I took out my prints and they laughed—it was ridiculous, right?

I noticed the waitress peering over our shoulders. I felt suddenly self-conscious. Would she be offended? Would the joke translate? 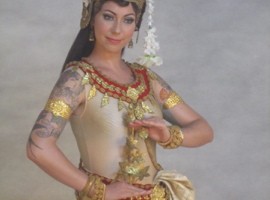 To my relief, the waitress smiled, a chipped tooth and deep lines. Then she reached over and took one of the photos in her hand and examined it more closely. “Very beautiful,” and she looked up at me with a kind of sincerity that made me blush.

This was not the reaction I’d expected. I felt somehow more embarrassed.

The waitress proceeded to pass my prints along to the other tables in the restaurant, all the women smiling and nodding and murmuring their approval. The women’s eyes glanced over at me and it was a kind of warmth I felt, maternal and accepting and utterly devoid of the snarky irony with which I’d walked into the photography studio with.

They didn’t think it was funny, and they weren’t offended. They thought it was beautiful.

I hung my head. “I’m an asshole,” I announced. Then, looking up and grinning, “But at least I’m a beautiful asshole.”

21 Reasons You Should Drop Everything and Move To Phnom Penh

The Insane Disparity Between My Job as a Teacher, and the Violent Protests on the Streets of Cambodia

How 12-Step Slogans Helped Me in Phnom Penh

How To Rock in Phnom Penh

Notes on the Old and the New in Phnom Penh

Notes on Running Out of Money