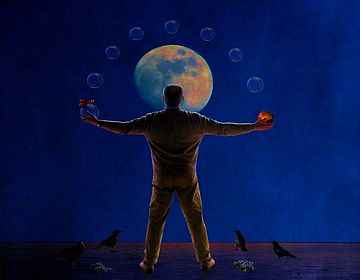 Many of you have probably seen coverage of the 40th Anniversary of the first moon landing.

Undoubtedly an amazing feat, the article that interested me most tackled how traveling to the moon changed the lives of the 24 American men (yes, no women) who went there.

Turns out quite a few of the men ended up taking life different paths upon their return to Earth. Buzz Aldrin became an alcoholic, James Irwin founded the religious organization, High Flight Foundation, and Charles Duke formed the Duke Ministry for Christ.

Astronaut Edgar Mitchell, who rode on Apollo 16 in 1971, had this to say about the adventure:

What I do remember is the awesome experience of recognizing the universe was not simply random happenstance…that there was something more operating than just chance.

Mitchell founded the Institute for Noetic Sciences, a leading institute for consciousness studies, upon his return. He also maintains that UFOs are real, and that the US government has been covering them up for 60 years.

The Need to Create Labels

According to the article, an urban myth exists that those who went to the moon come back pretty looney. But David Sington, a documentary filmmaker who has met several of the astronauts, says that simply isn’t true. Rather, the trip gave the astronauts “the ultimate perspective.”

The trip gave the astronauts “the ultimate perspective.”

I find it laughable that we, as a culture, so often feel the need to put people in the crazy box because they have had some form of spiritual enlightenment. Most of us who have traveled, even just to the next town over, understand the deep implications that come with knowing a different perspective and place.

It makes perfect sense to me that going to the moon would profoundly change a person’s view of this life and what happens after it has ended.

Then again, there are also those who say the moon landing was a complete hoax.

What do you think of the spiritual shifts felt by the astronauts who went to the moon? Share your thoughts below.