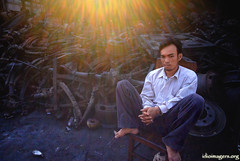 Is there a link between monetary wealth and quality of life?

I pose this question because mainstream economic theory and the policies promoted by international “development” institutions such as the World Bank, IMF and WTO, government agencies such as USAID, various UN programs, and the majority of NGOs assume that monetary wealth and human well-being are tightly coupled, even synonymous.

Of course, this assumption flies in the face of common sense. One need only know of a miserable rich person in order to cast doubt upon its validity. So what gives?

The first thing to understand is that the doctrine of economic growth is sacrosanct in the mainstream paradigm that dictates how these “development” bureaucracies function.

The idea is that if the economy grows everyone will get richer and thereby become better off.

However, one obvious reality that has played itself out in the decades since this ideology has taken hold is that the rich have gotten richer much faster than the poor.

Simultaneously, the growth economy has eroded environmental quality on a massive scale worldwide.

How can we have an infinitely growing economy on a finite planet?

I have no idea – but try explaining this to a university economist or a World Bank bureaucrat and see how far you get.

The Birth of the GDP

The economic sacred cow of Western society since WWII has been Gross Domestic Product (GDP).

It was created in the Ã¢â‚¬Ëœ30s under the macroeconomic theory of John Maynard Keynes to gauge industrial output, which, at the time, was pretty much all going to fight the war.

GDP only measures the flow of economic value within an economy – it says nothing about the quality of that value.

GDP only measures the flow of economic value within an economy – it says nothing about the quality of that value.

For example, if I get in a car wreck and have to go to the hospital for injuries, and have to get my car repaired or buy a new one, this causes an increase in GDP, though clearly I am worse off for making these expenditures. 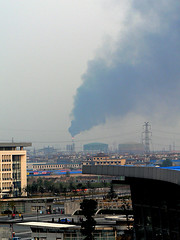 If our urban neighborhoods are continually degraded, resulting in even more poverty and desperation, and if more people purchase handguns for “protection,” GDP goes up.

If they build a new elevated interstate off-ramp next to my bedroom window and I have to buy soundproofing to defend against the noise and an air filter to protect myself from the additional pollution, GDP goes up.

If a young married couple has kids but can’t afford for one parent to stay home and raise them and they have to hire a nanny, GDP goes up.

National tragedies like 9-11 and Hurricane Katrina, because they require massive expenditure of human and physical resources to deal with their aftermath, cause GDP to go up.

If we clear-cut the entire state of Oregon and sell the timber for building more Starbucks coffee shops, Ikea furniture, and suburban tract homes (complete with gazebos), GDP goes up.

I could go on and on with all sorts of examples of what could be termed un-economic growth, but you get the point.

To take GDP as a proxy for well-being is lousy accounting because it counts everything in the plus column – it has no minus column for Ã¢â‚¬Ëœbads,’ such as expenditures necessitated by the breakdown of households and communities, or expenditures made to defend ourselves against the side-effects of economic growth.

GDP even counts depletion of natural resources as a “good,” even if it means they get wiped out completely. Thus British social critic John Ruskin’s characterization of GDP as “the gilded index of far-reaching ruin.”

Ecological Footprint calculations support this argument, as does the Genuine Progress Indicator, an alternative to GPD that relies on honest accounting of Ã¢â‚¬Ëœbads’ as well as goods. In Western countries, we’d all probably benefit greatly from economic shrinkage. 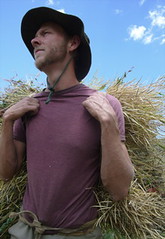 Certainly our children and grandchildren, not to mention the environment and pretty much every other species, would be better off if we started shrinking the economy ASAP.

But, again, try explaining this to a mainstream economist and see how far you get. My hillbilly mother back home in West-By-God-Virginia would say, “You can explain in one hand, and shit in the other, and see which one gets filled up first.”

So we come to your research project as an Ã¢â‚¬Ëœenlightened’ traveler: when you visit exotic places, try and observe what makes for real quality of life, for authentic well-being.

I’ve spent time among some of the “poorest” communities in the world: in the high elevation desert of Ladakh, in the upland forests of the Indian Himalaya, among the rice farmers of rural West Bengal and in the hill country of northern Thailand.

According to the “logic” of development economics, these communities, which are largely still self-supported by ancient traditions of subsistence farming, ought to be languishing in misery. 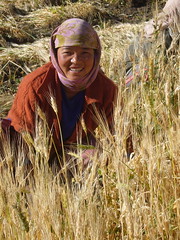 But my impression of these communities is that they are a kind of paradise.

Not perfect, to be sure. (What would that mean anyway, short of a return to the Garden of Eden?) But the people seem very happy, mellow, fit, and healthy, and they seem to get along with one another.

I haven’t witnessed a single case of road-rage among the adults or ADD among the children. To my knowledge, no one in any of the communities I have visited is suing anyone else.

And the food is very good – no, excellent in most cases – and plentiful. The farm animals know nothing of “confined animal feeding operations” (CAFOs), the sanitized term for factory farms.

People’s homes are comely and well made. Common resources, such as forests, are used respectfully and sustainably. And so on.

Why such a contrast?

Most of the economists, bureaucrats and policy wonks who would characterize these communities as “poor” and in need of “development” and “aid” have never actually been to any of these places – they probably spend all their time in air-conditioned offices in Western metropolises.

And all their professional training, which is highly ideological in character, has inhibited their faculties of common sense.

That’s why it’s your job to make a proper study of this Ã¢â‚¬Ëœwell-being’ thing, and work out which really are the most important ingredients of happiness.

We can see that the single ingredient GDP recognizes – money – has little to do with well-being. Integrity in familial and community relationships is very important, as are opportunities for meaningful work, having sufficient free time for creative endeavors, and enjoying a healthy surrounding ecosystem.

I’ll let you elaborate on this list and work out the details for yourself.

Once you have a sense of what makes for real, genuine well-being, we can all team up and try to de-school some economists and bureaucrats and help them back onto a course of civic responsibility, ecological sanity and economic sense.