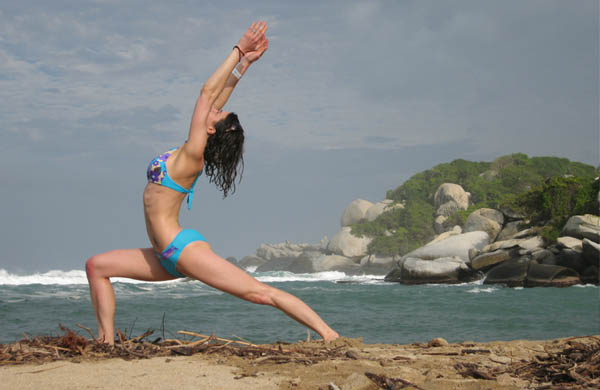 You might think yoga and travel don’t mix. But as Christine Mcnab reveals, you can pack your practice into surprising places.

“Anyone need help with a headstand?” our yoga teacher called out to the class.

“Yes please!” I replied. After practicing yoga for four entire days, I thought a headstand couldn’t be that difficult.

He came over to help me balance. I kicked my legs up and yes, sure, with his hands on my ankles, I could stand on my head. But as soon as he let go I flopped over, the full weight of my near six-foot frame crashed to the mat. OK, so it was a bit difficult.

That was in May 2008, on Koh Samui, Thailand during my first-ever yoga retreat.

It was also the beginning of a months-long world journey with my partner. While she had practiced for years, and many of my friends swore by yoga, I had never embraced it. The early 70s flaky veneer was still sticking to me.

At the retreat, I felt silly doing ashvini-mudras (you want me to contract what?) and couldn’t focus on single-nostril breathing. But as the week went on, the postures made me feel stronger and healthier.

I looked forward to the 7am meditation and yoga in the studio by the sea. I liked, sometimes even really loved, the evening classes where we learned more about yoga’s origins, and yes, talked about India and The Beatles.

By the end of the week I was determined to continue the practice.

The day we arrived back in Bangkok after the retreat, we bought yoga mats at the local department store. Shoved into our overstuffed bags, they endured eight months of travel over four continents.

In every kind of climate, at any elevation, on any surface, I could rely on my mat. We practiced at almost every stop on our journey.

In every kind of climate, at any elevation, on any surface, I could rely on my mat. We practiced at almost every stop on our journey.

This required dedication and a certain shamelessness. We rolled out our mats in the tiniest spaces. On a narrow balcony in Siam Reap, Cambodia, I had to be sure the low whirring ceiling fan didn’t turn my sun salutations into hospital hellos.

Staff at a hotel in central Thailand watched us practice, and with eyebrows raised commented “Wow, velly stlong!”

In a friend’s chilly yard in Nelson, British Columbia, we dodged dog poo and tried not to notice her tired and tearful two-year-old.

My arms, historically useful only for putting in sleeves, gained definition. My waist became firmer and twistier. My knee, long stiffened from surgery, could bend more than it had since my 20s. My back, prone to morning pain, was longer and stronger.

The simple act of drawing and exhaling breath fed an emerging spiritual centre. 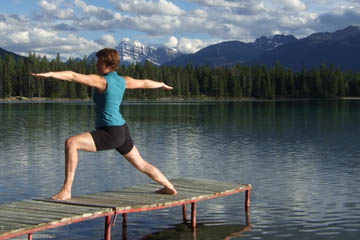 We practiced yoga in the most incredible places, where we could draw strength from the earth’s magnificent and sometimes frantic landscapes.

I did warrior pose on the pebbly shores of northern Canadian mountain lakes. I tried back bends in Phnom Penh, while tuk tuks puttered by. I reached for the sky in the late afternoon sun by the sea on Salt Spring Island.

I held downward dog on the deck of our riverside bungalow in northern Laos, the muddy red river Ou stretched out before us.

When we had to wait for road crews to clear on the Alaska Highway, I instinctively began sun salutations on the hot tarmac. While truckers looked on at me from behind their shades, I thought of all the bears we had seen that day on the roadside, deepened my breathing and pressed on.

I finished a series of standing poses just before the orange-vested flagmen waved us through.

Yoga was a solace to many of us in the days following the death of a dear relative. Family had an impromptu session together on a blue plastic tarp in view of Mount Edith Cavell in Jasper. We didn’t say a word, but instead bonded through the breath we silently dedicated to the wonderful woman we had lost.

Teachers In Every City

No matter where I was in the world, the yoga mat, my body, and the practice became home. When we needed guidance along the way we stopped into random studios for classes.

Bring a light mat and use it whenever you feel inspired.You’ll find a place to call home wherever you are.

One of the best teachers I’ve encountered ran a beautiful studio in Edmonton, a city best known for its massive shopping mall.

In New York, a lovely man named Jeremy taught us how to find stillness in a space overlooking the madness of Broadway. Jeremy also helped me with my headstand. After months of practice I could do one on my own, but only if no one was looking. In class I had a fear of falling on and crushing one of my lithe mat neighbours.

But Jeremy, with the lightest of touches, steadied my headstand, talking me through the posture. I listened to him, breathing, and held it on my own. I was grinning wide, convinced my headstand would last forever.

“Now come down gently,” Jeremy said, after several grueling seconds. I crashed onto my mat with a loud thump. There were giggles. I didn’t mind. I relaxed into child’s pose, breathing.

If you’re planning to travel, I recommend doing yoga along the way. If you don’t already practice, consider a course before you go. Bring a light mat and use it whenever you feel inspired.

You’ll find a place to call home wherever you are.

Need some yoga tips? Check out Simple Beach Yoga For Backpackers. And read an interview with another world yoga practitioner.

What are your tips/experiences for yoga on the road? Share your thoughts in the comments!

This map shows how weak US passports are right now
This small and remote Scottish island is looking for new residents
7 active volcanoes you can tour in Iceland
How Audacity Fest builds a community for travelers of color
Animals ‘reclaimed’ cities during the pandemic. What happens to them now?
✖
travelstoke
Download the mobile app
stoked by