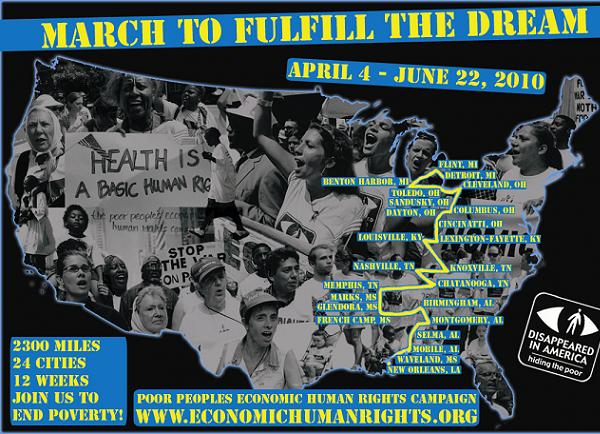 But it also marked the launch of a historic march from New Orleans to Detroit by the Poor People’s Economic Human Rights Campaign (PPEHRC) to resurrect Dr. King’s dream of ending poverty in the United States.

The March to Fulfill the Dream seeks to highlight the critical issues facing tens of millions of poor people in the United States, including lack of affordable housing, health care, and living-wage jobs.

The Poor People’s Economic Human Rights Campaign is a national coalition of over 125 grassroots anti-poverty groups; it’s also the largest led directly by the poor. But whereas the original Poor People’s Campaign traveled east to D.C., the March to Fulfill the Dream is heading north to Detroit.

Detroit is the site of the upcoming U.S. Social Forum, which 10,000 people from all over the nation are expected to attend. The city was chosen both because it has become a symbol as ground zero of the recession and because some of the leading examples of a creative new economy are emerging there.

Detroit is the face of some of the toughest economic statistics in the country—high unemployment, foreclosures, a gutted industrial base—an extreme case of what millions of people are facing across the United States.

New Orleans, in which the campaign will host actions for its first few days, faces similar issues, which were exacerbated after Hurricane Katrina.

Viola Washington, a New Orleans residents and Katrina survivor, said, “Dr. King’s dream is as relevant today as it was during his lifetime. More people than ever before are living in poverty surrounded by an unprecedented concentration of wealth and abundance. We are organizing to finally realize the dream of racial equality and economic justice in the United States.” Washington is with the New Orleans Welfare Rights Organization, a PPEHRC member group.

Along the way, the caravan will stop in two dozen cities where they will join local demonstrations and teach-ins. The campaign hopes to unite poor people’s groups and their allies from across the country to build a diverse and nonviolent anti-poverty movement.

“A few cities on the itinerary are significant for the role they played during the civil rights movement.”

A few cities on the itinerary are significant for the role they played during the civil rights movement. Marks, Mississippi was where Dr. King launched the original Poor People’s Campaign in 1967. Other cities with a link to civil rights history include Selma and Montgomery, Alabama, and of course, Memphis, Tennessee, where Dr. King was supporting striking sanitation workers when he was killed.

Why are ‘rights’ in the title of the campaign?

The PPEHR Campaign takes its inspiration not only from Dr.King, but from the U.N. Universal Declaration of Human Rights, which has at its core a set of social and economic rights (including housing, health care, and jobs) in addition to civil and political rights.

“The dispossessed of this nation — the poor, both white and Negro– live in a cruelly unjust society. They must organize a revolution against that injustice, not against the lives of persons who are their fellow citizens, but against the structures through which the society is refusing to take means which have been called for, and which are at hand, to lift the load of poverty.” — Dr. Martin Luther King, Jr., 1967

For information on the march, visit March to Fulfill the Dream.

Detroit may have made an appearance on the list of America’s worst neighborhoods, but Matador writer Katie Hammel shares several reasons why her hometown deserves some love in Detroit Is for Lovers.