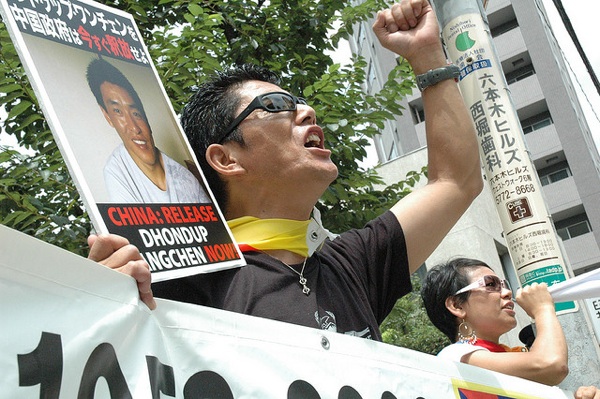 Every morning at 1 AM, Lhamo Tso bakes bread alone.

In the early hours of the morning, she will sell this bread on the main square of the Indian town of McLeod Ganj. This little town is famous all over the world for being the residence of the Tibetan government in exile and of the Tibetan community’s most known and respected member, His Holiness the 14th Dalai Lama, Tenzin Gyatso.

It is a colorful community made of displacement. Travelers abound, mixing with the Tibetan and Indian populations. If you look closely enough, you’ll see signs of protest everywhere: the ubiquitous “I Love Tibet” bags, organizations such as Students for a Free Tibet, and the Tibet Hope Centre. Recently, Lhamo Tso, the subject of this article, spoke at the organization, Learning and Ideas for Tibet. 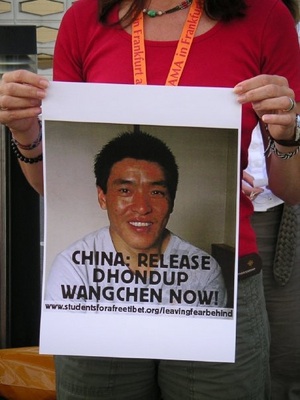 Lhamo Tso’s story is a microcosm of what lies behind the smiling faces of many of the Tibetan people travelers encounter in McLeod Ganj. Lhamo Tso’s husband, Dhondup Wangchen, was arrested by Chinese authorities in March 2008 for making a documentary film about Tibetans’ opinions of the 2008 Beijing Olympics.

He spent some time on a dangerous journey through Tibet, and was arrested along with his helper shortly after they successfully managed to smuggle the tapes of the extensive interviews he had conducted out of the country. He was charged with inciting seperatism and since his arrest his family have had no opportunity to see him or communicate with him. You can find out more about Dhondup’s exceptional film here.

Lhamo Tso is a remarkable woman, who independently supports Dhondup Wangchen’s parents, the four children she has with him, and a niece. She speaks clearly, with conviction, and relentlessly about her husband’s arrest, citing that he has committed no crime in documenting people’s opinions. She recounts that he has been denied medical treatment and legal representation by the Chinese authorities.

Dhondup Wangchen was kept in detention for two years, and finally sentenced to six years of imprisonment in January 2010. Two different Chinese human rights lawyers offered to represent him, following which both were threatened with the suspension of their licenses. Dhondup has been beaten, tortured, and has contracted Hepatitis B in prison, and has been transferred to a hard labour camp. Lhamo is fearful that he will not survive the ordeal, especially considering the fact that he is denied medical treatment.

The Tibetan Women’s Association has made a documentary about Lhamo Tso’s life, called “Lhamo Tso: Behind the Sea,” that you can watch here. Lhamo Tso and other women who have lost partners and family members need support. You can help to contribute to an international movement petitioning for the release of Tibetan political prisoners at Free Tibetan Heroes International pressure has been known to reduce the sentence of political prisoners, and your voice can make a difference. If you have a blog or a Facebook profile, you can help make a difference in Lhamo Tso’s life and in the lives of many women like her. Your voice counts, and people like Dhondup Wangchen and Lhamo Tso need you to speak out for them.

Want to learn more about Lhamo Tso and Dhondup Wangchen? Visit the Reporters without Borders website.

What NOT to do in Tibet