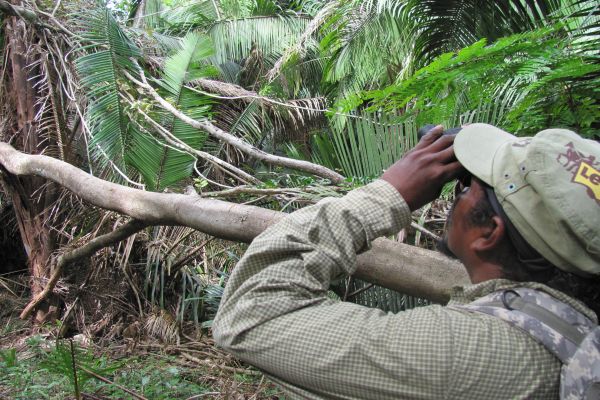 [Editor’s Note: Megan Kimble was a writer selected to travel with the Green Living Project to document environmental and community sustainability efforts in Guatemala and Belize. This is the first of several dispatches she is filing for Matador.]

Raymond Reneau has the soft gait of a hunter. “You smell that?” he asks. “A jaguar was here, must’a killed something. You smell ‘da rotting carcass?”

He pauses every ten feet or so, stooping down to examine the mulch-covered trail. This time, he’s spotted jaguar scat, and prods at it with the tip of his machete, looking for clues of the great cat’s last meal. Though Raymond hunted this forest for years, he’s no longer tracking jaguars, birds, and monkeys for game—he’s tracking them for the amusement of tourists, who pay tour guides like him for a glimpse into the biodiversity of this rainforest in northern Belize.

We’re walking along an old logging trail that loops through the Spanish Creek Wildlife Reserve, a 5,900-acre community-run forest preserve initiated and organized by the 250-person town of Rancho Dolores. In the thick shade, we meander under second-growth mahogany and logwood trees—the lucrative hardwoods that first brought British settlers (pirates) to Belize in the 1600s. We stop at a tree marked Billyweb.

“It’s named after a guy named Billy,” says Raymond. “He had, what’s it called, he had athlete’s foot, so he put ‘da leaves on his feet to cure it. His friends say, ‘Billy, now you got a web on yo’ feet!’” 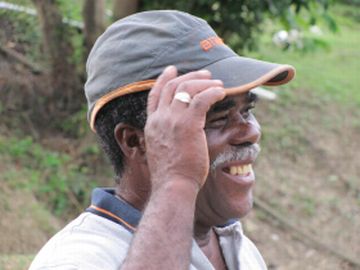 Though Raymond grew up hunting in this forest, he says he and other locals were always conscious of their impact; after all, they depended on the forest for survival. But, when hunters and loggers from outside the community swooped in—killing, cutting, and leaving without regard for the forest—the community realized its backyard—and livelihood—would soon be gone.

So, in 1998, they went to the government of Belize and asked to put their entire forest in a wildlife reserve, a designation that earned the access to protected lands funding from NGOs like PACT (Protected Areas Conservation Trust). “We got to change our way of life,” says Raymond. These funds were used to train tour guides like Raymond; others got jobs as rangers, bed & breakfast hosts, and handicraft artisans.

With only 300,000 people dispersed in small towns throughout a country the size of Massachusetts, a disappearing forest isn’t something Belizeans can ignore. Indeed, when they gained independence from Britain in 1981, some of the first laws passed were geared towards conservation.

Today, Belize retains 72 percent of its forest cover—one of the highest ratios in the world.

Conservation has been so successful because Belizeans value their natural resources, and because these unique natural resources (Belize’s abundance of rare wildlife) bring tourists and income. Eighteen percent of Belize’s GDP comes from tourism—from tours like Raymond’s, as foreigners pay for the chance to track jaguar scat or angle for rare birds.

Flavia Cueva is working in her community in Honduras to create a more sustainable Copan Ruinas. They are making so much progress there that Cueva was awarded the Premio Copan for her work.

Tagged
Activism Belize
What did you think of this story?
Meh
Good
Awesome

Belize will reopen to tourists on August 15

4 caves to check out in Cayo, Belize

The music of Belize

A quick guide to speaking Kriol in Belize

How to become a good caver

Photo essay: How to make a Garifuna drum

What it takes to be a travel guidebook author: Conversation with Lily Girma

Go to Belize for the beaches but stay for the culture, nature, and history