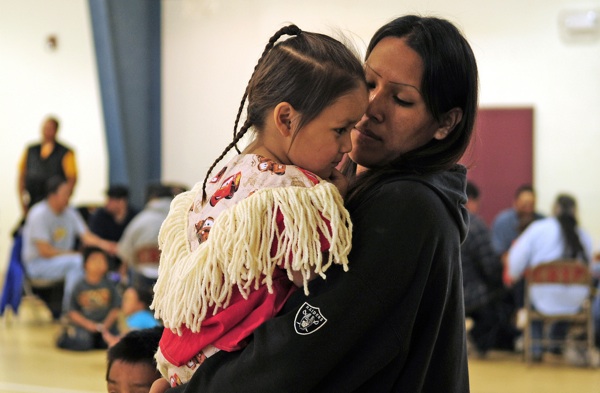 Last winter, we reported a story about American Indians failing to receive help they needed desperately after a winter storm. Unfortunately, Cathey Franke reports, it’s another hard winter on the reservations.

Lakota Sioux in the Dakotas, which include the Cheyenne River, Pine Ridge, Standing Rock and Rosebud reservations, are faced with the aftermath of fierce winter storms that have cut off water, heat, electricity, and food supplies.

Not yet recovered from debilitating storms in October and November, the tribes endured more storms last week, knocking out the tenuous infrastructure in some of the poorest communities of the nation.

Utilities aren’t expected to be up and running for weeks, or even months, and temperatures are already in the sub-zeros. Adding to this grim situation is another cold front projected to hit the area soon.

Unfortunately, little is mentioned in mainstream media about recent events. While Haiti is still, understandably, a headline story, a dire situation is worsening with few people giving it notice.

And dire isn’t exaggerating. Statistics for the reservations are dismal, commonly obscured from daily–or even occasional– exposure.

Pine Ridge, in Shannon County, South Dakota, is the poorest county in the U.S. The average population is 40,000 people, the homelessness rate is 80% – of which 50% are under 18. Unemployment ranges between 80-90% and 1/3 of homes do not have electricity or water. Infant mortality rate is 20 times higher than the national average. Teen suicide is so high that a state of emergency was declared in November, and about 60% of teens eventually drop out of high school.

The Rosebud Reservation lies within Todd County, the fourth poorest county in the U.S. 93% of Lakota children live below the poverty line and fewer than 50% have access to transportation. A majority of the households are single-parent homes, and unemployment hovers around 94%.

“Nobody… should have to burn clothes for heat.”

All tribal emergency funds are exhausted, and though a trickle of coverage is flowing through social media outlets, only $450 was raised on the first day for medical costs and emergency services.

Tens of thousands of residents are spread over 2.8 million acres on the reservations, making it difficult for scarce resources to arrive quickly. In the October blizzard, residents were found burning clothes for heat while waiting for wood.

Nobody, least of all in the U.S., should have to burn clothes for heat.

Shelters are presently in place to provide immediate assistance for the elderly, sick, and children, but with just a handful of generators, 11 tribal police, and much of the fuel and groceries provisions depleted, much more aid is needed.

What You Can Do to Help

Or to make an online donation, you can donate through One Spirit, a non-profit organization working on Pine Ridge with several projects. This is a great group of volunteers that I have personally been involved with for the last several years and through which I sponsor three children.

And, of course, please spread the word! I saw miracles unfold in the Haiti aftermath, and there is no doubt in my mind the same could be achieved here.

Learn more about the Dakotas in Top 10 Spots in the Black Hills of South Dakota.

Tagged
News South Dakota, United States
What did you think of this story?
Meh
Good
Awesome

Dutch government recommends single people have a sex buddy during the lockdown Japan will partially pay for domestic travel so you can explore more of the country Stonehenge will livestream its summer solstice celebration for the first time ever Get paid $20,000 to drink beer and hike the Appalachian Trail New Zealand prime minister suggests four-day workweek to boost tourism