IN THE MONTHS BEFORE the Women’s March on Washington, the event received some criticism that predicted it wouldn’t be as diverse as it should be. Fair enough, feminism does have a history in excluding women of color. And in its early stages, the march was planned by a white woman activist, Bob Bland, before a pressing cry for diversity urged her to include women of color as organizers. Bland wholeheartedly agreed, and Tamika D. Mallory, Carmen Perez and Linda Sarsour joined with her to organize the march.

When I pulled up in a bus filled with Maine women, I honestly didn’t know what to expect of the march in terms of diversity. We were all white, traveling from a small island community — the fact that we weren’t a very multicultural group is just the reality of where we’re from. But thankfully, even that reality is shifting in the 21st century.

But I can tell you that after marching all day, in a crowd of more than 1 million, I saw significant unity. (Other marchers didn’t.) This diversity wasn’t just shown in people of different cultures, it was shown in people of different ages, carrying signs that urged us all to consider a diverse range of issues. It wasn’t uncommon to see three different generations of family members marching together. Or to see a white or Latina ally holding a Black Lives Matter sign. I saw signs that stated: “I am not free unless you are free.” And heard chants that cried: “No hate, no fear. Immigrants are welcome here.”

I saw the Women’s March on Washington as a true show of solidarity, and I have never been part of something so empowering and teaching. I felt privileged to be there, to be able to march alongside women who live a completely different life than I do and to speak with and learn from them.

Here are some photos that I took of fellow marchers. I hope they can offer a face for the concerns and issues that many of us share when we think about the next four years. Possibly, they’ll offer a new definition of feminism in the year 2017 — a feminism that is multicultural and welcomes us all to come together in the common belief that women’s rights are human rights. 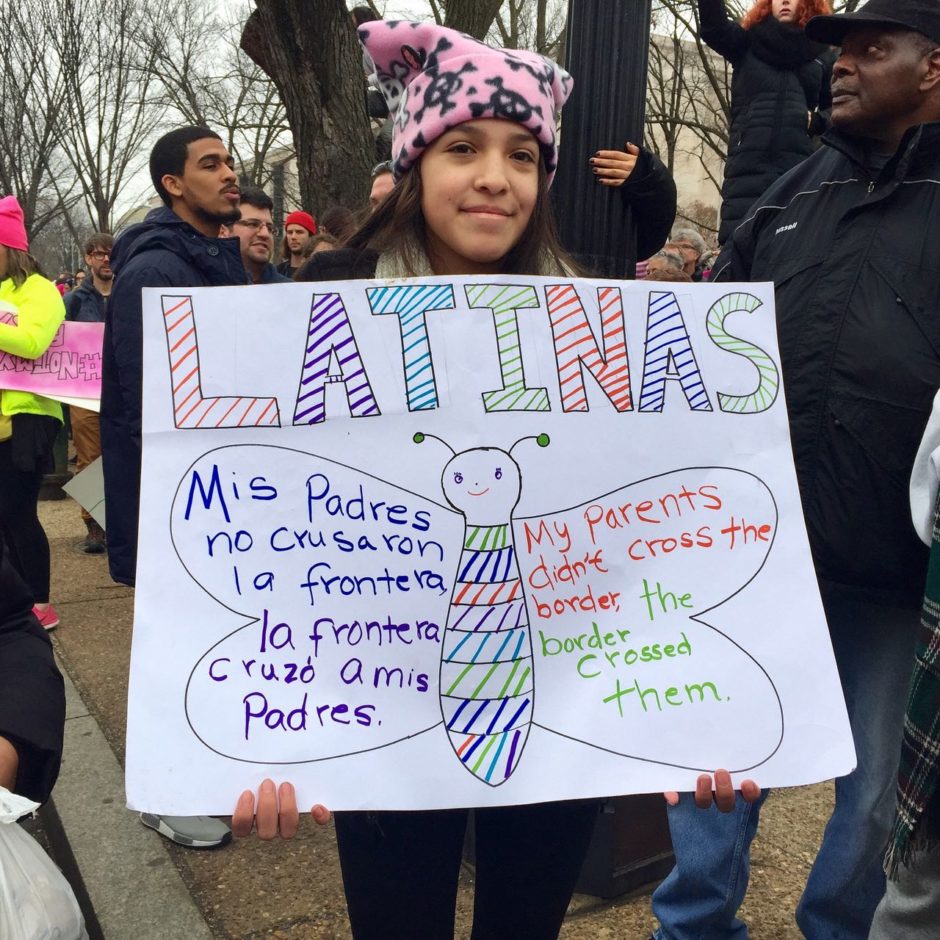 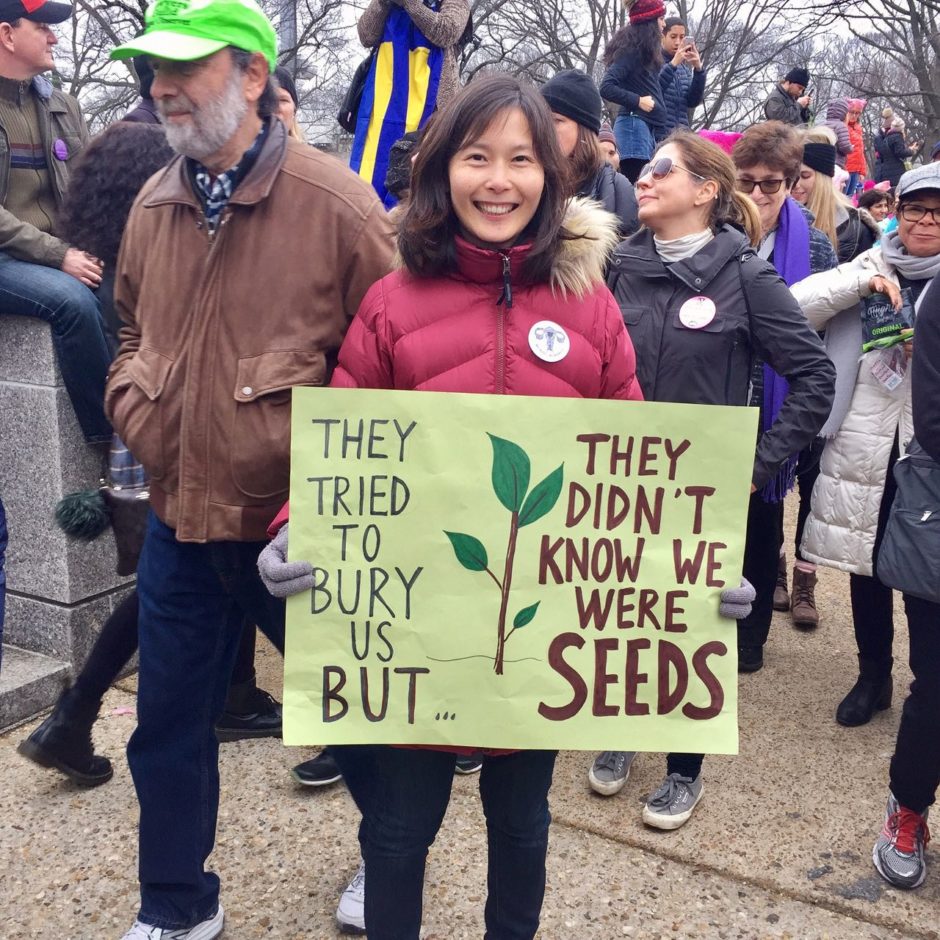 This woman marched with a message of hope. "They tried to bury us, but they didn't know we were seeds" is a Mexican proverb. 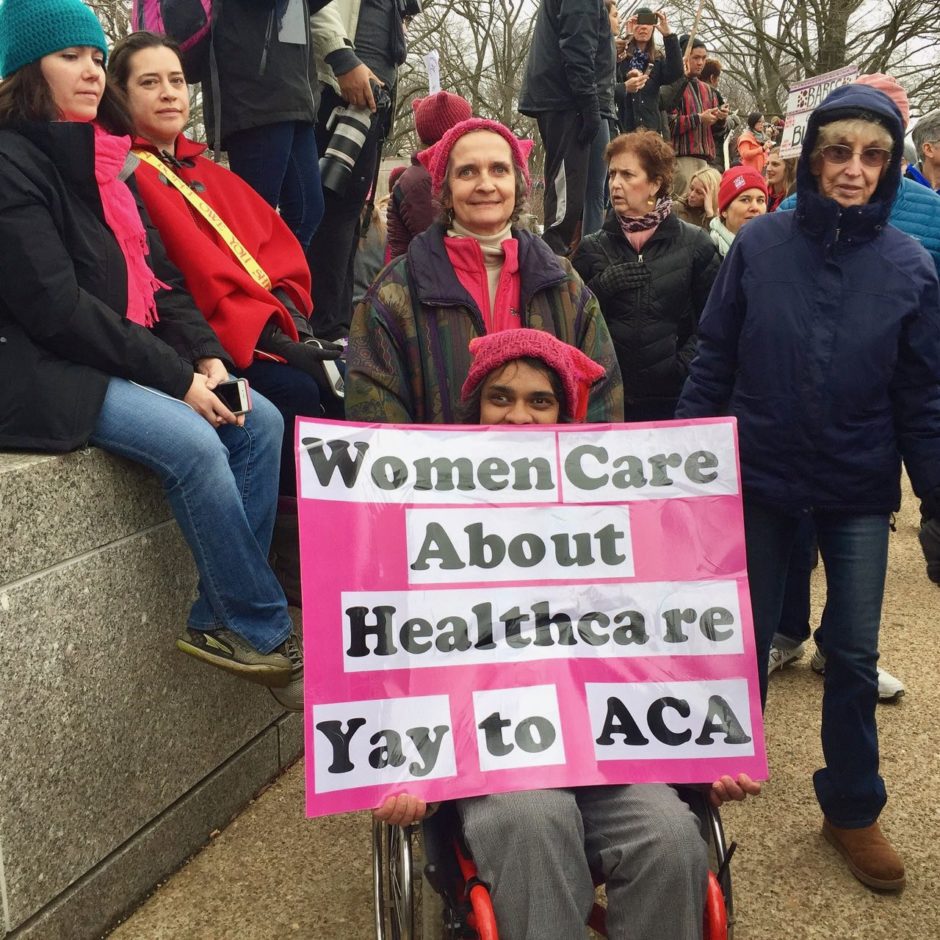 The Women's March on Washington was the largest assembly of people with disabilities in U.S. history. Those who were unable to make it to D.C. to participate were invited to meet online through the Disability March -- an event sponsor. 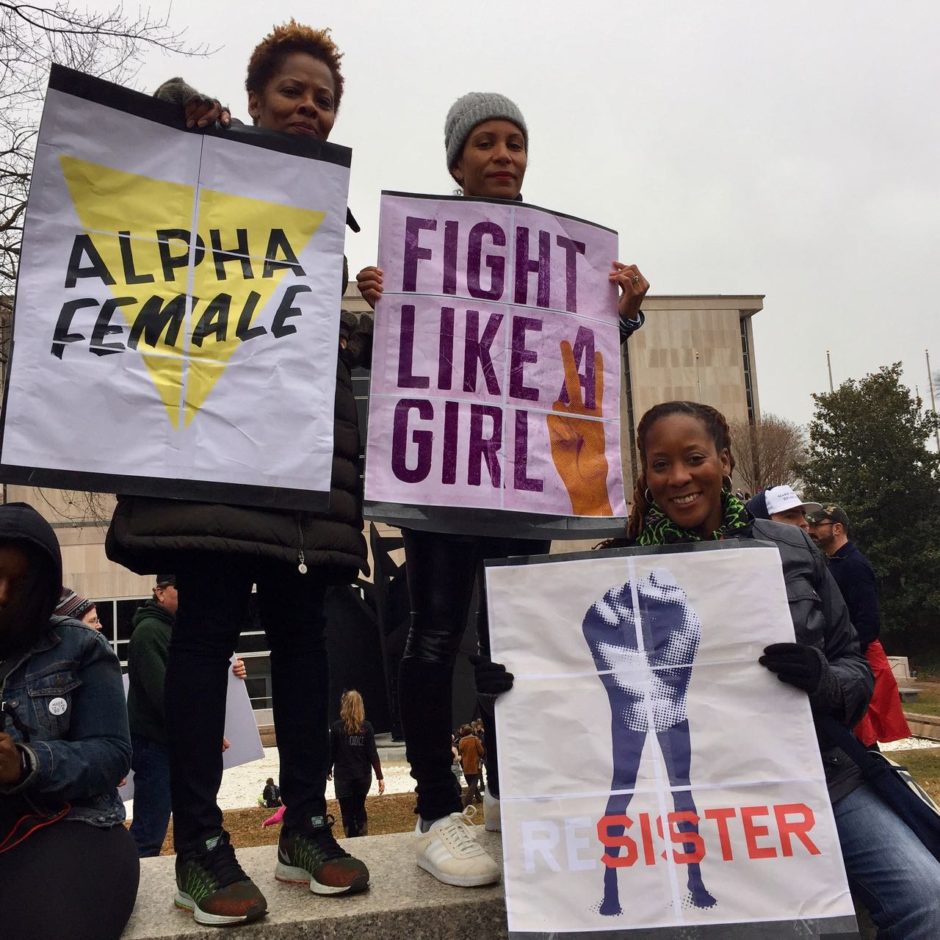 These women stood as a group, calling out to a white woman with a sign that read "Black Lives Matter" that they'd like a picture with her. 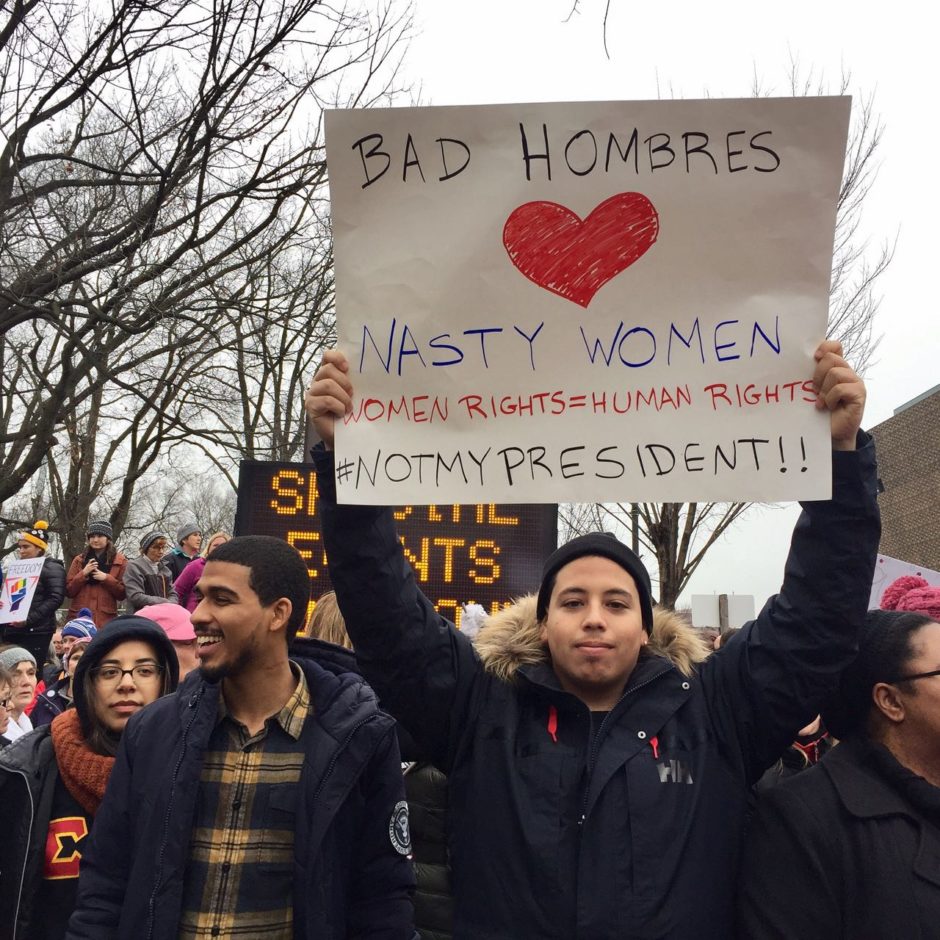 During the final presidential debate, President Trump claimed that we have some "bad hombres" in the United States and we need to "get them out." This is one of them, sticking up for the "nasty women" in his life. 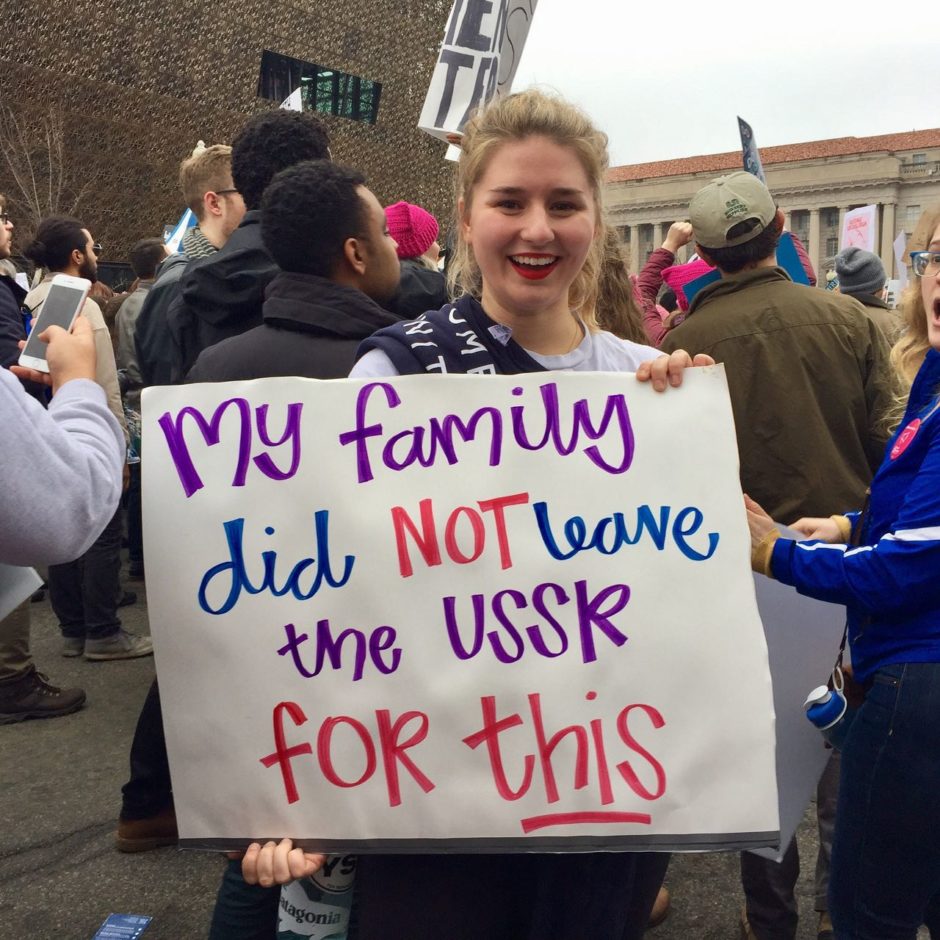 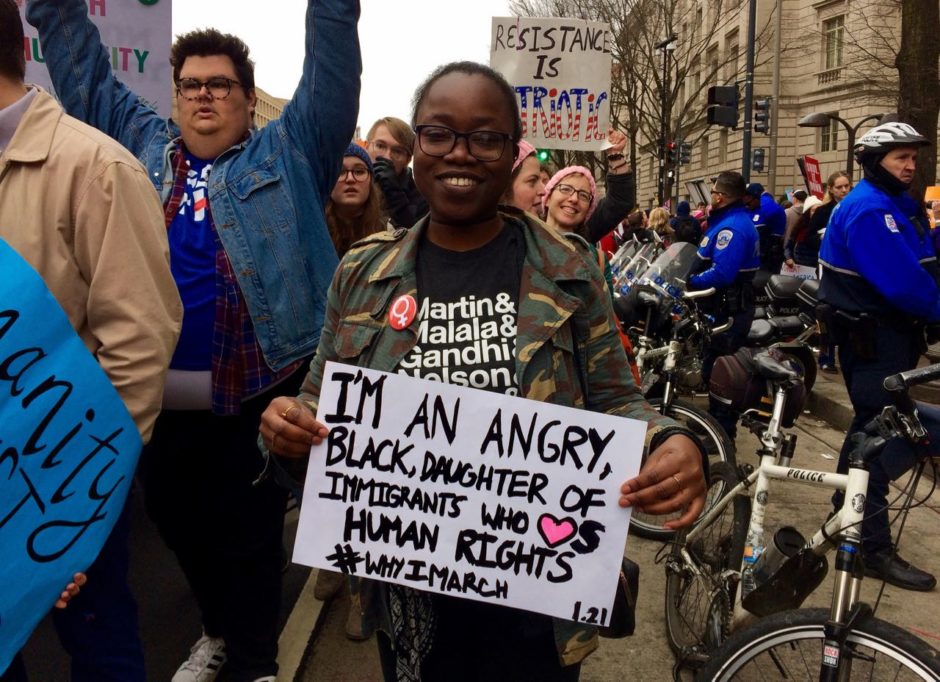 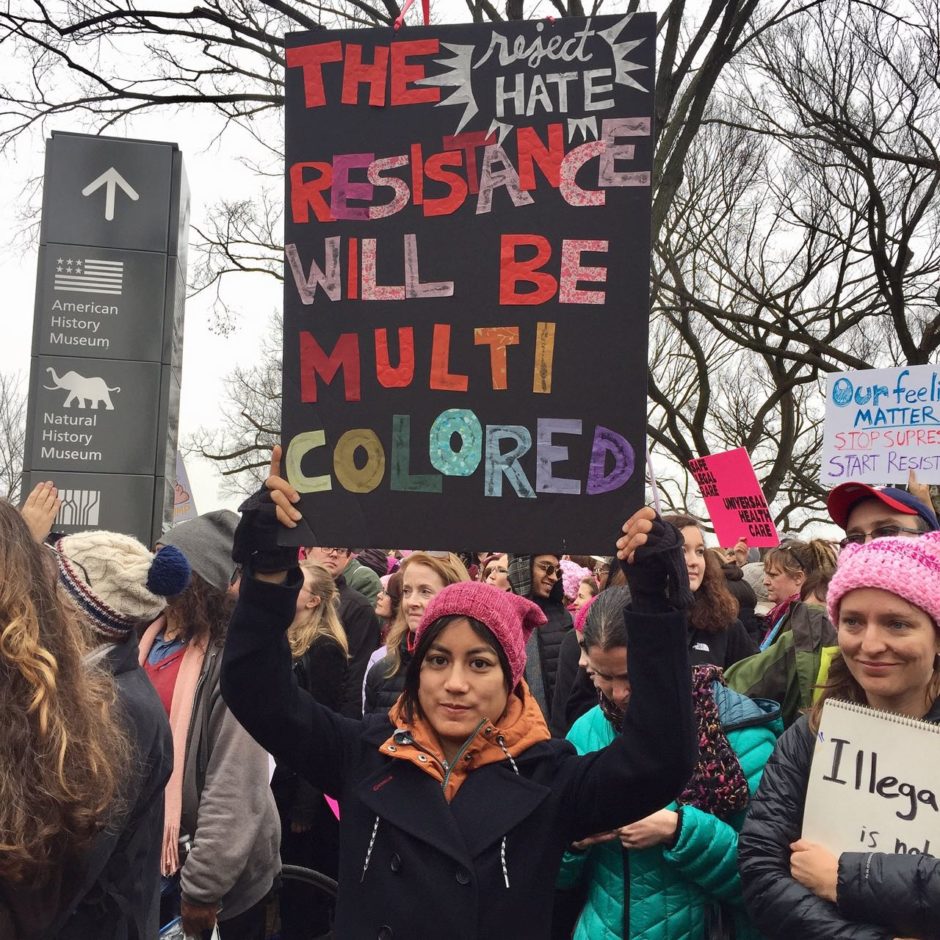 This woman carried a sign that reminds us that the resistance of hate needs to include people of all backgrounds and cultures -- no one culture can do it alone. 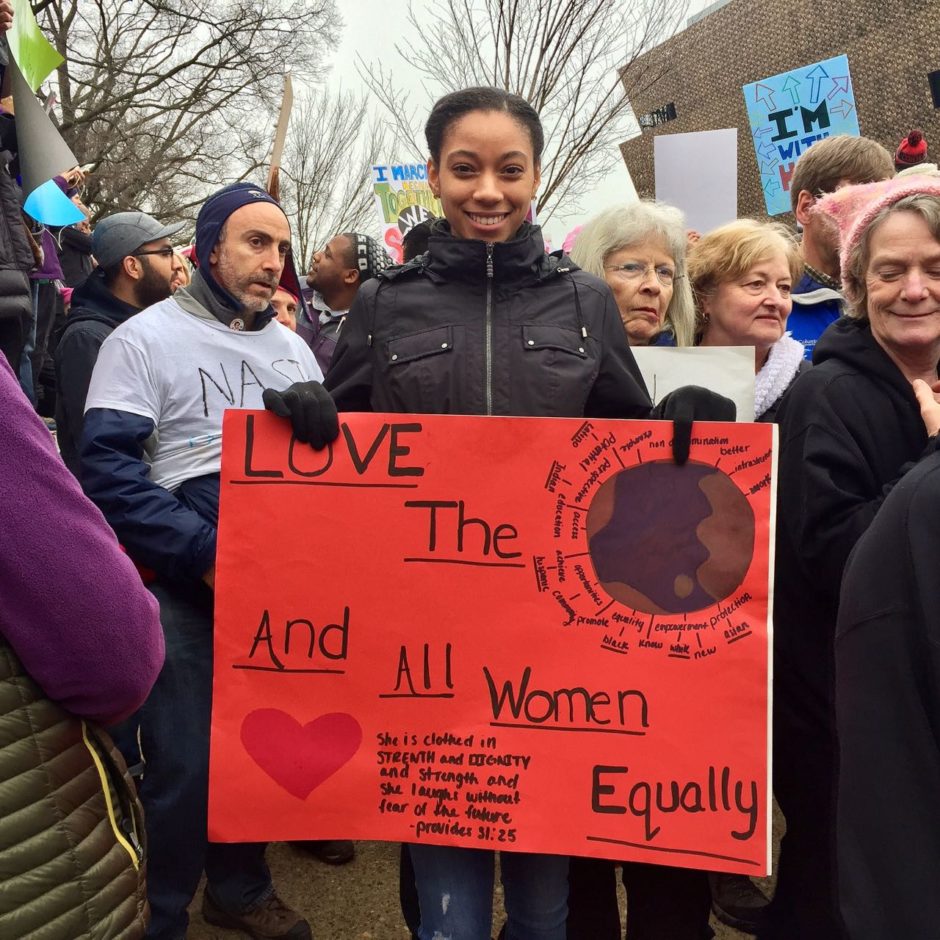 This woman beamed when I asked her to pose with her sign. It reminds us of Proverbs 31:25, "She is clothed in strength and dignity and she laughs without fear of the future." 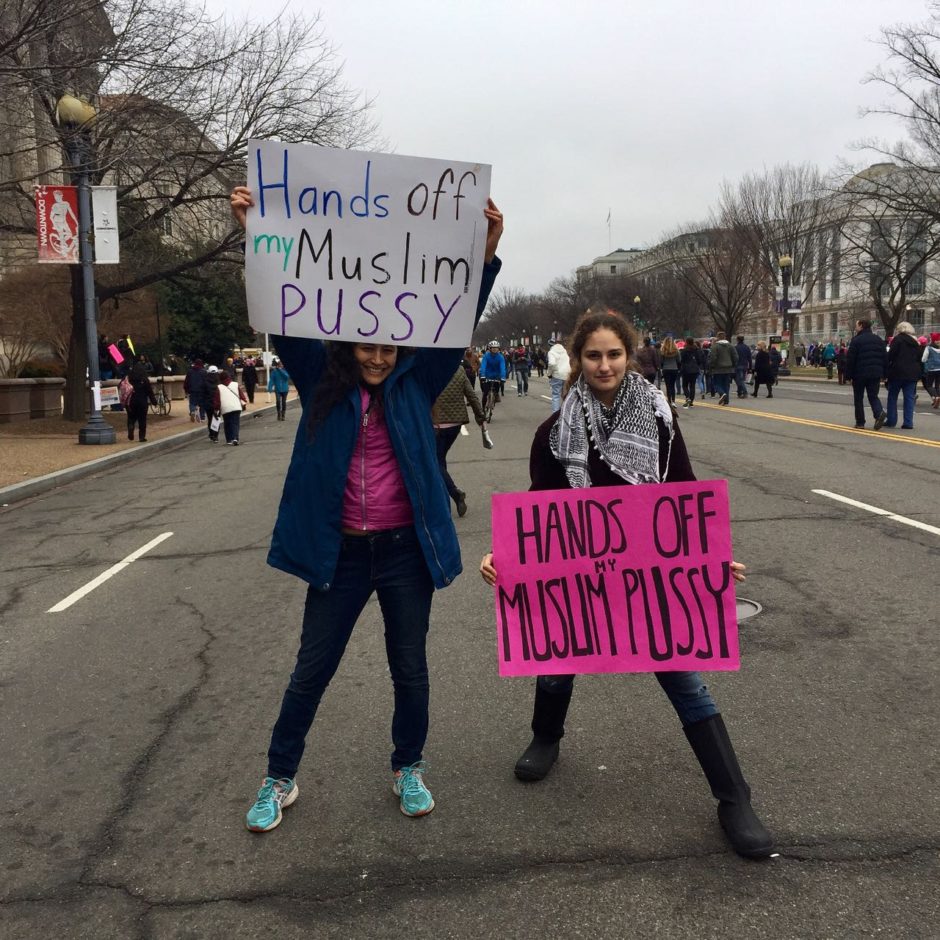 Feminist icon and journalist, Gloria Steinham spoke at the Women's March on Washington, calling to President Trump: "If you force Muslims to register, we will all register." During his candidacy, President Trump claimed that he would implement a database that tracked Muslims in the United States. He also called for "a complete and total ban" on Muslims entering our country. 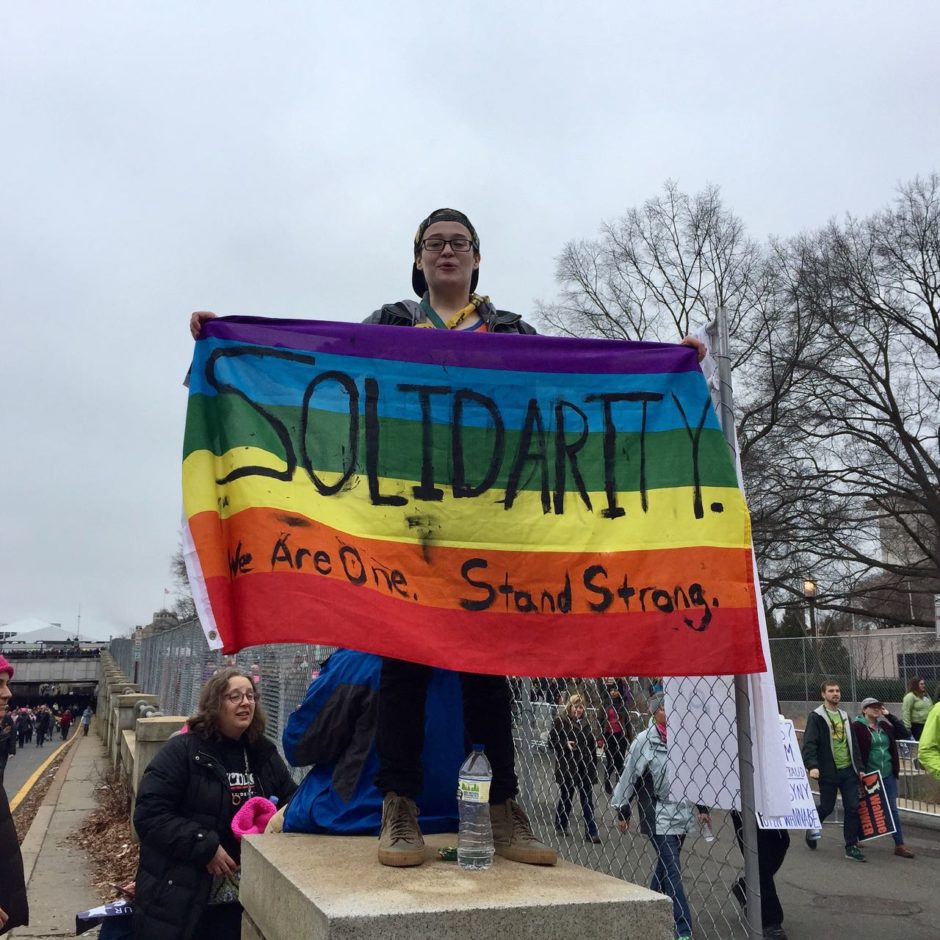 This woman stood with a flag, urging people to stand with the LGBTQ community as allies. She mentioned that at least 80 people had stopped to take her photo throughout the day. 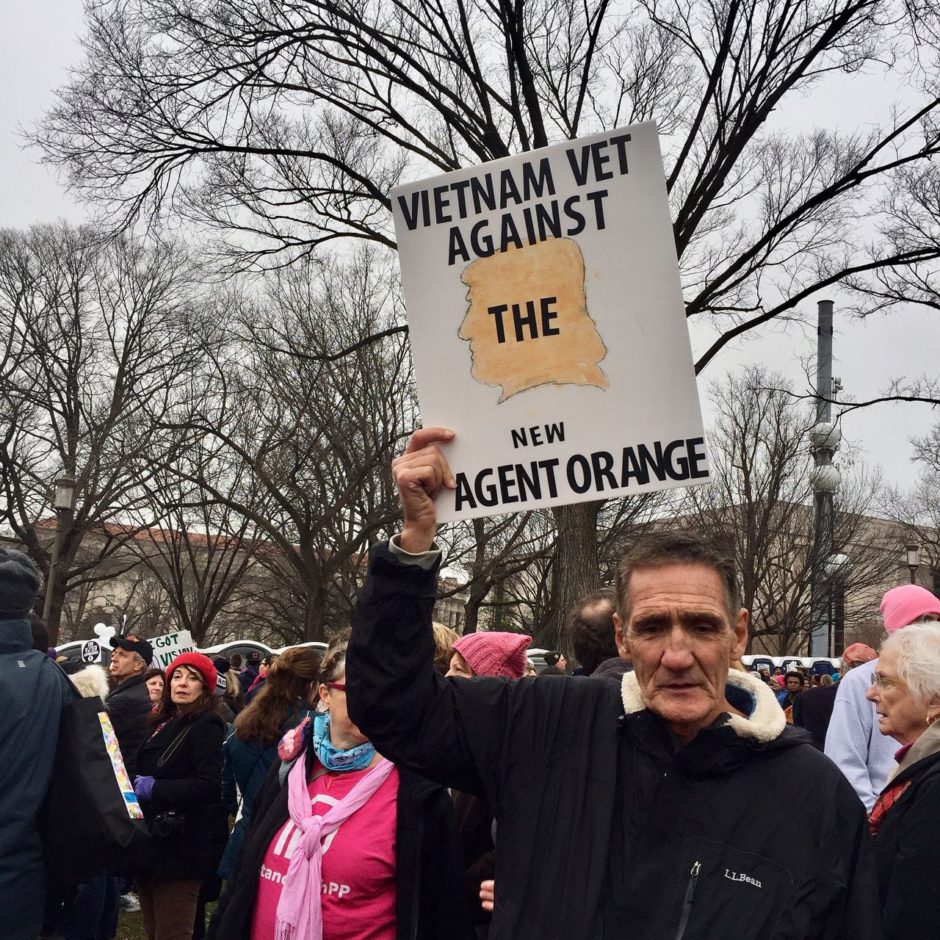 Veteran homelessness decreased by 47 percent under the Obama Administration. You can ensure that the statistics continue to fall by urging any landlord or business owner who you know to target local veterans for job and housing openings. And if you know a veteran, reach out to them whenever you can -- more than 22 U.S. veterans are lost every day to suicide, plus one active duty soldier. It's not enough to put a 'Support our Troops' bumper sticker on your car. 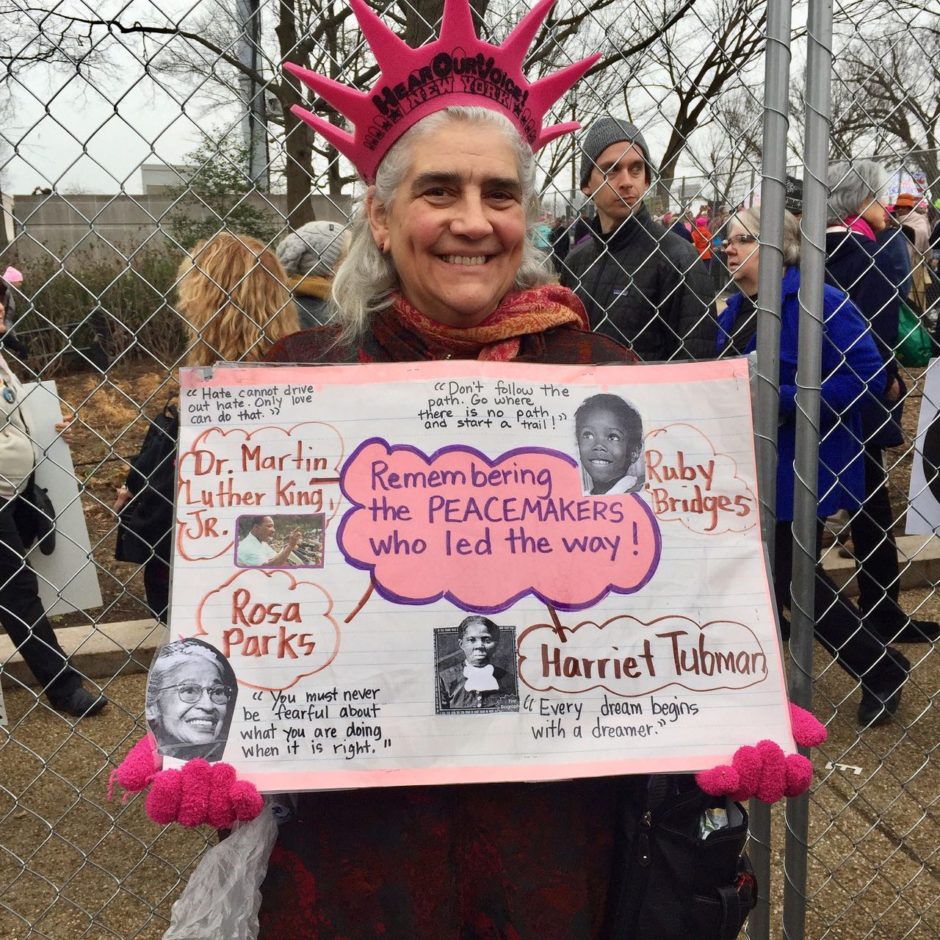 This woman stood with a sign reminding us all of the peacemakers who came before us. Dr. Martin Luther King, Jr. -- a Baptist minister and crucial activist for the 1960s Civil Rights Movement. Ruby Bridges -- best known as the first black child to attend an all-white school in Louisiana, during the 1960 New Orleans school desegregation crisis. Harriet Tubman -- an abolitionist and American spy who helped enslaved families escape through the Underground Railroad. And Rosa Parks -- known for refusing to give up her seat in the 'colored section' of a Montgomery, AL bus to another white passenger, and being arrested because of it. 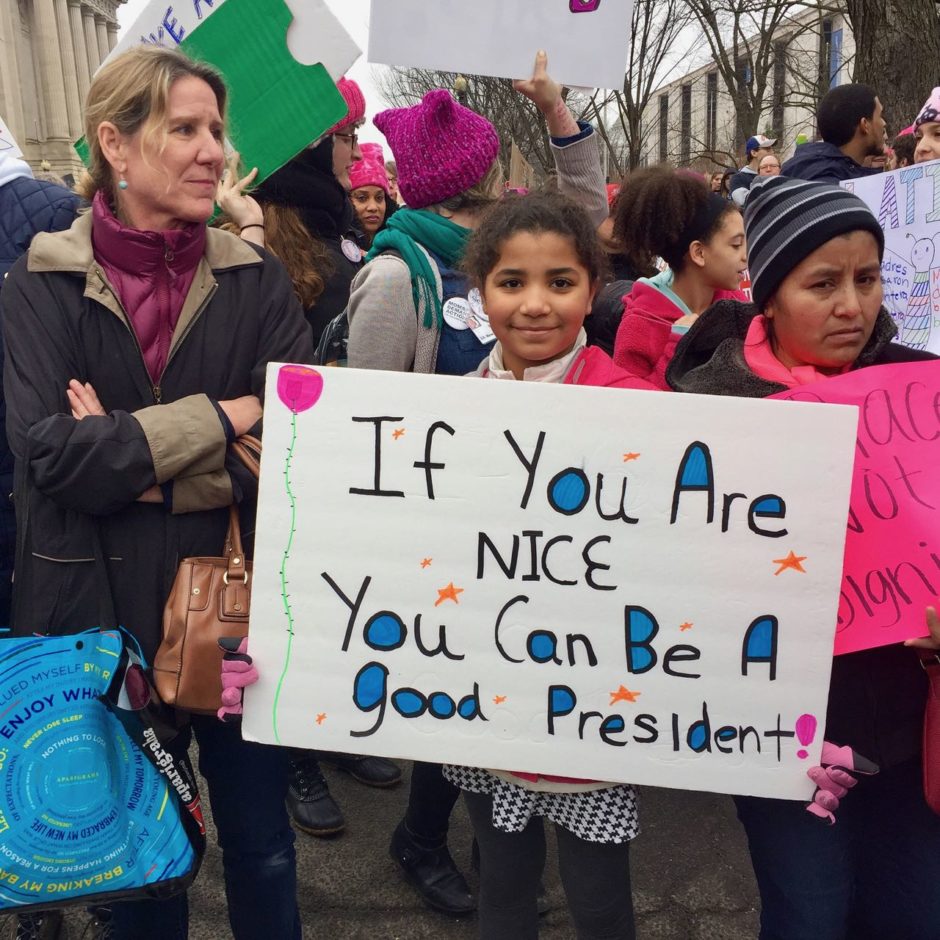 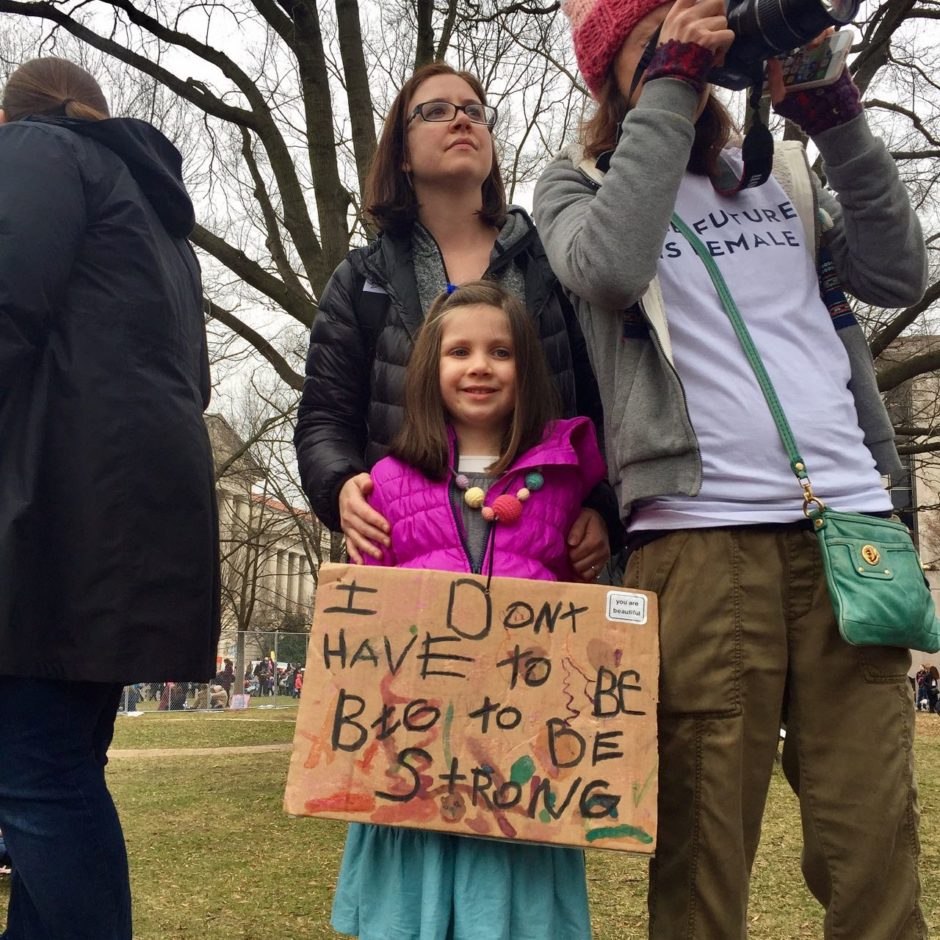 This young woman stood with her parents on the sidelines of the march with a sign that she made herself. 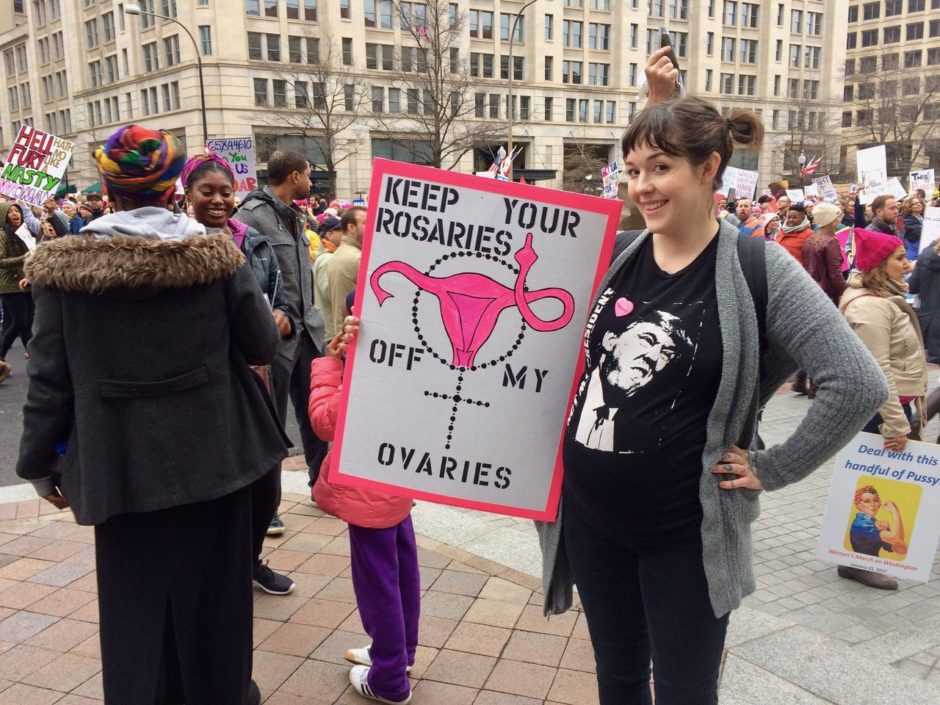 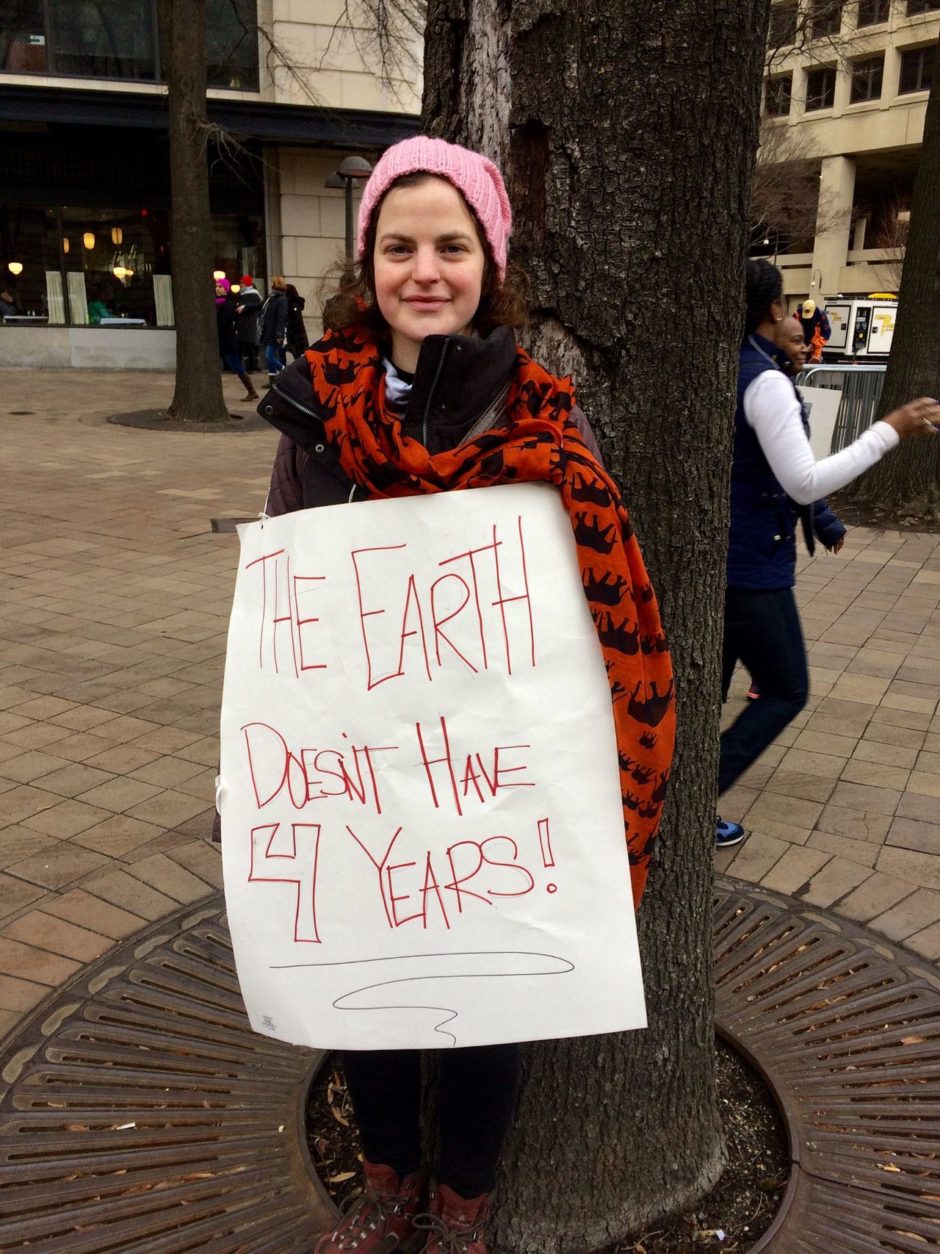 Last year was the hottest year that has ever been recorded. The month of September historically offers the lowest carbon dioxide levels in our atmosphere. However, in Sept. 2016, carbon dioxide levels failed to drop below 400 parts per million -- a number that represents 'the point of no return' for climate scientists. There's still hope if we act fast, though. You can urge your two senators to block President Trump's EPA nominee, Scott Pruitt, a climate change skeptic, by calling 202-225-3121 and giving your the operator your zip code.

Tagged
Travel Washington, DC, United States
What did you think of this story?
Meh
Good
Awesome