PROTESTS IN SUPPORT of the Occupy Wall Street movement that began in New York have been growing in Seattle over the last few weeks. I can hear them, and occasionally see them, from my apartment, but until yesterday I never joined in. While I applaud those who voice their opinions through civil disobedience, I (and many others, it seems) was unclear on exactly what they were protesting.

I headed to Westlake Center for Occupy Seattle‘s planned march Saturday evening. Signs and statements ranged from reasonable to comical to Communist. I didn’t agree with everything I heard and saw, but that’s not the point. The point is when this many people ranging so drastically in ages, religious beliefs, political beliefs, occupations and personalities come together because they feel something is wrong, it’s probably worth paying attention to what they have to say. 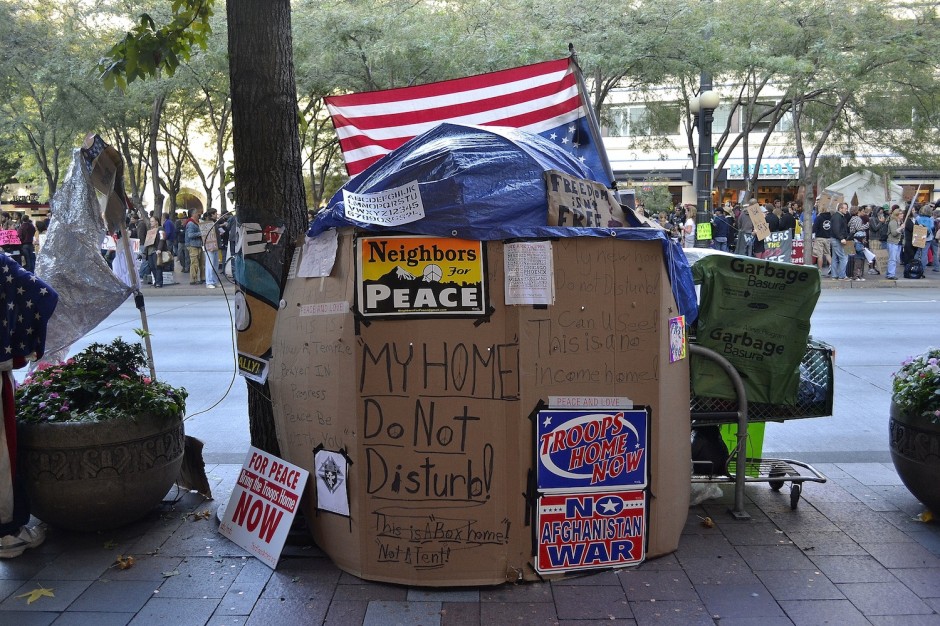 In response to the city regulations stating that structures such as tents, tarps and even unattended umbrellas are not allowed in Westlake Park, one protestor has set up a "box home" directly across the street from the park. Occupy Seattle is encouraging protestors to call the mayor's office and insist they be allowed to protect themselves from the rain, as sleeping under the awnings is also forbidden. 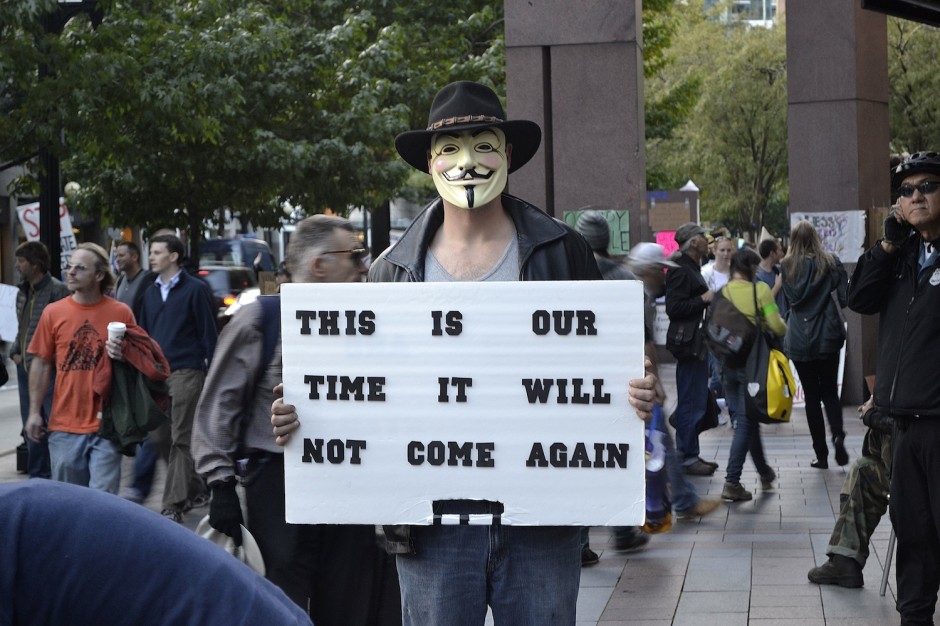 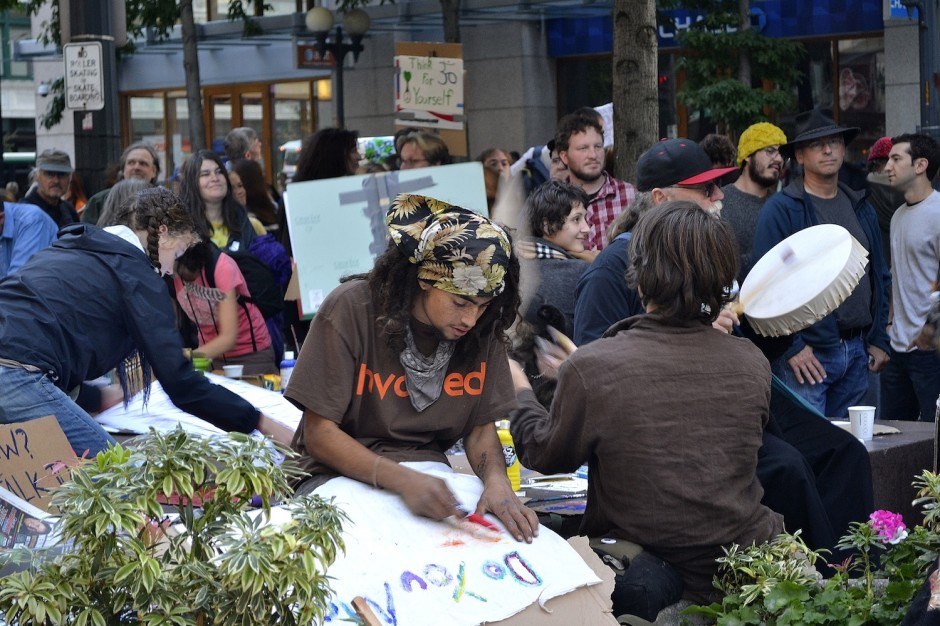 Minutes before the march began, protestors prepared signs to hand out to newcomers. 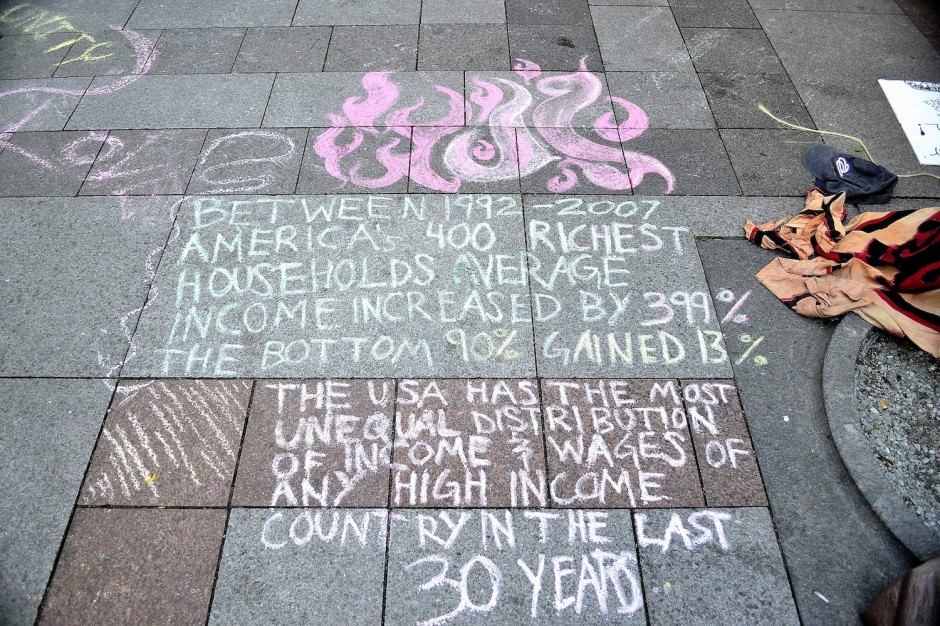 Crowds began gathering Saturday morning at Westlake Park for a rally at noon. When the march began, many left behind messages in chalk on the ground. 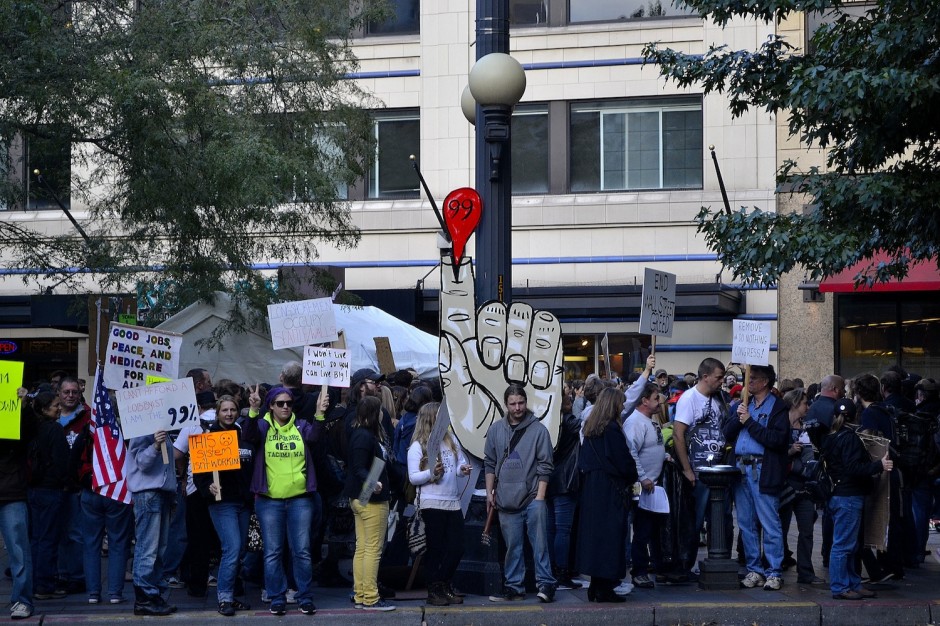 The march started at 5pm with chants of "They say cut back, we say fight back." Protestors headed down 4th Avenue, keeping to the sidewalk and obeying traffic lights. 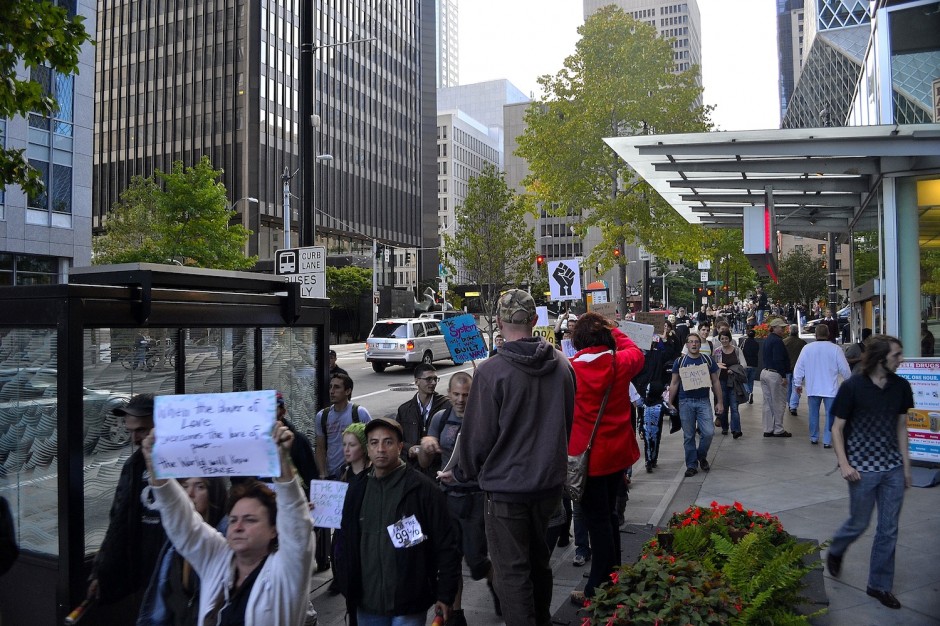 Protestors marched through the financial district and past the public library before turning left on Marion, heading for the Columbia Tower. 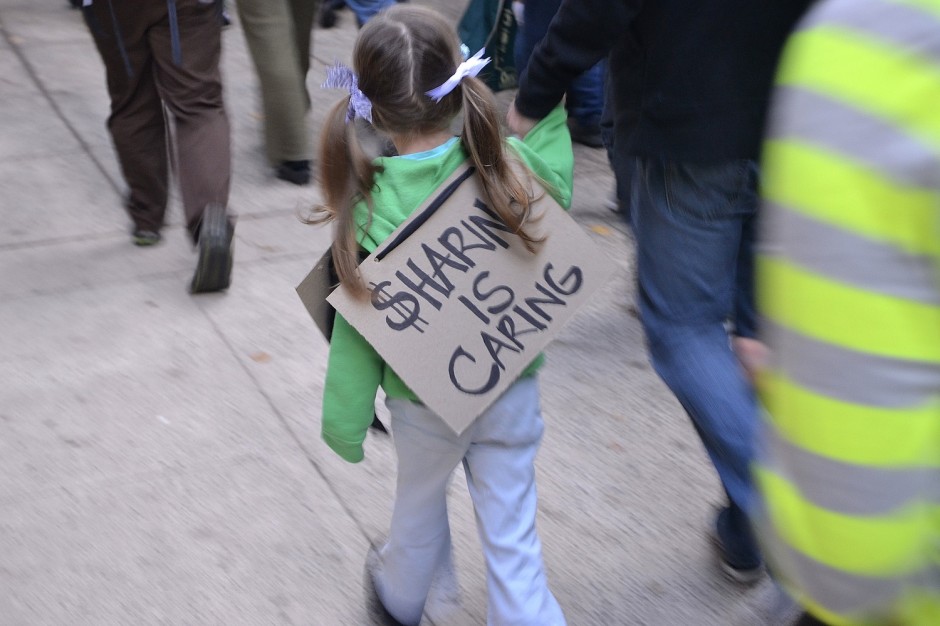 Many parents brought their children, some carrying signs, others sitting in strollers festooned with banners and ribbons. Later, protest organizers asked that parents remove their children from the sit-in when police began calling for back-up. 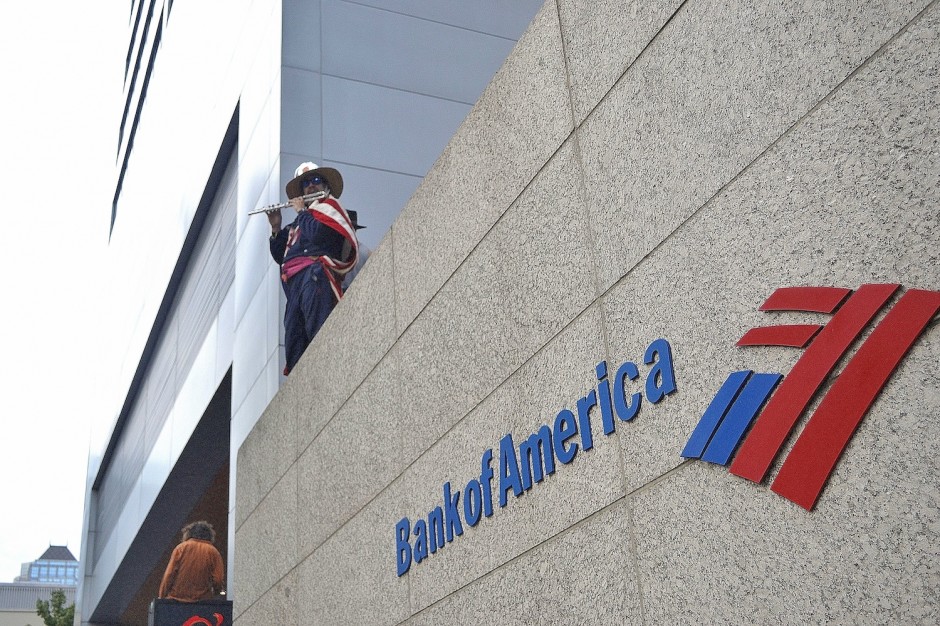 The march stopped at the Bank of America 5th Avenue Plaza. Some protestors gathered around the front of the building, while others followed this anonymous "pied piper" up the escalators to the second level patio. 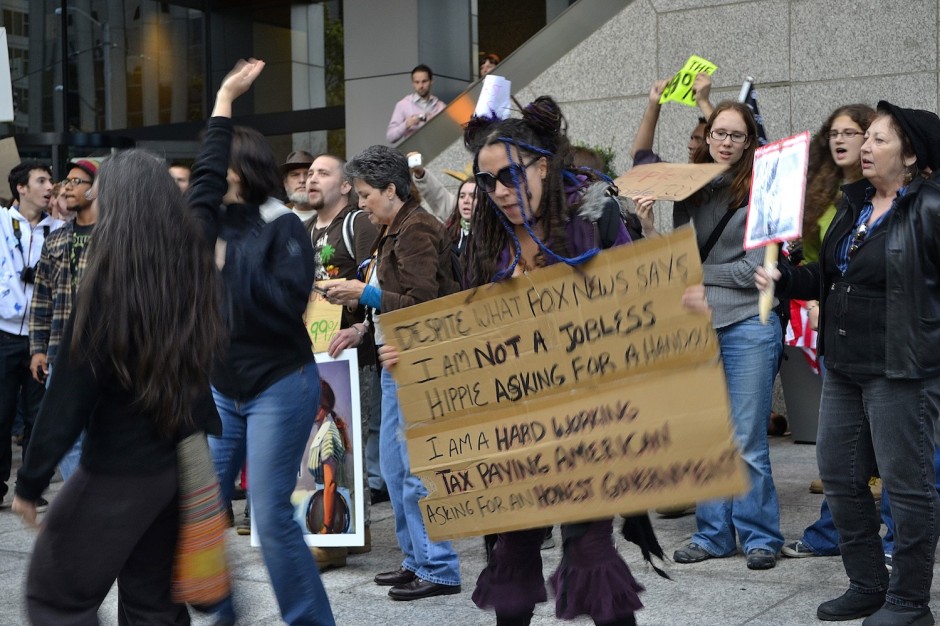 The atmosphere turned festive, with a small group of protestors playing drums and guitars while others danced. 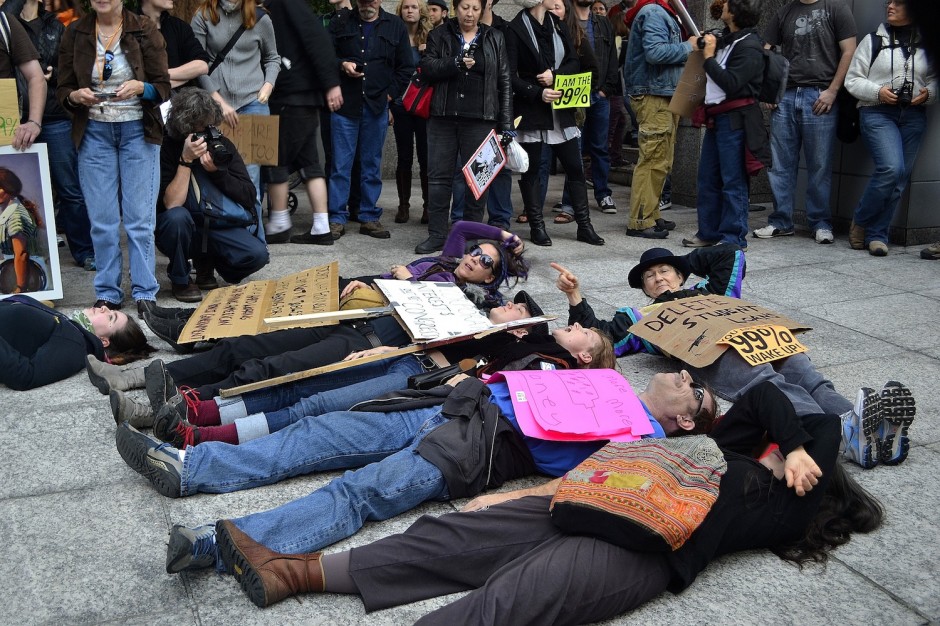 One group lay down in protest, while others chanted "banks got bailed out, schools got sold out." 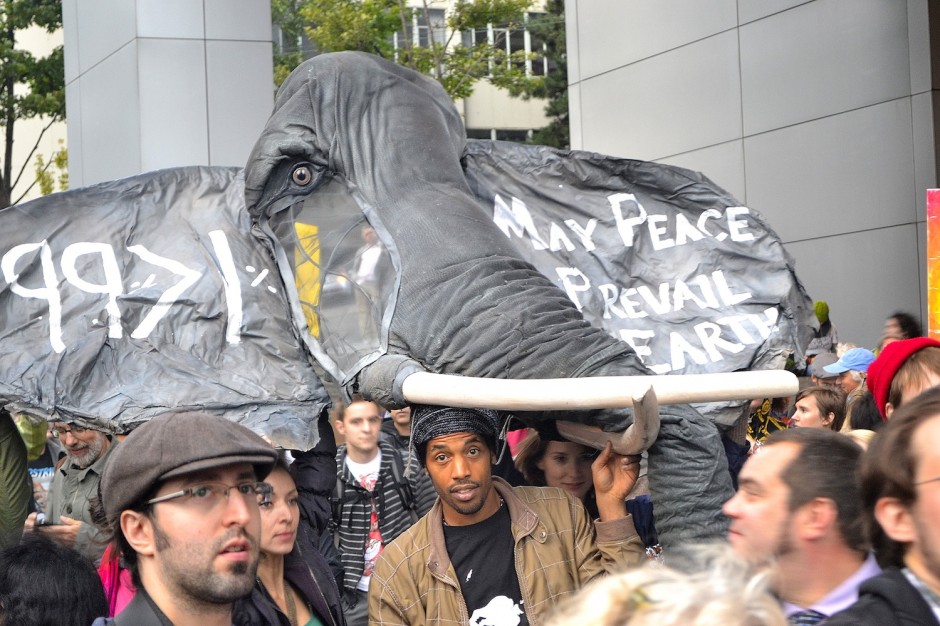 A Republican elephant head made an appearance, "99% > 1%" taped to one ear and "May Peace Prevail on Earth" taped to the other. 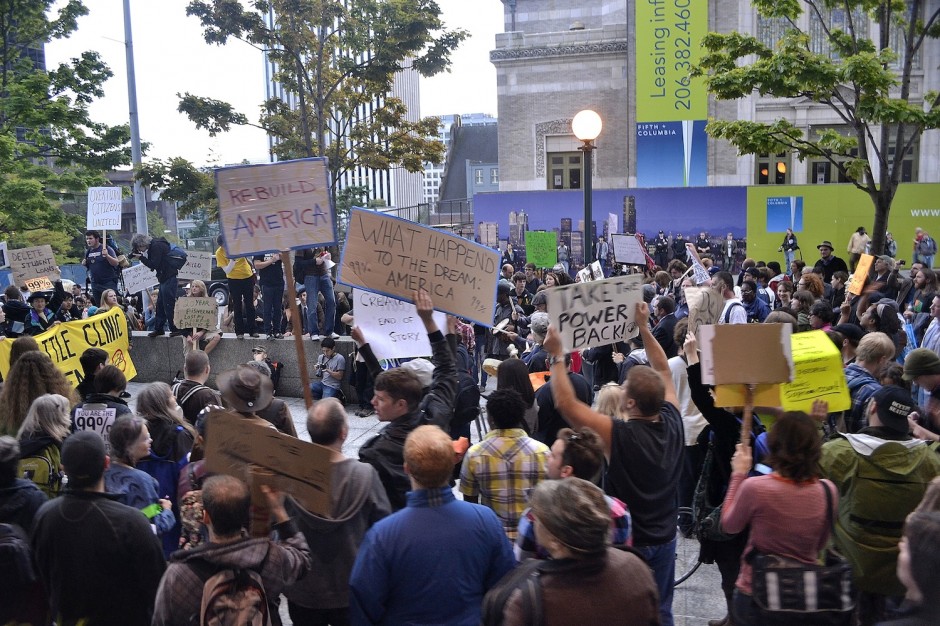 Protestors who weren't chanting huddled in small groups, discussing the war, school budgets and why they were closing their bank accounts in favor of a credit union. 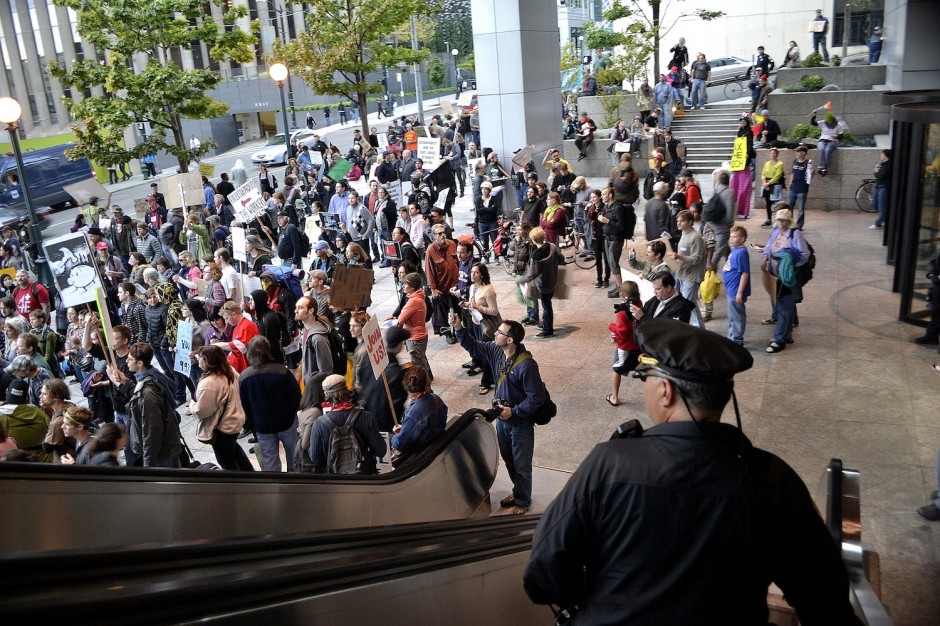 Police accompanied the protestors throughout the march, some standing guard at the entrance to the Bank of America Plaza, others walking through the crowd. 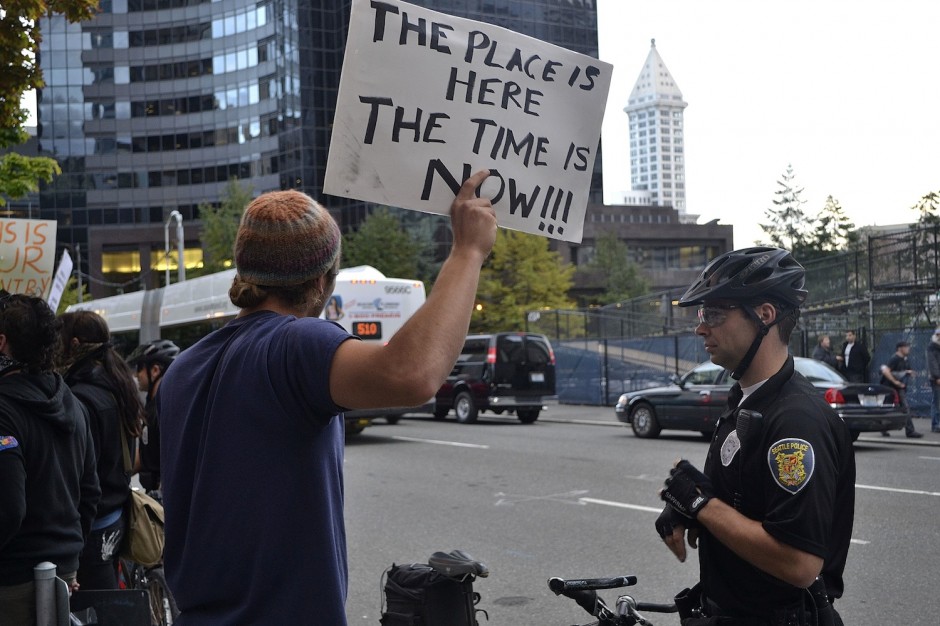 Other officers remained on bike patrol on the streets. Several discussed the protest with participants. 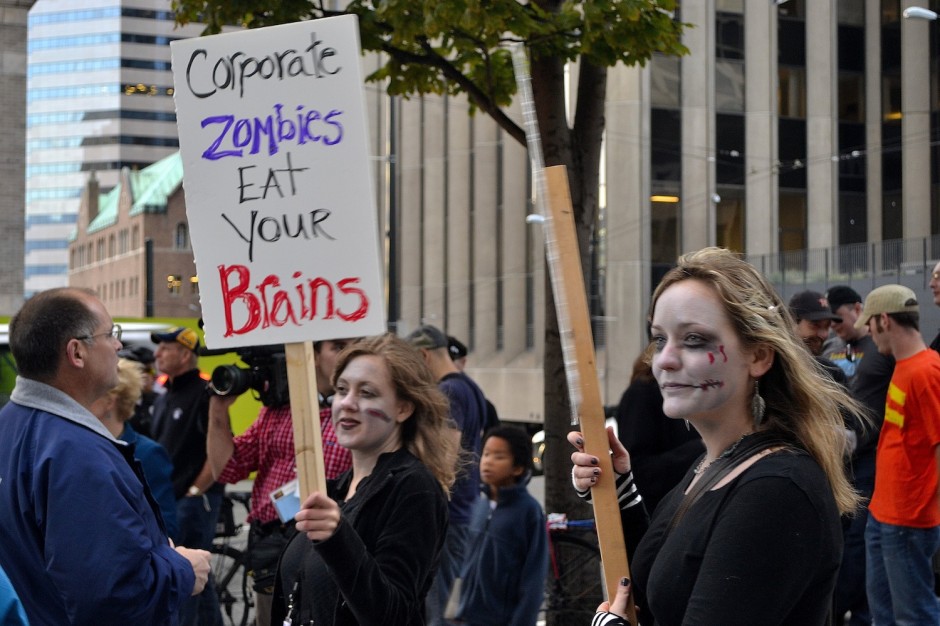 Seattle is incapable of holding any sort of event without zombies making an appearance. 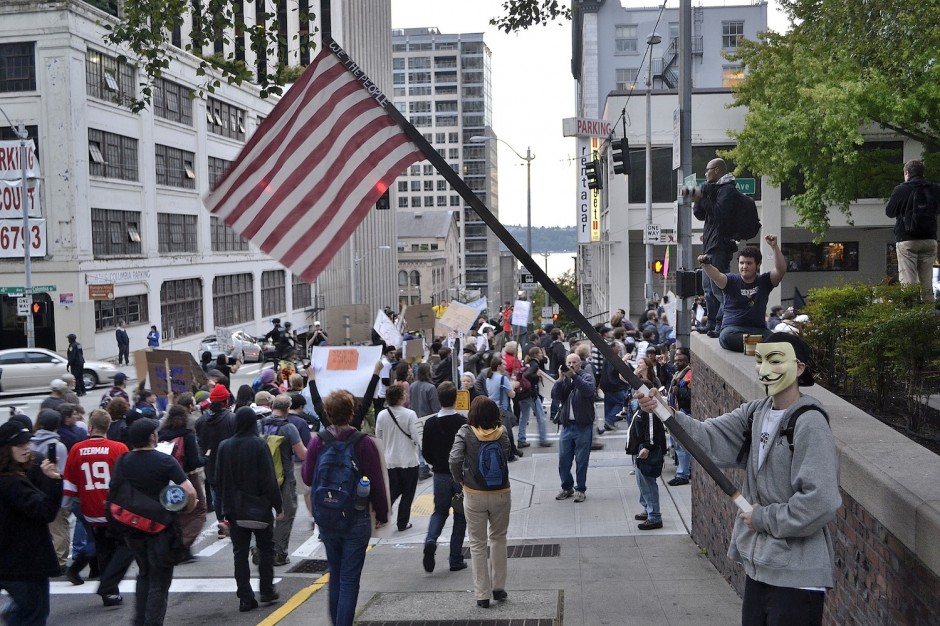 After half an hour in front of the plaza, the march continued back to Westlake Center. 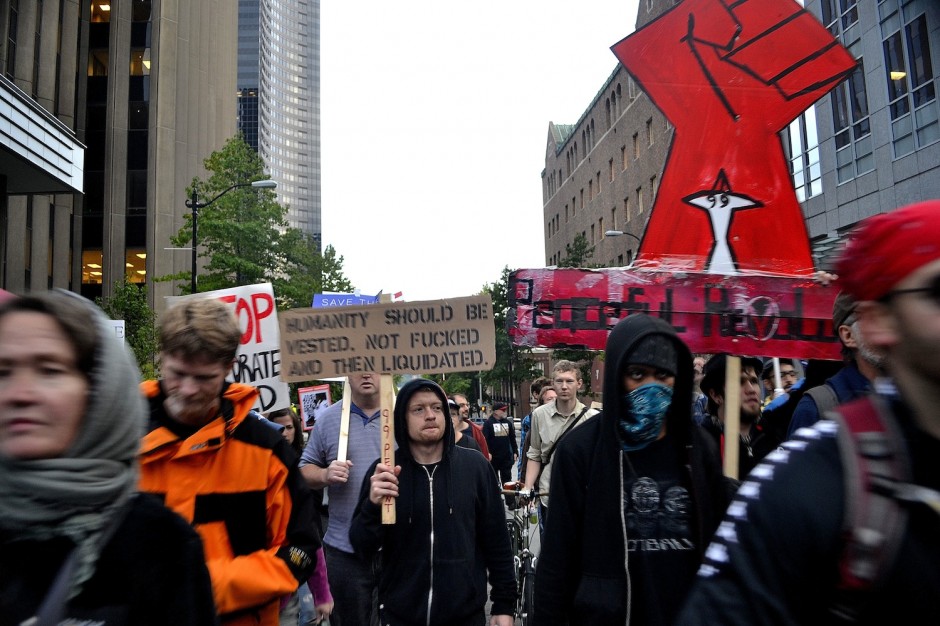 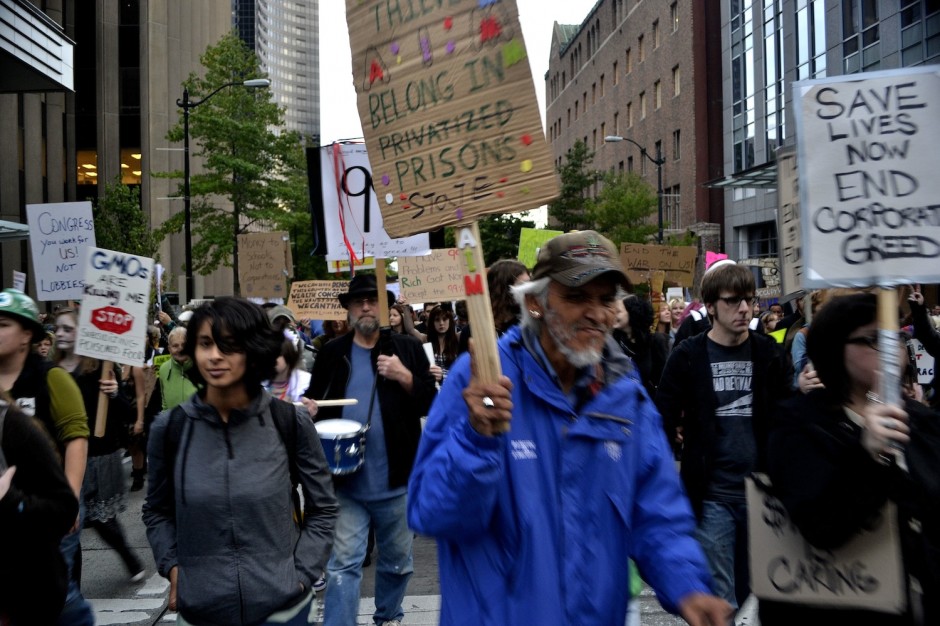 Demonstrators chanted "We are the 99%" and "Whose street? Our street." 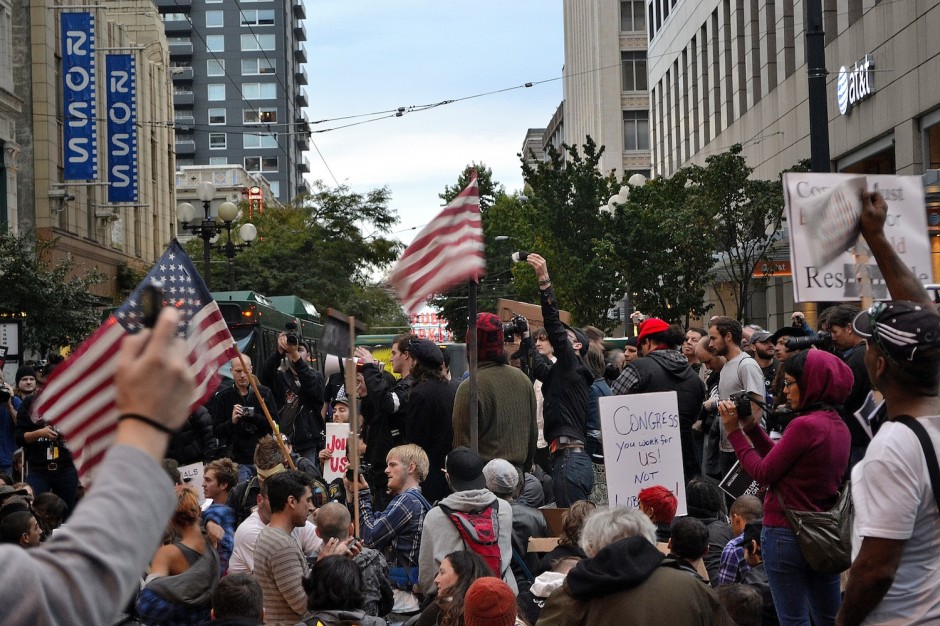 At the intersection of 4th Avenue and Pike Street, the group sat. One protest organizer on a megaphone informed the crowd that the police had asked them to move, and that they were free to do so if they wished. 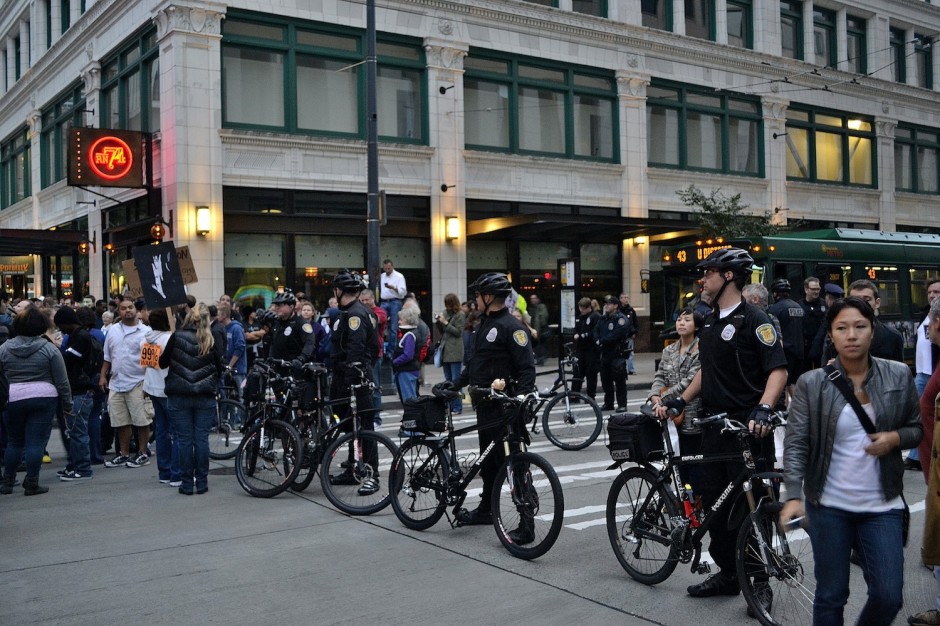 Police on bicycles and on mounted patrol controlled traffic. After ten minutes of sitting, a protest organizer informed the crowd that police had called for back-up. 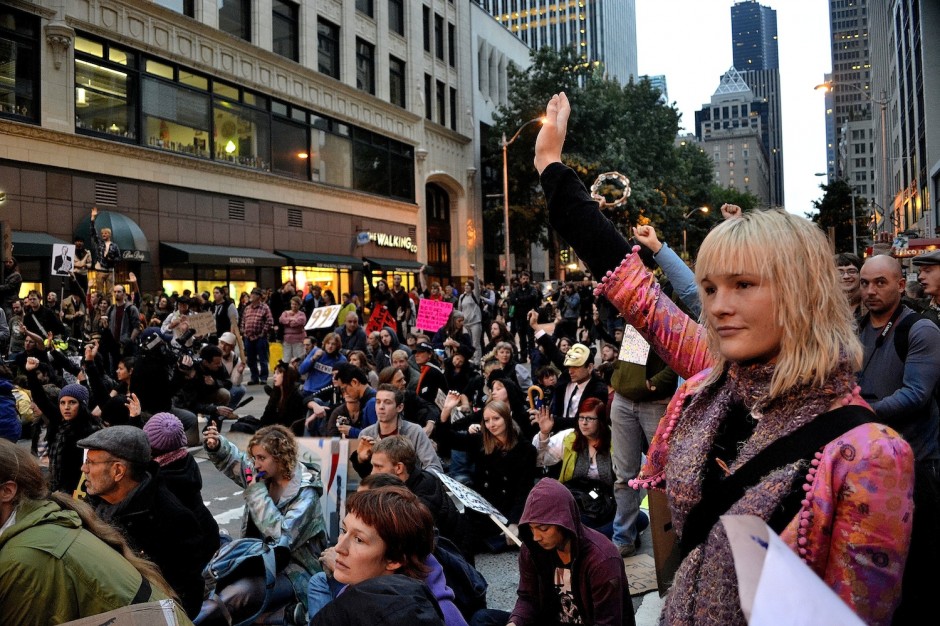 Protest organizers asked parents to remove their children from the sit-in. When police issued another warning, one organizer asked the crowd if they would like to hold the general assembly scheduled at 6:30pm there in the street, or if they would prefer to move back to Westlake Park as planned. "We'll take a vote. We're a democracy," he said. Organizers helped tally the votes. 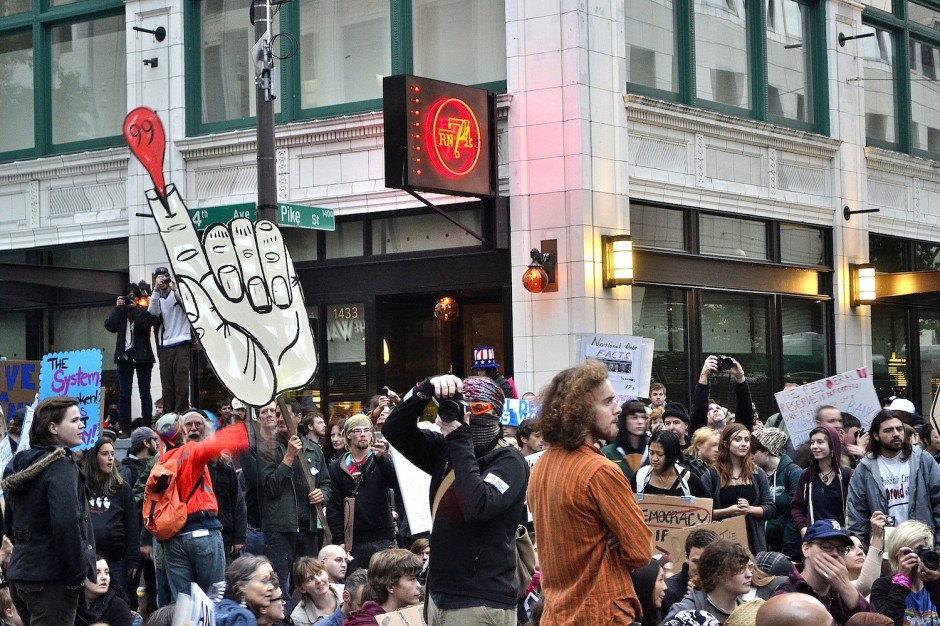 Demonstrators voted to move the general assembly to Westlake Park and cleared the streets. Two protestors chose to stay seated in the intersection. According to The Seattle Times, they were arrested.