MORE THAN 400,000 PEOPLE protested throughout Chile today for educational reform at the university level. In Santiago, the country’s capital, some 200,000 people marched, danced and demonstrated peacefully from Plaza Italia, the traditional meeting place for demonstrations, and down the main street, Libertador Bernardo O’Higgins (the Alameda) about 2 km to across from La Moneda, the presidential palace. 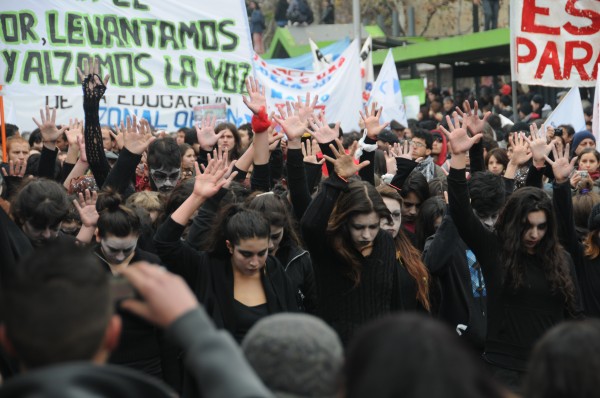 Students from UACH art school perform as they protest for educational reform.

The march was convened as a national educational stoppage (paro nacional) for universities, with university students leading the charge and employees of many universities, and many high-schoolers, and even some grandparents joining in. Protesters seek educational reform, with the main issue being the disporportionately high cost of higher education, which makes it unattainable for many, and likely to cause a heavy debt load for others. Lack of access to education for all contributes to Chile’s class divide, which is among the worst among all OECD (Organisation for Economic Co-operation and Development) nations, according to an OECD report (PDF).

At the march, singing, chanting, marching, costumed performers, and dancers, as well as legions of uniformed students from top public and private schools made their way down the street, with oversized puppets of (former Chilean president) Michelle Bachelet and Eduardo Frei (another past president) with devil horns, as well as a cleverly-designed pretend, nearly life-sized “guanaco” (tanklike vehicle that holds a water cannon), made out of egg cartons and cardboard. Hundreds of signs promoted nationalized, free, quality education, and called out Joaquín Lavin, the current Secretary of Education for his participation and financial gain in involvement in private universities. 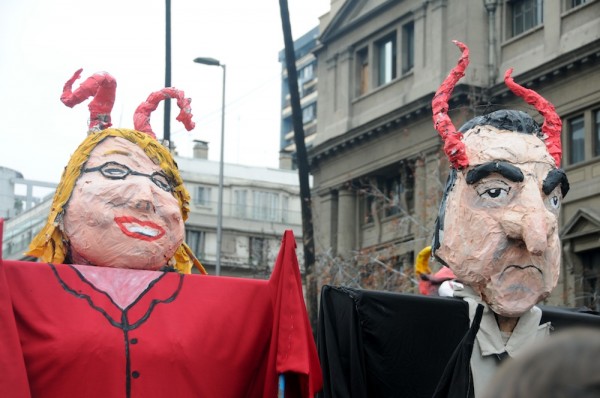 The march started at approximately 11:00 AM, and the carabineros, or police force was out in full riot gear, but the mood was mostly positive and peaceful, with some protesters chanting, “Pacos presente, gente decente” (The (slightly offensive word for police), are decent people).

At approximately 1:14 PM, violent standoffs between police and protesters began after a small group of protesters sacked a Claro (cell phone provider) storefront. Though the march itself ended by 2 PM, there were lingering protestors, some of whom were pulling down street signs, setting fires, throwing rocks and sacking other businesses, including a bank and a supermarket a few blocks to the west of the Moneda Palace. The police responded with tear gas, water cannons, and mounted policemen until the fires were put out, and more than a hundred protesters were taken into custody throughout Chile, primarily in Santiago, Valparaíso and Concepción. Transit was reopened in Santiago at 4:44 PM, but local media reports (link in Spanish) university takeovers into the night. 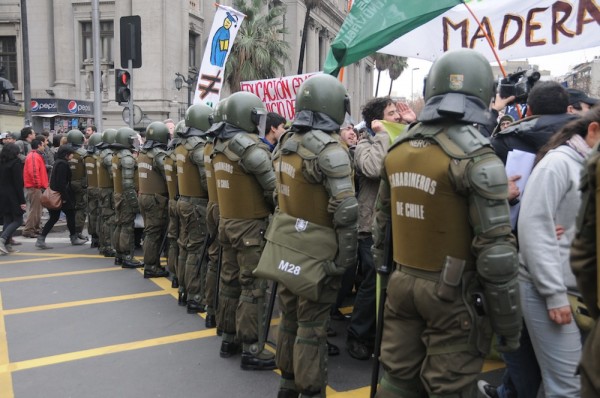 While protest in Chile is a fairly frequent occurrence, and the school stoppages of the “Revolución de Los Pinguinos” in 2006, in which 900,000 highschoolers across the country went on strike in are a recent memory, neighbors in the República neighborhood of Santiago, where this last photo was taken after the march was over but during the continuing conflict between a small group of protesters and the police continued, said it had been some time since they’d seen anything like this in the city. 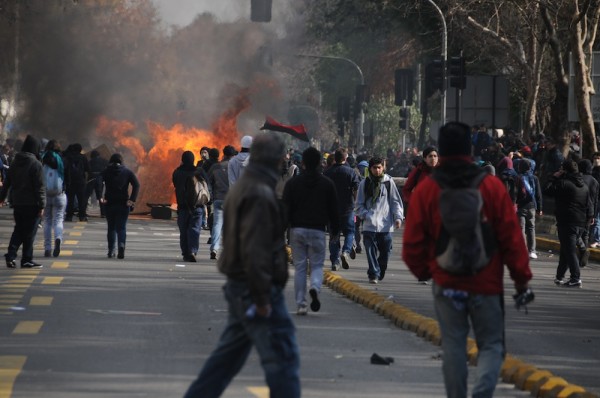 Vandalism at the end of the march.

Tagged
News Santiago, Chile
What did you think of this story?
Meh
Good
Awesome