Denali has something for every budget and for whatever level of adventure or comfort you want. The park has five lodges, each on privately owned land, with three around the end of the road at mile 92. A handful of lodging options outside the park are convenient if you plan to frequent Denali’s first 15 miles with your personal vehicle or via a hotel shuttle, and we list the most notable ones below. Each hotel and lodge is designed to cater to Denali travelers and a great way to familiarize yourself with the area is to strike up conversations with staff and other guests. Keep in mind, however, that this is inland Alaska — there’s no Costco up the street to pick up random items you’ve forgotten. The key to a successful Denali excursion is to be prepared before departing Anchorage or Fairbanks, and to use your lodging as a basecamp, albeit a cozy one.

Lodges within the park 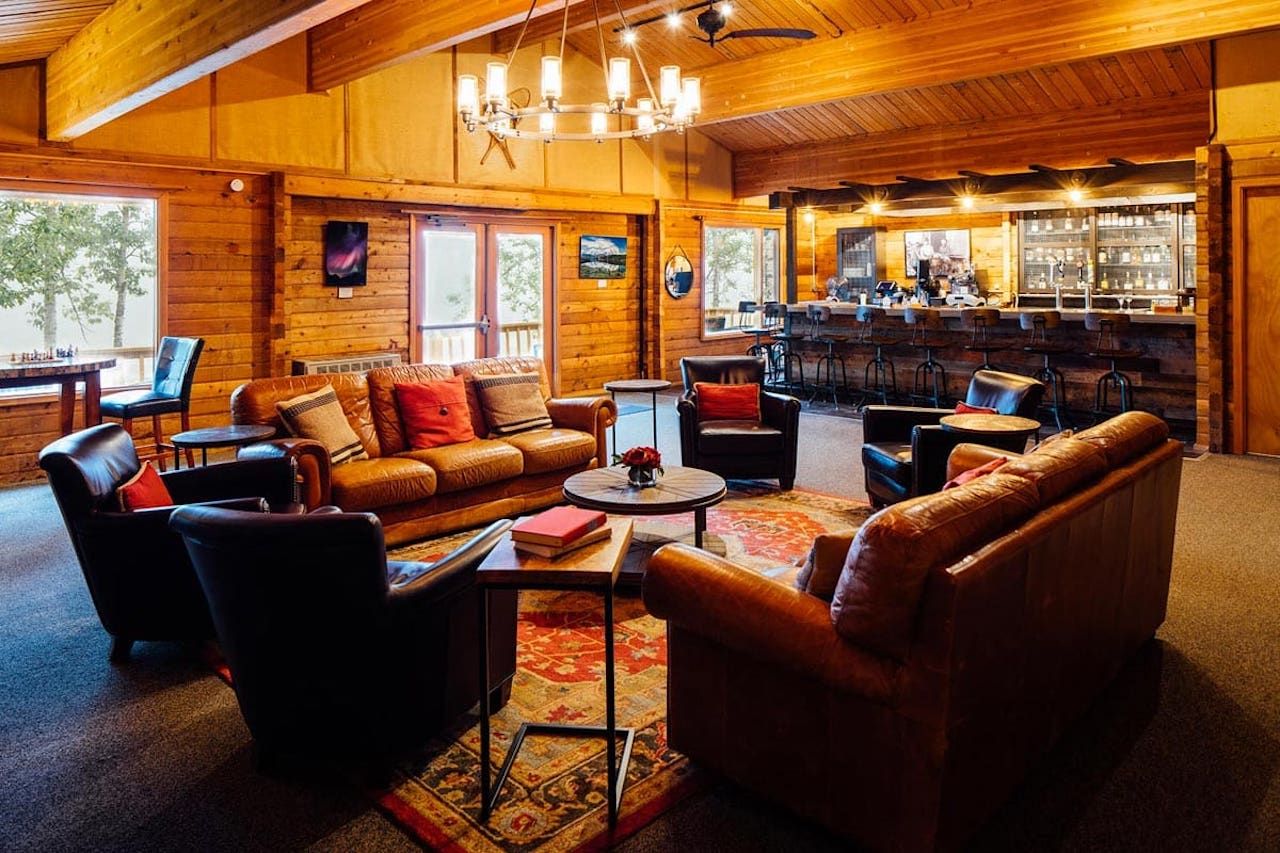 Denali Backcountry Lodge — This is the deepest accomodation in the park, on the banks of Moose Creek beyond the very end of the main road. If you’re looking to be living easy but away from the LTE, this is your spot. Accommodations are private and include en suite bathrooms — not a given in the park. Meals are included, and they’ll also take care of transportation and activities, like hiking, biking, and fly-fishing. WiFi is accessible in the main lodge. 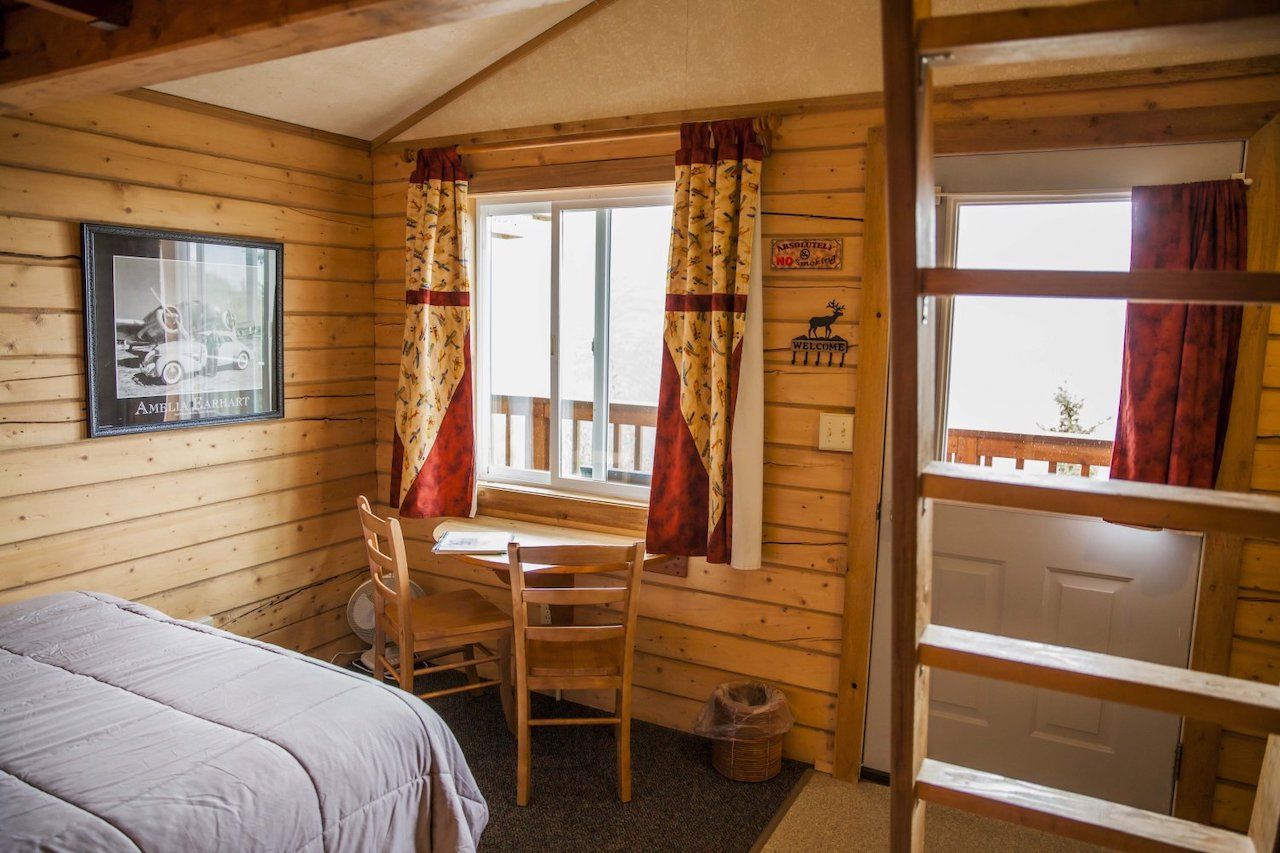 Skyline Lodge — The next farthest in is Skyline Lodge; which, with only five rooms, is the only “small” lodge in Denali. It’s also the base for Kantishna Air Taxi and its crew. The rooms lack private bathroom but do have common areas complete with a study and pingpong.

Kantishna Roadhouse — Near mile marker 92 on Denali Park Road, these accommodations are up next. Cabins are duplex or four-plex style, include private bathrooms, and cell service is a no-go. You’ll be forced off-grid. The entire lodge is run on a generator, so you won’t find electrical appliances (like coffee makers) in your room. Transportation is included in the fee, and a shuttle runs from the Roadhouse to nearby Wonder Lake. 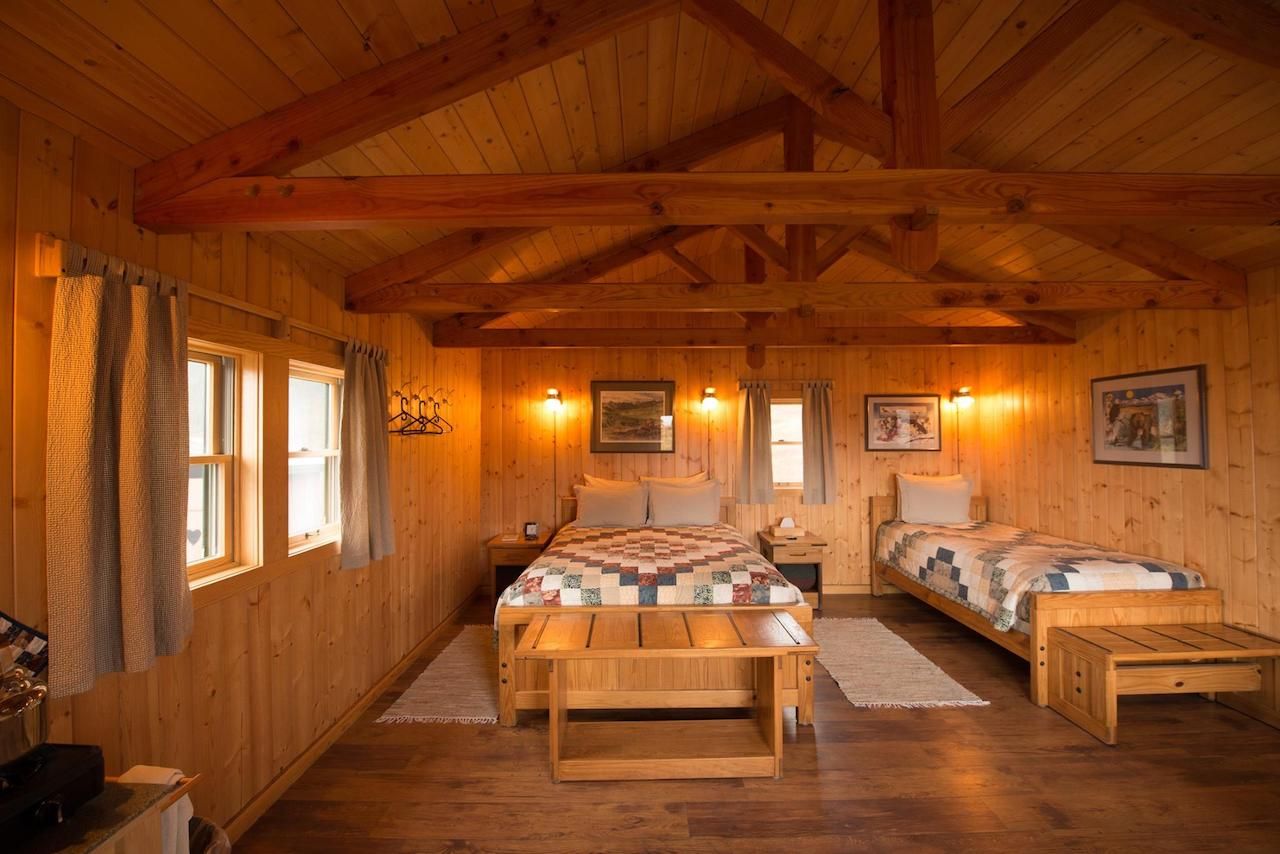 Camp Denali — If you’re looking for a cabin-camping hybrid, with private outhouses and central showers, but refined cabin-esque lodging, check out the more rugged Camp Denali at mile 87 — two miles past Wonder Lake. Cabins include a washbasin, a propane hot plate, and picture windows looking out at Denali. They’re the only facility in the park that can boast that view. The main lodge, dining room, and library are a five-minute walk up the hill, making this one of the more private accommodations.

North Face Lodge — Camp Denali’s sister lodge is about a mile away from Camp Denali and operated by the same family. It has all the “modern fixings,” like central heat, electricity, and private bathrooms. You won’t have views of the mountain yourself, but step out onto the veranda of the North Face Lodge’s main building, near the crackling fireplace, and you’ll have some of the best “easy” views of Denali you can get.

Hotels outside the park 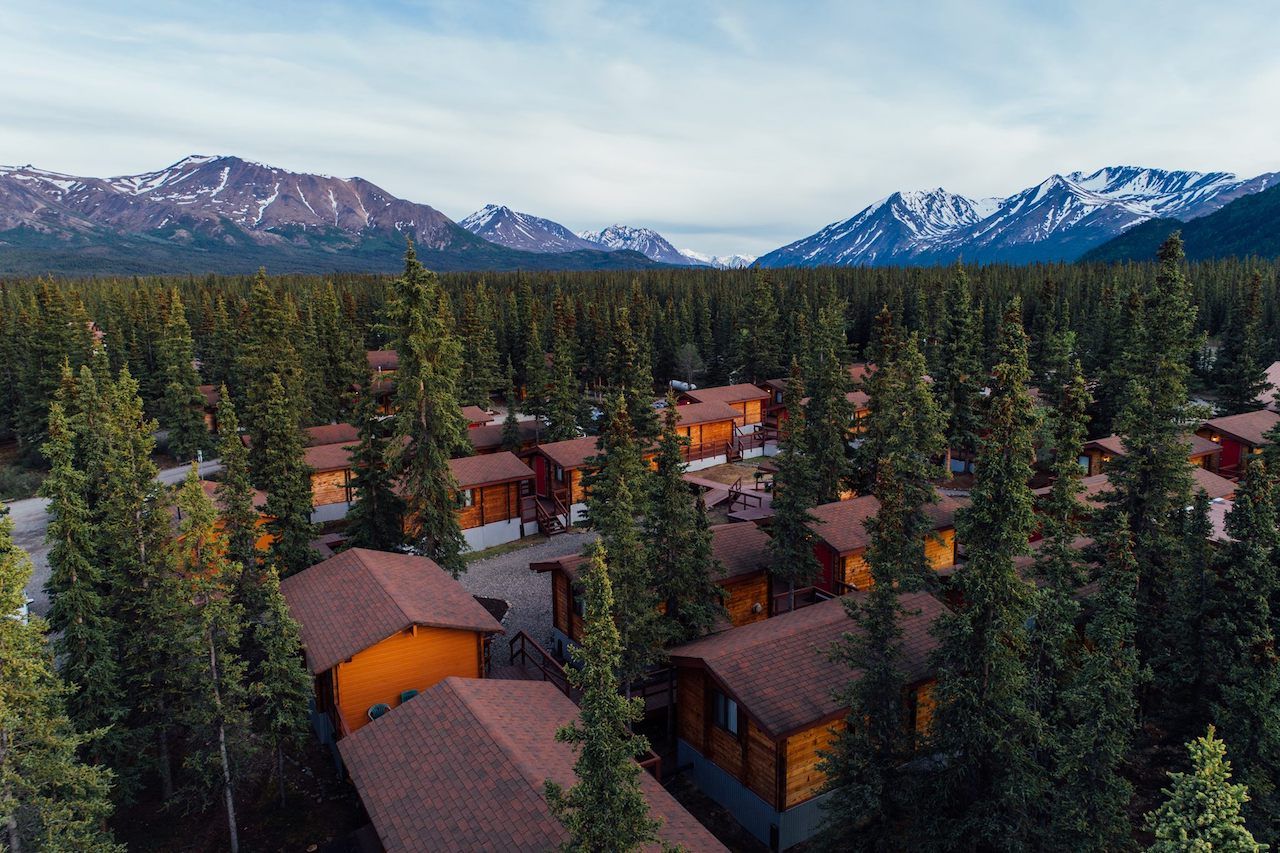 Denali Cabins — With its vegan-friendly Prey Pub & Eatery (despite the carnivorous name) and rustic set-up, Denali Cabins is a stand-out. True to its “cabin” name, guest accommodations are small, private, wooden lodges set up on a boardwalk, each with a private bathroom and easy access to the main restaurant, hot tub, and gift shop. Denali Cabins sits about 10 miles out from the park entrance. 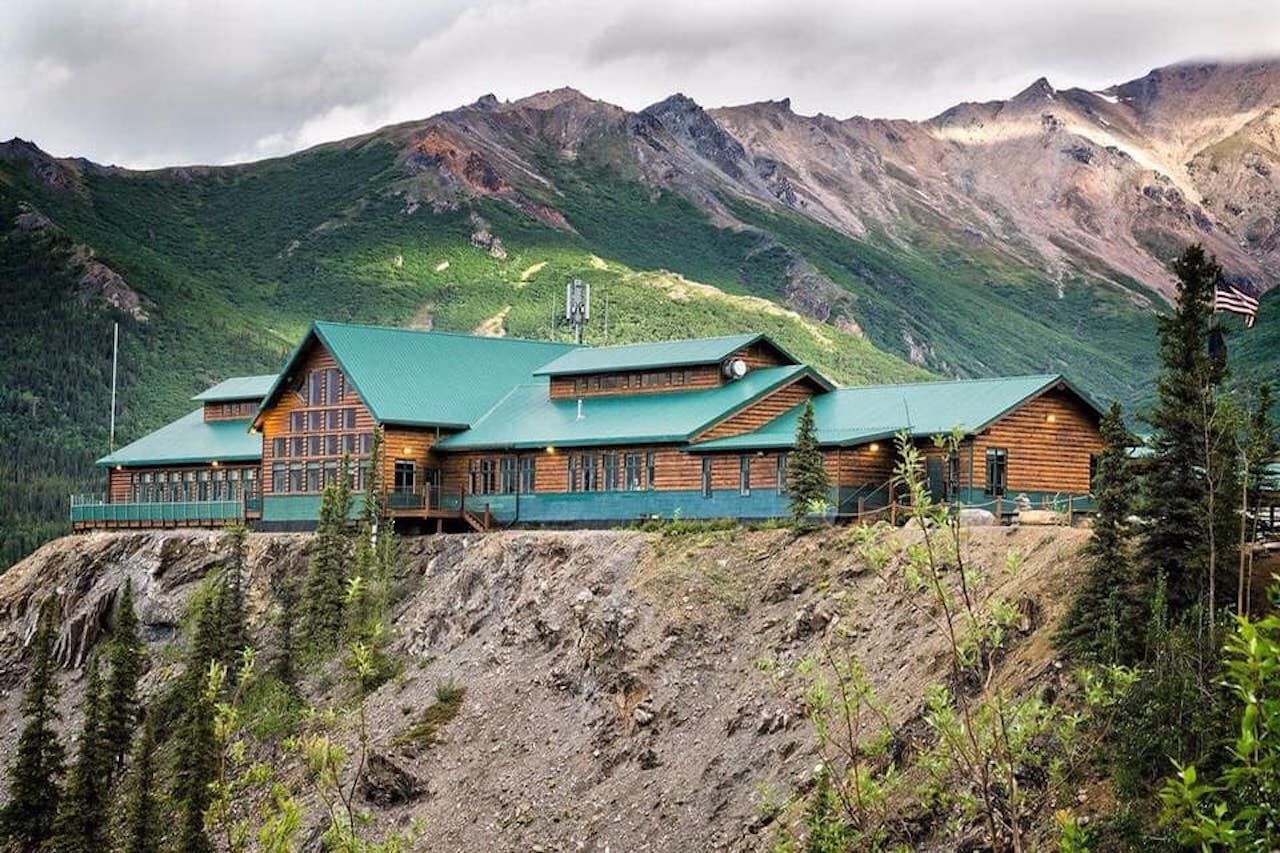 Grande Denali Lodge — If what you’re envisioning for your trip is more akin to the Fairmont Banff Springs or the Stanley Hotel, check out the Grande Denali Lodge, set high on Sugarloaf Mountain like a castle looking over its kingdom. With 160 rooms and six guest cabins, it’s a major player in the Denali game, located just a few miles north of the park entrance. 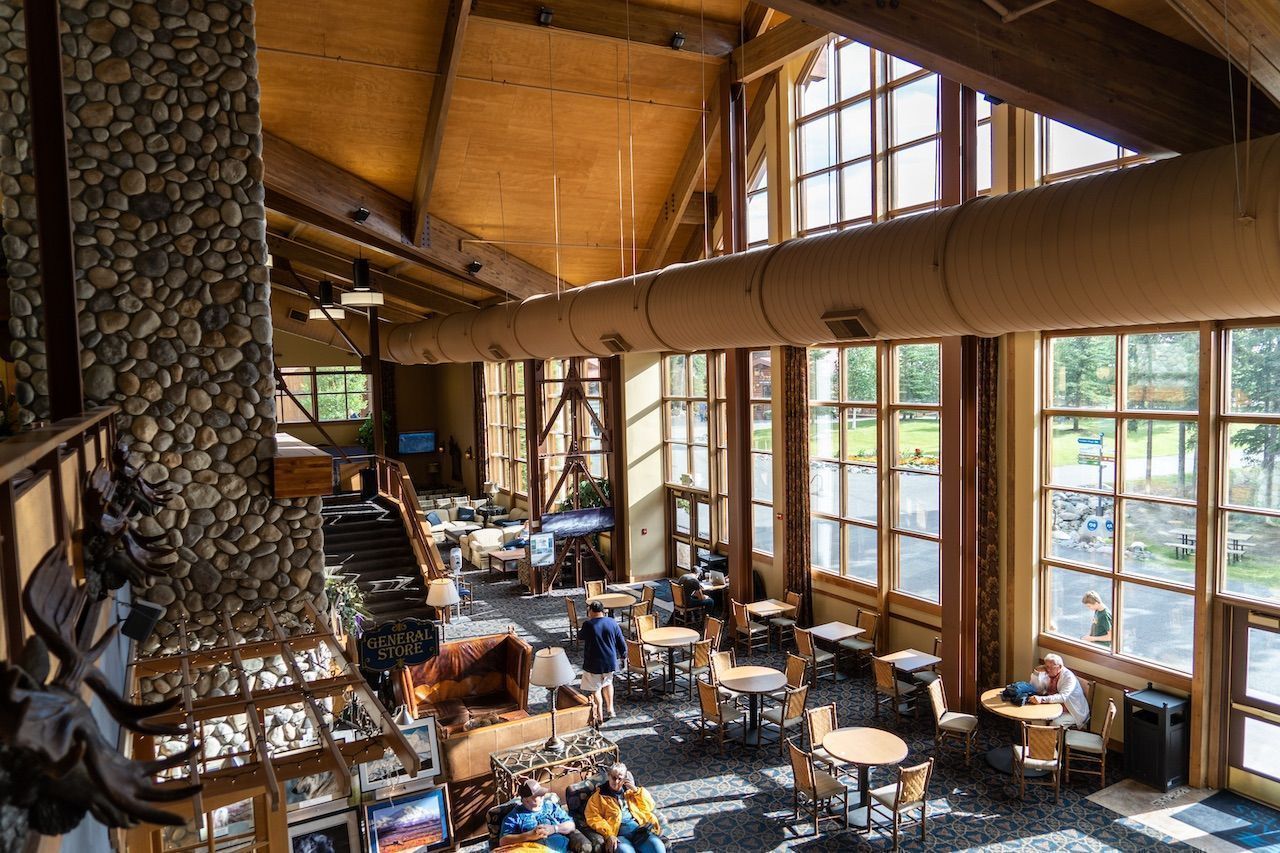