There’s a problem I have with numerical locks. See – and I’m going to trust that no one here is going to go snooping through my stuff now – I’ve been using the same numbers as a password for years. A lot of years.

Okay, it was my locker combination in seventh grade.

But the thing is, that’s six numbers. Some combinations use less, some more. And somewhere along the lines I mixed up two of the numbers – I can’t remember if the three comes before the eight in my original combination, or is it eight-three?

My point? Numbers are hard to remember. (What can I say, I’m a writer.)

Enter Wordlock, a simple padlock designed by Ila Security. Why oh why has no one done this before (and if they did, why didn’t they tell me)? 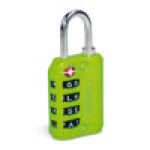 Wordlock uses letters, rather than numbers, to set a four-letter word combination. You don’t have the full alphabet to choose from for each of the four places – there’s ten letters per place – but they’ve been specifically chosen to produce a high number of word choices. (Including, yes, a few of our very favorite four letter words.)

So much easier than dealing with numbers. Although now I suppose it’s a matter of remembering which dirty word I chose.