NEITHER IS WATER. Not until you really need it. On the icy Tejas Trail, midway through a racing Guadalupe Mountains fog, the cold air drove me, 60 pounds of water and gear harnessed me to the path, and loose gravel tested my knees like hinges on a swollen oak door.

There, water and underwear were exciting.

A hundred iterations of clothing arrangements had come and gone, micro-adjustments of hats and sleeves and zippers and layers, but I’d missed the mark. A three-hour climb had me sweating. The rangers had said the temperature would drop into the teens at altitude. High winds and freezing precipitation were on the way. This was my first hike with my Redington RediLayer baselayer. And the hike didn’t look anything like we’d planned.

For years, I’ve used one baselayer. Hiking the Blue Ridge Mountains, the Scottish Highlands, or the hills off Belfast’s Antrim Road…hunting stands of Mississippi hardwoods…fly casting wooly buggers for bronzebacks under Richmond’s Nickel Bridge. My baselayer was good to me.

But it finally gave out. So when I received a complimentary set of Redington’s RediLayer Merino Wool crew and pant, I agreed to review them on a three-day Guadalupe Mountains backcountry hike. I wasn’t too concerned about their performance, to be honest. The weather forecast called for mild sunny days. And this was Texas, after all. 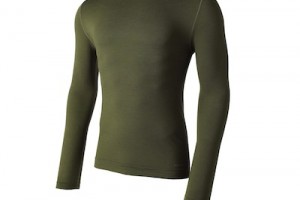 Before the trip, I gave the RediLayers a run-through. I normally don’t care for the feel of wool, so I was uncertain about wearing a wool baselayer for 72 hours straight. (At the barbershop the other day my barber stops mid-shave to say, “Uh, brother, you have very sensitive skin.” Yes, yes I do. What about it!?).

I put the baselayer on straight from the box. I sat in my recliner and waited. Eventually, I willed myself to itch a little. Then I washed them. They’ve not itched since.

I put the baselayer on wet from the washer and walked out into a cool drizzle. In the yard, I whistled taunts at the neighbor’s yippee dogs. They bounced and ran tight circles. My neighbor raced from around the corner of the house to herd her terriers back inside. I stood smiling, barefooted in the wet grass in long-handles.

Pretty quickly, I trusted the RediLayer’s ability to keep me warm while wet, dry quickly, and wear comfortably. I had a good feeling about the gear, but I was still skeptical about the claims of odor resistance and fatigue reduction.

We drove into Guadalupe Mountains National Park through a fog that hid most of El Capitan. We stepped out onto ice at the entrance of a 350 square kilometer park that’s home to riparian, desert, and mountain zones. Water is unavailable there, so like all backcountry hikers, we would pack that in. 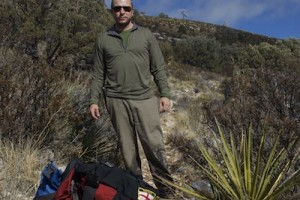 The first day was short, but the heaviest of the three. From the Park Headquarters we skirted the Pine Spring Canyon and climbed Tejas Trail up to the Pine Top Campsite at the confluence of the Tejas, Bush Mountain, and Bowl trails. We descended through woodland to Tejas, a backcountry campsite built within sight of a stream bed.

As predicted, temperatures dropped. Waves of wind built from anxious silence and crashed into the treetops in violent succession like heavy nor’easter surf.

Although I’d broken a heavy sweat during the climb, the RediLayer’s VaporStream, ClimaStream, and VersiWick technologies worked together to wick moisture away from my skin, which helped me stay dry and warm while climbing, resting, setting up camp, and playing a little backcountry football. I had been skeptical of the seamless claim; I could see seams when I opened the box. But they were invisible to the touch, which was especially noticeable in my waist. The RediLayers dried throughout the day and were both warm and comfortable for sleeping. They neither stunk nor itched.

Two inches of snow and 20-degree air welcomed us the next day. We thawed the camp stove and melted enough snow for two days’ water. Under light packs, we left camp and headed out on a slow hike through woodland, past the scrubby Mescalero Campsite to an exposed ridge on McKittrick Canyon Trail that gave us a vista back over the Chihuahua Desert flatlands. Back at camp, the day’s heat fled through the clear night sky and temperatures fell below the previous night’s low. A Nalgene of heated water in my mummy bag helped thaw my feet.

The RediLayers performed well as part of a layering system and as sleeping gear. I was surprised that even after two days, they smelled clean. Note: The length of the crew is a really nice touch. It’s much longer than my previous baselayer; so it stays tucked and keeps the body heat in.

The hike on day three led us through the most notable condition changes. The ice crunched inside my boot when I slid it on in the morning. The handles of my hiking poles clung to a layer of ice. We hiked from the canyon, past Pine Top, through pine and Douglas fir, and rimmed the Bowl Trail.

After adding a layer, we pushed to Hunter Peak at 8,368 feet. Clouds rolled in and freezing precipitation encouraged us back down. Micro-adjustments became layer peels and icy ground shifted to pine needles and then to gravel and dust. At the edge of Bear Canyon, the sun showed itself. I dropped all top layers, except for the RediLayer Crew because the Bear Canyon Trail would be “a controlled fall,” as my hiking partner called it, to the Chihuahua Desert. The RediLayers were comfortable as a solo layer and I appreciated the VersiSun 30+ UV protection.

After three days, the odor indicated only one.

So how do they perform when fishing? 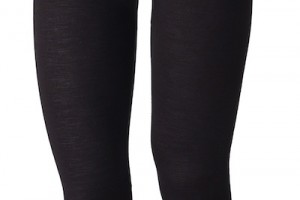 I also tested the RediLayer while paddling a kayak rented from Painted Sky Inn on Lake Buchanan and again while scouring Inks Lake for stripers with guide Ray Williamson.

I had been a little skeptical about some of the RediLayer claims. But after a cold day of striper fishing, paddling Lake Buchanan, and three days in the Guadalupe Mountains National Park backcountry, I’m a fan. The jury is still out on fatigue reduction, but the baselayer performed well with exposure to altitude, sun, high winds, heavy hiking, frozen precipitation, and sleeping in temperatures well below freezing.

And they were comfortable. These are a huge step up from the 100% polyester baselayer I’ve worn for the past several years. My only regret is not getting the quarter zip feature, which allows more micro-adjustments. (Note: Merino wool is common in high-end outdoor wear and comes at a premium to synthetic fabrics. I won’t be going back to polyester. For me, Merino’s performance justifies the investment. What’s more, you can wash the RediLayer like a tee shirt and lay them flat to dry.)

Redington’s RediLayer Wool crew and pant are a serious baselayer pair for outdoorsfolk who love to get out in it. They’re comfortable and help protect you from the elements and your own backcountry stink. I do recommend the upgrade to the quarter zip wool crew for about ten bucks more. Redington also offers the RediLayer in a nylon/polyester blend. But at $69.95 for the crew and $59.95 for the pant, it’s a little easier to get excited about underwear.