10:41 Feb 11, 2020
Top Regions
Top CitiesView All Destinations
Trending Regions
Trending Cities
Load More
I’ve dropped it a couple of times. Occasionally I put a furry hat on it and make it look like a troll doll. I once hung it from a tree in Uganda while people danced underneath. It’s my audio recorder and I do love it so.

If all you are looking for is a simple, cheap device that will record interviews for the purpose of remembering what people said, or for personal notes, then you do not need this device. At around $230, it’s overkill. It’s an indefensible extravagance to your equipment budget.

To catch the emotions in a voice or fine sounds of a lazy afternoon, the Sony PCM/M10 is decent value for what it does; which is record all manner of sounds with nostalgia-inducing clarity.

But first, the technical specs. The device has two built in condenser stereo microphones with a response range from 20Hz to 20KHz which, if microphones are not your thing, are exceptionally good for a handheld recorder. That’s the same frequency response range as a decent pair of headphones. Which means that, broadly speaking, if it is in the range of sounds you could hear on the headphones you are probably using, then it is in the range of sound that the recorder will record.

To put this in perspective, many voice recorders will typically only catch sound up to around 16KHz, effectively losing the really high pitched sounds that might be around when you press the little red record button. Sounds like the rustle of leaves, faint chimes, things you would remember.

Click to listen
It’s 6am in Gulu, Uganda, and I’m sitting outside as the sun starts to climb out of the sleep and the mist. The roosters are starting to do their thing, one tripping off another like some feathered telegraph. The crickets haven’t quite sussed out that it’s time to hand over the day, and the first traffic is starting to make its way up the dirt road behind the house.

The device also has a five second pre-record functionality which, once I needed it, I came to realize was genius. When the recorder is switched on and you press the record button, it essentially readies itself to record, but doesn’t yet. It sits primed and waiting for you to press the “Unpause” button to actually begin the work of recording whatever it is you want to capture.

While in this state, it keeps a five second buffer of whatever sound is around so that when you actually begin recording, you begin from five seconds before you pushed the button. 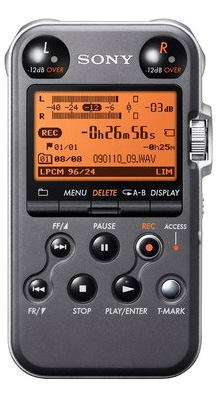 In practice, what this means is that if something audio-logically epic should occur nearby, you have five seconds after it happened to activate the recording afterwards in order to capture the event.

For catching unintended quotes or something unexpected, it can be the most useful feature I think I have ever seen in an audio recorder.

It also has – though I have never yet had reason to use it – a “dead” mode in which it appears to be off, shows no lights or display whatsoever, and yet continues to record.

Ideal if you are inclined to be sneaky for whatever reason. Or find yourself having to record in a place where the display lights might irritate your neighbors.

When conducting interviews, you can also use a built-in feature to “tag” your recording at various points by pressing the “T-Mark” button.

The recorder will then put a digital tag in the audio that can be viewed later in the (supplied) sound editing software, Sony’s Sound Forge Audio Studio.

Using this feature, you can quickly mark points of interest or transitions between questions or topics in an interview, so that you will not need to scratch around listening to snippets afterwards to try and work out where points of interest occurred.

On a more basic note, it has microphone and audio input jacks, so you could record sound direct from the line out of some electronic device, as well as a headphone jack to allow you to listen to the recording while it is being made and judge sound levels and quality in real time.

You are also able to control input levels manually (to increase them, for example, to catch faint sounds), or simply leave the recorder to judge sound levels for itself. It is particularly good at doing this automatically, while you are able to follow the recording levels on the front display to make sure that it is coping with the input it is receiving.

Click to listen
It’s 4pm in Gulu, Uganda. Dancers at the Cope IDP camp have put on the final touches for a performance that is going to last for hours. Thanks to some awkward jumping, I hang the audio recorder from a tree above where the dancing will occur. It dangles inelegantly from its wrist strap while the dancing commences down below. Boots with bells make a distinctive ring against the fast drumming of the central musican around whom the dancing takes place. The whole village has turned out to watch the performance, chatting between dances.

You can also record for up to 24 hours at the 44.1KHz/16-bit setting, or 19 hours @ 96KHz/24-bit according to the manufacturer. I’ve not watched it record in any rigorous scientific test, but do only recall changing the batteries once in a series of interviews that went on for a week.

The fact that it runs of AA batteries also makes it a welcome addition to the set of AA devices I own, rather than being something that needs its own little charging arrangement and accompanying cables.

It comes with 4Gb of internal memory and connects to your PC to download its WAV or MP3 files using a mini-usb cable (the same cable your removable hard drive uses). It can also take micro SD cards if you need to store much more audio, or if you want to use it as a portable music player as well and carry one less electronic device with you on the road.

Click to listen
Bishop Onono, now retired, was one of the few people from Gulu to meet with Joseph Kony of the Lord’s Resistance Army in person. We sat easily in his backyard late one afternoon. Our interview ran on for just over an hour, until the air lost its heat and the sky its light as it turned from orange to purple. Then it was time to head back home with stories of Kony and the LRA to make for unsettled dreams.

If you are a photographer wanting to capture high fidelity audio to go with sound-slides, if you need a way of capturing sound to go with video or other material, or if you are producing high-quality podcasts from the field, the investment in something like the Sony PCM/M10 is probably justified.

If you don’t need that many bells and whistles, there are other less expensive options which may work just fine.

Author’s note – The unit being reviewed here is not a supplied demo, and I wasn’t paid to review it. I actually bought it out of my own little piggy bank because I needed a solid recorder and I really do feel an awkward affection towards it.

6 spectacular Italian train journeys through olive groves, Cinque Terre, and Venice
Build your epic Colorado and Utah road trip with this flight, hotel, and car rental bundle
Every destination in the world currently open to US tourists
The ultimate week in Switzerland, from fondue to cliff walks and spectacular train rides
Renting a campervan is the best way to see Puerto Rico beyond the touristy resorts

Carveboards feel like surfing or snowboarding on land, and they’re in short supply this year