View all travel news
Top Destinations
Top CitiesView All Destinations
Trending Regions
Trending Cities
Load More
Somebody mentioned the other day that it still feels like winter in Hawai‘i. He wasn’t referring to the persistent rain or the uncharacteristic north swells. He was talking about the fact that everyone’s still driving around with surfboards in tow. 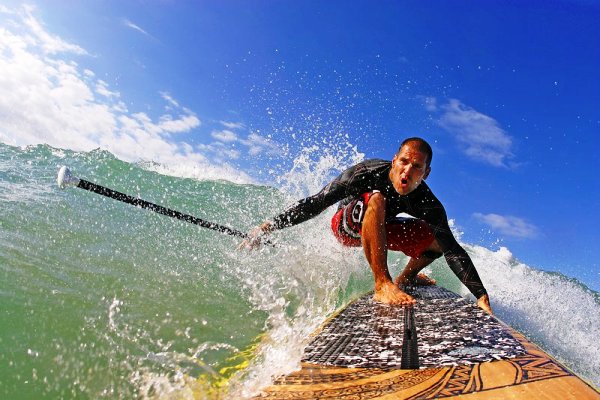 He’s right—actually, they’re stand-up paddle boards, which makes sense, since summer is paddling season. On the Islands, the sport’s booming popularity is undeniable, and stand-up paddlers have become a fixture on the seascape. They’re floating around the bays, cruising the coastlines, dropping into waves, and even navigating across open ocean channels.

As the sport has evolved into more specialized disciplines, so have the boards. If you’re in the market for a new stand-up board, keep in mind that form serves function. Currently there are three general types of boards to consider: downwind boards, surfing boards, and all-purpose cruisers. 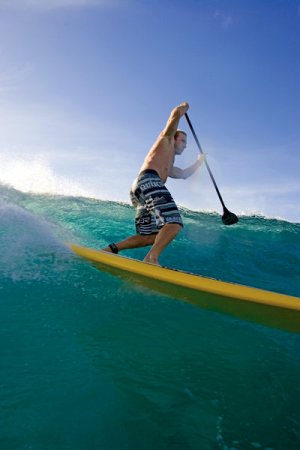 If you’ve paddled in windy conditions, you know that your body acts as a sail—one that doesn’t jibe. Rather than fight against strong gusts, stage a vehicle a reasonable distance downwind from your starting location and use nature to your advantage.

Voila, you’re a downwind paddler. If you get addicted to the speed or the surf-riding sensation that comes with gliding on the wind-generated waves, you might even become a downwind racer.

Just like you wouldn’t jump on a moped to zip down the Autobahn, it doesn’t make sense to race downwind on a fat, floaty board. Downwind boards are a little bit longer and more narrow, a design that increases hull speed.

Southern California’s Joe Bark has crafted numerous race-winning boards. A good bet is the “BARK Stand Up Mid,” described as a “practical” distance and race board. The stylish, full-carbon or partial-carbon model can be ordered at a width of 26 to 30 inches and a length of 14 to 16 feet, and rudder and tiller set-up are optional. It retails for around $1560. 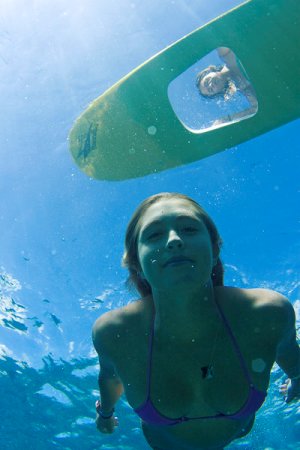 Conventional wisdom suggested the 31” board would be too wide, but, he claims, it surfed “unreal.” (He said he had a blast, later confirmed by two different spectators who told him somewhat enviously how much fun he appeared to be having.)

One glance at the photos posted on the Paddle Surf Hawaii site proves that Blane Chambers’ 9’3” Ripper model, well, rips. (Or, if you’re not one of the world’s best surfers like Jamie Sterling, Ikaika Kalama, and the others pictured, at least has potential to.) The board measures 28 3/8” wide, and its responsiveness allows surfers to execute radical maneuvers and negotiate deep barrels. 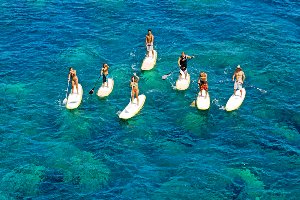 But let’s face it. Not all stand-up paddlers have a burning desire to paddle 32 grueling miles of open ocean chop to get from one island to another, nor do we aspire to charge a heaving set at Jaws or Teahupoo.

A lot of us are perfectly content to drift along a lazy river or seek out an unoccupied corner of the coastline where we can quietly relish the lingering hours of daylight.

For these purposes, a basic cruiser is all you need. Stand-up cruisers are wide—beginners should look for something around 30 inches—which makes them more stable.

The 10’6” Wahine Model ($1,495 including deck pad, fins, and carbon/fiberglass paddle) designed by Kyle Bernhardt for Tropical Blends appeals to a gentler breed of paddlers, its description suggests: “Now here’s a board we built specifically with my wife in mind.

Looking for a more challenging workout, she wanted a board that was small enough to handle easily, agile enough to excel in flat or textured waters, and sleek enough to give her the glide and stability she found in her bigger board.” A really useful feature of this 30”-wide board is its unobtrusive, built-in handle, which makes it much less cumbersome for people with shorter arms to carry.

It’s a good idea to rent a few boards first to figure out what you’re most comfortable standing on. There’s nothing more frustrating than buying equipment that you’re unable to use. Check out www.standuppaddlesurf.net for an extensive archive of board reviews.

Look for Catharine’s upcoming piece on choosing the right SUP paddle. And for those interested in learning a bit more about the history behind Stand Up Paddling, as well as a look at the sport’s pioneers, please check out Stand Up Paddling: A Brief History of C4 Watermen