THE ROOM TASTED like Bourbon Street on a July Sunday at about midday, acrid fog of alcohol and nicotine brewing in a low heat. The only distraction came in breezes of half-recollections and full regret. This was the welcome to my first apartment in my first new city. I hated every bit of it.

The next day, my dog Jack and I squared off with the city. I jabbed at Richmond from this angle and that. We crossed Laburnum, slipped in on Broad, hooked through Barton Heights, ducked the railroads clanking overhead at Shockhoe, kicked at the litter on Broad and weaved through the derelicts on Grace. Richmond hit us with a flurry of industrial areas, slums, toll roads and sprawling suburbs. We staggered to our corner apartment. A burst of gunfire sent us to the floor. That’s where we spent the night. Victor Round 1: New city.

Grad school pulled me from rural Mississippi to downtown Richmond, which now after having lived in Manila doesn’t seem like much. But at the time I was miserable and desperate to find my place in the outdoors there. To be sure, mine was no unique circumstance. Some 38 million Americans moved last year, many to urban areas, where 80 percent of all Americans now live. Not everyone moved to a new city, but I dare say most moved to something new. And anything new can feel as impermeable as asphalt.

The lessons I learned breaking into Richmond have served me since. Here are a few.

At sunrise, Jack stood on the truck’s bench seat, watching through plate glass as I ordered breakfast. “Scattered, smothered, covered, chunked,” yelled the waitress at the blur of a cook. At least something’s the same here.

Grey-haired men with calluses gather in such places to crowd around tables, drink small black coffees and trade stories. So, eavesdrop. Ask about their favorite outdoors store. I left with good information and a belly full of comfort food.

Jack and I were the first at the outdoor store that morning. I soon had:

The old man who ran the fly shop asked me if I’d been fishing the James River long. I admitted I’d not been in as much as a Virginia rain, much less a local river. He laughed and shared hotspots, patterns and tips for bronze backs, smallmouth bass.

That evening, Jack and I hopped rocks in our first James River sunset. We slept on the floor again, but I had hope and a plan: start with the water.

Start with the water. 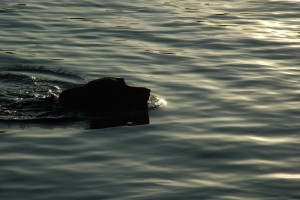 At 8:00 a.m. on Saturday I was strapped into an upturned kayak, flailing a froth to get back to air, wondering what the hell I’d gotten myself into. Thankfully, the instructor was there to right me.

For two days, I studied the river and its anglers, noting where they fished, the target of their casts, and so on. By the end, I could roll, wet exit and read the river a bit. I’d also learned the river access points and found the Old Man’s favorite spot.

A river is the urban outdoors epicenter in many cities. It’s a good place to start exploring.

There’s something about a staged near-drowning that makes folks amiable. So, by 9:00 a.m. Saturday I had new friends who offered all their urban outdoors knowledge. Their insights were helpful. Maps put it all into perspective.

Find a map and get lost.

Once I learned the lay of Richmond, Jack and I spent countless hours exploring the water and woods on foot. It’s hard to get lost on a trail system that parallels a river, but it’s easy enough to lose yourself. When two roads diverge in a wood, follow Frost. 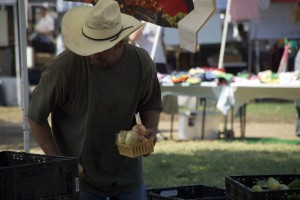 Farmers make up less than 1% of the US population. Yet, our food security depends upon their skilled interaction with the land. Although farmers are few, farmers’ markets offer urbanites a chance at a perspective and knowledge to which we otherwise have little access.

* * *
We moved to a new place within a walk of the river and downtown. The impermeable city opened and a good urban life grew around me – a comedy club on campus, Cuban food on West Franklin, a coffee shop on Cary, pick-up soccer on Patterson and a group of friends who met on Tuesdays. Still at every chance, I fished the Old Man’s favorite spot and discovered my own.

I stepped into the water at the Nickel Bridge at 4 p.m. It seemed the city had moved and left me to watch over the river and the bronze backs. I cast a crawfish-colored, bead-headed wooly bugger up-current at a 45. The strike of a game 12-inch smallmouth sent electricity through me. After several casts, I floated down to the next rock and began again. By sunset, I’d worked down to my favorite spot.

The slow water reflected perfectly the pinks, yellows and purples of the painted sky against the black tree line. Carbon hued lumps formed winged ripples, directing my gaze toward coal country. I sat chest deep lost in the ripple.

A buck stepped to the riverbank. I sunk into my best alligator imitation. Only my nose and eyes protruded. I put my fly rod between my teeth, splayed my legs and pulled myself along, careful not to breathe too deeply, lest my back crest. He fed, drank and watched. When I was within 20 feet, the buck stomped and snorted. I froze. In time, he calmed. Nearby the Federal Reserve Bank fought the State Capital for prominence; but at the bank of the James River, the buck and I explored the mechanics of one another’s breath in a surrendering light.

A mile away, my friends began gathering at our favorite pub. In a little while we’d crowd around a table there to drink cold beer out of small glasses and trade the day’s stories.

10 Airbnbs in Richmond, Virginia, To Experience the Best of the City

10 Food and Drinks You Need To Try on a Trip To Richmond, VA

Two Explorers, One Expedition: Why You Should Vote for Trevor Frost