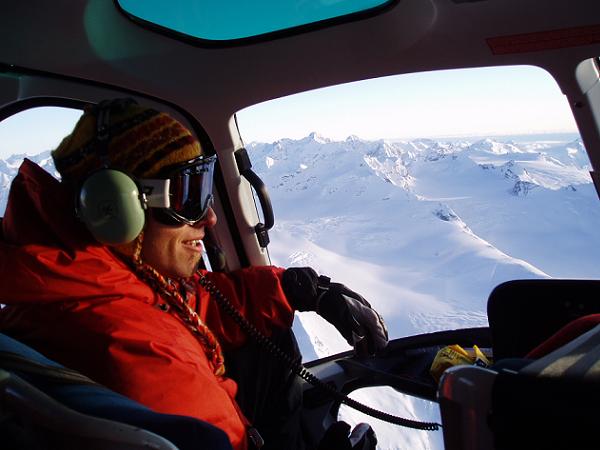 Ever wonder where Red-Bull athletes come from? Back in the mid 90s there was a house in Squaw Valley, California. They called it the Primal House. 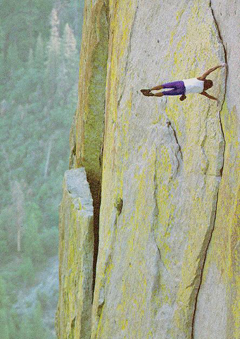 SIX MONTHS AFTER GRADUATING FROM HIGH SCHOOL, Tal Fletcher sat at the bar in the Beer Garden in Squaw Valley, California, drinking Milwaukee’s Best. The bar was below street level, windowless and dimly lit.

The in-house band, The Beer Gardeners, cranked through covers of the Stones, Credence, Dylan, sometimes hitting just the right combination of pitch and volume so that the old-school ski posters buzzed on the walls.

Nearly everyone there had come off a shift working somewhere on the mountain. They still had on work clothes, work boots, ski boots, Gore-tex jackets duct-taped together. The drinking and lounging was mostly relaxed, with stories of the day’s accidents, mishaps, or particularly good runs recounted over mugs of beer.

Tal was there on a coin toss. After graduating from Redwood High School in Marin County, California, in 1993, he flipped a quarter. Heads, he’d go to college, either at U.C. Davis or U.C. Santa Barbara. Tails, he’d move up to Tahoe and try to get on the ski patrol at Squaw Valley. But even as the coin spun through the air, he thought if it landed heads he’d have to go two out of three.

He didn’t have to: it landed tails. 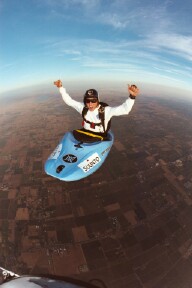 Tal went to a job fair in Tahoe and learned that his training and experience weren’t enough for one of the highly coveted spots on the patrol. Through his climbing experience, however, as well as his E.M.T. certification, Tal got a job at Bungee Squaw Valley, complete with a ski pass. He moved to Squaw that summer.

The bartender at the Beer Garden, Jimbo, casually pulled draughts—many into personalized mugs—then slid them down the bar. As always, he was sporting his mad scientist glasses, Ray Ban Wayfarers, only with clear, coke-bottle lenses. On anyone else they would’ve looked ridiculous, but on Jimbo they seemed to fit, reflecting, it seemed, his intense vision of the world.

Tal kept drinking and snacking on free peanuts, adding to the mountains of shells that would cover the floor of the Beer Garden by night’s end. He noted that for some of the more dedicated ski bums, the peanuts were dinner.

He watched the mugs sliding by. You had to show commitment, good attendance to get your own mug. But for regulars who didn’t have one yet, or for friends and special guests, there was also “the floater.” Tal had been putting in a fair amount or hours in the Beer Garden since moving to Squaw.

“Hey!” Tal had to shout to get the bartenders’ attention. “Can I get the floater?”

Tal glanced at the floater once more, then watched the other bartender lean over to Jimbo and say something. Then Jimbo turned and looked through his thick lenses.

“I don’t know that guy,” Jimbo’s voice rose over the music.

Shit. Tal felt the blood drain out of his face. But then he thought: that’s o.k. I have to earn it. 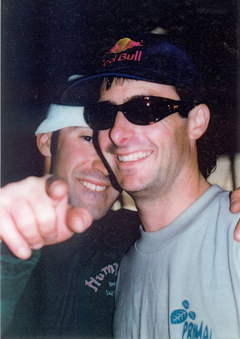 Over the next three years, Tal would end up spending many nights couch-surfing at Jimbo’s house, the Primal House. Eventually he’d move in, becoming one of the more than 50 people that for at least a few months paid rent there. At any given time, the three-bedroom A-frame housed Jimbo and several roommates, plus Boing, Jimbo’s big German Shepard, and usually two or three other dogs.

The gear spilled over into the house, from bedrooms to the couch in the living room, where there was a climbing wall. After moving on from the first Primal House, the crew set everything back up in another A-frame a few blocks away. In addition to the climbing wall, this one had a trampoline in the living room. The trick was to jump from the loft, bounce off the trampoline, then grab one of the holds, and stick it.

As occurs sometimes in just the right conditions and timing, the Primal House drew together a circle of people that became close friends, brothers. Owing largely to their trust in one another, the Primal crew would collectively push their skills in various skiing, mountaineering, as well as B.A.S.E. and bungee jumping exploits, pioneering new techniques and writing history as they went.

Out of all the housemates, the one who came from farthest away was Mihai Calin Constantinescu, or M.C., as everyone called him. M.C. had come to New York with his mother in late 1979. The two arrived penniless, having fled Communist Romania.

Although he remembered little about his childhood there, M.C. later wrote in his autobiography: “You could never forget the way the Russian Soldiers marched up and down the streets with their high leg kicks, or how there were lines all over the city for food or products.”

M.C.’s father had died in the 1977 earthquake. Only five at the time, M.C. wasn’t told about his father’s death until his mother took him to visit the cemetery a year later. “I believe that on that day,” M.C. would write, “my mother vowed to find a way to leave communist Romania and raise her only son in the free world.”

M.C.’s mother found work in New York as a cab driver, taking her young son with her on rides. Twenty years later, M.C. began his own company, Fast Taxi, hiring many of the Primal housemates as drivers. The first cab was 1973 Cadillac with a monstrous sound system.

Similar to the crowd-gathering effect Jimbo had at the Beer Garden, Tahoe-area locals would wait hours simply to ride in M.C.’s taxi. M.C. drove fast, and when he didn’t have customers, drove even faster, setting his personal record: 180 miles from Truckee to San Francisco in an hour and 50 minutes.

He was on his way to contest a speeding ticket. 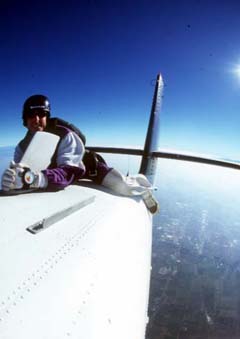 Frank Gambalie, or Gambler, set up his room in what was the Primal house’s sauna. In the mid 90s, he took up skydiving lessons with Jimbo. Their training was not so much for skydiving itself, but for building the requisite skill-set for B.A.S.E jumping, or using a parachute to jump off fixed objects.

At the time BASE jumping was still in its infancy, something undertaken only by a small group of veteran skydivers with years of training. Jimbo and Gambler made their first BASE jump off after having only skydived 12 times.

Over the next several years, Gambler took on a series of high-profile BASE jumps without getting caught. (Except in special situations, B.A.S.E. jumping is almost always illegal.) He had a working knowledge of alarm systems and locks, and dressed up as a technician in order to infiltrate buildings.

Eventually he was approached by Red Bull, which had just come to the U.S. Gambler became one of the first athletes to be sponsored by the energy drink company, paid to travel around the world and BASE jump.

Gambler’s influence over others in the house was profound. A short time after learning to BASE jump with Jimbo, Gambler began mentoring two other housemates, Miles Daisher or Miles D., and Shane McConkey. Both Miles D. and McConkey went on to become Red Bull Athletes, and Miles D. would later open his own BASE jumping school: Miles D’s BASE camp, in Twin Falls, ID. 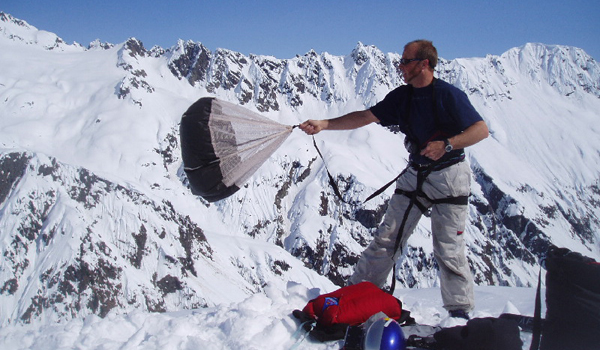 Seeking new adventures, he turned to Heli-skiing (using a helicopter to access remote terrain). In 1998, Quinn found a lodge in Cordova, Alaska that wasn’t being used during ski-season. Seizing the opportunity, he set out to create the ultimate heli-skiing experience, one that captured the spirit of Alaska not only through skiing, but every wilderness option from sea-kayaking, surfing, and ice-climbing, to wildlife viewing and fly / open sea fishing. This would become Points North.

Among Points North’s first guests were Jimbo, Tal Fletcher and M.C. “Life there was accelerated, like living in a Metallica song,” Tal said. Over the next several years, he and Jimbo would become guides there, and Miles D. was appointed “the Director of Fun.”

For more than a year, one of the downstairs bedrooms in the first Primal House was the sleeping quarters / office of roommate Mike Richardson, or Senior. Senior created a magazine, Boards in Motion with the mission (as stated in the inaugural issue Jan/Feb 97) to “always hold true to what we believe in. . .the rider’s potential to ride the boards as an extension of the body. . . the writer’s potential to share the transcendent, curious, raw, and personal characteristics of people and travel; and above all, the cycle of water in nature and the rage of boards in motion.”

Senior’s letter in the second issue, (Nov. 97) described a day skiing with his friends in the backcountry of Mt. Rose.

His letter ended by saying:

Some of the people I saw today, I probably won’t see until early April, when the migration north to Alaska begins. Others, I may never see again. It sounds morbid, but you never really know. The one thing I do know is that my memories of that day will last forever, as will theirs. . .
. . . I urge all of you to pursue your dreams. Drop everything and go for it. . . Touch as many lives as possible in a positive way. Very seldom do we actually get to say goodbye and yes, tomorrow is too late.

Boards in Motion never got as far as the Senior and Primal crew hoped—only 5 issues were published—but achieved something that none of the corporate ski magazines ever did. It spoke not only for the Primal House, but for people everywhere who lived their dreams.

Although he never paid rent at the Primal House, climber Dan Osman, or Dano, was a frequent couch-surfer there. Dano starred in several rock climbing videos, his long black hair swinging behind him as he flew up cliffs, free-soloing (climbing without ropes or safety gear), at maximum speed.

Like Gambler, Dano also saw something profound in the act of jumping off mountains, and began experimenting with controlled free-falls. Instead of using bungee cords or a parachute, he would deliberately fall hundreds of feet on a regular climbing rope.

For a decade, the Primal House was home to a crew for whom “home” was a loose term. Most, if not all of them, were more at home jumping off a new cliff or skiing a first descent than anywhere else. If anything, the house served as a place to renew one’s energy.

The code of the house—something that went unspoken, but instead, was directly charged and recharged through each day’s adventures—was that one must stay true to his vision. Inevitably, this led the Primal House brethren to new places, larger but continually intersecting circles. It was all part of the progression.

Stay tuned for part 2 of The Primal Crew, which will run next week.