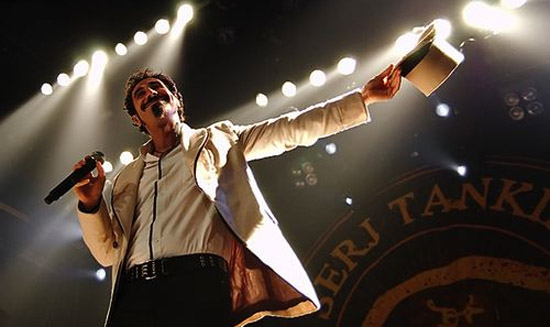 Serj Tankian. Photo of by CC_Baxter. Front cover photo of Coachella 2007 by Mick 0

Your pulse skips a beat when you imagine yourself dancing in those pink desert sunsets: aw yeah, it’s Coachella season once again.

The Coachella Valley Music and Arts Festival has evolved into the most diverse musical event in all of North America, and among the best of all festivals when you factor in the art installations and on-site camping. We’ll start with some recommendations if you’re a first-timer, then move on to our picks for the top 10 hottest acts.

Coachella is held in the desert terrain of Indio, California. Temperatures get hot during the day and chilly at night, so bring sunscreen, sunglasses and sweatshirts! It can get dusty too. Closed-toe shoes are recommended for heavy dancing.

Unfortunately, the free Coachella Express Train from LA to Indio is already at capacity, but check the carpool page to see if you can hook up with someone from your town! Another option: post a carpool request on the forums at matador.

There are five main stages and over 100 acts scheduled, so I’ve narrowed it down to 10 of the hottest, most diverse acts that you absolutely cannot miss:

This native Mississippian (A.K.A. Wes Pentz) juggles Dirty South beats (His album Florida musically captures the landscape of the swampy state.) mixed with Brazilian, Indian, and other multi-ethnic vocals.

He’s worked with everyone from M.I.A. to Madonna, and it’s not hard to see why—his stuff is simple but hits you hard. For a sample, check out www.myspace.com/diplo

Weird. At least, that’s what comes to mind at first listen to this Armenian-American musician from Los Angeles. Also the lead singer of System of a Down, it’s not surprising that his lyrics are politically critical (His new album’s called Elect the Dead).

Call it weird, call it punk, carnivalistic, or let me throw out “haunted,” one thing’s for sure: This is excellent music. www.serjtankian.com, www.myspace.com/serjtankian

There’s at least one great reason to check out this group on Saturday: bragging rights. Kraftwerk is a legendary band–one of the first electronic music groups, which formed in the early ‘70s. This group has seen an evolution of many albums and many different members, but maintains the basics: synth-pop with manipulated instrumental tracks and vocal distortion, creating some of the most unique music out there. www.kraftwerk.com, www.myspace.com/kraftwerk 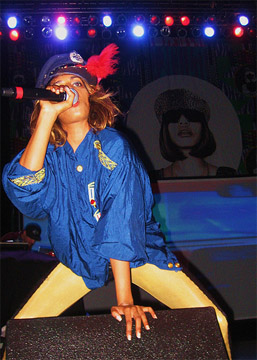 This hot star on the rise has a sultry, tough style. Some of her lyrics are most certainly influenced by the fact that her family fled to London from Sri Lanka in the height of civil war, when she was just 10 years old.

She flaunts a crazy individualistic style in both fashion and music; her beats and rhymes are fresh and original. www.miauk.com, www.myspace.com/mia

If you feel like shaking your ass, check out Baltimore’s Animal Collective. They’re not your average, easy-going jam band, I’d say, but quite experimental and complex.

Trying to follow the lyrics through the rhythm and melody is like trying to find your way out of a labyrinth. www.myspace.com/animalcollectivetheband

Twenty-year old Kate Nash will steal your heart with her rockin’ voice and irresistible British accent. She’s not exactly your sweet little girl with a guitar, however; some incredible back-up artists and a spunky style give her folk-pop songs an indie edge. Her lyrics can be ridiculously funny in that British way. www.katenash.co.uk, www.myspace.com/katenashmusic

You know you’ve got an interesting group on your hands when you find out that they started out as a back-up band for burlesque shows, and that their name comes from Nadsat (Anthony Burgess’ made-up language in A Clockwork Orange) for “young girl.” This quartet is a cocktail of sounds: gypsy, Greek, Bolero, Mariachi, punk, and folk, and yet all of the mishmash doesn’t take away from their delicate and melodic, almost classical style. www.devotchka.net, www.myspace.com/devotchkamusic 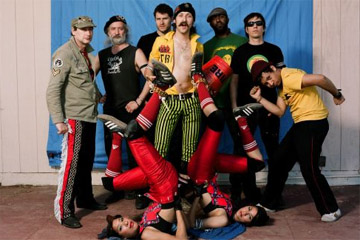 Creating more of a funky cabaret experience than a concert, this self-described “gypsy punk” band will keep you laughing and dancing all-show long. A mixture of Eastern European street sounds (with traditional instruments such as accordions, fiddles, etc.), electronics, and a little punk to lace it all together, the energy of this conglomerate of musicians is through the roof. www.gogolbordello.com

My Morning Jacket got their name from “MMJ,” the initials found on the lining of a jacket found in the ruins of the lead singer’s favorite bar after it had burned down. Combining the drawling Southern rock influences of their roots (Louisville, Kentucky) with more progressive, reverb-drenched tones, this group will leave you wondering where the merch table is. www.mymorningjacket.com, www.myspace.com/mymorningjacket

All live music fiends know (or should know) who Roger Waters is, and somewhere at the core of our musical fabric of being is that lingering sentiment: “Damn, it would have been so cool to see Pink Floyd live.” Unlikely for our generation, but Waters, the ever-dedicated former Floyd singer, has been touring Dark Side of the Moon Live since the summer of 2006. Don’t miss it. http://www.roger-waters.com, www.myspace.com/georgerogerwaters

Have an awesome time at Coachella 2008!

What did you think of this article?
Meh
Good
Awesome
Bookmark
Posted In
Events + Festivals