I’LL NEVER FORGET my first time at Burning Man. To be honest, it was more memorable than my first sexual experience. I was a playa virgin in 2010, and when I returned home to London I realised how much the event had affected my life. My British reserve had been dissolved by insistent dust leaving me more open to strangers, even on the tube. Plus it had given me the urge to put a creative project into action, rather than just keep it as a thought starter in my notebook.

My photographer friend Coralie Thabot and I decided that at the next Burning Man we would do a project together — her photos, my words. The theme for 2011 was ‘Rites of Passage,’ so it seemed fitting that the subjects of our project should be Burning Man virgins, especially as we had recently lost our Burner virginity ourselves.

The beauty of the playa seems to provide what one wants most of the time, and before long we found that the people who were the most interesting subjects for photos were also virgins. These ranged from the expected topless young women, to the unexpected guy in his 60s who was accompanied by his son.

Scratching under the surface of the costumes, the banter and the nakedness, I discovered alarmingly honest people who wanted to share their anxieties just as much as their bravado. Hearing these personal journeys through this overwhelming rite of passage was surprisingly comforting, as their emotions struck a chord with mine, making me feel even more a part of this life-changing experience. 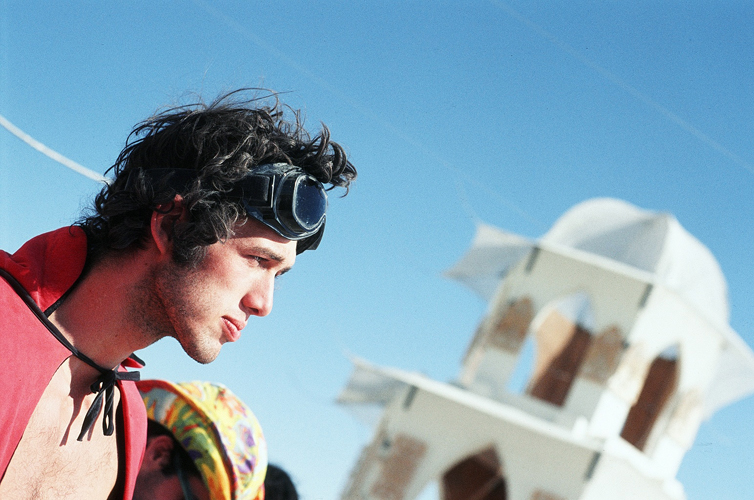 Danny's first time was painful. Even though he was a virgin, he'd already braved the hardcore clutches of the bitch that is the Thunderdome, and bore the little scratches to prove it. He wanted you all to know that his opponent wasn't a woman, but a great big hulk of a dude. Ouch. 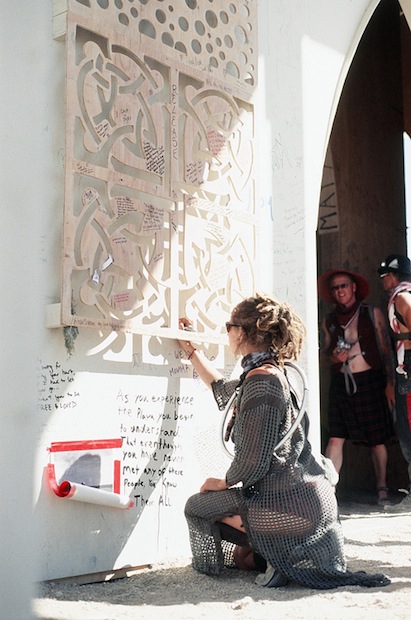 The moment, for Root, is eternity. Her Mum died 6 months ago. It's the reason she decided to come to Burning Man this year for the first time. She wanted release from her pain and a bit of therapy. She didn't write personally to her Mum on the temple, because she had time to say everything she wanted to her before she died. She just felt the need to share what she'd learnt from her experience. 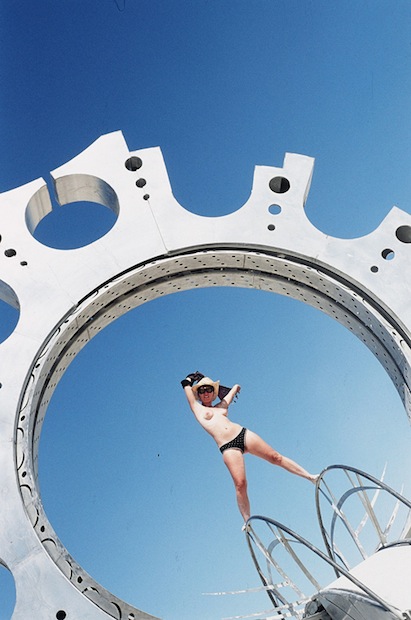 Claudia isn't a dancer. Even though she moved her body at one of the playa's many 'photo opportunities' as fluidly as if she was. She said, "The space just makes me do that." If you could sum up Burning Man in one sentence, then that comes pretty close. 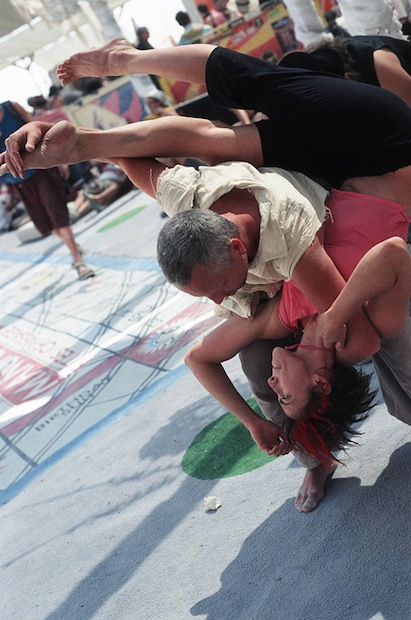 Rachael was born to go to Burning Man. After all, she's a dancer and a nomad. Here, she's doing what she called 'contact improvisation' with Karl in the middle of Centre Camp. She's been practicing and teaching the form for over a decade. It looked like two people completely in sync with each other and in total trust. Shame they're just friends really. She described it as a physical practice of listening. 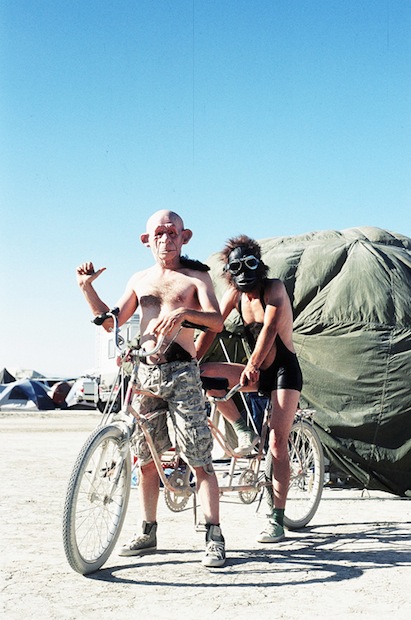 Matthew took over 10 years to lose his virginity. He'd never been able to come before, because he couldn't afford it. Luckily, this year, his friends offered to pay for him. He had no expectations, as he wanted it to be a blank canvas, which could only be marked by his own experience. He felt like he was participating and helping to create it all, just by being there. Although next time he comes, he wants to set up a camp that pimps your ride. 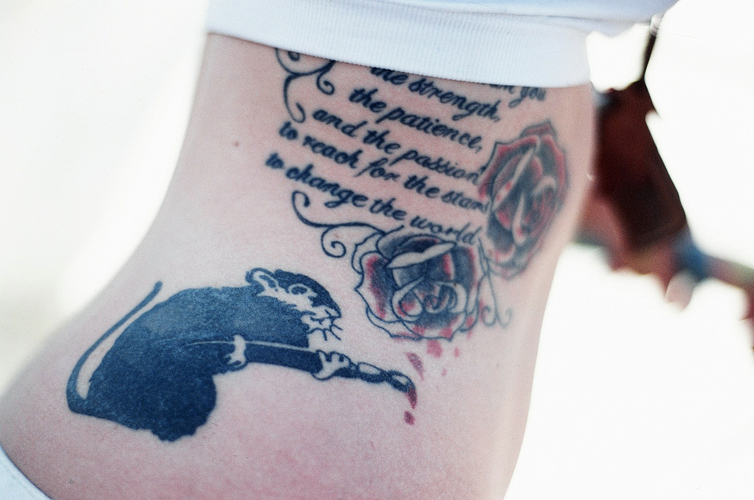 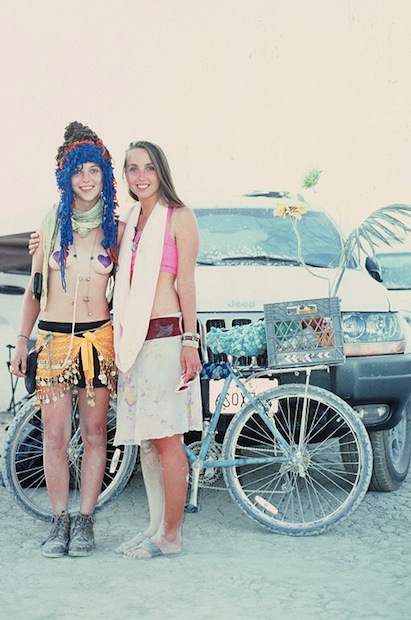 Jade found us. She came riding up on her bike and asked, "Are you looking for someone?" in her siren-like voice. Turns out, she's a virgin, a twin, and makes organic chocolate. Who wouldn't be looking for her? She'd been riding around solo and said she didn't know what to do with herself. Jasmine found Jade. She'd been out with friends, and was reunited with her twin. In contrast to Jade, she thought her time at Burning Man was opening and freeing, "Definitely a rite of passage." They'd both been adopted by the 'Twin Freaks' theme camp, which seemed to have been waiting for their arrival. 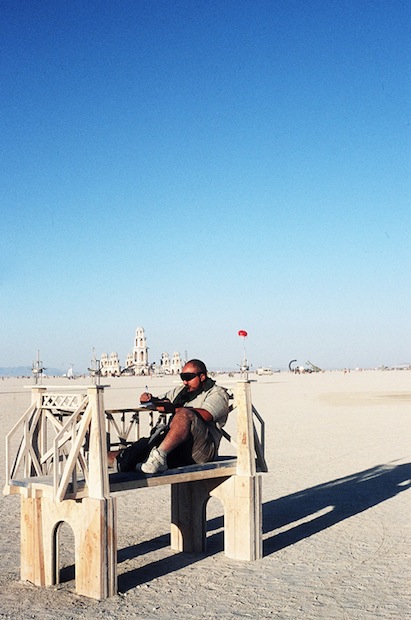 Fuck it, just do it. That was Anthony's reason for not being a virgin any longer. He was looking for a massive party, as he'd just got out of a relationship. Yet his first time came to mean so much more than "staring at breasts." Overwhelmed by feeling both a sense of community and loneliness, he was quietly reflecting on his experience. He wanted to share it with his mates back home, but only on the condition they respected that, "Hey, this is mine." 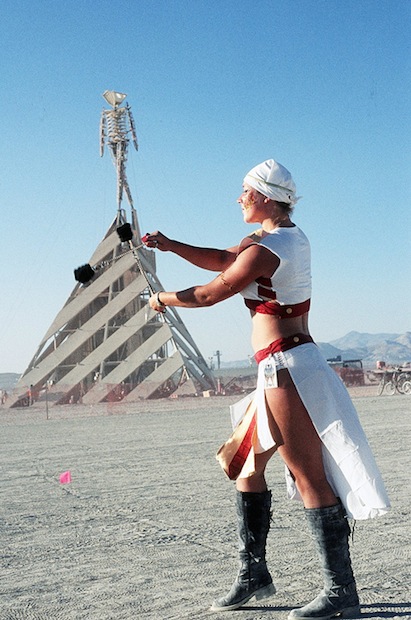 Olya's first experience has been enlightening. In the dark world of work she's unemployed, but here, she's served in cafes, been a lamp lighter, and performed to crowds by spinning fire. She came with one group of people, but has hung out with anyone but them. She said she's been through, "a spectrum of emotions," although at least she found the big smile at the end of the rainbow. 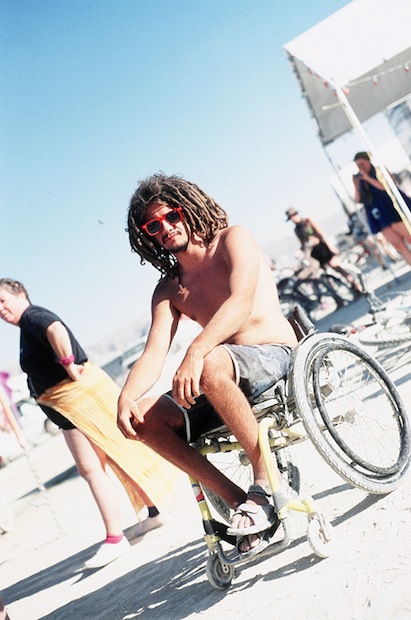 One of the best parts of Antoine's first burn was getting around. His method was energy efficient, resourceful, and pleasurable, like all the great things at Burning Man. He just held onto a piece of wood attached to a rope tied to his mate's bike, and got pulled along in his wheelchair. Forget waterskiing, welcome to dust surfing. 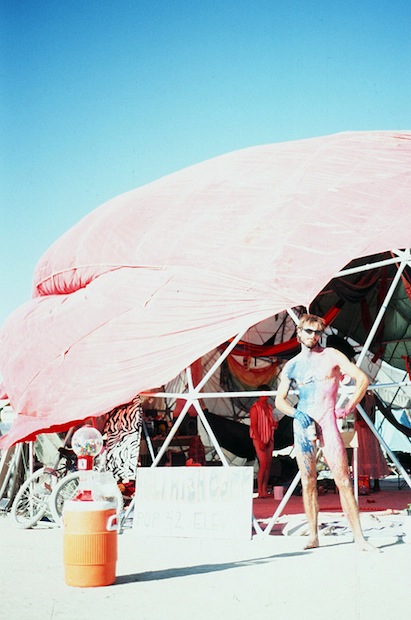 Johnny was supposed to be in school. But this year he graduated to the playa. He usually misses Burning Man because it's the first week of his term teaching physics, biology, and maths. This time, though, he extended his holiday, as he couldn't wait any longer to strip naked, get painted, and run around in the desert. If only the kids could see him now, in his true colours. 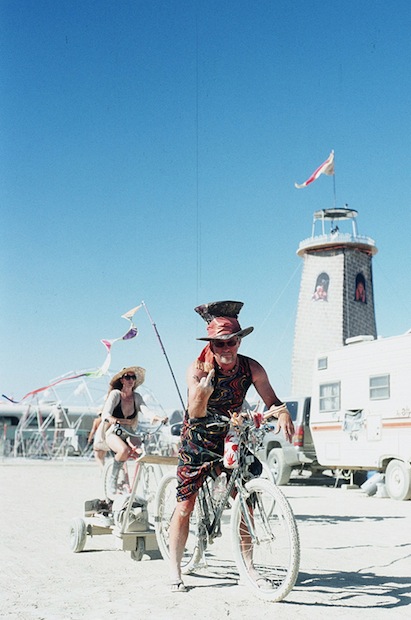 Virgin Jeff had been waiting to come for 8 years. The reason for the delay was his wife. She finally let him go this year because his brother had bought him a ticket. He wanted to come to be free. To drink, take acid for the first time, and get a temporary girlfriend. Just what was his wife worried about all this time? Like a Child Catcher for women, but a lot more cuddly, his bike was equipped with all manner of gadgets and gizmos to lure in the ladies. From massage oils, tiaras and Barbies for killing, to lint brushes, sunglasses, and tyre repair kits. Shame he forgot the wet wipes. 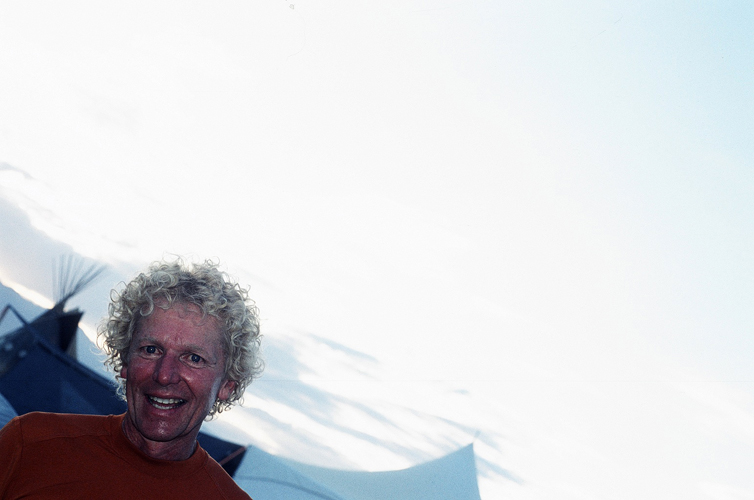 Danny was quite philosophical about his first time. But that may have been the LSD talking. Or the cabernet sauvignon. He described his experience as a battle between the interface of the body, mind, and spirit. He saw it as an allegory of shedding, getting rid of extraneous things and responsibilities, "So just for a moment, I can be where I want to be and do what I want to do. Usually I do things for other people, but this is for me." Whatever else he's shed, he's definitely lost his virginity. 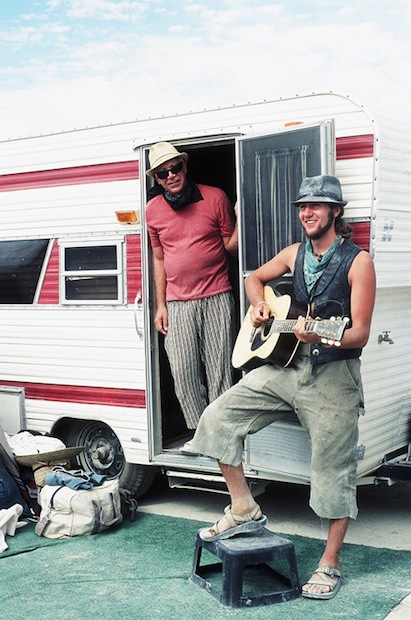 Peter and Mateo, Arizona and Oregon

Not many 23-year-olds would go to Burning Man with their dads. Let alone if they were both going to lose their virginity. Yet Mateo's dad was part of the reason why his first time at Burning Man was more memorable than his first sexual experience. Well, if Dad tries MDMA, dances his ass off at Fractal Nation, and makes margaritas for breakfast, you're not going to forget it in a hurry. The last festival Peter went to was Woodstock in 1969 where he got his butt out. 42 years later, there are no buts, and no ifs either. 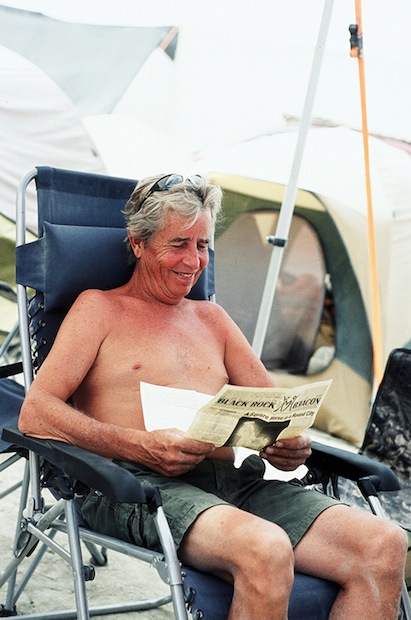 Jon isn't a pure virgin. He crashed the Burning Man party in 1991 for 2 hours, after coming to Black Rock desert to windsurf, bathe in the hot springs, and explore. And what sights he must have discovered. Back then there weren't any rangers or guards and people parked right next to the 'happenings.' He always wanted to come back, but when Burning Man wasn't on. Just to see the desert. This was his reunion with Black Rock and his cousin, Daniel, who he's only seen twice in 35 years. 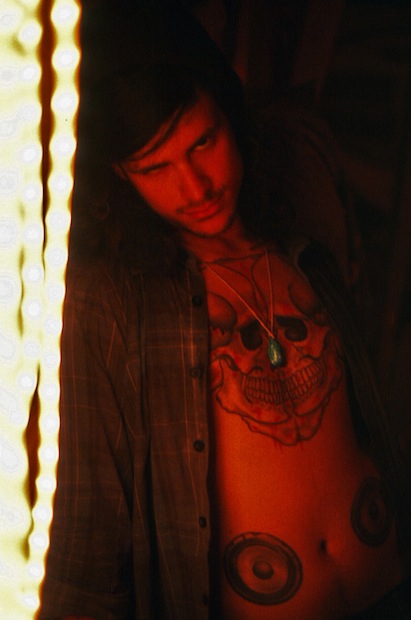 Morgan is made from playa dust. The air changes when he's around, making it a little harder to breathe. His actions stick fast to people's soles. He blew in through the gates as a whirling dust devil, spitting out entertaining distractions. That's how he got in without a ticket. That's one story anyway.

Tagged
Travel Nevada, United States
What did you think of this story?
Meh
Good
Awesome