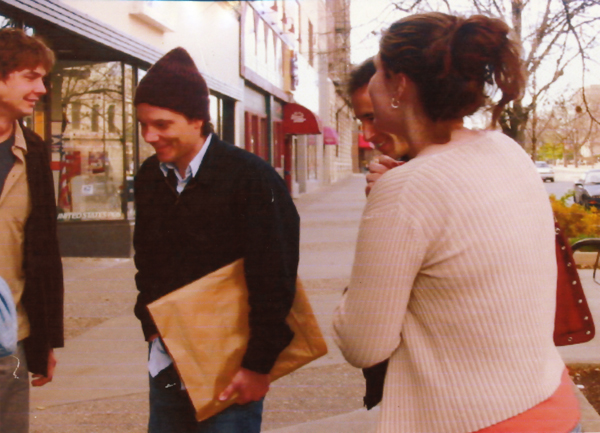 After following the band around during the previous year, hitting shows as far away as Boulder and Indianapolis, I was especially elated that as one of the managers of the radio station, I might have a chance to meet my idols after the show in the stuffy, badly soundproofed student union ballroom.

I invited all of my Wilco fanatic friends from Chicago. They arrived in a station wagon the day before the concert, slept on the shabby carpet in my dingy apartment, and in the hours leading up the show, our gang of eight meandered around downtown, killing time.

Stepping into The Record Collector changed our lives. Put off by the snob vibe and tragically uninterested in vinyl at the time, it was only the second time I’d bothered to go in, though a friend worked there and was behind the counter that afternoon. “Look in the back!” she hissed at me, eyes wide as she looked from me, to the rear of the small shop, and back again. Flipping through dusty crates of cardboard sleeves was Jeff Tweedy. 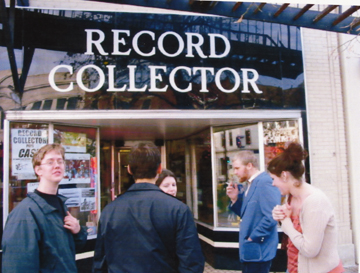 I am the dark haired girl smack in the middle here. It’s
possible that the image doesn’t show my teary eyes,
but they are seared into my memory.

As word of what was happening spread to my friends, we froze in succession, clustered at the front of the deep, narrow store. There was nowhere to go. I stepped forward without thinking and approached the living legend. As he looked up, I burst into tears.

Jeff Tweedy stared at me, a mix of horror and embarrassment, as I attempted to pull myself together.

“I really… love your music…” I stammered, unable to make eye contact.

“Don’t cry,” he insisted, clearly uncomfortable and wishing there was an easier escape than the now-far away doorway at the other end of the oblong shop. His bandmates were nervously watching us. I took a deep breath and tried again.

“My friends all came in from Chicago for the show,” I said, motioning to my stunned posse as evidence.

He nodded and started to move towards them. I walked with him as my empathetic friend, the store clerk, stepped forward with her digital camera. As I pulled myself together, our group assembled in front of the shop and a number of pictures were snapped of the young band of groupies and the seminal folk-rock group.

The photos offer a strange glimpse into our collective history; most of us look confused and disheveled — including the band members. The shot of Jeff Tweedy and me is appropriately blurry. In the others, my face is red, streaked with tears and shadowed by shame I will never outlive.

This is the second in a regular series on MatadorNights made possible by you! Even if you can’t write, you can participate. Find out how at Brush With Fame: Your Stories Wanted.

Got a word of comfort for Brittany? Let her know in the comments below.

Tagged
Narrative Humor
What did you think of this story?
Meh
Good
Awesome