THIS YEAR THE Stampede took place between the 8-17 of July. Part rodeo, part county fair, the event brings serious horse riding, pageantry, and carnival rides together with music, First Nations people performing traditional dances, and tournaments. This year, $2 million was awarded in prizes in rodeo tournaments with categories like barebacking, horse cutting, and tie-down roping.

Here are a few shots from my day at the 99th annual Calgary Stampede, from noon to night. 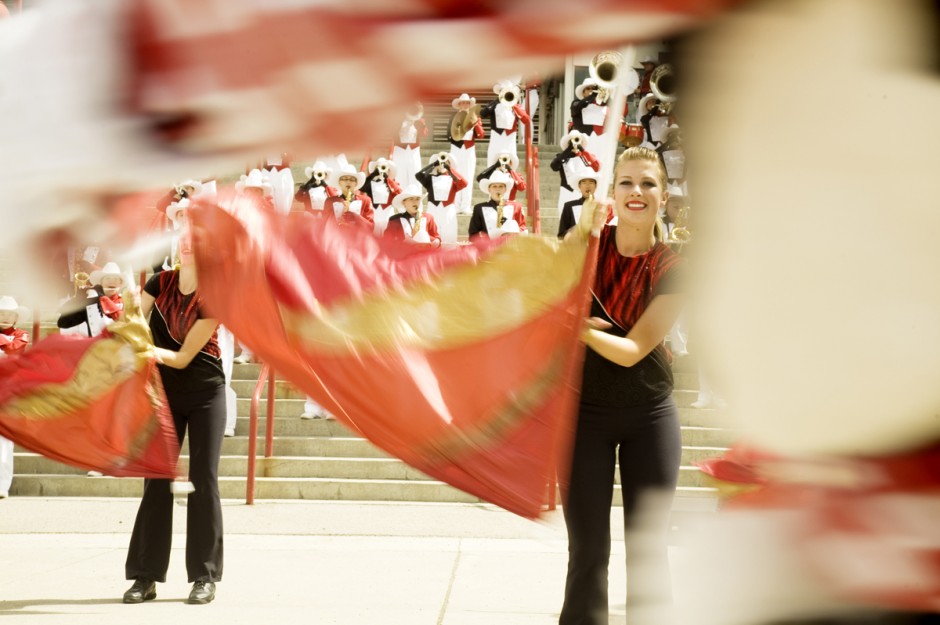 The Calgary Stampede Showband makes over 200 appearances throughout the Stampede, performing for crowds at the Rodeo, Grandstand Show, and the Saddledome steps. 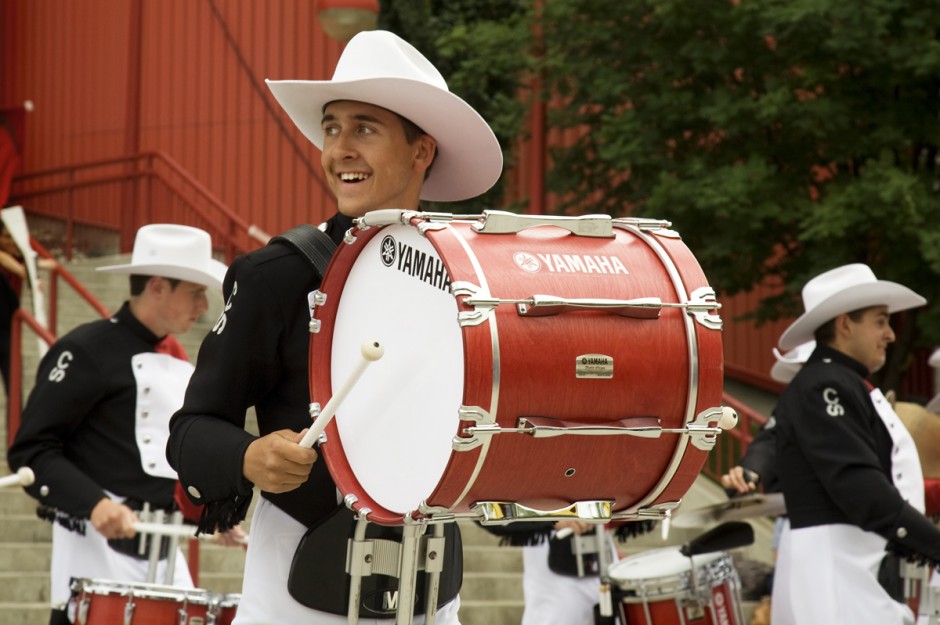 Musicians of the Calgary Stampede Showband performing for the crowd. 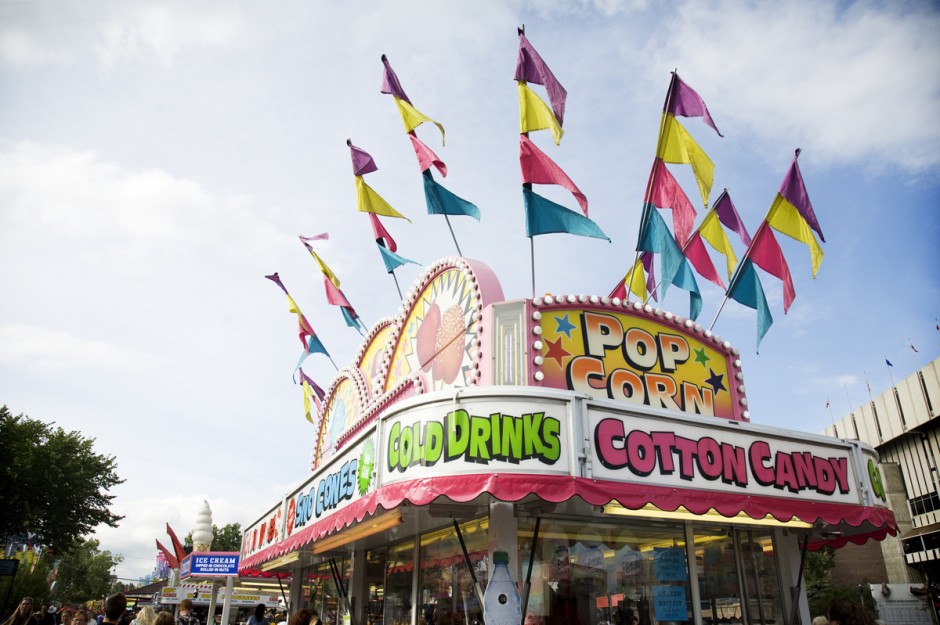 The Midway of the Stampede grounds is chock full of food & beverage stands where any cowboy can refuel in between rides. 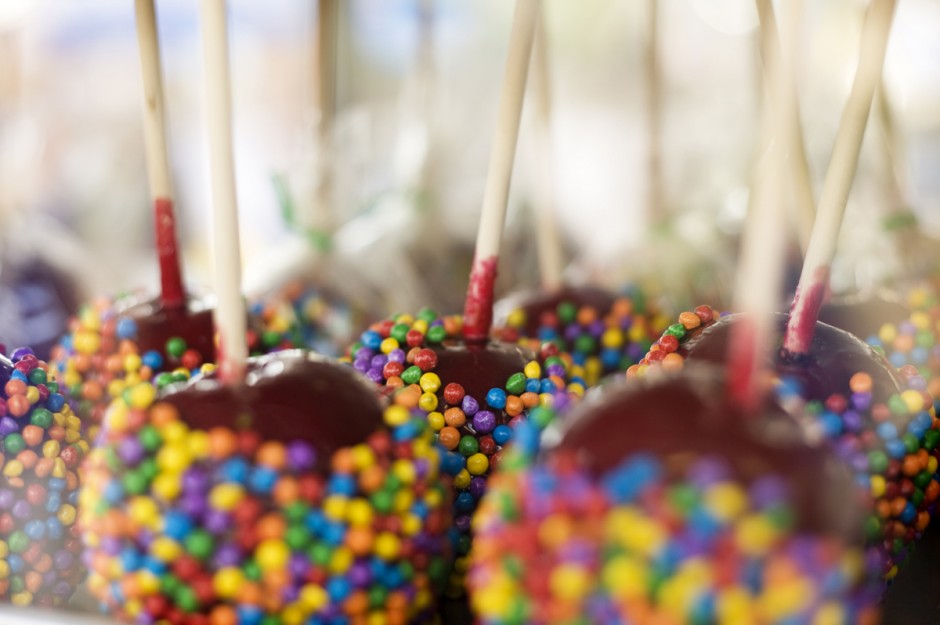 Eating at the Stampede can be an adventure. You can try a doughnut burger or deep fried pop tart, or you can also opt for a classic bag of mini doughnuts, or a candy apple. 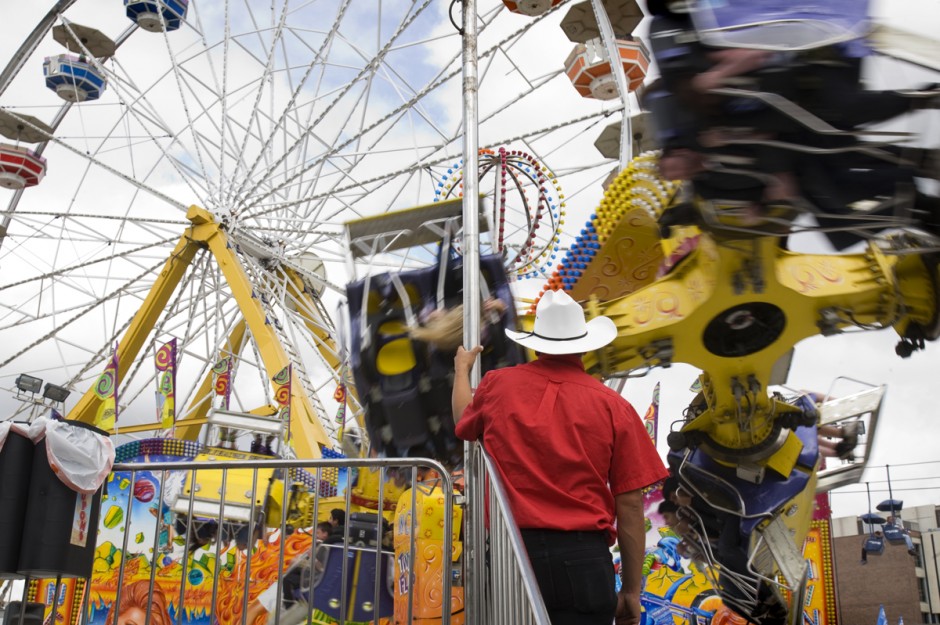 The Sizzler, Mega Drop, and Freak Out are names for ways to make your day a little more exciting. 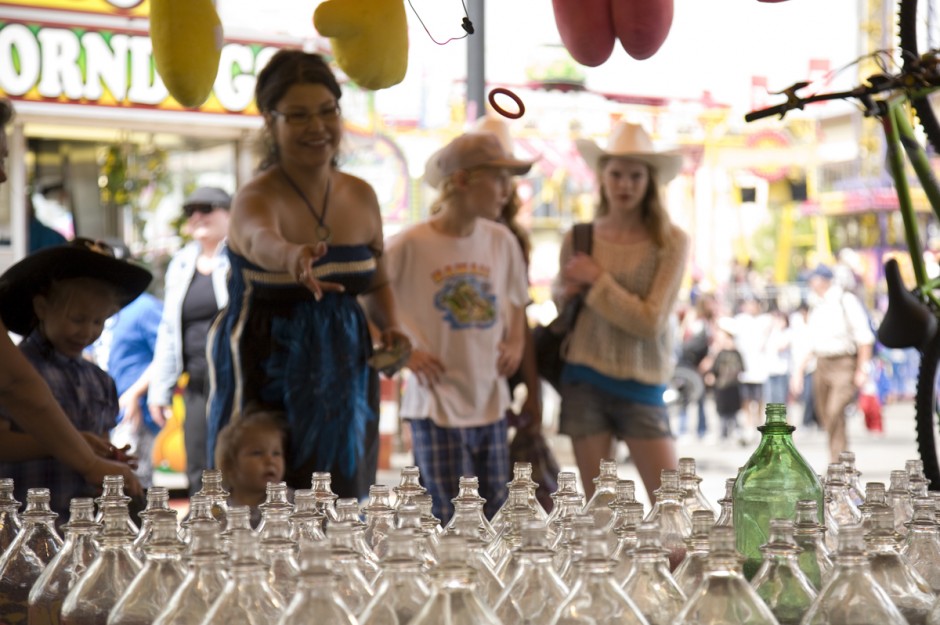 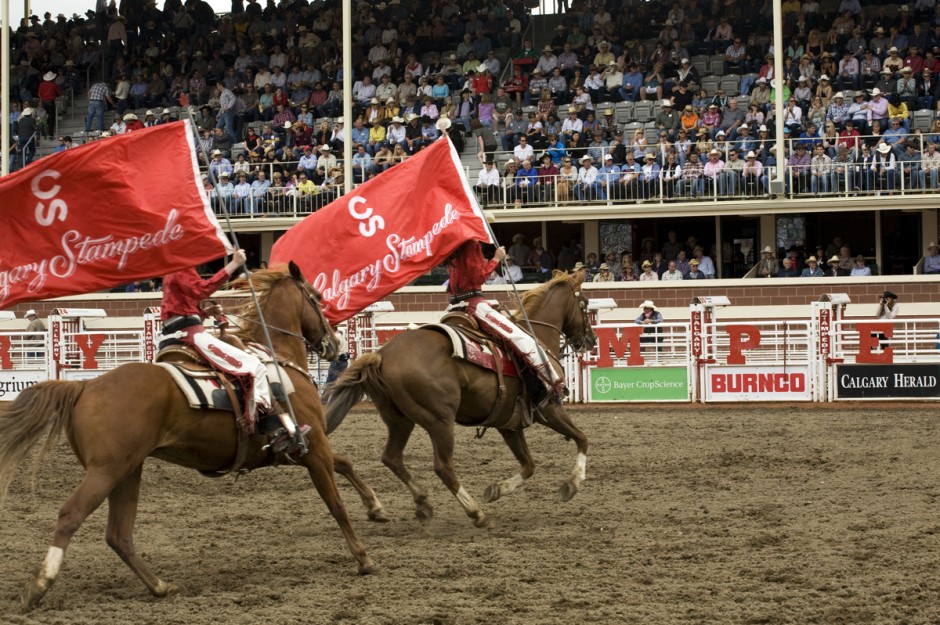 Spectators come from all over to watch the Calgary Stampede Rodeo. Here the world's best rodeo athletes compete tournament-style across many categories. 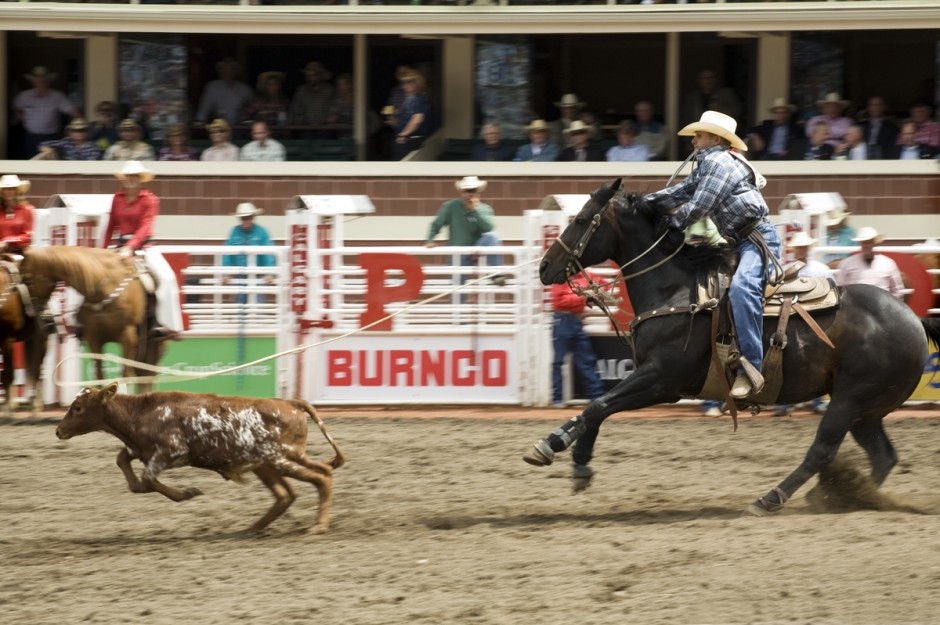 Tie-down roping requires very strong hand eye coordination and timing. It's one of the most technical Rodeo events. 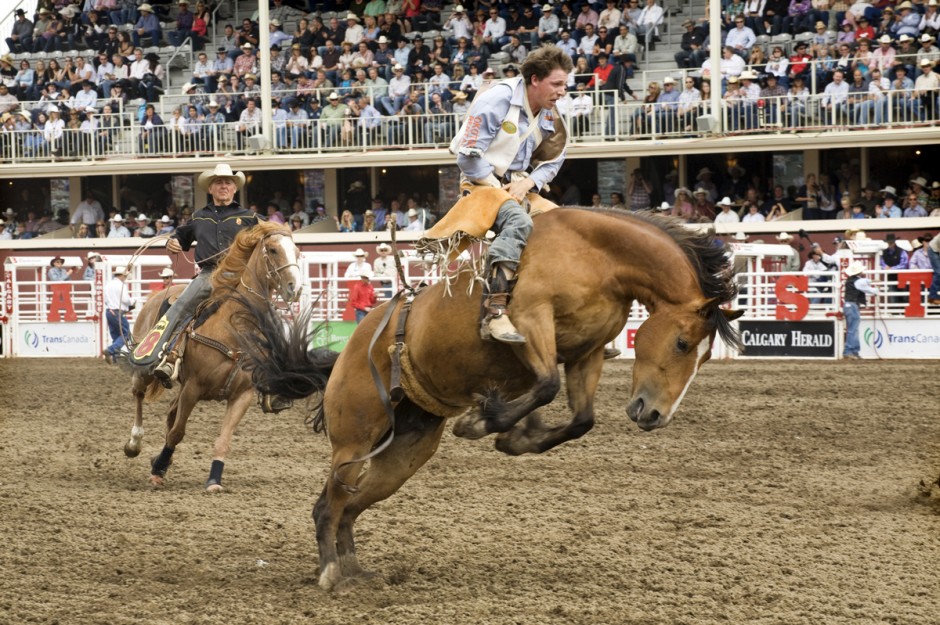 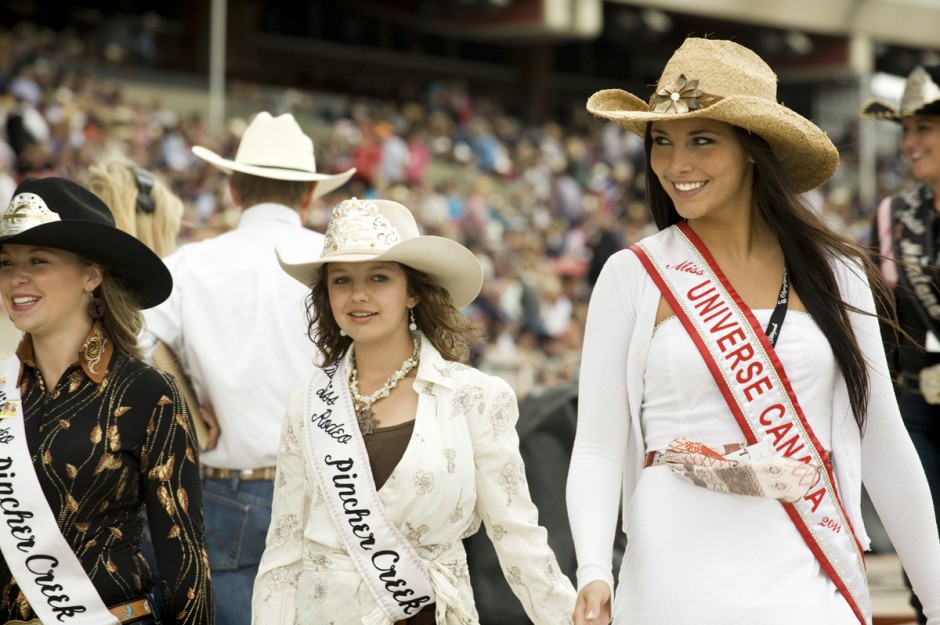 The Calgary Stampede Rodeo features a mix of performances and guest appearances, such as that of Alberta's own princesses, and Miss Universe Canada. 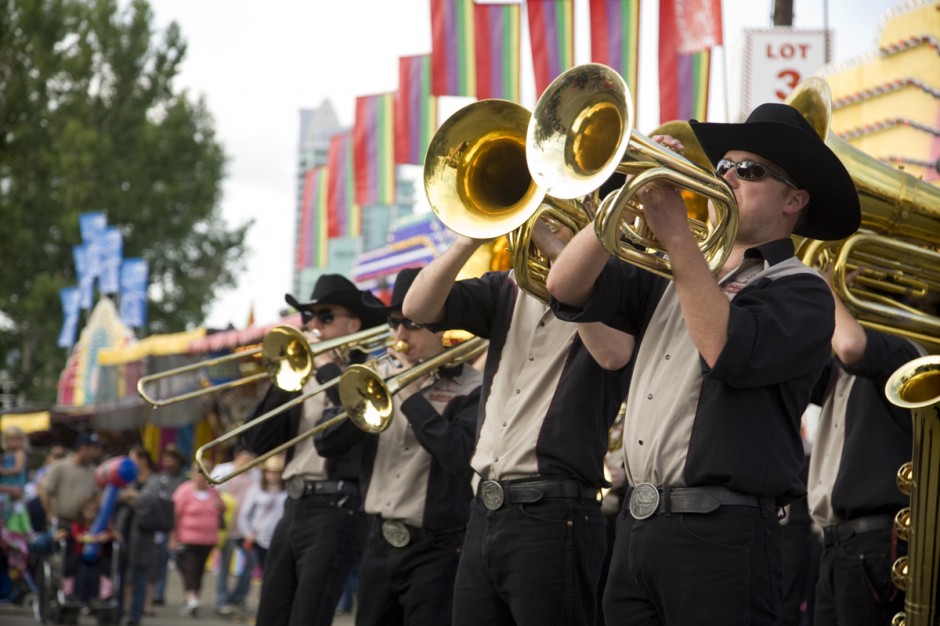 A Band of Outriders delights the crowds with Midway musical performances varying in genres from western to pop. 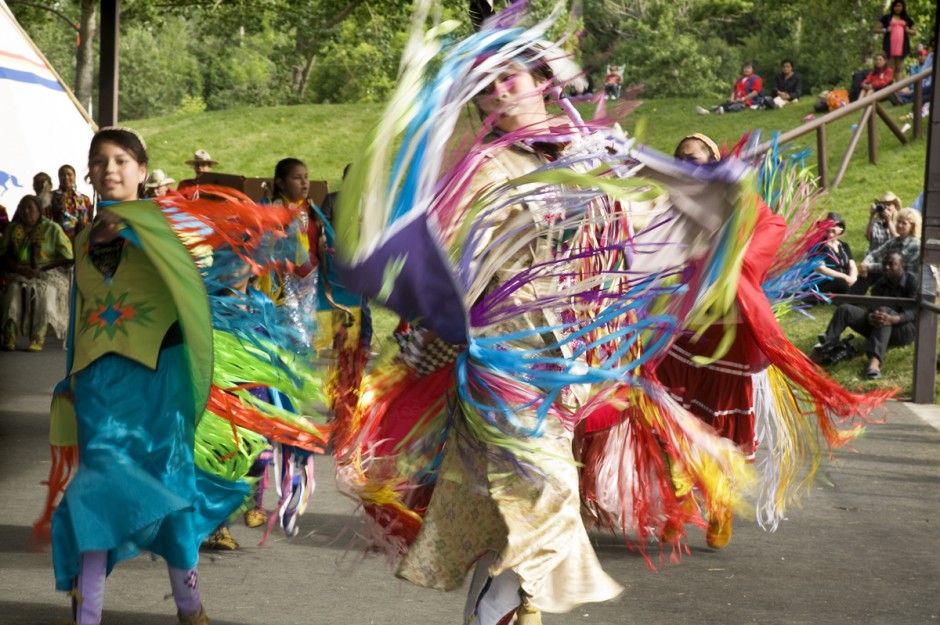 The Indian Village offers demonstrations of traditional dances for the crowd. A part of the Calgary Stampede since 1912, the Village holds daily activities such as hand-games, tipi raising, and drumming. 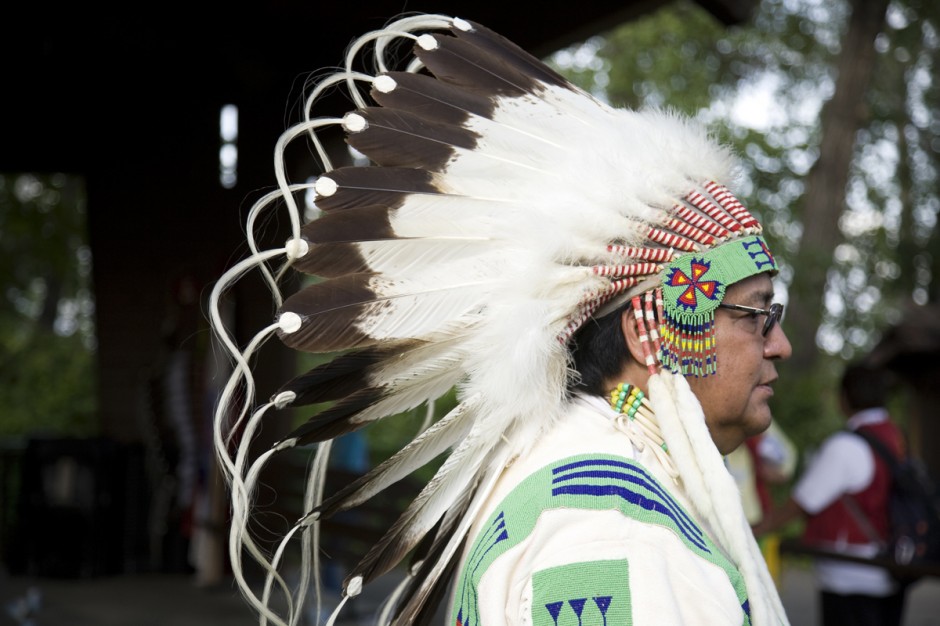 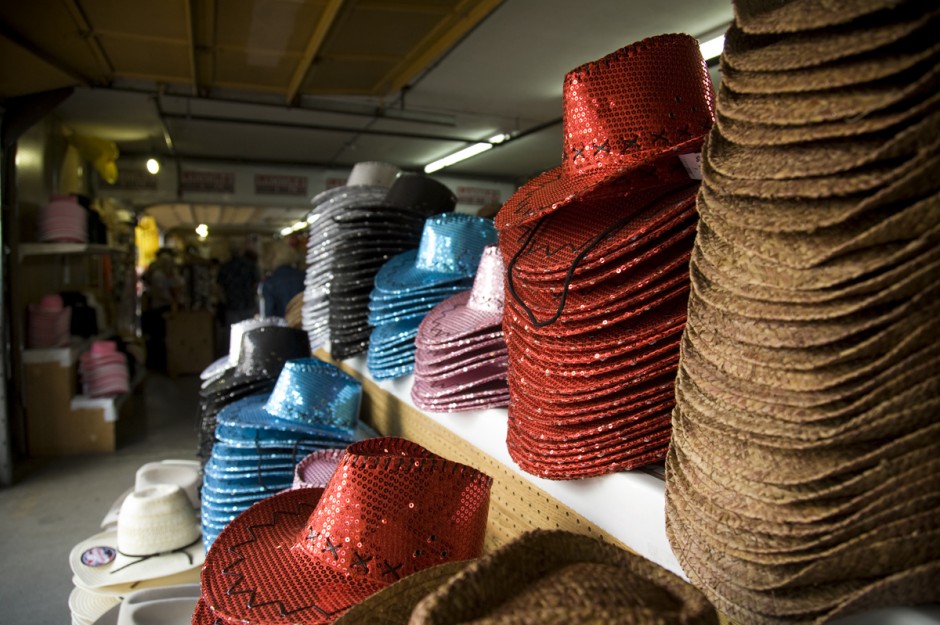 If you're not feeling cowboy-ish enough, hats can be snagged at souvenir shops all around the grounds. 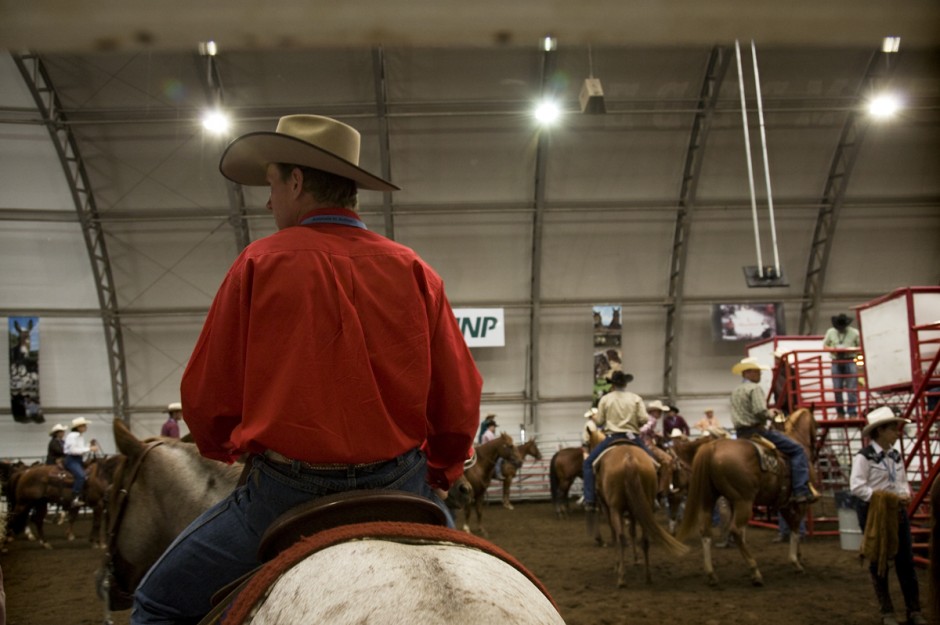 Riders in the Big Top prepare to take part in a Cutting Horse Competition, where steers are separated from a herd by a rider and his horse. 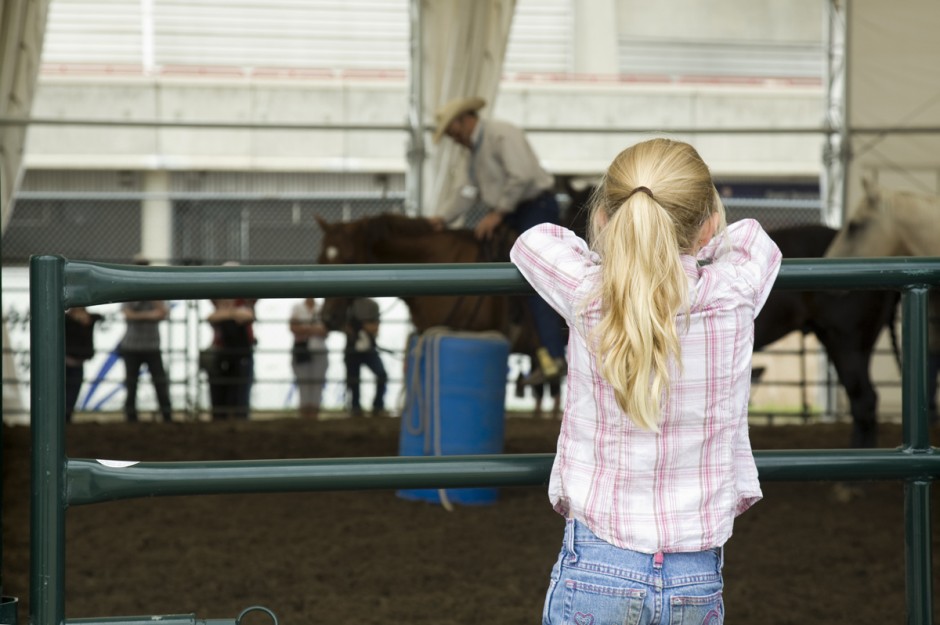 A young spectator takes in Horses in Action, a demonstration at the Northern Lights Arena. 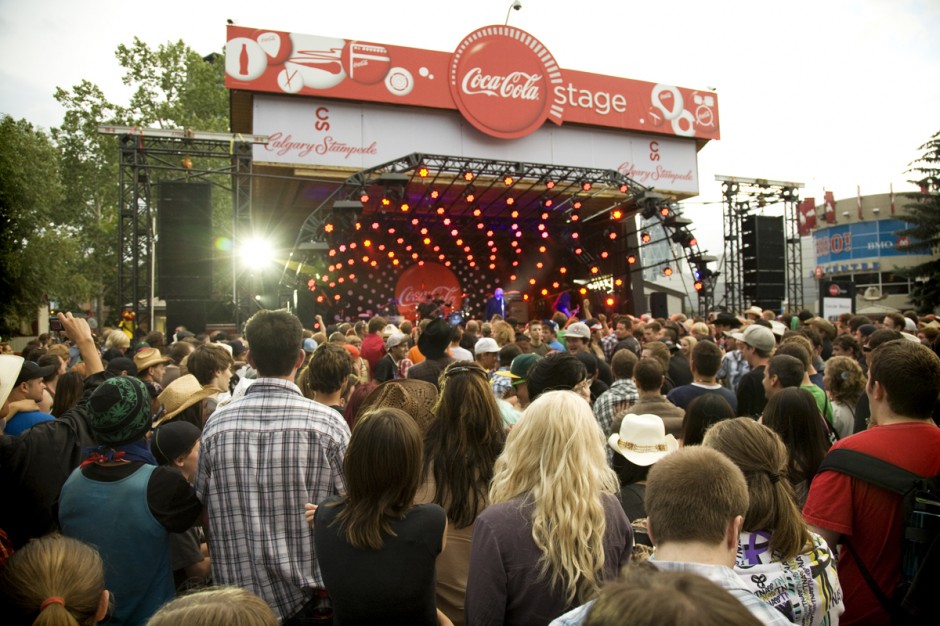 The Coca-Cola Stage puts on popular music acts, free with grounds admission throughout the 10 days of the Stampede. 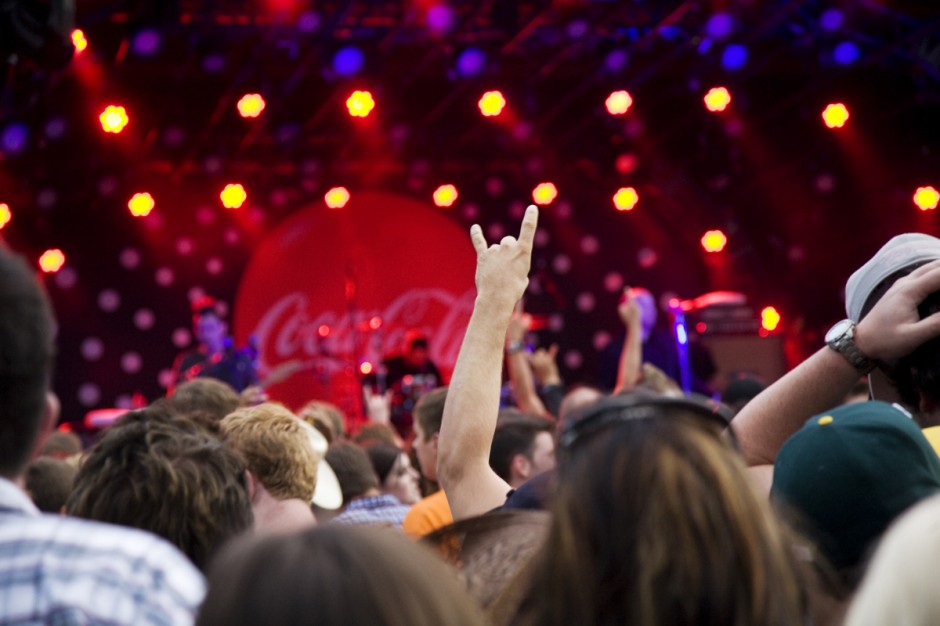 Spectators surge with energy as Finger Eleven performs on the Coca Cola Stage. 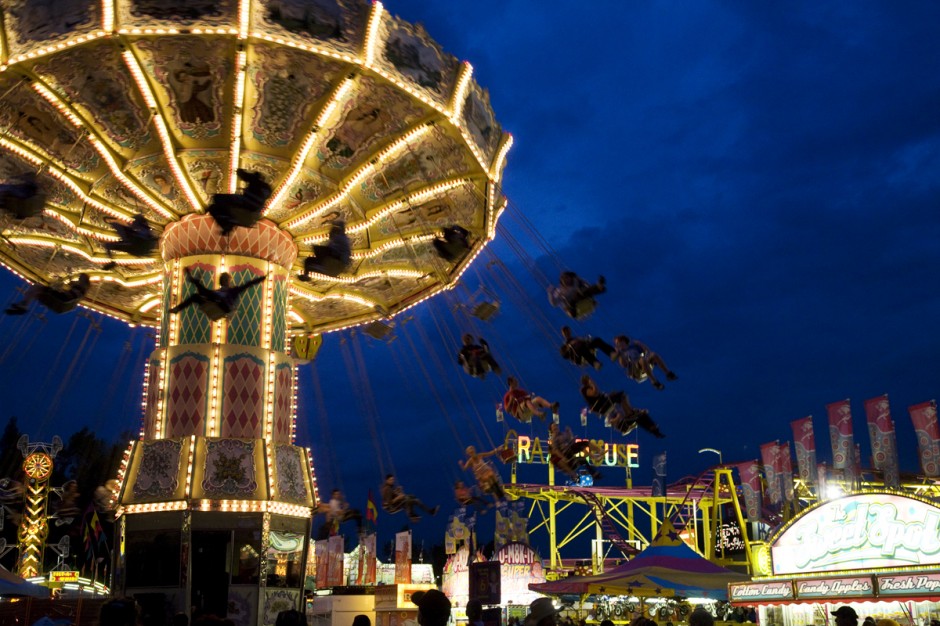 Once it's dark, the Midway lights come to life. 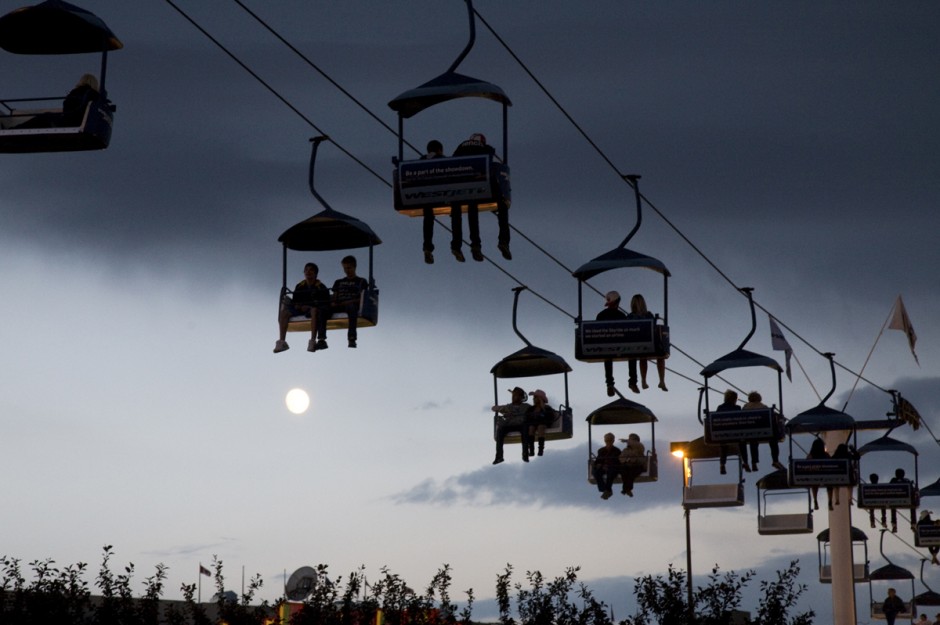 The best way to take in the view of the grounds is to buy a ticket for the Chair Lift that carries you across the span of the Midway. At night, you can see the entire park lit up.