SAN SEBASTIAN, SPAIN, is an elegant city. These places are not. This guide will show you a grittier side of Spain’s most elegant seaside city that most tourists don’t see.

San Sebastian (called Donostia in Basque) is at once very touristy and extremely local. Foreigners and donostiarras tend to run in different circles and most visitors never escape the warren of touristic bars in the parte vieja (old town). It took me six months of asking around before I moved beyond the anglophone bubble into tabernas where locals go to get down.

I’ve posted the fruits of that half-year search here. Most nights begin with eating pintxos and move quickly into bar-hopping bacchanalia. So I’ve put the pintxo spots first, most of which close around eleven. The other seven bars close around 3AM.

When partying, I always start at the Mejillonera around 9PM. Each night, this busy seafood joint buzzes with locals slurpin’ down €3 plates of mussels and patatas bravas (potatoes with secret sauce) – hence the floor covered in beer and discarded shells.

Cheap food, free bread, and 1-liter catchis of beer for €3.60 makes this the ideal place to fill your stomach and kick-start your buzz.

Most of San Sebastian’s pintxo bars are quite fancy. Bar Gorriti is not. Vagrants and working men alike come here for pintxos and drinks well within their price range. Local tip: maximize your bar-hopping budget by ordering a half-beer, called a zurrito. 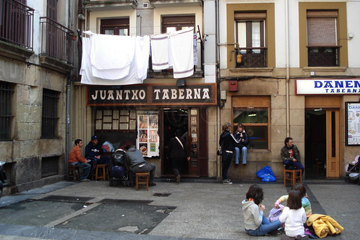 Shifting from food to party, we have Juantxo Taberna. Famous for their €3 bocadillos (submarine sandwiches), Juantxo’s is always brimming with donostiarras drinking cañas (pints) of beer at any time of day. As dining shifts to drinking, the boisterous crowd flows into the street.

In fact, boozing in the street is essential to a night out in San Sebastian. Though technically illegal, outdoor pre-parties are an institution warranting their own name, the botellón.

Thrifty locals converge at the port between 11PM and 1AM before hitting up pricier bars. Follow their lead and make yourself a kalimotxo – equal parts of €1 boxed wine and Coca-Cola, served with ice in a plastic cup. Yum. 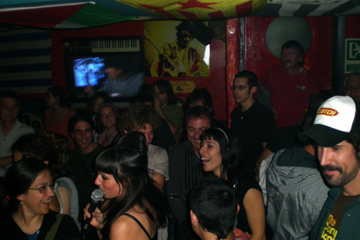 The singer from Charly and Pavlyuchenko gets down with
the crowd at Leize Gorria.

If it’s after midnight and you’re properly buzzed, you can head to the Parte Vieja for more trouble, starting with Hamabost. This place is perfect for knocking back chupitos (shots) while overlooking the Plaza de la Constitución as the DJ jams the deep cuts of classic rock. And there’s plenty of space in case you’re rolling deep after the botellón.

Next, you can grab the baddest-ass dudes from your crew and go to Zunbeltz, San Sebastian’s most nefarious metal bar. The above-average amount of hair, leather, and facial piercings of its patrons makes it easy to spot.

Stepping inside is like entering a time capsule from 1982 where guitar solos and stiff whiskeys drown out the shitty euro-pop of nearby discos.

Calle San Juan de Bilbao is not everyone’s cup of tea. The street’s overt Basque nationalism might put some people off, but the half-dozen bars here are as local as it gets.

Either way it’s wise to read up on the Basque Country’s political situation before visiting. Crowds tend to migrate between Herria Taberna, Suhazi Taberna and their smaller neighbors. All are safe bets.

Akerbeltz is a gay-friendly bar that’s a good time for anyone. This local favorite is a stone-hewn grotto centered around a marble horseshoe bar, replete with Neolithic cave art and drinks strong enough to knock you into the stone age.

In summer the party spills out into the nearby staircase. Feel free to do the same. 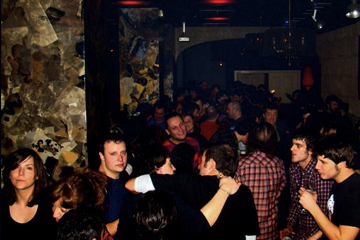 Up for a hike? Leave the parte vieja behind and cross the river to the offbeat barrio of Egia, home to Le Bukowski. This popular dive is famous for live music, good tunes and great times – and the highest concentration of skinny jeans and plaid shirts in town.

The young, welcoming crowd puts down €2 beers ’til 5AM — two hours later than any other bar on this list. Weekend ambiance rotates between non-techno dance parties and live music (usually with €5 cover). Check out the events calendar here. 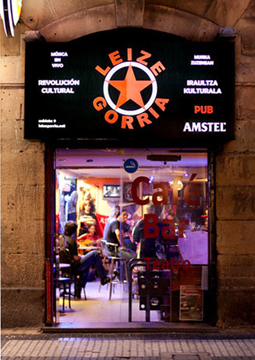 If everyone drank at bars like Leize Gorria, perhaps the world would know peace. The bar’s Uruguayan owners are fighting the good fight from their subterranean casa cultural, a “free and open forum for self-expression and intercultural exchange.”

There’s live music all weekend, but Monday and Thursday nights’ Jam Sessions best embody their faith in the universality of music. Anyone can pick up a guitar and chant down Babylon with the crowd — including you. Don’t be fooled by the empty ground-level bar. The real party is underground.

When you eventually rise to the sunlight, wash away your hangover with a cafe con leche and a slice of tortilla at San Sebastian’s hippest cafe-cum-bar, Koh Tao. Jump in the ocean, take a siesta, and start all over again. Repeat enough times, and you may never leave San Sebastian.

A Mix of Surf and Culture in Northern Spain