In 1958, anthropologist Clifford Geertz conducted a well-known study on Balinese life. For the first weeks of observation, the residents of the village where he and his wife stayed went out of their way to ignore the two interlopers.

Perhaps the only note Geertz had the opportunity to record between the time the couple arrived and the day they were finally accepted into the community was “the Balinese display an extreme distrust of outsiders.” 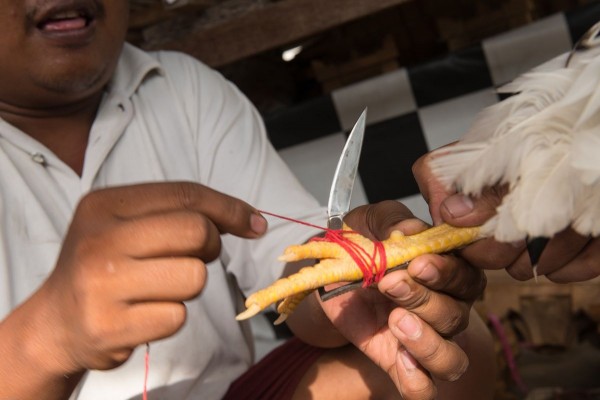 The Balinese tradition of tying steel blades to the feet of cocks for fights is different from other Indonesian islands, where the animals simply peck each other until one is exhausted.

The couple’s welcome did not arrive until the village hosted a cockfight to raise funds for a local school. Friends, family, and neighbors gathered in the banjar, placing wagers as round after round of roosters, with small blades tied to their feet, kicked each other to death.

It was the middle of a match when the police arrived. Someone forgot to pay off the local officials, and the “storm troopers” had come to collect. Machine-gun-toting officers ran to the middle of the arena, barking orders and waving their weapons around in the air. 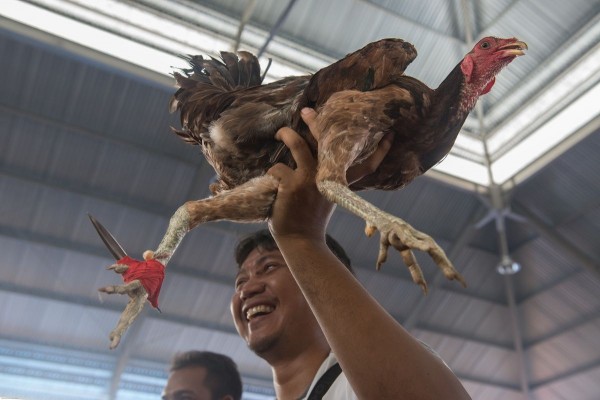 A man holds up a bird that he is about to enter into a fight.

The Balinese responded to the intrusion in the only logical way one can when angry men carrying guns crash your peaceful gathering: They bolted. And as would be expected from any good anthropologist, Geertz and his wife acted on the “established anthropological principle, When in Rome…”

The chase that followed had the energy of a coming-of-age high school comedy. Adrenaline-fueled bodies flew “head-first” over walls and behind wicker screens. The village leader headed for the river, where he undressed so that he could claim to have been bathing and deny any knowledge of the affair. 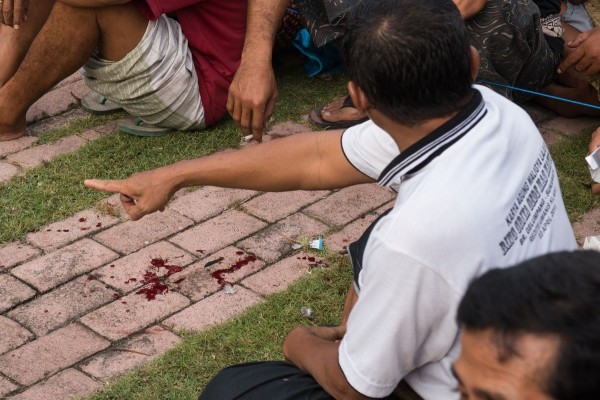 Spilled blood is considered a sacrifice that will bring good crops.

The Geertz couple followed a man into his family’s compound where his wife, clearly knowing the routine, appeared with tea. The new friends instantly composed themselves and began the act of having been there all afternoon discussing…things.

Not only did the cover work for Geertz and most of the village, but the story of the two outsiders acting in solidarity with their Balinese hosts and taking part in the adrenaline-filled dash opened the doors to the community. Geertz and his wife were suddenly insiders, part of the group, warmly teased and welcomed. 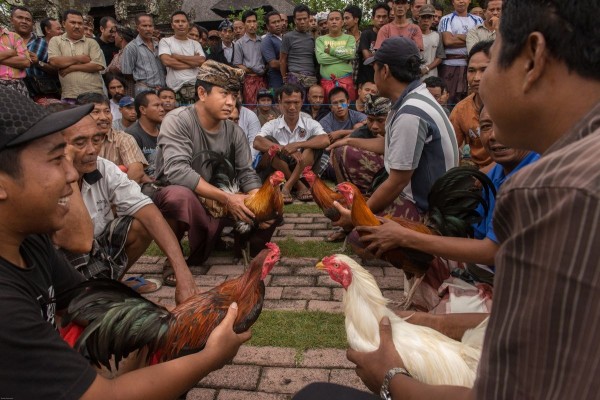 The importance of this type of community acceptance is a place where anthropology, journalism, and living as an expat all overlap. If there is an expectation to see a community or truly be part of it on any level beyond its most surface elements, one cannot remain an outsider.

It took more than three weeks of photographing cockfights around Bali for me to approach a level of community acceptance. I had gone from a stranger with a camera to a familiar face. The price of my ticket, like everyone who attended, helped maintain community temples around the island. Gamblers who spoke next to no English knew my name, and we laughed together over meals of babi guling. There was even an invitation to one of the high-roller’s homes for a blessing and introduction to his third wife. 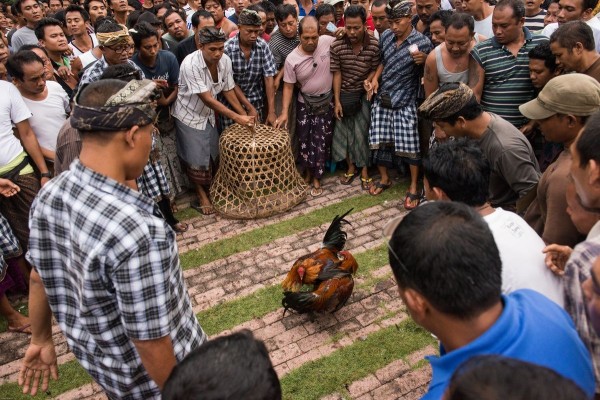 Balinese men look on as two birds begin a fight to the death near Ubud, Indonesia. It is a requirement for each temple on the island to host a cockfight every year.

As time progressed and more doors to the community opened, I developed an almost paradoxical discomfort with my comfort at the fights. I was happy to be part of the social environment and enjoyed the experience. But after, when I returned to my old community, I had to consider the more brutal aspect of what I felt welcomed into.

It was a gruesome sight to see an arena of 3,000 men who gambled small mountains of cash on animals that had no choice but to kick their competitors to death. 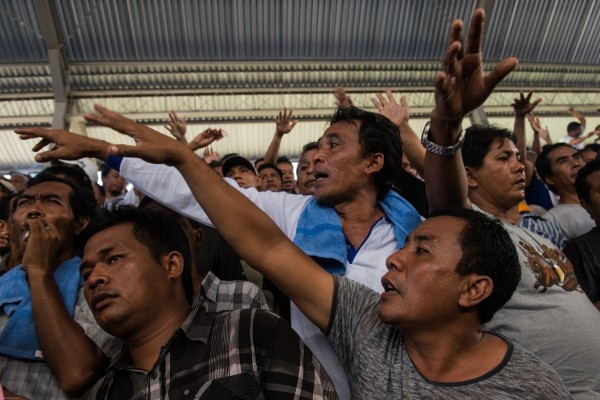 Gamblers call out their wagers, seeking partners to accept bets. In the past, cockfights were illegal in Bali, but because of their cultural importance the ban was ignored. The compromise between Balinese authorities and the central government was to allow the fights but ban gambling, as it is frowned upon by the Islamic values that are prevalent in the central government.

In a pursuit to justify my enjoyment, I ended up in a conversation with a man who was taking tickets. He didn’t dodge the ugly morality, but explained and accepted it in the context of a Hindu worldview that my community of origin may have had a harder time understanding.

He explained to me that Hindus do not believe in duality. Any action, no matter how vile at its first motion, must also be defined by its equal and opposite reaction. There is no denying the evil inside all of us. And if we are going to embrace it, as an honest person must, we should at least make something useful of it. 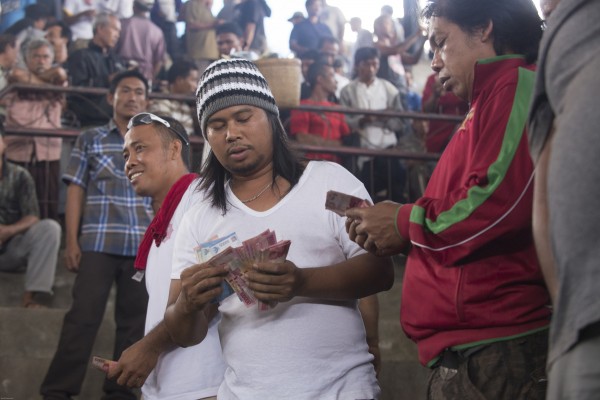 The thought of “making something useful of it” stayed with me until the next event. I looked around and saw the amount of money that went back into temples from ticket sales. I saw people who sold clothing and food at the fights that otherwise may have had no market. There was also chicken meat handed to men who had lost their bets.

What has changed between the time of Geertz’s acceptance and my warm welcome is that Bali is no longer an abstract far-off island. It is a destination, part of the international consciousness, and home to scores of expats. The new reality is that the interlopers are here to stay and their community has a role in not just being accepted, but also accepting the culture they have moved into. 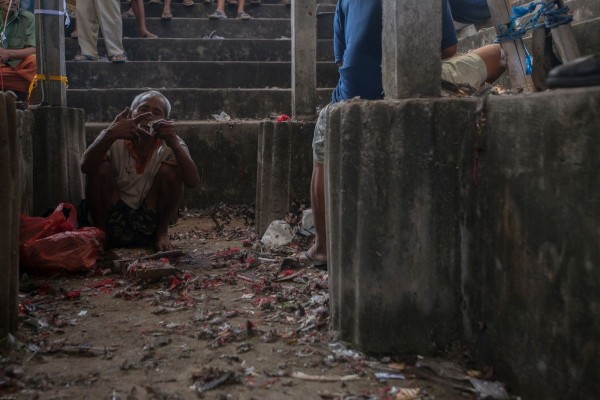 While all of us who have visited and lived on the island have in varying degrees been cautiously accepted by the Balinese, some of the culture remains hidden behind the initial distrust Geertz was exposed to. The question that now is posed to all of us interlopers is, will we act in solidarity with our Balinese hosts, take part in the community we have entered, acknowledging the bit of evil inside us and join in the adrenaline-fueled, head-first dive over the walls between us? 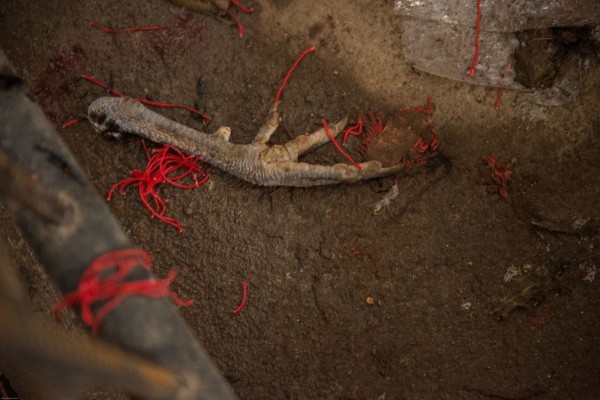 The discarded foot of a bird that just lost a fight. The meat is often given back to the losers of the fight as a way to hedge their loss.

As foreign communities become an increasingly prominent part of Bali, the question begs to be asked if the outsiders will truly accept the culture. 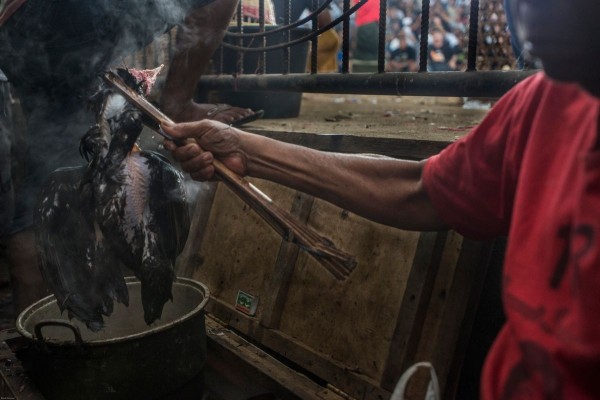 As soon at the match ends, the birds are plucked and prepared to cook at a later time.

By the standards of the community I was born into, there is no justifying a cockfight. But in the context of a community that supported its members and the evil inside all of us, I made my uneasy peace.

What did you think of this article?
Meh
Good
Awesome
Bookmark
Posted In
Culture Guides Narrative
Destinations
Bali, Indonesia

The Edge: How to experience an epic Balinese resort

18 signs you were born and raised in Bali

Every seven years, this man takes a year off to travel. Here’s how it made him more successful.

9 best cafes in Ubud (Bali) for wifi and working

5 ways Bali can be even cheaper than you think

A volcanic eruption in Bali has trapped thousands on the island

Round-trip flights to Bali are under $600 right now — seriously.