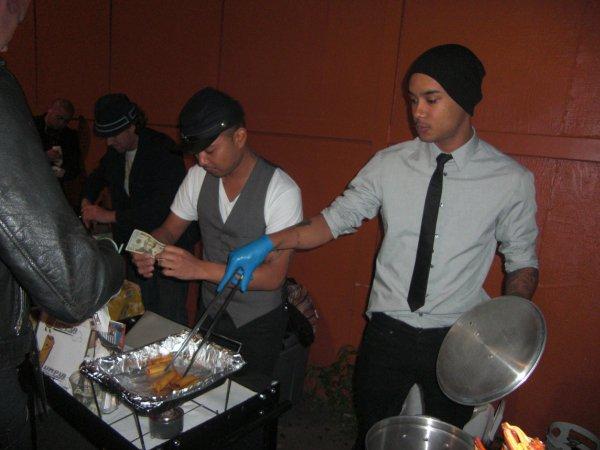 Juliane Huang will eat whatever people hand her on the street.

“YOU KNOW WE’RE going to smell like the shameful side of a deep fryer,” I say to my roommate as he consolidates our empty food plates into neat stacks.

We’re in the Castro tonight for Dirty Dishes, a semimonthly event that fuses music, drinks, and a rotating cast of some of San Francisco’s most popular street food vendors into one steamy night of immediate gratification. Lumpia Cart is serving up a storm beside us; there’s no way we’ll get out of here without smelling like food. 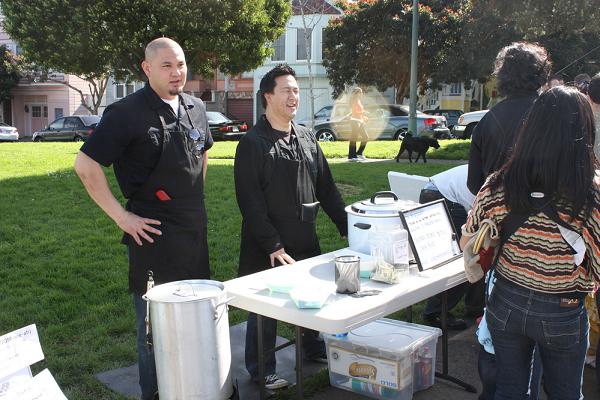 The growing street food trend in San Francisco began sometime in the rainy spring months of 2009 and has emerged on the other side of this year infused with a veritable personality of its own.

More intimate than the food trucks swarming the parking lots of Los Angeles and friendlier than the steel carts lining the concrete in New York, the street food carts here build friendships with their customers, support each other’s businesses, and organize collective social and charity events.

At 27, Abe Espiritu, of Lumpia Cart, is the youngest of the cart men. Having gotten into the food cart business last August, the second generation Filipino entrepreneur didn’t initially realize how many people had no idea what lumpia was.

“I just thought, hey, let’s sell some lumpia to some late night club goers,” Espiritu says of his initial idea for the business coming from watching the bacon-wrapped hot dog vendors camped outside clubs and bars late at night. “When I first started, a lot of people came up to me and were like, ‘what’s this stuff?’ I’d tell them, ‘look, just try it, it’s like an egg roll.’ They would, and they would love it.”

Of course, what’s not to love about fried finger foods?

That many people are unaware of lumpias ultimately contributed to Espiritu’s socio-ethnic ambitions, as his ideas about the future of his lumpia cart business now plume into ubiquity, making the crunchy egg rolls a regular food option for American consumption rather than remaining a foray into “foreign and ethnic” cuisine. 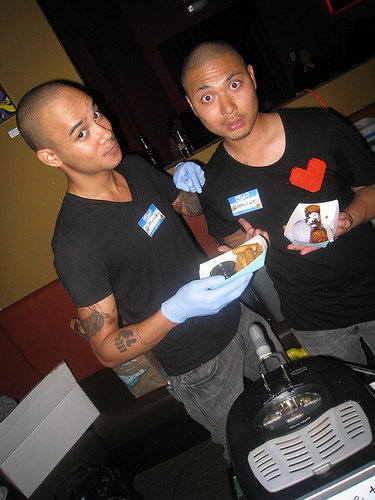 Espiritu (R) with his lumpia cart partner at work.

To be fair, the first time I ate a lumpia was from Lumpia Cart, and I was with my roommate whose mother is Filipino.

“What do you think of the lumpia?” I had asked my roommate, meaning whether or not he thought we should buy them.

It’s only after he answered this way that I started to think about the motivations for my question. Sharing the same space that night with Lumpia Cart was Creme Brulee Cart, Curtis Kimball, and his brother Magic Curry Cart, Brian Kimball. Going in, I had quickly made the assumption that night that all carts were sharing their foods to show off their superior cooking skills.

And I, as someone with taste buds too big for their britches, was there to decide whether or not I agreed with their culinary assertions. It didn’t occur to me that maybe the challenge was never issued, that the cart men could possibly have other reasons for starting their businesses. 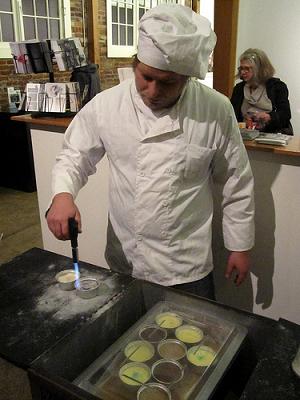 “I don’t have professional culinary training [and] I’m not trying to go all gourmet,” Espiritu, who uses his first-generation Filipino mother’s recipe to make his lumpia, says. “I’m just making good food for good people.”

This warm and fuzzy sentiment of community has been expressed before by other food cart vendors when asked what keeps them hustling in the game, especially a game that takes more hard work than provides cold, hard cash.

Through starting a food cart business, Espiritu has expanded his social circle exponentially. Journalists fly from New York and Vancouver to try his food and record his original sound-bites. Customers all over the bay area follow his twitter to track his transient locations. Other carts, such as Adobo Hobo and Soul Cocina, engage him in email chains coordinating cross-promotion.

I think about this as I reach for the peach-spearmint hookah at our table. We’ve been sitting at Morac lounge in the Mission District for two hours now, smoking from a hookah, discussing Filipino foods, and drinking very fresh and very SF cucumber cocktails.

Life should always be this fun. And, tasty.

Street food has long been a common and popular way to eat out in other parts of the world. Check out MatadorTV’s videos on the Indian street food and Vietnamese street food scenes.