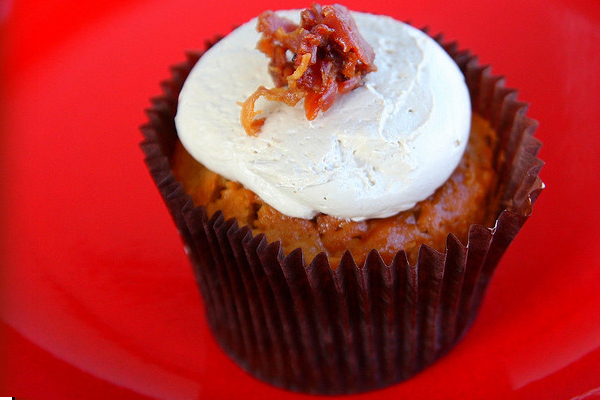 Bacon, brown sugar, and maple cupcake from More Cupcakes, Chicago: JOE MARINARO; Feature photo: Diners enjoy themselves at Borinquen under a portrait of a jibarito: supafly

Chicagoans are passionate about food. Most visitors would be familiar with Chicago‘s deep dish pizzas and condiment-rich beef hot dogs, but there are far more specialties unique to this food-loving city.
Savory cupcakes, More Cupcakes

If red velvet, chocolate, and salted caramel are too vanilla for your taste, this cupcake shop has got some flavors you won’t find at Magnolia or Sprinkles.

True to its name, this bakery takes its creations to the next level, using both sweet and savory ingredients in its cakes and frosting. Finally, you can actually subsist on cupcakes for lunch or dinner with flavors like BLT (frosted with ranch dressing), brie champagne, strawberry feta, and even foie gras.

The Pilsen neighborhood may be home to Chicago’s Mexican community, 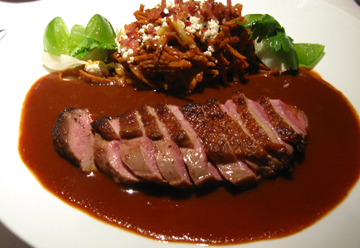 but the restaurant of choice for many Mexican food enthusiasts is Frontera Grill.

Chef Rick Bayless’ cookbooks and TV show, Mexico: One Plate at a Time, put a contemporary spin on traditional Mexican recipes, some dating back to the Pre-Columbian era make Frontera even more of a draw for Chicago diners.

The menu changes monthly, so unless you come often it’s not likely you’ll have the same meal twice. If you just can’t get enough, Bayless has opened other restaurants around the city, including next-door neighbor Topolobampo.

Sushi Made With Love, Ai

At most sushi joints, value seems to be more important than quality, as if super-sizing the rolls so that they require a knife and fork will make up for inferior ingredients. 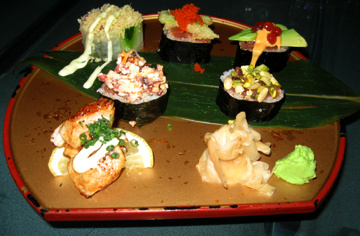 Not so at Ai. Though pricey, the chefs here put some major ai (Japanese for love) into their craft. While the menu includes the standard spicy tuna and caterpiller rolls, the signature items include the habanero lobster roll and nigiri with cherrywood smoked duck.

Pearl drinks, also known as boba, arrived in the United States from Taiwan years ago, and franchises selling the concoctions of milk-tea or juice with chewy, black tapioca balls now dot Asian enclaves from Los Angeles to New York.

While many of these shops rely on artificially-flavored syrups or powdered drink mixes to produce their “apple” or “papaya” tapioca drinks, Joy Yee, a local chain of pan-Asian restaurants, also sells a large selection of boba smoothies made from fresh fruit. It’s refreshing to see actual fruit segments going into the blender, rather than some pastel-colored substance with barely a hint of any fruit flavor.

It’s perfect on a hot and humid summer day.

In my book, it’s hard to go wrong with any food item involving chai. 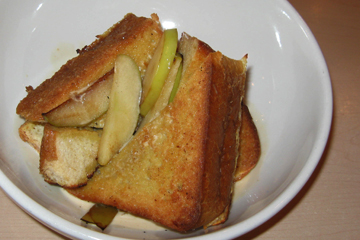 When you combine it with a brunch favorite, the end result is bound to be marvelous.

Orange’s chai French toast is infused with chai tea, stuffed with ricotta cheese, and served in a chai tea latte reduction topped with slices of caramelized apples. Certainly one of the most filling breakfasts you’ll ever eat.

The Jibarito, invented at Borinquen in the 1990s, sounds almost as gastronomically incorrect as the KFC Double Down. 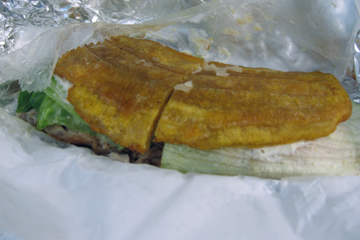 Inspired by a sandwich from Puerto Rico, it consists of a choice of meat, cheese, lettuce, tomato, and mayo between two slices of fried plantains. Once you get past the greasiness, it’s as comforting as a burger.

It’s become such a big hit that Latin American restaurants all over Chicago, and in other Midwest cities, have since copied Borinquen’s creation. But for the original, head to Humboldt Park. 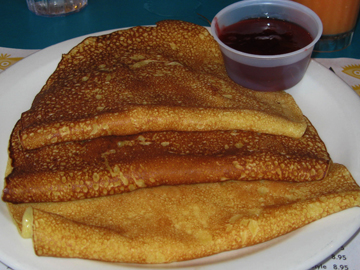 They’re just like crepes, but at this Chicago breakfast favorite they come with lingonberry sauce (a Scandinavian staple), the restaurant’s meatballs, or a side of eggs. Also of note here are the legendary cinnamon rolls, slathered with cream cheese icing. To prevent carb-overload, pick one up to go.

It’s not likely that you’ll be able to join President Obama for breakfast at the White House, but you can enjoy what he once had for his morning meals at one of his former Chicago haunts.

Valois is an institution in the Hyde Park neighborhood, a microcosm of the diverse, integrated neighborhood in an otherwise segregated city. Regulars come for breakfast, which is served all day, as well as its all-American comfort meals.

A menu of Obama’s favorites, including steak and eggs with hash browns or toast, is posted by the counter.

Find out where to BYOB or volunteer in the windy city on Matador’s Chicago Focus page.

Or for quick reference, find out what not to do in Chicago.

The TSA has a new rule for snacks in carry-ons. Here’s why. 7 classic French dishes you need to try to understand the cuisine How ‘Doughnut Lassies’ supported front-line troops during World War I 12 types of Japanese green tea all true tea lovers should know 8 sweet, fruity, and savory Brazilian desserts you need in your life

Only 1 in 4 restaurants will reopen, according to new industry study