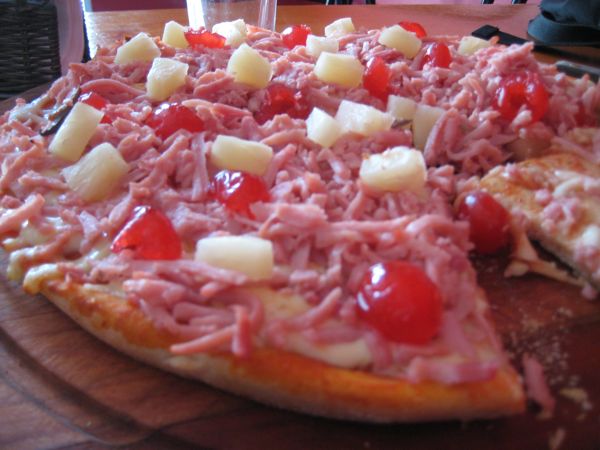 This creator of this restaurant should be thrown in jail. You’re looking at a picture of what should be called The Hawaiian Bastard.

It arrived half-cooked. I had to dig through a thicket of shredded ham, pineapple and –yes – cherries before finding a bite that seemed reasonable.

Imagine if candy was made out of ham. No, don’t imagine it as delicious. Imagine it as foul! That’s what this pizza tasted like. With additional pieces of uncooked, shredded, part-skim mozzarella.

Oh, and let’s discuss the concept of cherries on pizza: No. End of discussion. 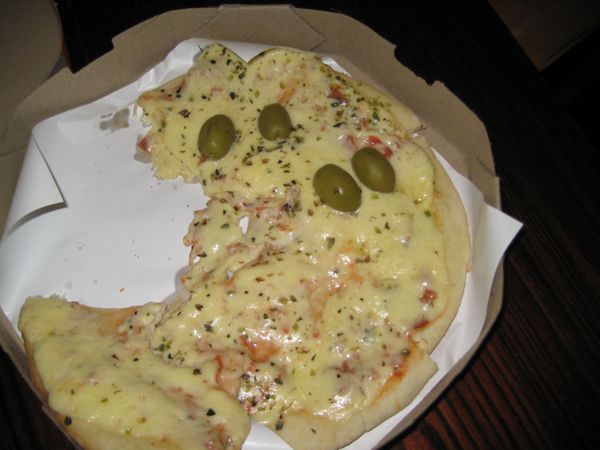 Even the pizza sweats in Argentina.

For the most part, don’t even bother with pizza in Buenos Aires. It’s about the most disgusting thing ever cooked in a country full of things that are perfectly cooked. Get thee to a meatery and skip this nonsense.

Don’t believe me? Witness big goops of cheese that taste like year-old butter. Add Oregano to cover the sweating fromage, which overpowers any hope for a cohesive taste. Toss on green olives the size of human testicles, just to make the whole thing seem even less palatable than…testicles.

If you must eat a pizza in Buenos Aires, I highly recommend that you eat out. Anything delivered will arrive on one side of the box, looking more like a swollen eye than a pizza pie. 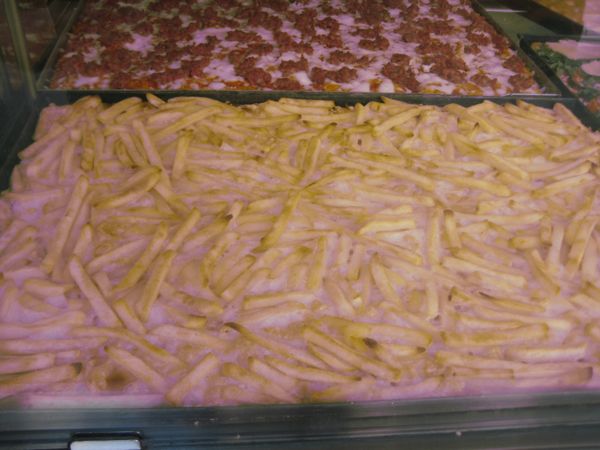 Yes, the Italians can make a bad pizza.

It’s one of those In Theory pizzas, kind of like the crazy-combo pies that chains launch and pull before the coupon hits your mailbox. Yes, this is a French Fry Pizza.

What it amounts to is a pile of potatoes cooked in greasy cheese and pizza dough. It doesn’t work – not in the least. I watched another tourist give it a go and she couldn’t figure it out either. She squiggled a little ketcup onto her piece, took a bite, then threw it in the garbage. I assume that she pointed her hunger towards McDonalds shortly thereafter.

Please, put this miserable, suffering beast of a pizza down. 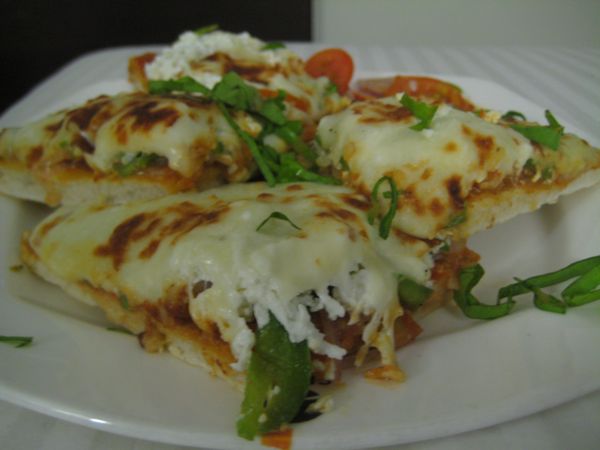 Evil has a name. It’s whatever this pizza is called.

A foul, atrocious pizza awaits anyone staying at The Suba Galaxy.

I implore you. DO NOT EVER put onions inside of a pizza, especially ripe and uncooked offenders. I’d also like to suggest that feta doesn’t work in this context and that mystery greens are not generally acceptable in any form.

This pizza was devious, deceptive and evil.

Turn left at the tree. Head west until you hit Italy.

You’re thinking that it doesn’t look too bad, this one. This is only because you’ve seen the above pizza pictures. It’s relative, sir/mam. Look at it again. It’s awful!

The first thing that most Thai pizza-makers do is start with a pre-made base, kind of like you’d find in aisle six of Stop & Shop. Many times, they’ll take just about any kind of jarred tomato sauce (I’ve seen Ragu) and add it to cheese that tastes a bit of dirty socks and coriander. The pizza pictured is a fine example.

Yes – It serves us Falang tourists right for ordering pizza in Thailand. Yes – we should know better and just order the Pad Thai like every other backpacker. But no, we can’t resist the promise of a real pizza.

It’s the ladyboy of the food world – we know it’s not real but by-gosh, we’re going in anyway.

We want to hear your pizza nightmares! Feel free to comment below and PLEASE link to a picture, if you have one.