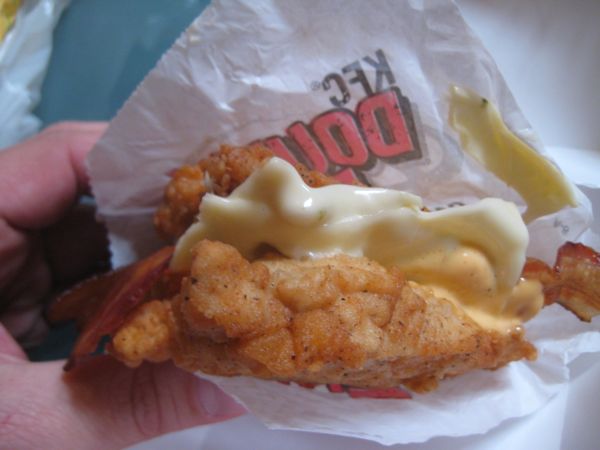 There’s probably nothing like Kentucky Fried Chicken’s new Double Down, a bun-less concoction that promises 35 grams of fat and 1,380 mg of sodium. But without bread, for those of your watching your figure.

A friend had posted a picture on his Facebook and I became intrigued. What could this bizarre concoction be? Had a fast food chain broken new ground? Had they invented…a new MEAT?

It turned out to be a photo of KFC’s Double Down, a ‘sandwich’ which slaps two white meat chicken filets together with a filling of bacon, monterey jack cheese and Colonel’s Sauce (a white goo that tastes hollandaise-y but looks like whatever came out of the head of Ash from the movie Alien). One google later and I found out that it was the center of a country-wide debate.

And probably front page news at Chickens For The Ethical Treatment of Chicken’s newsletter, too.

Never one to shy away from a large meal, I zipped right over to KFC and ordered one. Stunt food or not, I was going to try it. 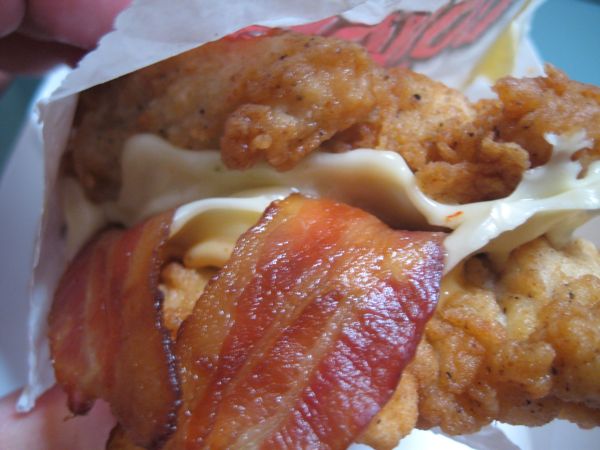 Ready for your close up?

Unwrapped, it’s an embarrassing thing to marvel at, as strange as being caught eyeing a new prosthetic leg or choosing between two marital aids. The bacon lipped out of the sandwich, as if it had already been positioned for a photo shoot. The goo oozed perfectly and the cheese looked like it’d been tarted up for a TV commercial, half-melted but not runny. I was thankful for the wrapper that held the whole thing together, lest something grime up my fingers real bad-like.

If KFC’s goal was to create a Frankenstein sandwich, something foreign and bizarre, then they succeeded. This was not anything like a burger, or even some of the crazy churascos I’d seen.

One bite in and I knew that I wasn’t going the distance. An overpowering salty taste hit the system first, followed by a bit of spicy sauce that felt like it was poured straight from a gallon jug that’d been purchased at the dollar store. The two fillets were indeed juicy, but the double-juicy factor made it feel just plain strange without some kind of bread. Imagine eating a warm popsicle. It made no sense. 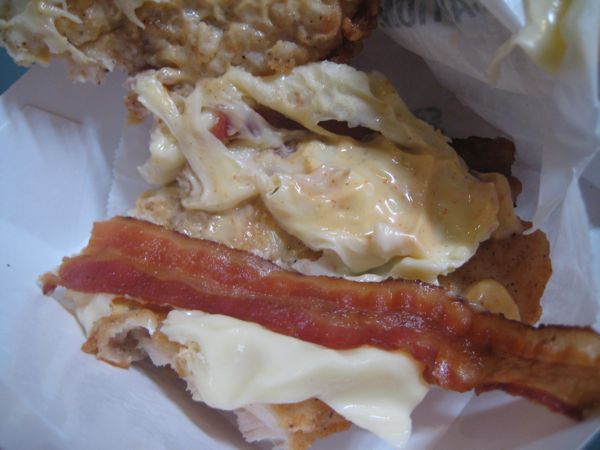 The whole affair was a bit too boingy. I wondered if it might not be a late night kind of item, one that you love at the minute but regret a dizzy mile later. It wasn’t bad. It just wasn’t good and certainly didn’t feel good for me. It made me wonder if British food wasn’t that terrible, after all.

I was left hoping that this new trend of creating something outrageous just for the sake of it would not have legs, that this was something a hungry world wouldn’t substantiate. That people with thinking minds could ignore and blast past. Then I ate the strip of bacon that was left laying there.

We are a weak people, really.