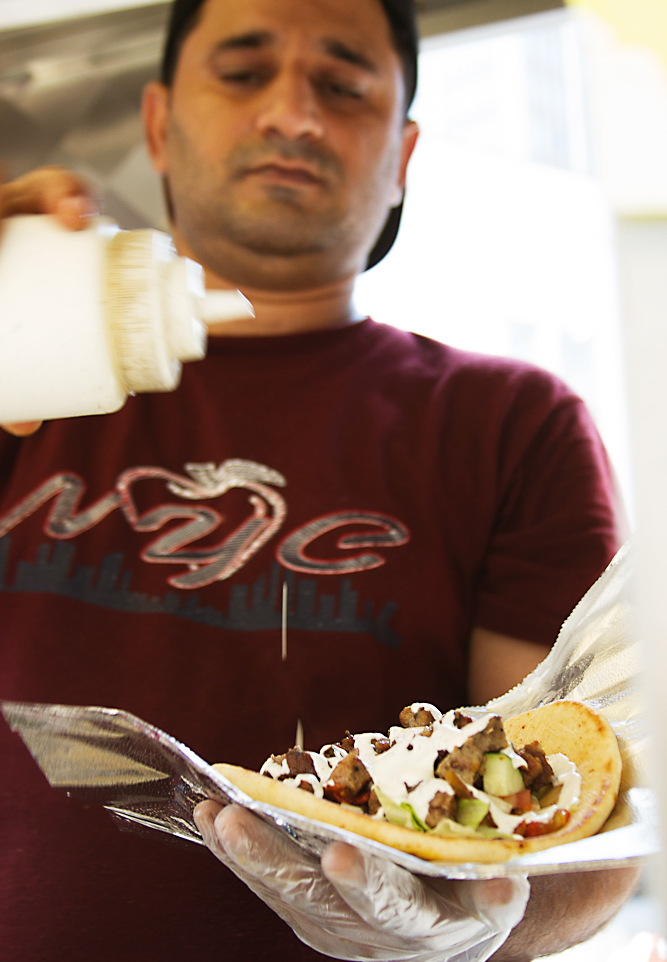 I’m eating a ketchup-drenched tube of pressed meat-parts at an organic farmers market. Gnawing doughy pretzels beside the Jewish bagel shop. Lapping generic-brand ice cream outside a restaurant devoted entirely to custom milkshakes. And it occurs to me this street food adventure in New York might not be the best idea.

At JFK international, they charge you $50 just to get off the airplane. Bartenders stir drinks with shriveled credit cards. And taxi cabs all include their own debit machines. A hot dog, however, costs 99 cents. It tastes like condiments, isn’t quite hot, and a bit too doggy. You can survive on them. For a while. But why would you?

In a city with so many delis, pizza shacks, breakfast nooks, and Italian eateries, no one should waste their time eating regrettable street food aside from people who’ve been here long enough that they can afford nothing else. Plus are drunk.

The carts appear to be made in Thailand. They’re barely mobile. And they’re operated like fast food franchises, employing desperate immigrants to work slave labor hours. How do I praise this system? New York street food history dates back to 1890s cattle runs, but the inevitable capitalistic homogenization has won out.

And don’t even talk to me about pizza. New York Pizza is everywhere. You can smell it, leaning out into the sidewalk but not quite a street food. So…I can’t eat it?

At Frankie’s Restaurant in Brooklyn, I order two bloody marys and a meatball sandwich because I already ate too much pizza today. I’ve forgotten all about street food. Street food is amateur hour in New York. If you really deserve a cupcake, you don’t deserve to stand on the sidewalk eating it. Sausage should not be served amidst traffic. And donuts? Even cops prefer the private warmth of a coffeeshop for that.

I tell my waitress my problems. NYC waitresses listen. Street food guys are all talking on their cell phones in another language while you try to order. Like cabbies gone insane in their hot, greasy cages. But your waitress will listen, even if she’s really just thinking about her own problems.

“The best street food in the world is in Oregon,” my waitress says. She might be a junkie. Or a model. New York can be hard.

I order another bloody mary. When she returns, she says. “Maybe you should try the roach coaches around Central Park. I hear there’s a whole scene for that. Gourmet shit.”

She brings my bill. My lunch cost one thousand dollars. 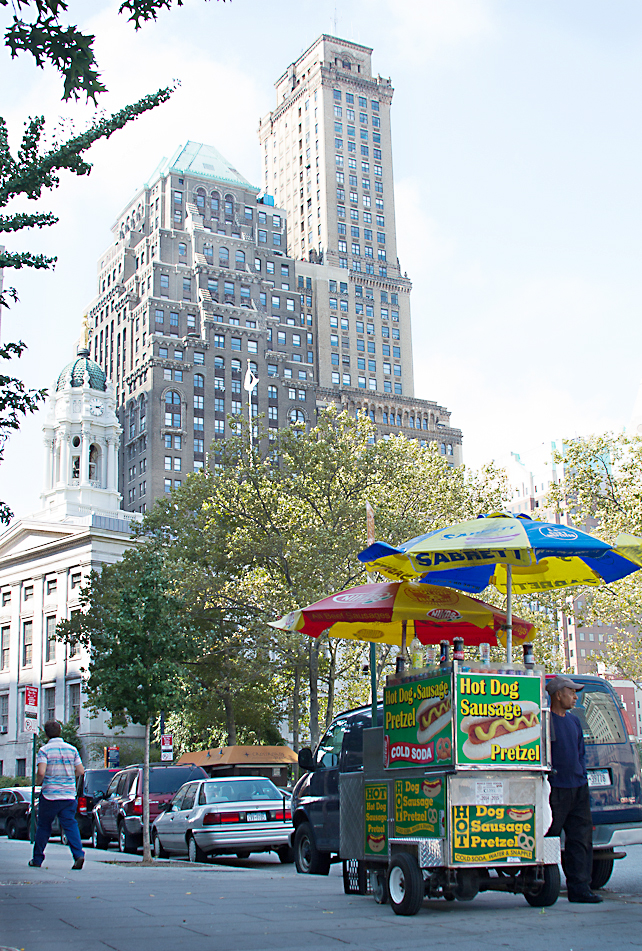 This is the type of thing Google was invented for, and later, long after I have left New York, I will learn about NewYorkStreetFood.com and the emerging movement of gourmet roach coaches, of lobster rolls, Korean tacos, and custom grilled cheese carts that can be tracked and located online like some virtual treasure hunt. Genius stuff. The Holy Chipotle Durger. The Tribeca Taco Truck. Schnitzel & Things. Finding these would have been awesome work by me. But instead, I explore the strange kindness of strangers in New York.

Strangers in New York are strange. They all act like they have no time or tolerance for my ignorance, and then they spend inordinate amounts of time and energy dallying over my problem with no hope of solution. A powerwalking businesswoman looks at her watch before looking at me, then spends five minutes investigating my street food notes before announcing she is a vegetarian. A bum threatens to throw a rock at me, then says he could make street food for me here and now. (I pass.) A pregnant single mom nearly loses her 2-year-old looking for a map in her purse. Or maybe it’s a taser. She finds neither, but stops the kid short of falling into the pond. Or maybe the ducks did that.

No one knows what I’m talking about. But nobody murders me either.

Under a tilting skyline and not so far from the Statue of Liberty, I finally locate a roach coach. By accident. At 2am. It’s awesome.

This city is so much so much so much at every moment. A desert of activity. Nightclubs, bars, hotspots, food, where to next — the question never doesn’t answer itself. No dawn too daunting. I don’t even remember why I came here. I’ve lost my way. Lost my friends. None of it matters. And that’s when I find tacos. 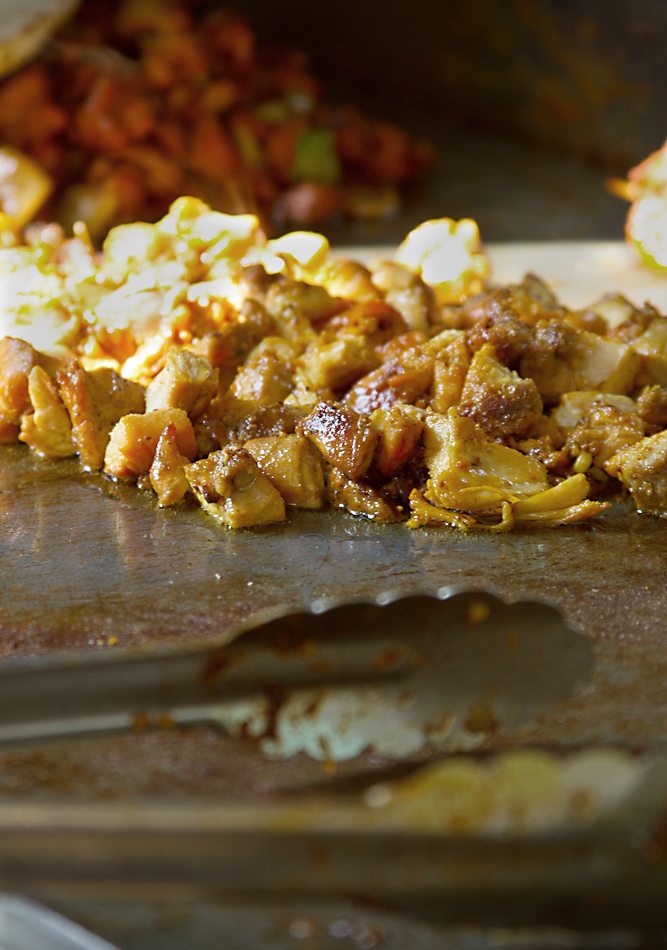 No, not tacos. Something else. I say, “Hola, amigo,” and he says, “I’m Dominican, asshole.” We’re both laughing, though he seems less drunk than I. His menu is deliciously absurd, even for this hour: pigs ears, pigs feet, and pig snout. Fried plantains and fried cassava. Fried beef. Yes, that’s what I’m having. Fried. Beef. Words born to stand side-by-side on a New York sidewalk at 2am.

“That one,” I say, pointing across his swampy grill.

A siren beeps. Piercing the conflicted din of endless all-night city-ness. There in the bustling night, it could be for anything. Anyone. I’m holding a beer. The guy across the street just robbed a liquor store. That coked-up day-trader caused the global financial crises. But the officer steps out of his car and walks right up to the Dominican pig-food truck.

And shuts his ass down. Health Department violations. Serving cold fried items. Lack of lighting. Lack of permits. General dirtiness. And failure to be a hot-dog franchise.

He writes a ticket. The roach coach drives away. I go home with no fried beef. I leave New York with a confused understanding of street food and heartburn of an unexpected variety.