Her entire restaurant, it’s the size of her hat. She’s wearing it down the beach in Patong, just two baskets cantilevered across her frail shoulders. Eggs and dried squid. Hot coals and a steel basin of charcoal. So simple and functional. This old woman with the delicious meal that can stroll right up and shake your hand. 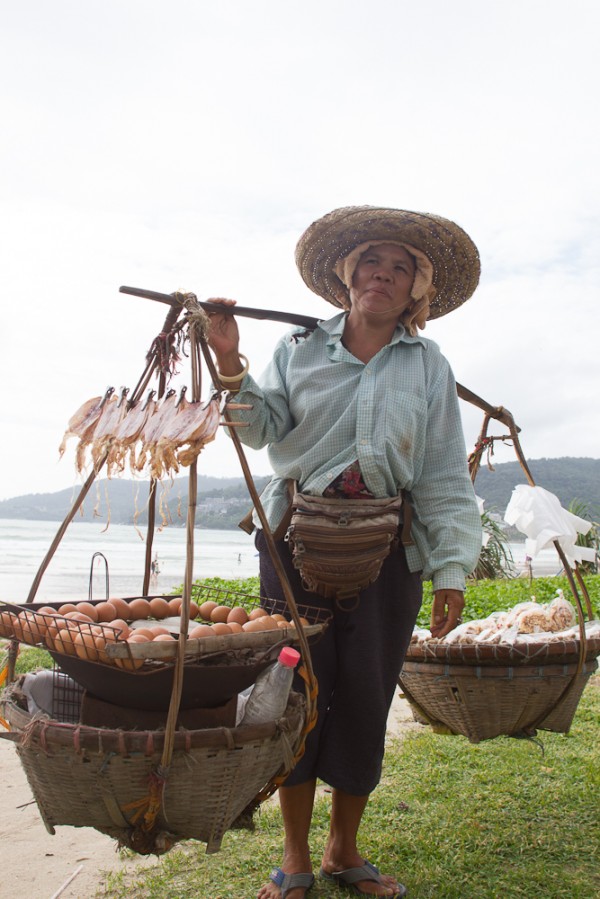 The rest of the beach has gone insane. Waverunners crisscrossing with paragliders and kiteboarders in the closeout surfline. Snorkelers and funboarders playing blind roulette. Russian sunbathers and local soccer games harassed by wild dogs. Sidecar motorbikes racing along the tideline. Patong is where Thais come to cut loose. No one seems to notice the old woman, stopping silently at each sunbather to ask if they want, um, whatever it is she’s making. Eggs-n-squid, or something.

I ask what she is making. She doesn’t understand me. Instead, she kneels in the sand and begins to prepare a porcelain bowl for me. Noodles sizzle on a greasy pan. Eggs crackles. Squid and peanuts follow, dissolving and blending into the mix with some ambiguous greens and potent chili powder. Against my will, my mouth is watering. All this over a woven basket in the sand. The sun is going down. And I am hungry.

My last memory of Thailand is a 3am Bangkok blur from some five or eight years ago. Dancing in the street in front of a pink VW serving cocktails on the sidewalk. The moon was a disco ball that night. An old man made us pad thai from a wooden cart he was rolling down the alley. Best thing I’ve ever eaten, swear to god.

I’ve been craving that pad thai ever since. Greasy, hot, and served on the curb. Street food dissolves boundaries between local and tourist, between safe and unsafe.

Traveling alone on a three-stage journey — Thailand, New York, and Bali — I formulate a plan to eat only from street carts for the entire trip. I land in Phuket and gorge myself on memory-lane pad thai on for three straight meals. Then I start exploring.

Everyone except the cart food venders. The banana pancake man seems barely interested in serving me. The meat-on-a-stick cooker patiently lets my chicken skin and cow liver skewers glaze to perfection. The gelato guy lets me taste as many flavors as I want. Such dignity. Such reserve.

They push their carts down the same streets every night. Many of them have simple contraptions welded to their motorbike. Against the traffic and through the night. No haggling. No hollering. Their prices are fair. Their kitchens hold no secrets.

The go-go girls eat boiled oysters on the sidewalk. They offer me some, then giggle as I burn my fingers and spill my cocktail. It’s 3am. Things are just warming up in Patong and I’m getting stuffed. And scared. As if all this street food were just fuel for a long series of perverted crimes. This town is wild. And highly creepy. I want to leave, but not till I’m done eating.

I’m standing between two three-story super-clubs while the power lines dangling between them like a nest of snakes buzz and crackle in the tropical mist. A power converter catches fire and everyone pauses from their inebriations to stare at the flame like dopey moths. My go-go friends don’t seem alarmed by this, so I assume it’s business as usual. 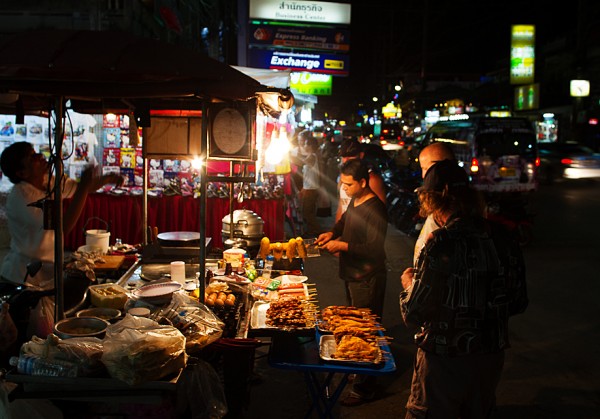 I order more oysters. The vendor man laughs at my mime. The go-go girls make goo-goo eyes. Fireworks explode above us and the power goes out for the entire block. Total darkness. I hear my oysters sizzling. Hookers giggling. In the dim kerosene light I see their Adam’s apples dancing up and down. If this town were full of vampires, now would be a perfect moment to drain us all.

The kabob-cycle is a thing of beauty. Like some sort of fast food rescue vehicle, sleek, greasy, and functional. Shwarma on wheels. It’s nearly dawn and my belly glugs with random booze. He pulls up to the curb beside me. Angel with a steak knife. The motorbike is equipped with a large, rotating skewer of chicken. He heats the pita against a wire-mesh toaster and slices hot meat down onto the plate. Lettuce. Tomato. Mayonnaise and hot sauce. On the boozy side of 5am, this is basically health food.

It costs a dollar. Wrapped in tinfoil and plastic for ideal stumbling consumption. My shwarma angel putters off into the dim dawn for further zombie hunting.

I trickle down to the sand. Moonlight and low tide. The old squid woman from earlier in the night, she’s sleeping in a beach chair with no one else around. A thin blanket covers her baskets. I squat nearby, gnaw my kabob, watching the stars clock out.

I should keep moving.

Tagged
Travel Phuket, Thailand Ambassadors
What did you think of this story?
Meh
Good
Awesome