MAYBE YOU PICKED UP SPANISH in another part of the world, where pronunciation, slang, and tradition are completely different. Or maybe you’re coming to the language for the first time in anticipation of an epic trip through Mexico. Either way, here’s a quick and dirty introduction to 14 words and phrases you should definitely get familiar with before checking out all the awesomeness Mexico has to offer.

“Don’t say ‘what’, say ‘mande’” is one of those classic things Mexican moms tell their kids. Even if we’ve never really understood what’s wrong with asking “what” (qué in Spanish), this recurring instruction has stuck with us, and we commonly use mande as a more polite version of the aforementioned word.

So remember, when you think your waiter is asking what type of wine you want with your contemporary Mexican dinner, but you didn’t quite catch what he said, don’t say “what,” say mande.

This is the first word you’ll hear whenever you make a phone call to anyone in Mexico. It isn’t really a salutation, more just a random word (bueno literally means “good”) we use at the beginning of every call. Only the person receiving the call will say it, and only once. If you answer back with another bueno, things will go all weird. Go ahead and try it!

So when you’re calling to book a bed in that cute little hostel in downtown San Miguel de Allende, and you hear a bueno from the receptionist…you’ll know exactly what to make of that.

A time-based expression that depends entirely on the context and the speaker, ahorita is supposed to express immediacy, but we tend to use it as a temporal wildcard that could be referring to any amount of time between the next few seconds and the next few…let’s say minutes.

It’s a good one to throw at your travel partner when he impatiently asks when you’ll be ready to go out and hit the bars in Mexico City…and you haven’t even taken a shower yet! 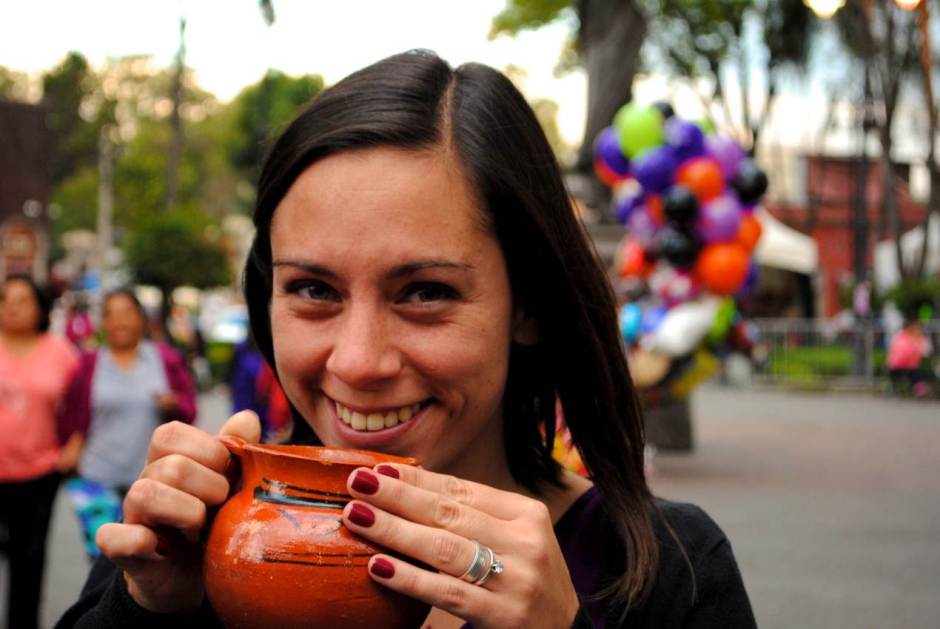 Our short, simple, and effective way to say “be careful.” We use it in situations where immediate action and quick reflexes are required, like when you’re about to step in dog poop, or when you cross the street thinking those cars are going to stop simply because you’re using a crosswalk.

Don’t get confused if your waiter says aguas when handing you a delicious, steaming hot café de olla on a chilly morning in the mountain city of Taxco. She hasn’t brought you the wrong beverage (aguas literally translates to “water”) — she’s just trying to save you from burning your tongue.

On top of the Pyramid of the Sun, Teotihuacán. Photo: Luna sin estrellas

This is a tricky one. It’s normally used to express agreement, but depending on the tone and context it can also mean “hurry up,” “that’s amazing,” “let’s go,” “I wasn’t expecting that,” “it’s alright,” “come on,” “please,” “sounds like a plan,” “watch it,” or “yes.” Practice makes perfect, but remember we also abbreviate this expression to ora, which is also an abbreviation of ahora (“now”), and that there’s always ándale…which is mostly the same, but a little different.

Ready to run up the steps of Teotihuacán’s Pyramid of the Sun? Órale!

If your Mexican buddies start calling you güey, that’s probably a good sign. It means they consider you a friend, and you can refer to them in the same way. This is another confusing term that most of the time can be interpreted as “dude,” but can also mean “some guy” (un güey), “your boyfriend” (tu güey), or “you’re really stupid” (estás bien güey). Be careful not to confuse estás bien güey with ¿estás bien, güey? (“are you alright, dude?”).

In Northern Mexico, güey is normally replaced with vato (“dude”), primo (“cousin”), or compa (for the sake of simplicity, let’s just say this one means “dude” again). So you won’t hear anyone call you güey when you’re kiteboarding in Baja.

A short version of con permiso (“excuse me”) that’s used exclusively to make your presence known to the people around you while you maneuver through tight spaces, comper is especially useful at festivals and markets where phrases like comper, ahí va el diablo (“excuse me, the devil’s coming through”) are ubiquitous.

El diablo in this context is not the Lord of Darkness, but the dolly used to transport goods in Mexican markets. And there are a lot of incredible markets in Mexico.

Some people translate this expression as “bon appetit,” but this doesn’t seem completely accurate. Provecho is a strange greeting we use to acknowledge people who are about to eat, are already eating, or have just finished their meal. It’s not uncommon to say provecho to complete strangers, especially to every complete stranger you make eye contact with on your way out of that restaurant in Oaxaca where you just ate the best mole poblano of your life.

Provechito is a cute way of saying provecho…you’ll soon realize we have an issue with diminutives. A cute issue, but still.

One of our favourite greeting phrases, qué onda (literally “what a wave”) is the exact equivalent of “What’s up?” The wave can easily be substituted by a fart (qué pedo), a fraud (qué transa), a mushroom (qué hongo), or a roll (qué rollo) without altering its meaning.

This is an easy one. All of these words express that something’s good. Simple as that. Chingón is the best of the three, but it denotes so much awesomeness that some people consider it extremely rude. Chido and chilo are the mild and socially acceptable versions, but still pretty awesome. Chido is used in Central Mexico, while chilo is mostly used in the northern states and is pronounced “shilo.”

Wherever you are in the country, there will be ample opportunity to pull out this expression. Palenque is a good place to start, if you’re looking for ideas.

Ziplining against the backdrop of Copper Canyon. Photo: Marc Cappelletti

Padre means “cool”…well, it also means “father,” but that doesn’t make a lot of sense, does it? If you wanna say something’s really cool, you can say está bien padre (“this is really father”) or está padrísimo (“this is super father”). Some other expressions used to say that something’s cool include está de pelos (“this is hairy”) and está con madre (“this is with mother”).

So when someone asks you to describe your trip to Barrancas del Cobre — the massive canyons in northwestern Mexico that are actually bigger than the Grand Canyon — you know exactly how to answer: Padrísimo!

Flipping out over the beaches at Playa del Carmen. Photo: pato garza

Literally meaning “camera” or “chamber,” this is a common term used to show agreement. More adventurous speakers can substitute it for camarón (“shrimp”). As in: “We should hit the beach at Playa del Carmen after we check out the Maya ruins in Tulum.” “Camarón!”

Tacos al pastor, sure to bring on “the evil of pork.” Photo: William Neuheisel

“The evil of pork” is the common state of drowsiness that overtakes your body after a copious meal. The evilness resides in its ability to dominate a person’s will completely, forcing its victims to take a nap, or coyotito (“a little coyote”), despite previous plans. Chilaquiles, tamales, tacos al pastor…yes, the evil of pork strikes often in Mexico.

Hanging out in Aguascalientes. Photo: Hipnos

Looks like a simple “thank you,” doesn’t it? You’ll eventually notice we use this word in contexts that don’t sound logical at all, like when we’re refusing the offers of street vendors or dealing with those bank employees that insist on providing us with an extra credit card. We’re not really thankful for their efforts…we’re just saying, “No, I don’t want that.” Think about it as a “no, thank you” without the “no.”

Diagnosis: We tend to be extremely polite, and have issues with denials. Don’t you love us already?

This post is proudly produced in partnership with Visit Mexico.
Posted In
Languages
Destinations
Mexico
Series
Mexico: Live It to Believe It
Matador Network © 2006-2020
✖
travelstoke
Download the mobile app
stoked by