THE DARIEN GAP is a remote, roadless swath of jungle that straddles the border of Panama and Colombia, a part of the world rarely seen by outsiders.

When asked what my favorite experience is after two years of travel, I usually describe camping on an erupting volcano in Guatemala, or my journey into the Darien Gap. The Darien has an almost mythical quality to it — a dangerous land full of exotic plants, wildlife, and indigenous people that’s largely untouched by the modern world.

I spent five days inside the Darien, exploring its formidable wilderness, to discover if the myths were true. The photo essay below should give you a small glimpse into this fascinating and mysterious area of Latin America. 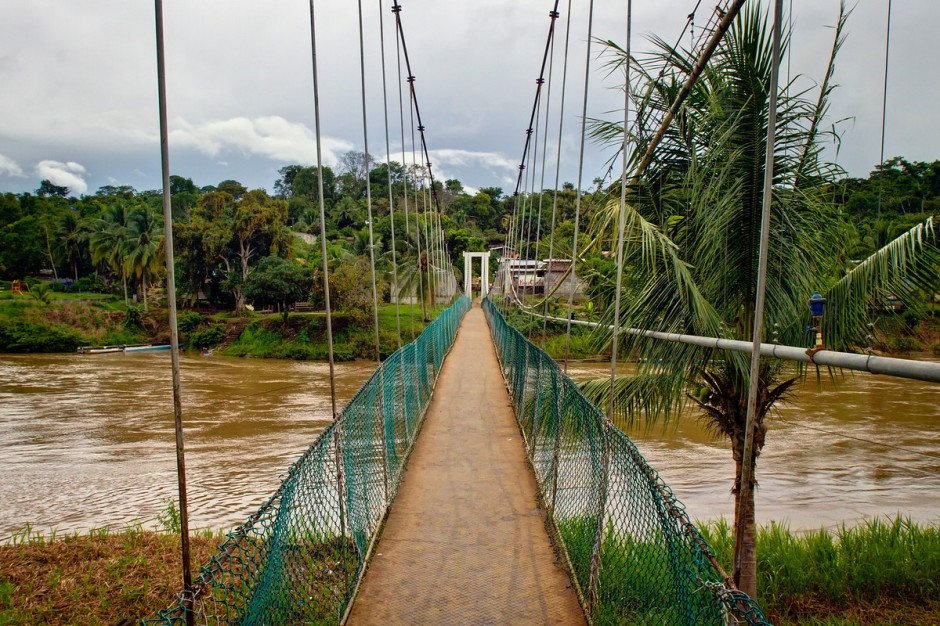 Entrance to the Darien Jungle

This simple footbridge in the town of Yaviza marks the only break in a 29,000-mile road network known as the Pan-American Highway, stretching from Alaska to Argentina. The 99-mile section of impassible jungle between Central and South America is called the Darien Gap. 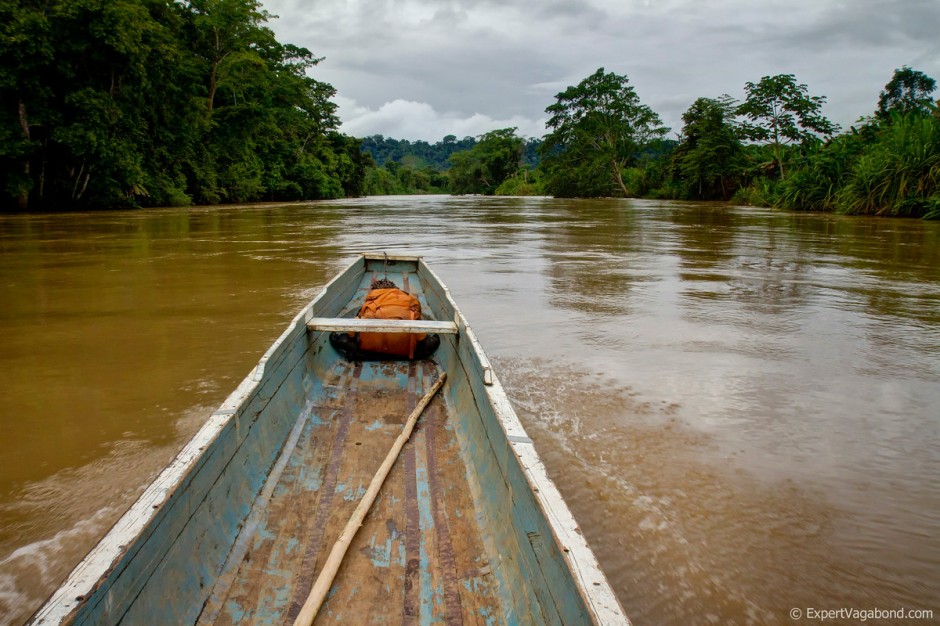 Most of the Darien rainforest is roadless, so long Piragua canoes like this are the primary mode of transportation. Locals with some money are able to afford an outboard motor, but most people propel themselves with hand-made wooden paddles—difficult due to strong river currents. 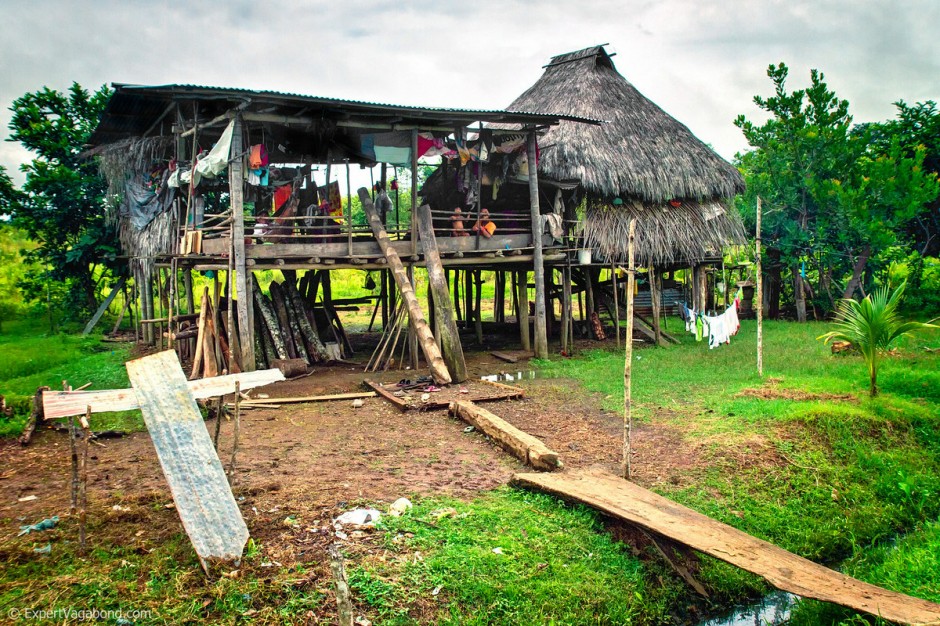 The Emberá Indians build their homes on stilts to protect against animals and flooding. The log ladder serves two purposes. Along with providing access to the home, if the notches are facing out visitors are welcome—if they are rolled under it means “do not disturb.” 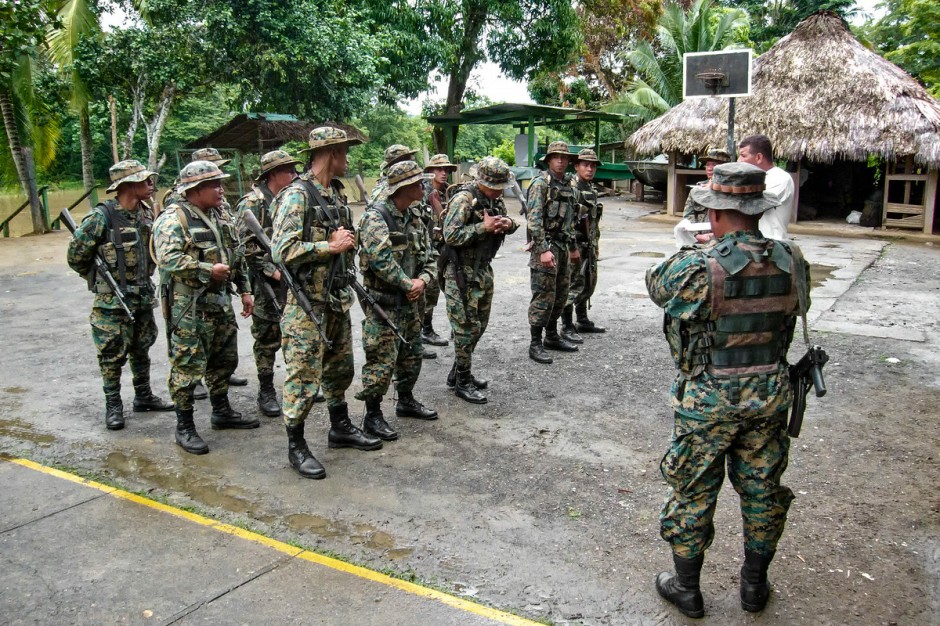 These guys may look like military soldiers, but technically they are Panama’s elite border police. Drug smugglers use the Darien to transport their goods over the border from Colombia. Access to most areas in the Darien without Senafront’s explicit permission is impossible. 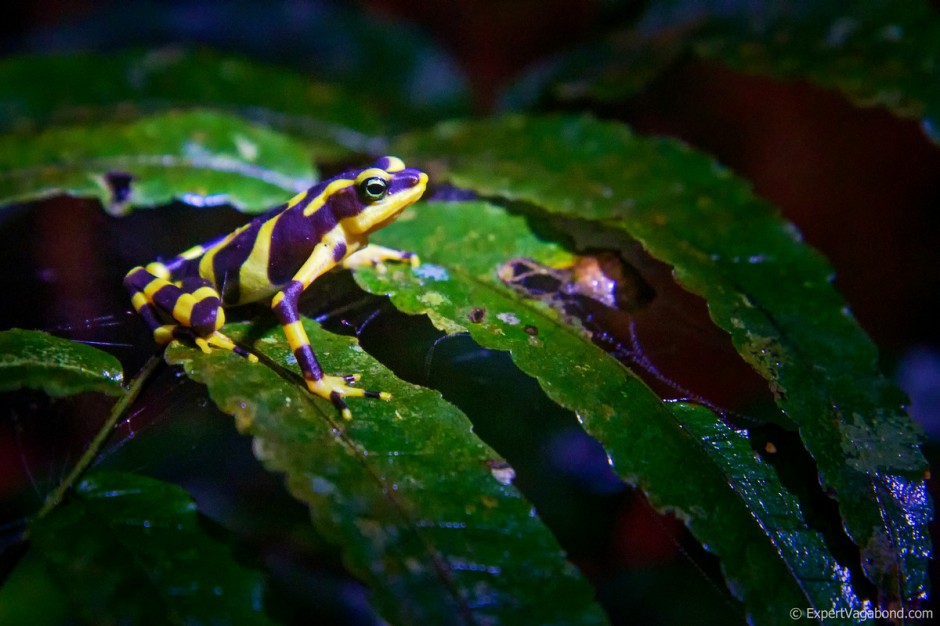 The Darien is home to many different species of frog. This is a type of poison dart frog, but I’m not yet sure what kind. If you happen to know the name of this species, let me know in the comments. 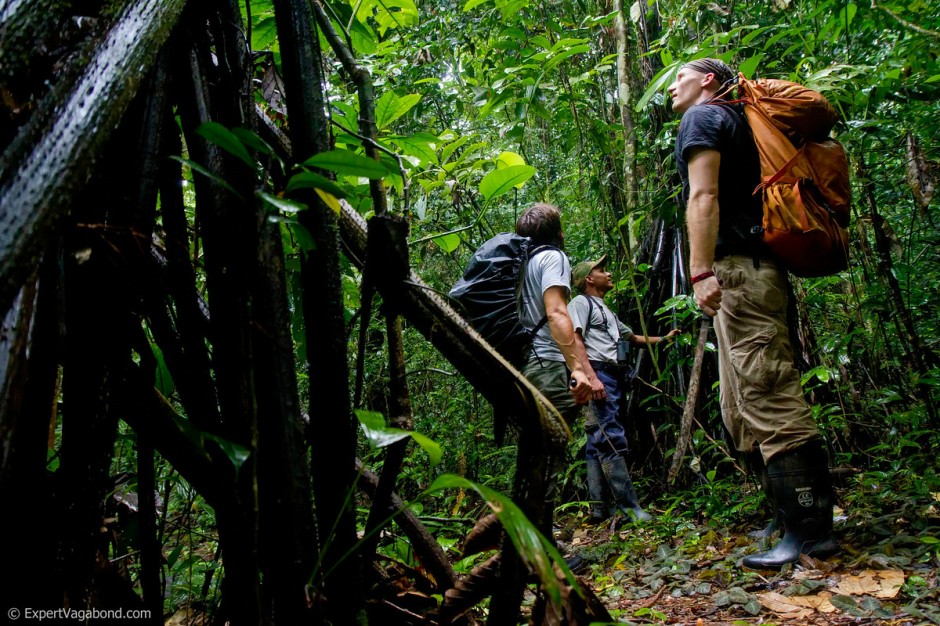 The Darien rainforest is a National Park and UNESCO World Heritage Site. With proper permissions you can go hiking and camping inside, as we did. It doesn’t get many visitors these days, though, so a machete is useful for clearing overgrown trails. 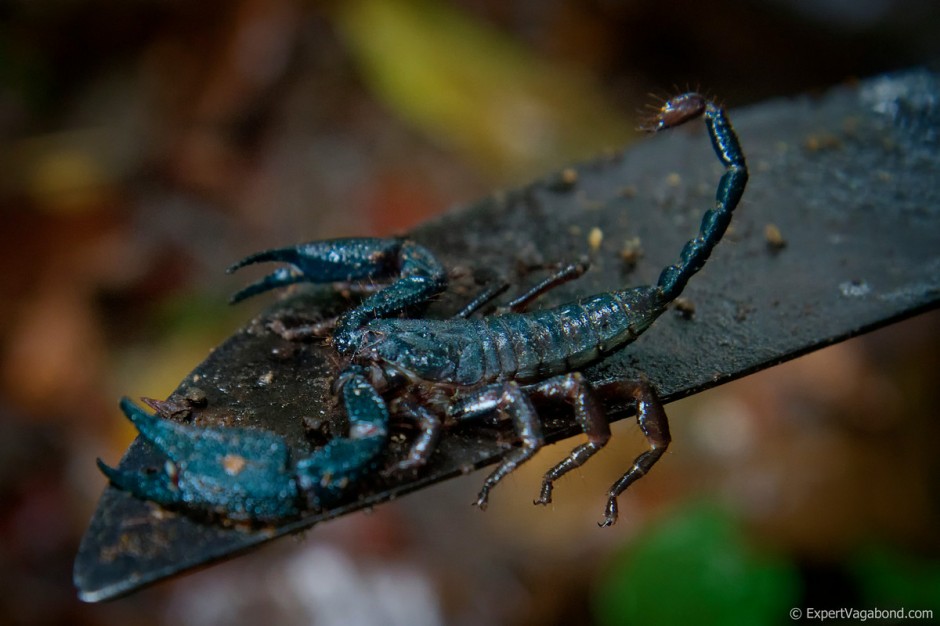 There are all kinds of dangerous creatures in the jungle, like this black scorpion we found while hiking. The Darien is also home to painful fire ants, deadly fer-de-lance snakes, jaguars, bot flies that lay eggs under your skin, wild pigs, and other animals you probably don’t want to meet up-close. 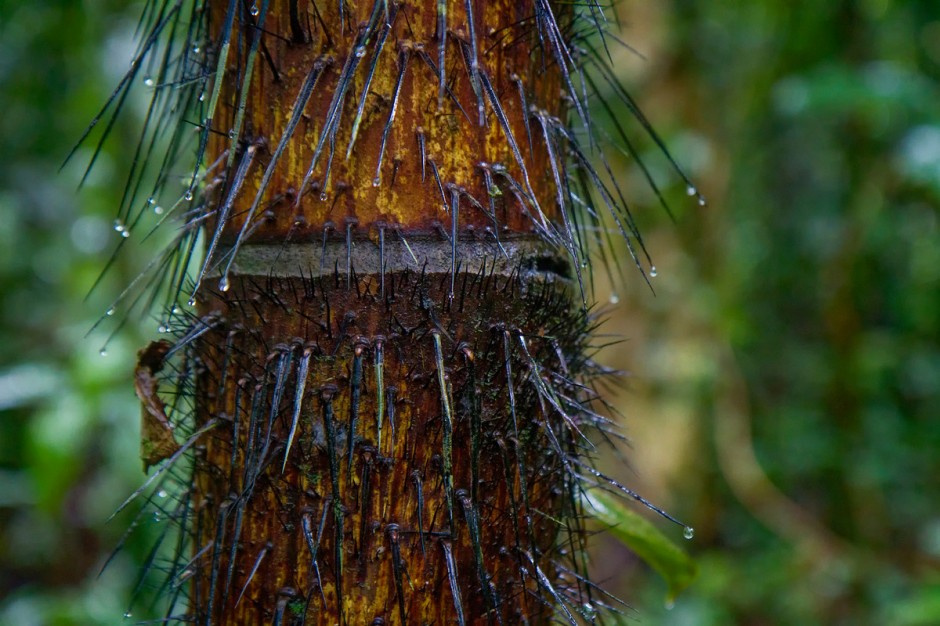 This tree does not like to be hugged. You’ve been warned hippies! The Chunga palm (also called black palm) is found throughout the rainforests of the Darien. Their long, very sharp, bacteria-covered spines can be pretty nasty if you’re not careful. 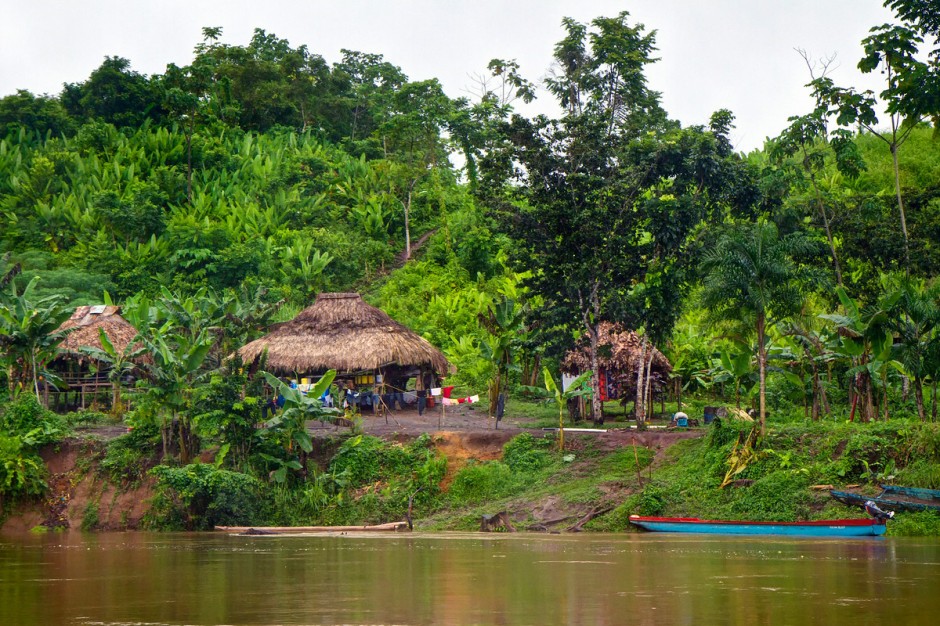 A majority of the indigenous people who live in the Darien earn money by growing plantain bananas, which are then shipped upriver to Yaviza and eventually sold in Panama City. This is a relatively new development—money was not a priority before hunting was banned in the national park. 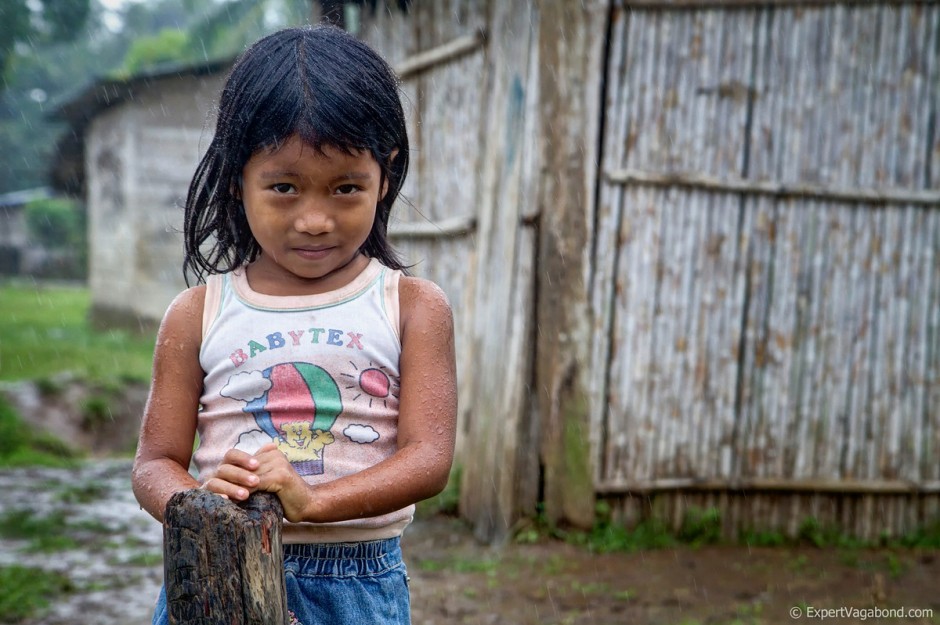 Along with some other kids, this girl came out in the rain to say hello as I stopped at a riverside security checkpoint in the Wounaan village of Vista Alegre. A few minutes after this photo was taken, the kids helped me save our canoe from floating away down the river with all my gear inside… 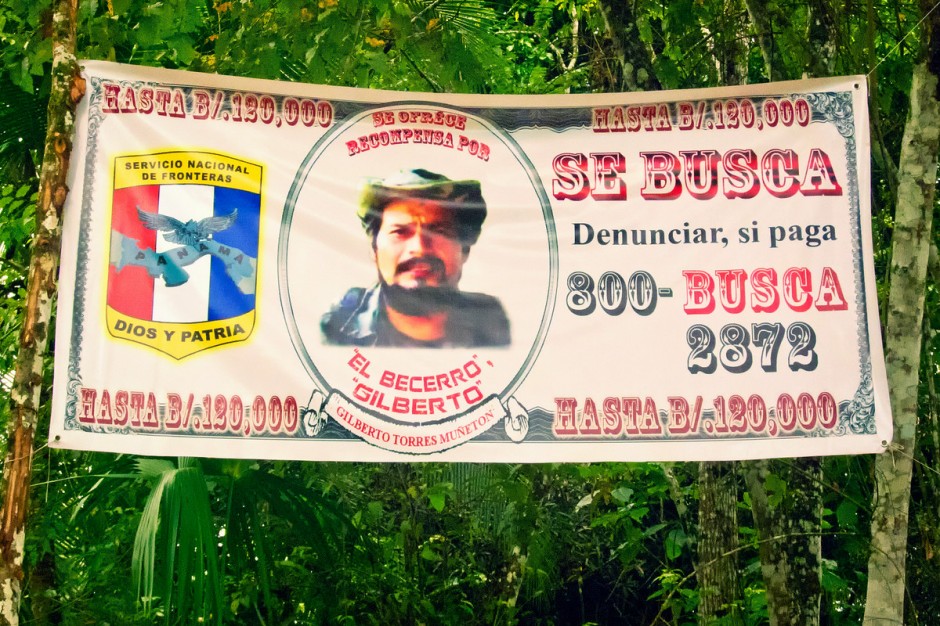 Meet Gilberto Torres Muñetón, aka “The Calf,” a commander of the notorious Colombian FARC guerrillas. He's wanted for drug trafficking, arms smuggling, kidnappings, and a bombing that killed 80 people along the border of Panama and Colombia. Wanted posters like this are found all around the Darien. 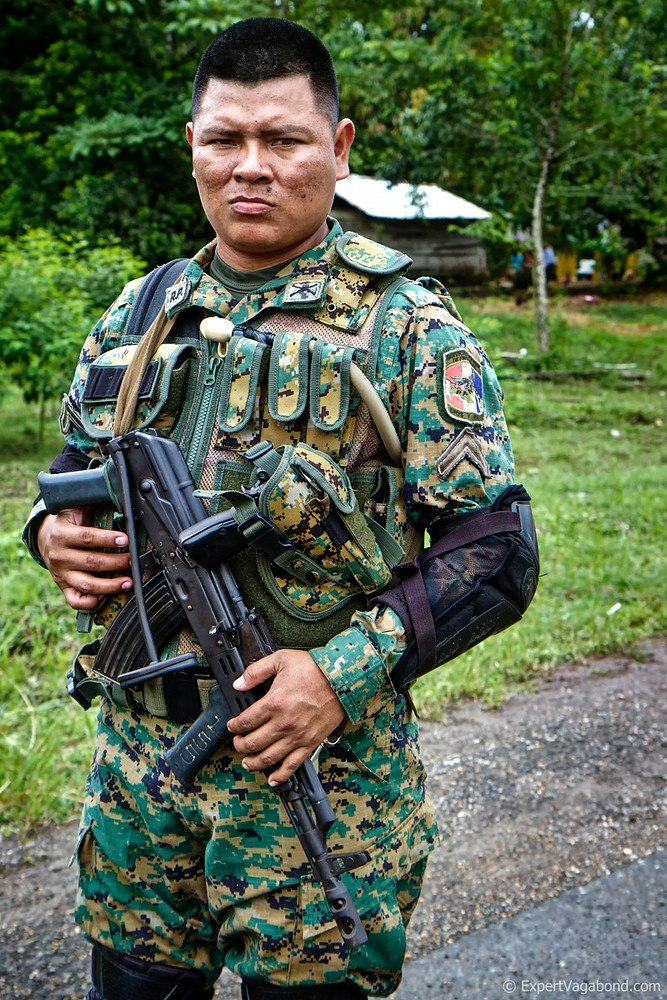 Private Wilson here guards a Senafront checkpoint on the road into the Darien. The Panamanian government is trying to reclaim the jungle from smugglers, bandits, and paramilitary groups. To be sure, there are plenty of camouflage uniforms and machine guns around. 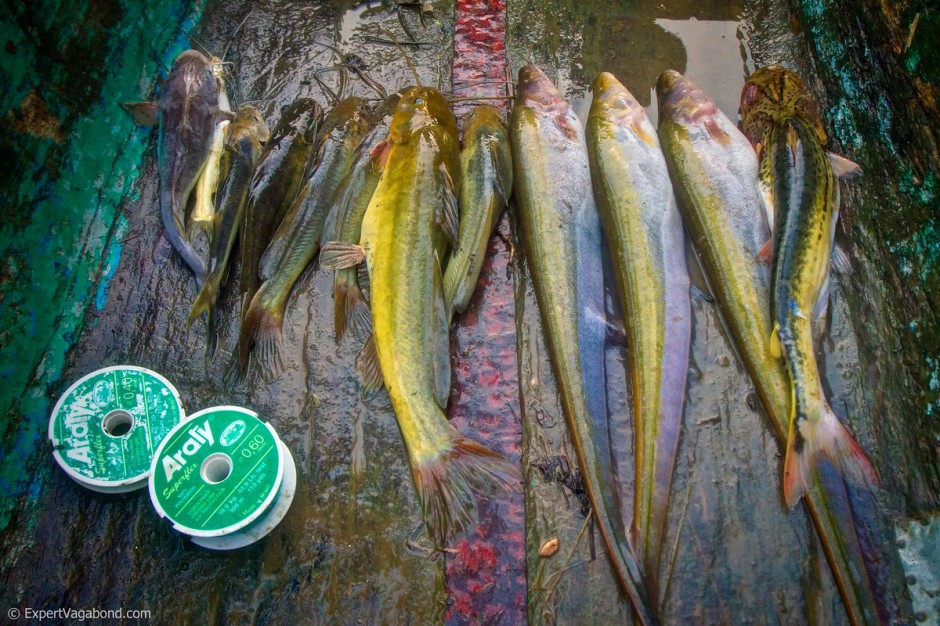 One day, our Kuna guide Isaac took us hand-line fishing on the Turia River outside the village of El Real. This was our catch that afternoon, some of which we proceeded to cook up and eat for dinner. The rivers are absolutely full of fish. Throw your line in and 1 or 2 minutes later there will be something attached to it. 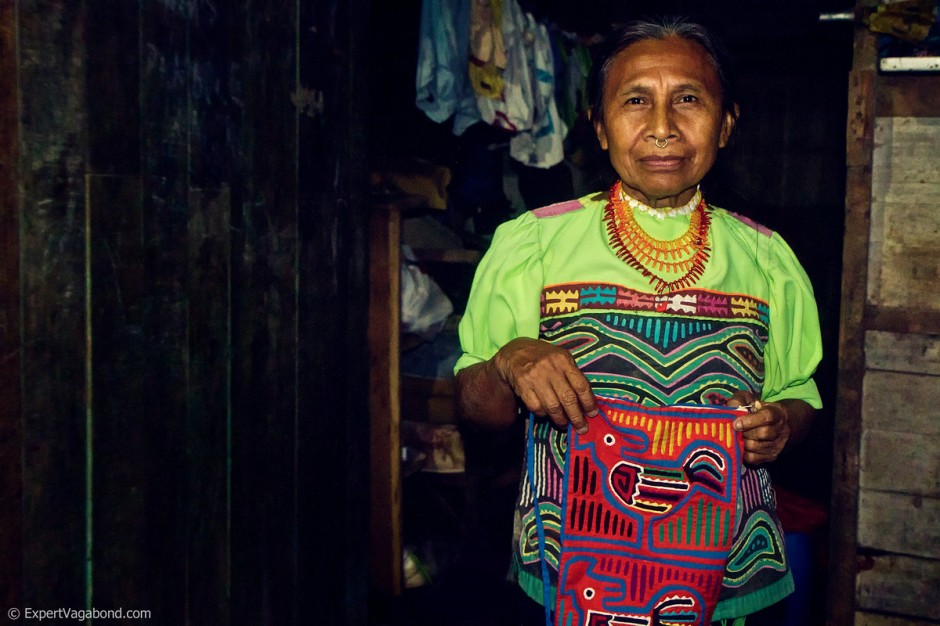 This is Mariana, our guide Isaac’s mom. She stopped in to say hello with her husband and show off their handicrafts, like this Mola bag. The Kuna are just one of three major indigenous groups that call the Darien jungle home. 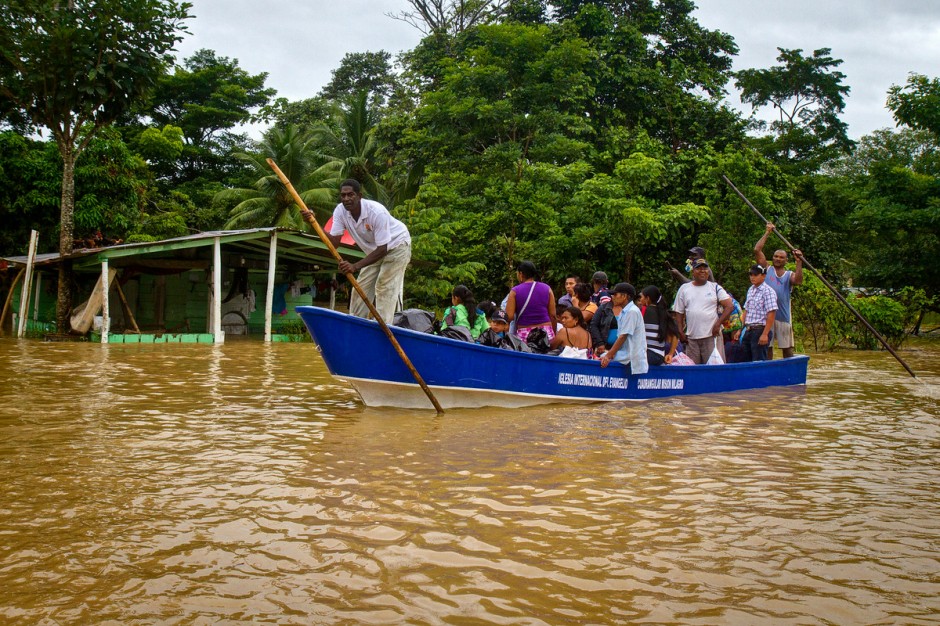 Flooding is a big problem during the rainy season in Darien Province. I experienced this firsthand when trying to leave the area. A river broke its bank and submerged the road, forcing everyone to pay for boat rides over to the next dry section of land about 300 yards away. 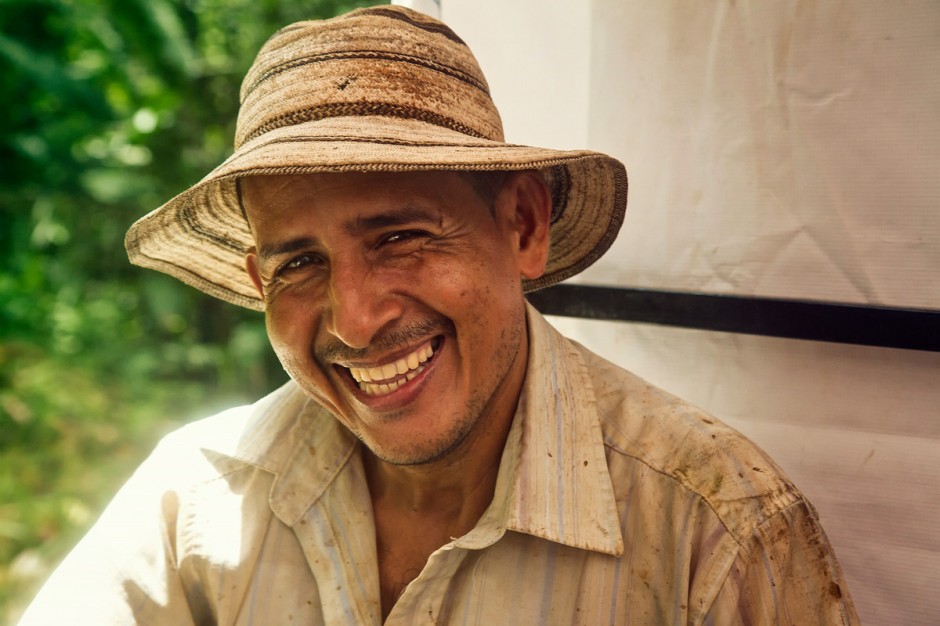 The Darien isn’t only populated with indigenous people. Panamanians and Colombians have moved into the area to start plantain banana farms, cattle ranches, and logging operations. This local farmer ended up hitchhiking with us in the back of a truck, his horse trotting along behind. 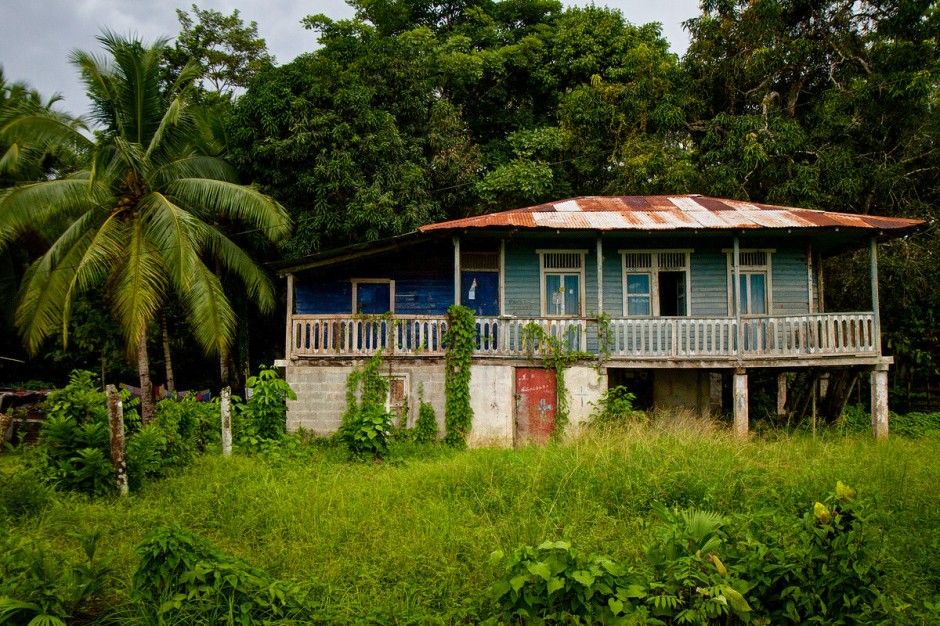 The heat, humidity, and plant life of a rainforest will destroy anything in its path, like this old house. Sunlight is prime real estate, and everyone (and everything) wants in on the action. If left alone, this building would quickly be eaten by the jungle. 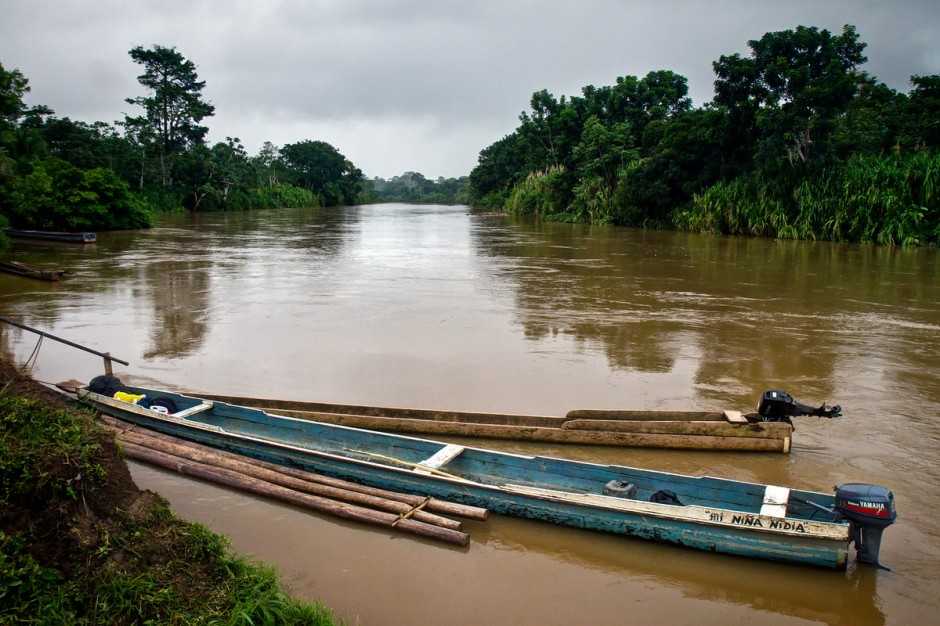 This is the mighty Turia River, a main artery of transportation in the Darien Gap. The river is dark and swollen from heavy October rains. We slowly motored up the river for five hours heading to the village of Boca de Cupe, where I was soon expelled by Senafront soldiers who feared for my safety. 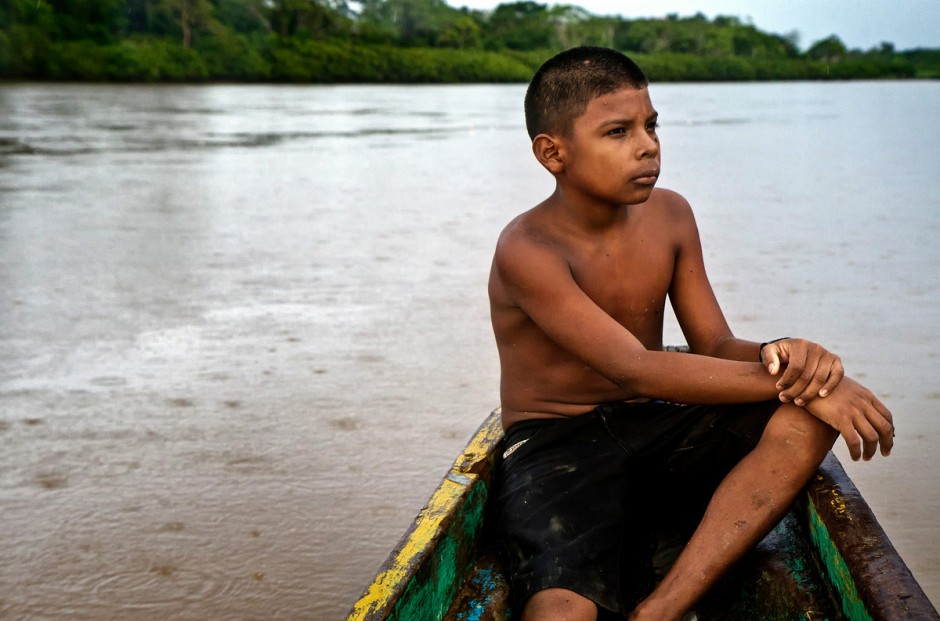 Canoe ride in the rain

Heading back to the village in a Piragua canoe after a rainy afternoon of fishing. This is my guide’s son in the front of the boat. The relaxed pace of life, interesting things to see, and complete lack of tourism are why Panama’s Darien Gap has been one of my most memorable experiences to date.

This post originally appeared at Expert Vagabond and is republished here with permission.

Tagged
Galleries Hiking Colombia Panama
What did you think of this story?
Meh
Good
Awesome

May 9, 2022 Elisabeth Sherman
✖
travelstoke
Download the mobile app
stoked by