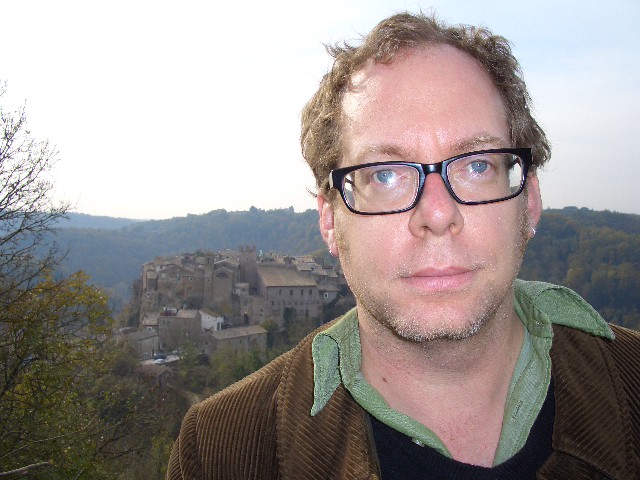 Eva Holland spoke to renowned “walking party,” first-time author and Matador member David Farley about his new book, An Irreverent Curiosity: In Search of the Church’s Strangest Relic in Italy’s Oddest Town. The story follows Farley’s search for the holy foreskin in a tiny Italian hilltown that was affectionately known as “the village of freaks.” See our accompanying review on Matador Goods.

So, the holy foreskin, eh? How did you find yourself studying such a bizarre footnote to Christian history?

I sometimes asked myself the same question—especially during the periods of self doubt. But having studied European history in college and grad school it seemed like the perfect subject for me: this unusual relic has been looming about the periphery of various historical periods and movements, from the Middle Ages to the fury that inspired the Reformation to the 19th-century Romantic movement. It was a fun challenge in writing the book to put the relic into a historical context for each period.

Your book actually began life as an article in Slate, right? At what point did you start thinking there was a full-length travel narrative in the making, and how did you make that transition from article to book?

Actually, a book was my original intention. But writing the article was a great first step. Plus, in the back of my mind, I had hoped the article would get enough attention that it would help me sell the book. And, in fact, that’s exactly what happened. The blogosphere went crazy over the article, people were talking about it on the radio, and people from the publishing world were emailing me asking if I’d sold the book yet. I often tell my writing students that the easiest way to sell your book is to write an article on the subject in a high-profile publication.

Was it a tough balancing act over there, between making friends, researching your book, learning Italian, and, I assume, writing for a living as well? Any advice on how writers can balance all their commitments while tackling something like a book project?

It wasn’t so difficult. I had fully absorbed myself into the village and into the history of the relic and the area. It all pervaded me to the degree that nearly everything I did could have been part of the narrative that would become my book.

As for magazine and newspaper assignments, they came much easier than when I’m back in New York. One fast-track way to getting assignments is to move to a country often featured in travel publications—like, say, Italy. You’ll get story ideas and angles much easier, you’ll appear “an insider” to editors because you’re living there, and you’ll come delightfully cheap since no one has to pay for you to fly across an ocean to get there.

The rolling hills of Calcata, home of the Holy Foreskin / Photo: draks

When you were still in Calcata, were you thinking ahead to the writing, and going, “Man, I need a dramatic climax to this story,” or were you too wrapped up in the mystery itself to think that far ahead?

I was hoping to have a conclusion that was less speculative, but I didn’t know what. Until I heard (from a Vatican insider) what happened to the Holy Foreskin, I had no idea how the book was going to end. So, not only I was I jump-up-and-down excited that my efforts had finally produced a conclusion on the relic, but I was also happy I was going to have an ending to the book, too.

There’s some pretty meaty religious history worked into the text. Could you give us an idea of the breakdown between research and writing time? Was it difficult to find a balance between the two?

I was—and still am—so obsessed with the history of the Holy Foreskin that it never felt like work to me. It was great going the Vatican Library and doing research and then spending the next day writing about it.

The most challenging part was actually balancing historical exposition and writing about my present search for the relic in the narrative. The transition between the two, while writing an accessible and comprehensive (and generally chronological) history of the relic, was almost like putting together a huge jigsaw puzzle in my mind.

What’s been the hardest thing about writing and publishing your first book? And the most fun, or satisfying? 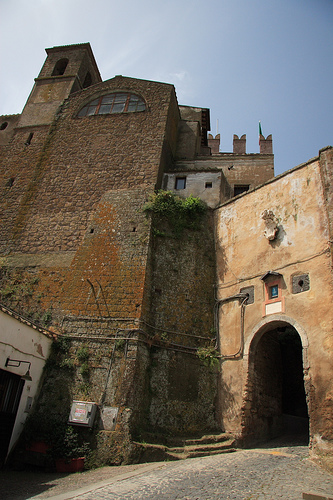 The only way into Old Calcata / Photo: paulspace

I wrote the first two-thirds of the book—60,000 words—in three months in Calcata, where I didn’t have very many modern distractions (like TV and the internet) and I wrote the last one-third of the book—30,000 words—in six months in New York City. If I had tried writing the entire thing in New York, I’d probably still be working on it. Now I understand the importance of writing colonies and retreats.

Finally, the inevitable question: What’s next for David Farley? Another book? Another weird town? Perhaps some well-deserved rest?

Trying to get the word out about An Irreverent Curiosity. Also, I’m just starting on another book project, but it’s in the very early stages, so I don’t want to go into much detail yet. I will say that it’s far from a travel narrative and will have much more consequence than stuff I’ve written in the past.

What did you think of this article?
Meh
Good
Awesome
Bookmark
Posted In
Photo + Video + Film
Destinations
Italy

Catania in Sicily is a blend of three distinct cultures, and it’s beautiful

9 traditional Sicilian dishes everyone who loves Italian food should know

The best places in Italy to explore by scooter