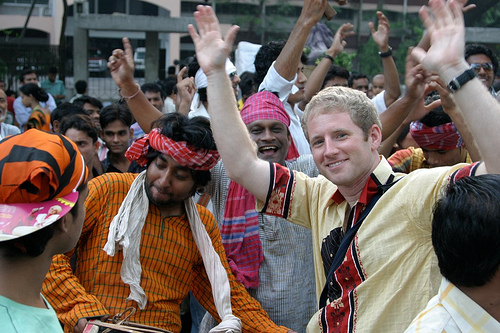 Kelsey Timmerman takes us through 8 years, and how he went from dreaming about being a writer to publishing his first book.

So you want to be an author?

Do you really? Seriously, do you really want it? Because it is possible.

When? That’s another question. But if you never give in, it will happen. I can’t tell you exactly how you’ll do it, but I can relate how I became a published author and what I learned about wanting it.

Your passion can’t be a secret.

The first night of my first major trip abroad, I was in Hawaii’s Waianae Mountains with a distant cousin who was living out of his van and driving a taxi. We were drunk on sherry and full of ramen noodles. I was 22 and a recent college graduate. My cousin asked what I planned to do as a career. I responded that I was thinking about writing, “like for National Geographic…or books…or something.”

That was the first time I said it aloud. I slept great that night. Sure, it could have been the belly full of carbs, the alcohol, and the flight, but I think it was because I declared right then and there that I was going to write.

And write I did.

The more you do something, the less you’ll suck (except for golf).

During the first few years, I made baby steps – my first paying online contribution ($20), a story in a couple of mid-range newspapers ($100-$200), and a few small newspapers ran my weekly column ($5).

I would revisit pieces I had written six months before to find that I could make them better. I looked at queries to fancy glossy magazines, embarrassed: “I wrote that?”

I was sucking less.

The same holds true today. The copy of my book that I read from at presentations has lines crossed out and rewritten.

You get to do what you love a lot more if someone will pay you to do it. But be patient. 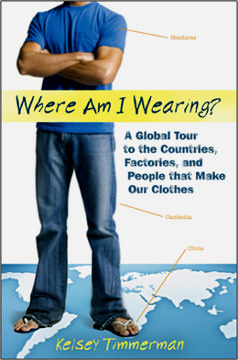 Writing about my experiences in Kosovo for $5 or spending the night at Castle Dracula in Romania for $150 isn’t really sustainable. I looked at the experience and the meager pay as my grad school. And, as grad schools go, mine was pretty cheap. But sooner or later you’ve got to be able to support your habit. Know that this will likely be later than sooner.

I’ve been writing for eight years now and until the last year or two my expenses outweighed my income.

Yes, they can be painful. If I have to sit through one more session on how to write a query letter, I’ll spend the workshop writing query letters to hitmen to off me so I won’t have to suffer any longer. But, if you’re like I was, and have zero connections in publishing and don’t even know anyone who has written a book, writing conferences are huge.

I met an editor of the Christian Science Monitor at a conference in Dayton, Ohio. I just ‘happened’ to share an elevator with her, and I just ‘happened’ to sit beside her at lunch. She remembered a piece I had pitched her a few months back (did I mention that I queried every newspaper in the nation with a circulation over 15,000?).

After the conference I sent her a new piece and she published it. That publication led to radio essays, which led to more opportunities, and eventually a book.

At a conference in Indiana, I met my agent and made a contact that led to a $3,000 assignment.

I wouldn’t have a book today or much of a writing income at all if it weren’t for attending writing conferences.

I had the idea of following the tags on my clothes around the world, but realized that no one would touch a new author who had to travel around the world to get his story. This wasn’t ideal. I paid for all of my expenses up front with the hopes that someday I might recoup some of them. I had a few assignments, but nothing that touched the costs.

There was a second mortgage involved. That’s how much I wanted it.

Basically a book proposal is a business plan for your book – who will buy it and how you’ll sell it – complete with a sample chapter. Make your sample chapter your best stuff and be sure that it’s its own self-contained story with a beginning, middle, and end that captures the best of what your book offers.

You could write the whole book before you send it to anyone, but by the time it moves across an agent’s and editor’s desks, you might not recognize it.

Subscribe to www.publishersmarketplace.com for their daily deals email. They report what agent sold what to whom. Pay attention to agents that are selling stuff like yours. Visit their website to see what their submission guidelines are and submit away.

Most agents want a query letter first and then they’ll ask for the whole proposal if the letter grabs them. Make sure that you tweak your letter and proposal how they like it. 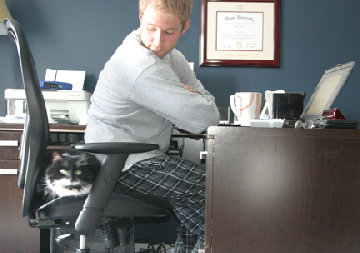 The author with writing assistant.

I was able to skip the query letter process after meeting my agent at a conference. She was hosting a round table and I asked her about an agent who had contacted me after reading my blog. Before she answered my question, she asked what my book was about.

It was love — or the agent-author equivalent — at first sight.

I signed with her. She worked her magic on my proposal and, the next thing I know, I’m writing a post for the Matador network about becoming an author.

Some have told me that I’m fortunate to have had a book published before I turned 30. I appreciate the comment, but deep down when I hear this I’m thinking about the hundreds of thousands of words I’ve written and the hundreds of rejections and no responses I’ve received in the eight years from my writing declaration in Hawaii to the publication of my book. There was some luck involved, but there was way more hard work.

I’m sure some become authors in less than eight years, some in more. Regardless, there is one thing that every author (who hasn’t been kidnapped, landed a plane on a river in a major American city, or cut off a limb with a pocketknife) shares…

They didn’t sit around hoping to be published. They wanted it, so they went out and got it.

For more on Kelsey Timmerman, check out our review of his book Where am I Wearing?

Please check out his blog, where he’s currently hosting an ipod giveaway.