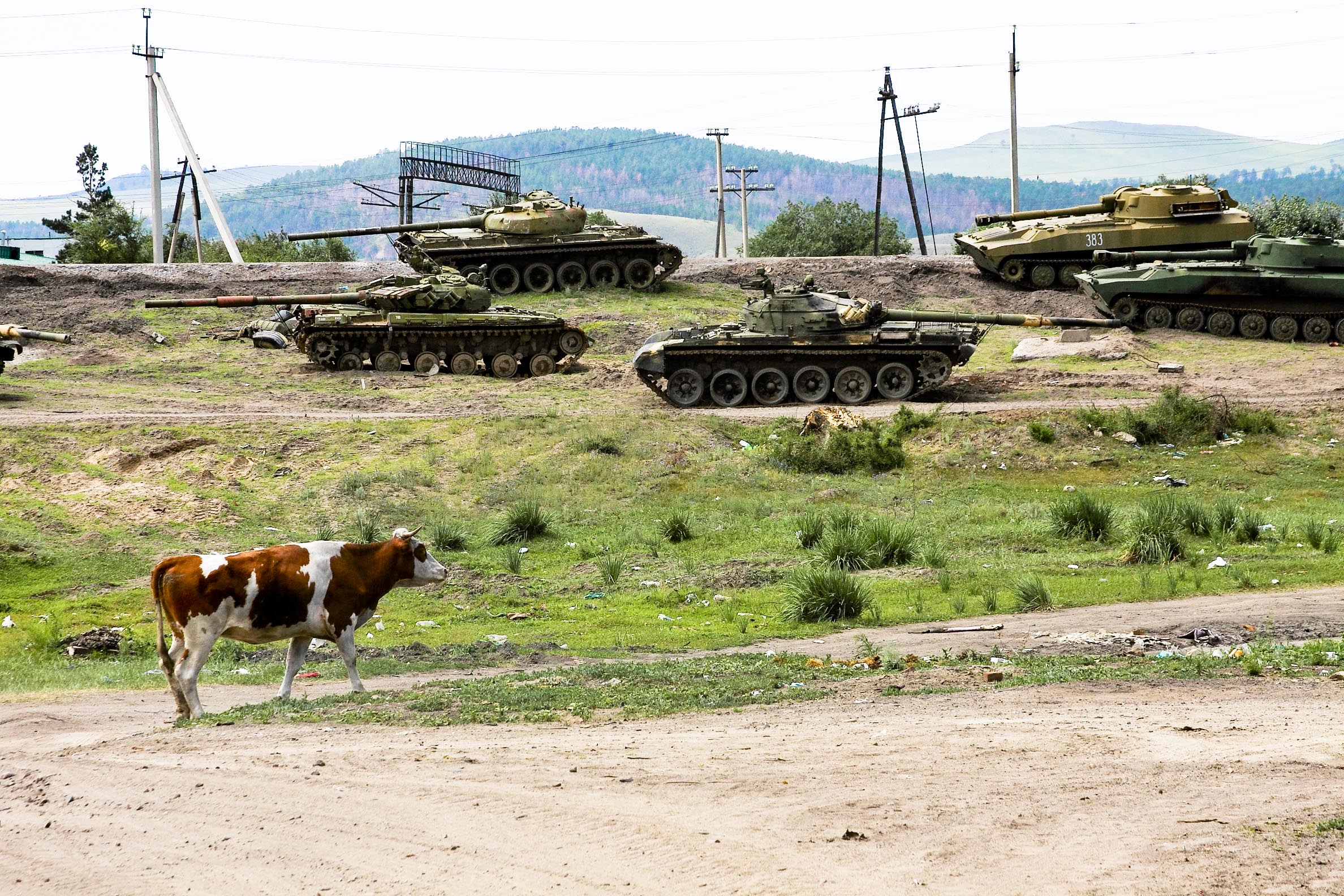 “This was the end of my thirty days in Russia: cows and tanks.” — MFB

SIDESTEPPING through generations of Russians who stood with shopping bags of picnicware and bedclothes, we scrambled to the first platform at Yaroslavsky where the midnight train stood minutes before departure.

We rushed down to the third berth of the third car in the third platskartny class.

Outside the car, a final snapshot reveals my host’s fatigue from having carried my sack from his flat at Taganskaya to the railway terminal. A manly embrace and a hasty goodbye sealed our weeklong friendship. 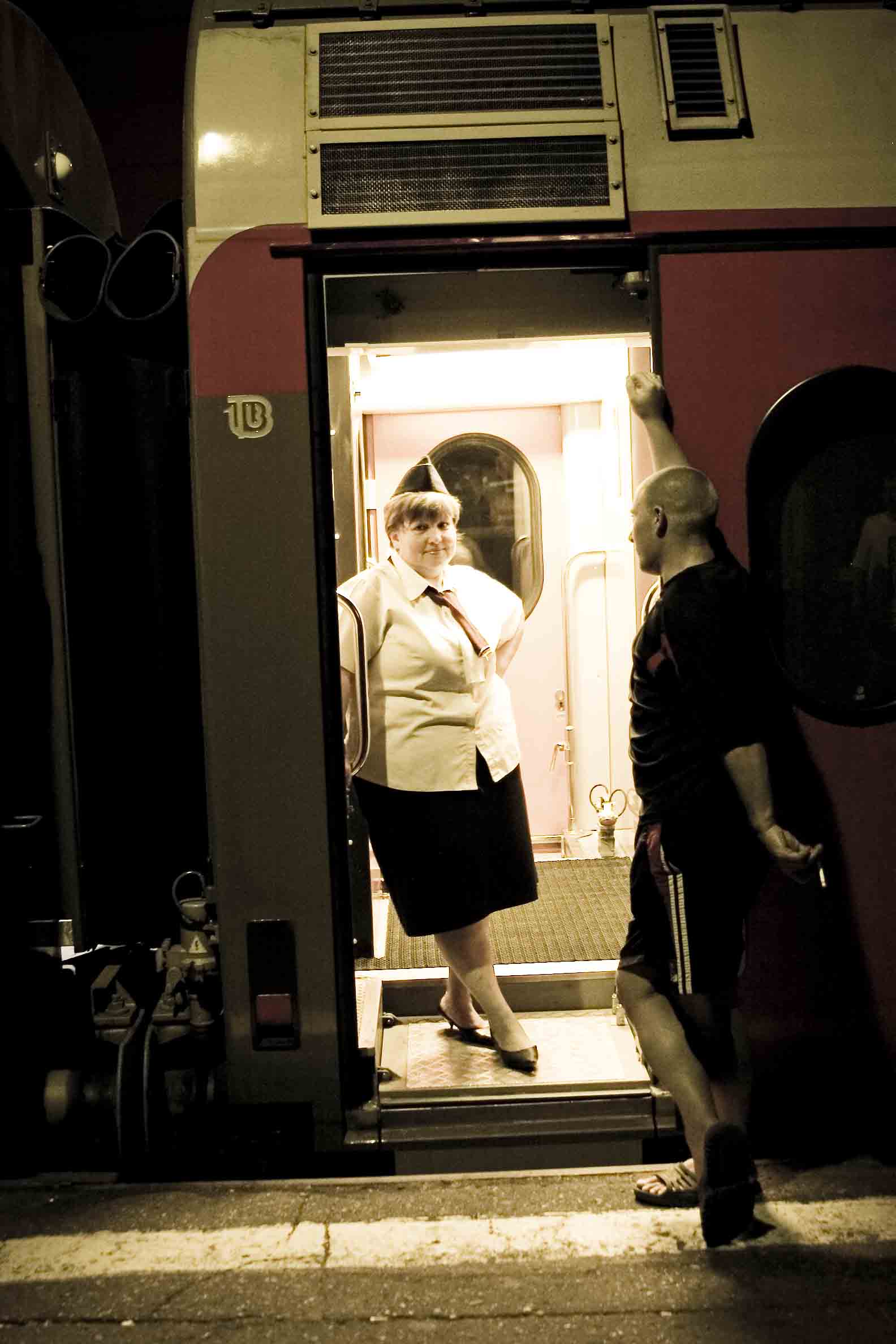 The provodnitsa, a stout old woman who shied away from my lens, hailed me aboard. The last passenger to arrive at the compartment, I awkwardly positioned my belongings, sat, and waited with my three estranged companions—all settled, all Russian.

The two men and the woman laughed at my sad attempt at Russian. Success.

“Where are you from?” the woman asked in English, hers being the better English, as the others eared in. I gave them my spiel, a two-minute performance basically outlining the contents of an online profile.

At the sound of my hometown of Los Angeles, the woman’s eyes widened and thought it kismet that we had met. It turns out that Julia had just returned to the Russian capital after working in PR at an addiction clinic in Baja California. A Russian doctor founded the project that catered to communities in Ensanada and Tijuana, but eventually closed up shop when funds had depleted.

After I mapped my eastward journey on the Trans-Mongolian, Dmitry, the older of the two men, who had been vague about his profession (something to do with chemical engineering), warned me in Russian to be careful not to take pictures of “secret places,” as Julia translated.

I asked her what he meant.

“He means that it would be very hard to explain to the police what you were doing here taking pictures.”

I felt uneasy by the suggestion. I didn’t know how to respond. The train rolled out and the air conditioning finally came on. We sat face to face in silence with Dmitry looking away whenever our glances met. 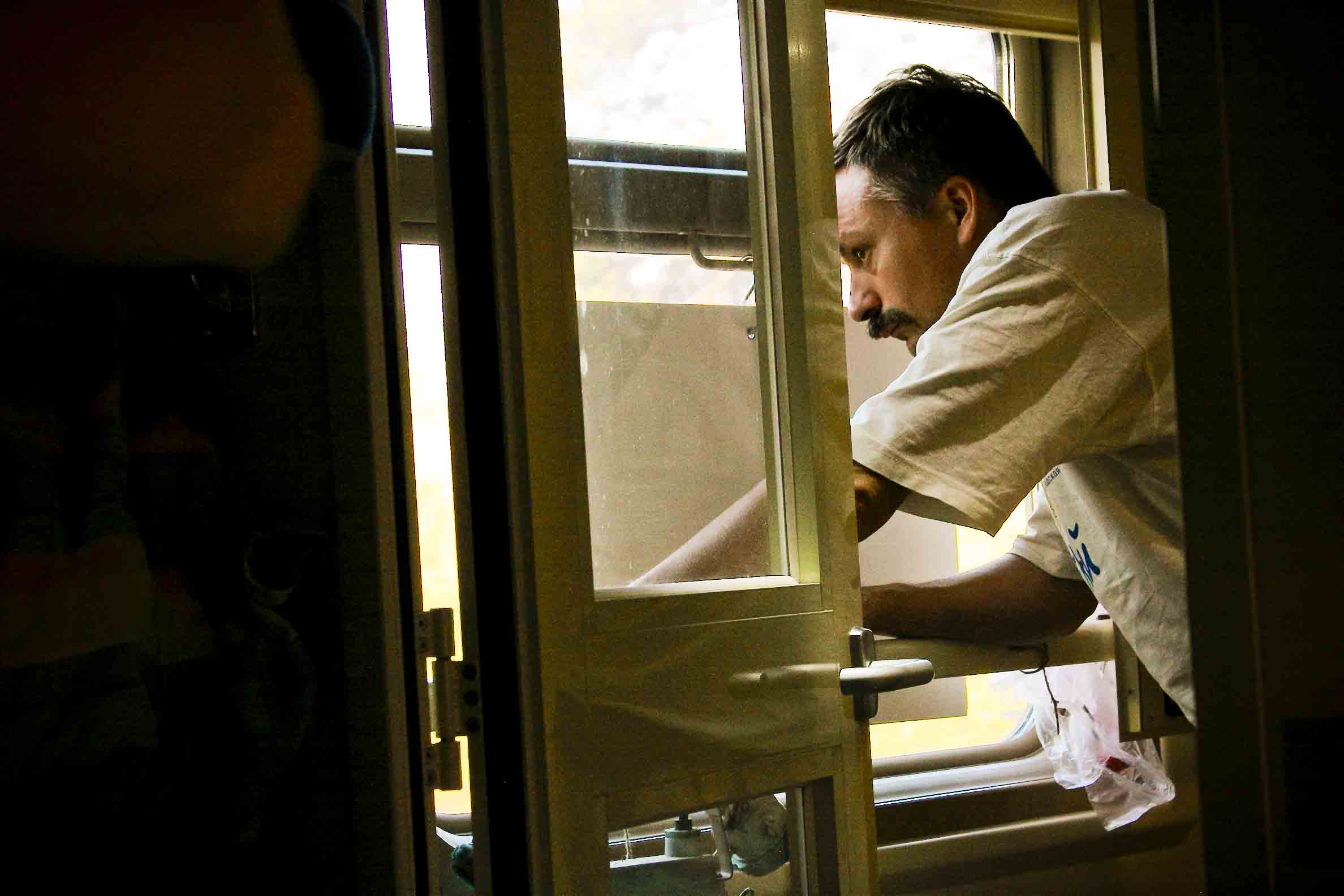 I pulled out my ration and was eager to share: chocolate wafers, dried herring, potato flakes, and a bottle of vodka. The guidebooks and other Trans-Siberian travelers I had met encouraged the onboard potluck. But was I wrongly advised.

When I proudly offered my ice-cold bottle of the distilled, clear liquor, they laughed and declined the invitation. Julia explained that the vodka-toting Russian is a false stereotype. I shrugged it off, realizing my mistake. I am a tourist, a real American tourist. 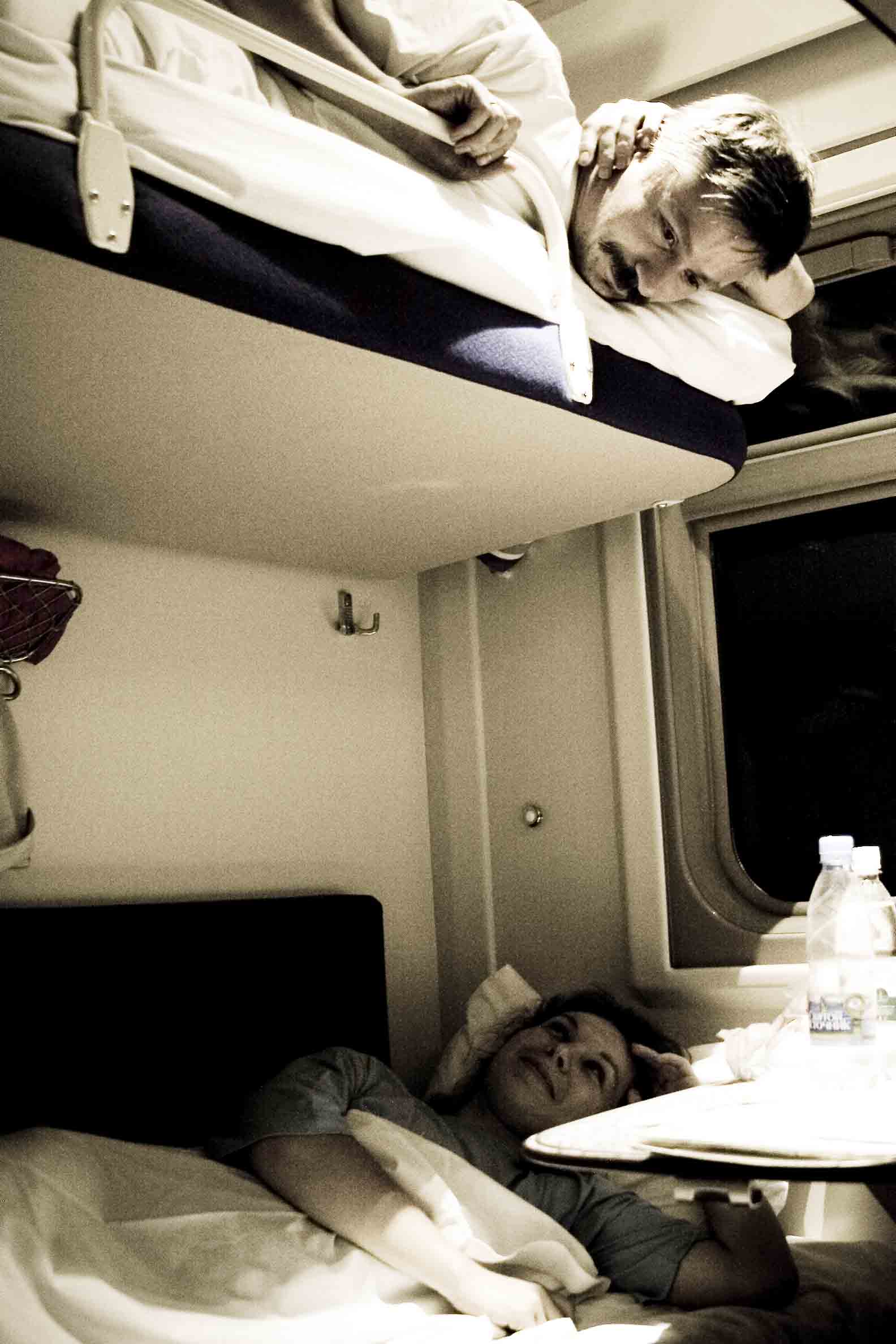 Dmitry and Julia All photos: MFB

6AM. The wagon car, nearly empty, was fast approaching Dzerzhinsk. My three berthmates were still asleep when the provodnitsa shook Dmitry’s arm informing him of our short arrival.

He and Julia were descending at the suburb 25 km outside of Nizhny Novgorod, while Sergei and I had one more stop.

When the train came to a halt, Julia handed me her contact information and wished me luck on my journey. Dmitry shook my hand, but as he stepped out of the car, he looked back and said inexplicably, “Dzerzhinsk is the chemical capital of Russia!”

I nodded and waved goodbye.

During the summer, Gorky families converge by the river Oka with fishing poles, beach towels, and trunks full of the customary Okskoe pivo (the local brew). But despite stereotypes of the parochial hamlet, my experience in the laidback river town of Nizhny Novgorod has been far from reactionary. 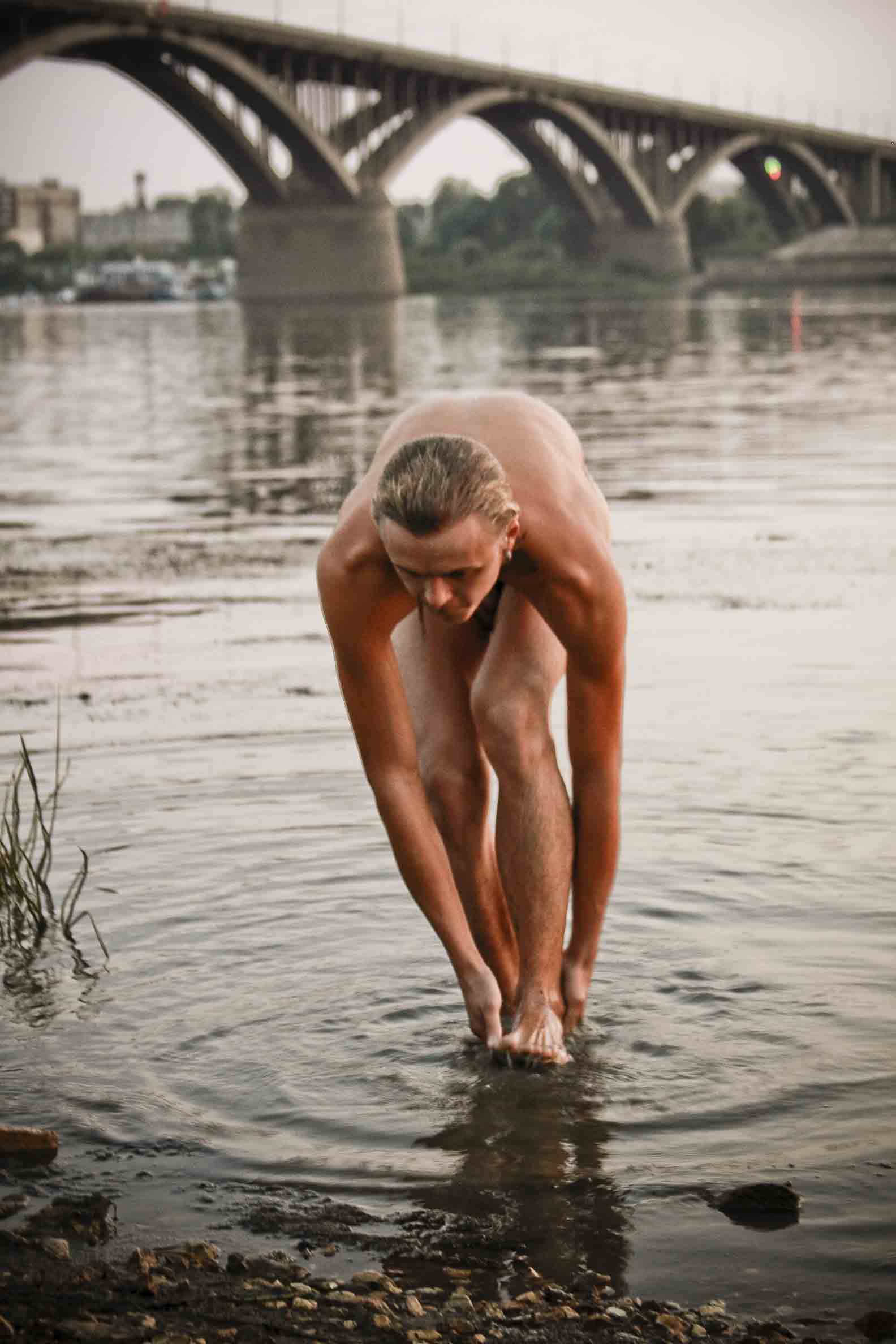 Sasha, my bright-eyed host, and his gang of twenty-something co-workers and friends invited me to a soirée beneath the Kanavinsky Bridge.

The kickback was typical of Berlin or Venice Beach where pockets of brownfield are festooned with neon dream catchers, tie-dyed textiles, and feathers.

After guests imbibed glasses of a mystery cocktail that turned out to be equal parts of vermouth, vodka and cheap champagne, the evening naturally devolved into impromptu fire dancing and skinny-dipping.

“Step slowly,” Eduard warned me from below. The next step could prove fatal.

My host in Kazan works as an ad man and spends his free time watching episodes of House and exploring the city’s wasted spaces. Today’s exploration: the former Hotel Kazan.

The abandoned structure stands four stories over Bauman Street, the main foot road in the city center. For the last twenty years, the edifice has been left in ruins. It is one of hundreds of abandoned buildings that stand as a testament to Kazan’s thousand-year history and the poor infrastructure of many post-Soviet republics. 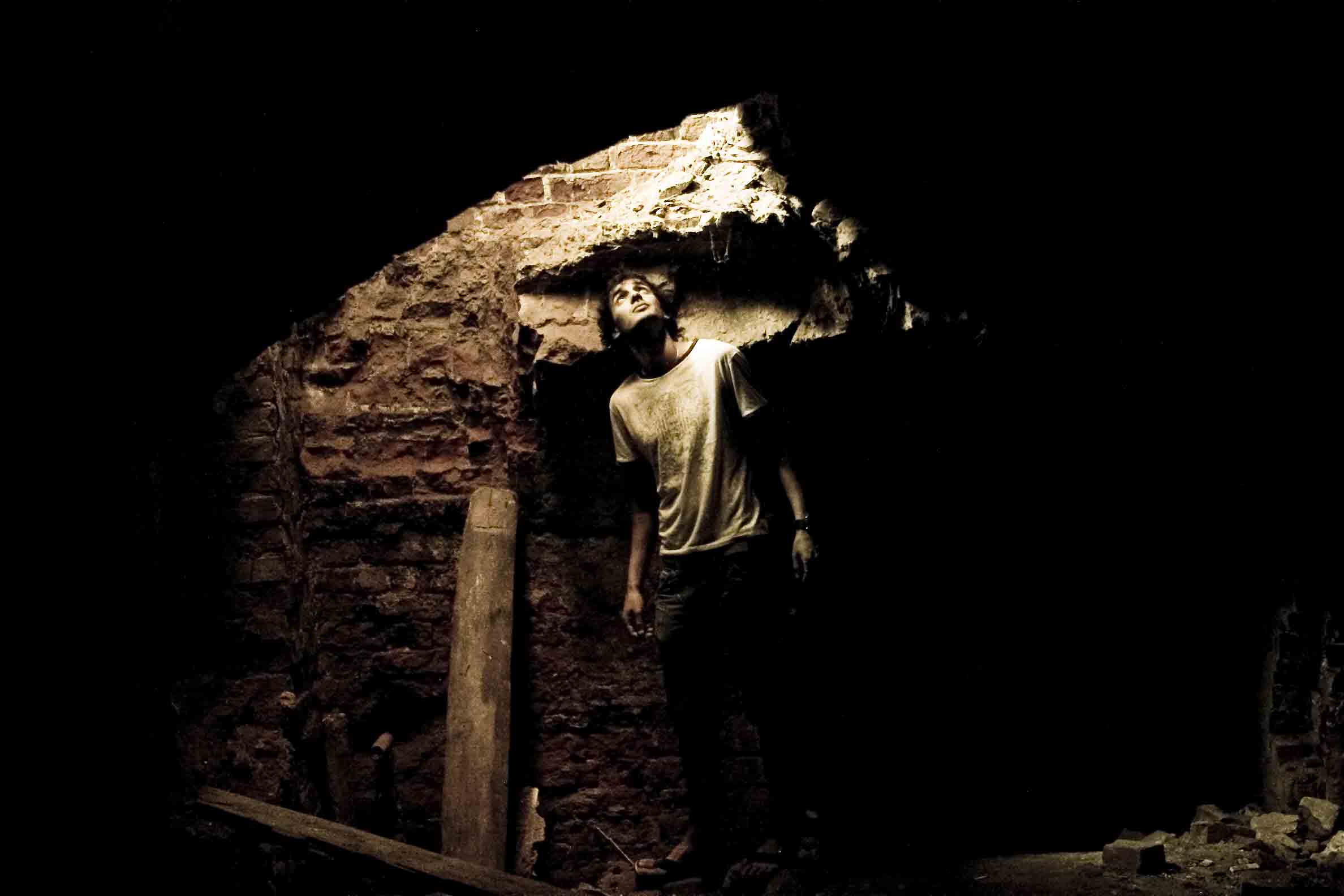 Today, metals sheets block the ghostly fortress shrouded with green, netted tarp. To enter, we crawled down to the sewer line from an indiscreet and unguarded opening opposite the hotel.

A calculated leap over the stagnant stream and a leg over a crumbling wall, I followed Edward into the damp cellars of the hotel. A light emanating through the rough cracks from above served as our guide.

Pulling ourselves upwards to the first floor, we reached a gutted hall that opens out onto a large courtyard. The scene reveals a site ravaged by an unnatural disaster: roofs split open for city birds to build nest, structural support spilled out onto the earth, fallen bricks and sodden planks strewn in piles across the overgrowth.

“What happened?” I asked Edward.

Finding the only stairwell left intact, we ascended. Each level contains vast salons gilded with patterned molding. But the once decadent interior now resembles a porous sponge with chips of paint peeling away, breathing with every gust of wind. Egg shells, glass shards, and empty bottles lie about, evidence of recent loitering.

Eduard paused. I halted in my tracks.

Cautious, he cupped his hand over his ear. We listened in for unexpected guests like ourselves. A rustling and a quick swipe against the dust echoed in the hall and repelled us from forging onwards.

“We’ll come back later,” Eduard motioned backward and we crept away back onto the main road.

The novelty of train hopping has faded.

In my third of ten trains towards Ulan Bator, I’ve become accustomed to the monkey gymnastics necessary to mount the top berths without grunting. I’ve memorized the toilet schedules, the release buttons and the physics behind the foldable berths and tables. I’ve perfected the etiquette of billeting, sheet distribution, seat sharing with your berthmates, the routine and the Russian for requesting cups and spoons from the provodnitsa.

But after all this, I am still too incompetent to engage with my fellow passengers. Language remains a barrier.

The scrutinizing eyes outweigh the accommodating smiles that acknowledge your presence. But perhaps I fail to consider the point of view of the lady visiting her daughter in Irkutsk; the salesman porting his briefcases of samples; the college student on his or her way home for summer vacation. Russian passengers expect comfort, amenities, and an expedient journey with no anticipation of encountering an uncommon, travel-worn face. The commodification of the Trans-Siberian railway is limited to the tourist’s perception of an exotic, “historical journey.” For Russians, it’s a normal part of life.

And so, sadly, a simple offering loses its welcome and becomes an obliging gesture. My berthmates continuously shun my wafer cookies and Lady Grey tea bags. Kein deutsch, aucun français, no “universal” English work. Where was my Russian education?

Thus, on my first daytime journey with no Russian willing to play, I left my berth and explored the train. I ventured out of third class and discovered the second-class kupe. The compartment doors were shut.

In the next car, a door opened to a man reading a paper and three kids playing with Legos on the carpeted corridor. The climate was much cooler. It had to be first class.

After five cars I reached an empty dining car. Three attendants sat around one of the tables. The void of customers precluded longer cigarette breaks. I sat in one of the booths. A waitress handed me a menu. With my index finger, I ordered the cheapest brew and a couple meat pies.

I munched on my six-dollar snack while watching the rolling countryside. “This is what people do on trains,” I thought.

Back at my berth, I read in my guidebook that a few kilometers earlier we had officially entered Asia.

Next Page
Tagged
Narrative Russia
What did you think of this story?
Meh
Good
Awesome