Holidays are sacred to me. Not being able to celebrate one in my traditional way seems wrong; I just don’t get that, you know, feeling. Despite this affinity for tradition, however, I’ve spent plenty of holidays away from loved ones.

Such was the case for Thanksgiving of 2011. A monsoon that year brought the costliest and possibly most intense flooding Bangkok had ever seen. I traveled there in November to do a radio story about the flood. The choice to go was entirely mine, but recognizing that the trip would require me to miss Thanksgiving caused disappointment. I knew I wouldn’t experience that feeling, the one that comes from family and tradition and doing everything in “just the right way.”

Over the course of my time in Bangkok I saw much of what I expected: lots of stagnant, standing sewer water; lots of people whose lives had been affected by the flood in degrees varying anywhere from “inconvenienced” to “turned upside down.” During my free time, I wandered about central Bangkok without particular awareness of the chaos a few miles away. In the northern parts of the city, however, water covered everything. 7-11s were looted down to the last scrap. Neighborhoods were mostly deserted. Residents traveled by boat or by wave runner (if they were lucky), or, for many, sitting atop giant pieces of Styrofoam. The water slowed normal life to a snail’s pace. 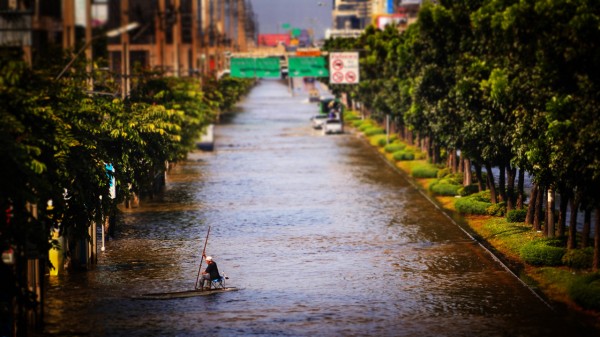 Man crossing flooded street on board

Instead of slipping into pre-Thanksgiving clichés about how the Thai people, for all their troubles, still taught me something about gratitude, I would like to point out that Thais, as much as any people, know how to be dissatisfied and raise hell. And during the flood times, residents of the Dong Mueang district grew understandably resentful that sandbags held the water in their neighborhood while manufacturing centers and other areas of commercial interest remained dry. They tossed legality aside and attempted to dismantle the barriers. Some people organized fundraisers. Others held demonstrations. Others threw together haphazard relief efforts. Taxi drivers became even more impossible to deal with, always concerned every route would be disrupted by flooded roads.

Additionally, I noticed a Thai phrase frequently in use among some American relief workers and locals. It sounded approximately like “Sue, sue,” and when called out was always met with a louder and more ecstatic “Sue, sue,” in response. “It means something like ‘fight on,’” a half-Thai friend later explained, “in a ‘don’t give up’ sort of way.” The prevailing attitude never appeared to be one that I would call “thankful” or any of its synonyms. It didn’t seem cynical either, and happiness remained in great supply. But there was no denying, times were hard. 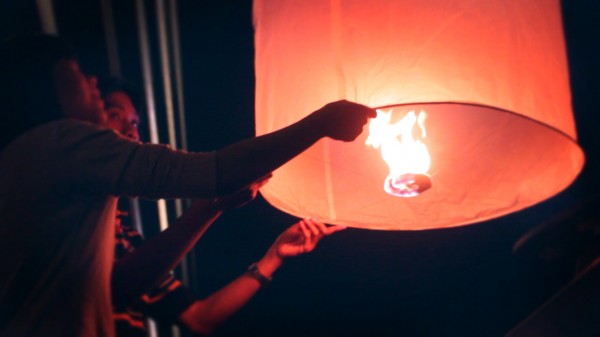 Then, unbeknownst to me, a holiday occurred: Loi Krathong. On any given year, Thais celebrate this day by placing small lanterns on bodies of water like the Chao Phraya River in Bangkok. The floating of the lantern is said to be symbolic of letting go of one’s anger and grudges. Traditionally, some believed the act of floating the lantern would bring good luck from the Goddess of Water.

When Loi Krathong took place in 2011, the flooding showed few signs of withdrawal. On that darkened holiday evening, visitors at the park stood 50 yards back from the river and set their lanterns afloat on the puddle that had spilled over the sandbags. The little boats, made of leaves and bread or Styrofoam, adorned with candles and flowers, never caught a current and repeatedly ran aground, collecting in corners like trash. Rather than traveling off toward the horizon, carrying away the pain of the month’s chaos, these lanterns piled together, refusing to go anywhere.

I never found a replacement for the holiday traditions I missed that year, not even on Loi Krathong. And Thanksgiving, which happened a short time later, passed without note, leaving me no clear memory of the actual day. 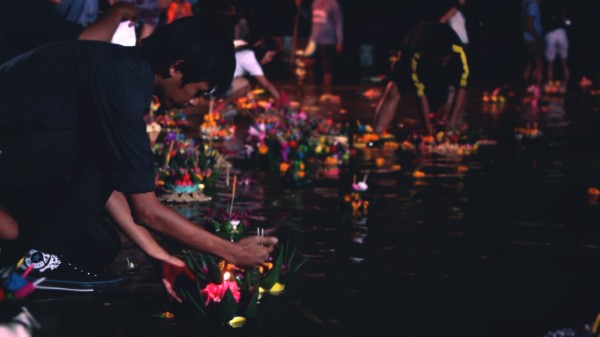 When I reflect on my holiday abroad, the thing I remember most is those piled up boats. Their lack of spacing. Their candles all gone out. I remember how the experience totally failed to live up to the photographs from previous years, with thousands of lanterns lit up, moving patiently down the meandering river, reflecting across glassy waters. 2011 brought a different holiday for all of us. Circumstances, though entirely different for me than for them, took us away from our homes that holiday season. A huge percentage of the city’s residents left their neighborhoods behind and sought shelter in hotels or with relatives on dry ground. And because I felt like being there more than being home for Thanksgiving, I stranded myself along with them.

That evening, I think we all felt like travelers, far from home and the traditions we treasure, searching for that feeling.

Tagged
Narrative Bangkok, Thailand
What did you think of this story?
Meh
Good
Awesome