It was a shadowless day in the Galápagos — overcast skies rendered the water grey and opaque, even in the shallow inlet where our boat rested. The ocean current carried us east at a walking pace towards open water. Beyond that, there was the Pacific, and at its dark threshold was the spot we were given to snorkel. This was not a postcard-friendly cove.

Twice in my life I’ve nearly drowned, or thought I would: the first when I was six, at a friend’s pool party for his birthday. The second time was off the coast of Italy, 16 years later and the day after my own birthday. A freak set of waves pushed me down hard against the seafloor in a succession of unrelenting breakers. When I finally made it to safety, deep cuts and dry heaves were my evidence of baptism — I’d been born again, but at the cost of a tremendous, irrational fear of the ocean.

These days, my heart splashes into my stomach every time I go surfing — usually when I first catch sight of the incoming set on the horizon. Surging whitewater paralyzes me, stifles my breath, and quickens my pulse. Death has more presence for me sitting on a surfboard than it does passing a traffic accident or watching the latest in breaking news. But still I surf because of its inherent balance, because that one wave is always worth it. Out here in the Galápagos, though, there wasn’t much to surf on, and I was unsure about the payoff snorkeling could offer.

An excited scream erupted from the surface of the water: Shark!

The median age in our tour group that day was 65, and everyone seemed enthusiastic about their last chance to snorkel before returning to Quito. I considered sitting out, feeling the all-too-familiar weak knees and nausea I always get before paddling out. My pride bucked up, defiant to be out-adventured by a group of retirees, but the rough water and current brought back visions of the ocean I thought I’d long overcome. My heart rate, which rests at a healthy 54, spiked with each memory.

Images of waves breaking on my head played, paused, and rewound again. I pushed 70.

A breath, a hand, a lifeline — there is no salvation in the ocean.

The rumor of penguins hijacked the crew’s excitement. One of the older ladies hurriedly donned her two-sizes-too-big wetsuit, her giddiness spilling out of her in rapid-fire monosyllables and flustered attempts to ready her camera. I hid my nervousness in routine, donning my own wetsuit and triple-checking the settings on my own camera. The water was plenty warm enough to swim without insulation, but I needed all the sense of security I could get, and a layer of neoprene seemed to do the trick.

Water filled my mask as soon as I slipped into the water. I choked and gagged and stalled, but the group was already off, paddling into the inlet and towards the bubbling coastline, leaving me as the only pair of dangling legs in the dark water. Swells lapped up to and past me, teasing me the way older siblings do just before they throw down. I wanted to catch up to the group, and every second I spent dawdling was another second alone.

Two quick tugs to the strap brought in the slack, and I re-fit my mask in a flurry.

For me, breathing is the hardest part about snorkeling. Syncing my erratic rhythm with my body’s own oxygen needs while facedown in the ocean always takes some getting used to. Otherwise, it’s a pretty simple activity — there’s a reason it’s great for tour operators in charge of a variety of age groups. For some, however, snorkeling can be daunting, and difficulty breathing compounds all other anxieties. 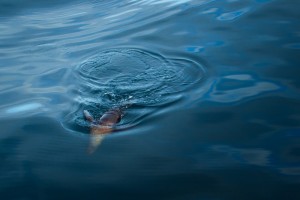 But there’s something special about it, too, dark water or not. I may have been the most paranoid swimmer to grace these waters, but watching sea life on a coral shelf unfolded the antidote to my fear — entire schools of colorful surgeonfish and Moorish idols wrapped us in a band of collective cognizance. Sea anemones rolled with the current, their movements restricted to the cycles of waves. And just ahead, at the spot on the ocean floor where the group was approaching: a sea lion pup, bearing down on us. Its movement betrayed its intentions; it looked ready to play. I teased it for some time, mirroring its movements and occasionally lunging towards it before kicking away quickly. We looped around each other like we were playing tag, but neither one was “it.”

An excited scream erupted from the surface of the water: Shark! The alarm sounded throughout the group; the aware tugged at the arms and fins of those still swimming. Some stayed put, wondering what to do. Others swam faster in the direction they had already been going. I whipped around in one quick motion, the way a surfer does when he sees the wave he’s about to claim. Our guide’s face was smushed behind his mask, but through it his eyes were electric, and he pointed to the seafloor, where the shark had just crossed our path.

I checked my mask once more, to make sure it wasn’t leaking again. Now was not the time for equipment failure.

I was aware of my heartbeat:

The author is a Matador Traveler-in-Residence participating in a partnership between MatadorU and Adventure Center. During 2011/12, Adventure Center sponsored epic trips for MatadorU students and alumni.
What did you think of this article?
Meh
Good
Awesome
Bookmark
Posted In
Outdoor
Destinations
Galapagos, Ecuador
Series
Adventure Center: Travelers-in-Residence
Matador Network © 2006-2020
✖
travelstoke
Download the mobile app
stoked by