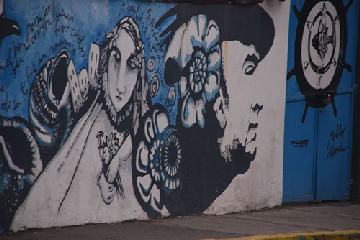 It all started with Neruda. Ten summers ago I read Full Woman, Fleshly Apple, Hot Moon, a bilingual edition translated by Stephen Mitchell.

At the time I knew nothing about Neruda or the way poetry and language could ‘define’ a place in time. Up until then the only thing that had done that was music.

That summer I was a camp counselor. I taught kids how to paddle. I’d go around dropping Neruda lines on anyone who’d listen–campers, other counselors. It became kind of a joke actually. I’d leave the book out so anyone could read it, and damn if it didn’t help to define that particular summer, the summer Neruda visited Camp High Meadows.

Hostile cordilleras,
hard sky,
foreigners: here it is,
here is my country,
here I was born and here live my dreams.

–from “Regreso” by Pablo Neruda, translation by David Miller

As I read the lines my eyes would drift across to the Spanish original and the strangely accented, Latinate words. I became fascinated and then all out obsessed. I wanted this language and rhythm and landscape.

All different factors came together after that. A couple thousand saved up. A gnarly breakup with longtime girlfriend. Within a year I was on a bus in Latin America listening to cumbia, head-tripped and depressed and stoked and trying to absorb the words.

My whole life has flowed from this. Strangely, it feels like ever since I’ve been both ‘living it’ and at the same time have been trying to ‘get back to it’. I think this is where writing comes from. Not writing so much as it’s framed in debates like this one, but more in the sense of writing as an almost existential need.

Poetry is the original form of storytelling (Iliad, Odyssey), and epic voyages were always at the center. In the 19th century, Walt Whitman’s Leaves of Grass was all about travel and place. In the mid 20th century was Neruda. Later you have Jack Kerouac, Allen Ginsberg, and probably most importantly as far as travel and place, Gary Snyder.

Later in the late 20th century you have Raymond Carver, who wrote poems about looking out of windows in Europe and runways in Buenos Aires and street fairs in Mexico as well as into the strait from his own backyard in Port Angeles Washington.

-From “Song of the Open Road,” Walt Whitman

As far as people still living, Jim Harrison writes poems about travel and places in Montana, Michigan, and the desert southwest. Billy Collins and Ted Kooser’s poems have elements of place, but seem more about little moments of ‘seeing’ than anything else.

Moving from there to the younger generations, the only well known poet I can think of whose work has elements of travel or place is Sherman Alexie. But it’s interesting, place is usually just a backdrop in his work–there are few trees, mountains, rivers.

Who is doing it now as far as upcoming generations? Most of the poets I’ve been reading online lately like Tao Lin, Brandon Scott Gorell, and Kathryn Regina write about the world in a way that is very detached from location or travel. Is anyone writing something that could be called travel poetry, or poetry that focuses on place? I googled travel poetry and the results were ultra thin.

Looking at this progression (albeit not very comprehensively), I wonder:

Are we moving towards a language and poetry where place names, geography, knowledge of terrain, and ‘identity’ based on place is no longer relevant?

Has the only ‘legitimate’ form for writing on travel and place become limited to the narrative essay or memoir?

Who is writing poetry now that explores connections with place and travel?

Please let us know your thoughts in the comments below.

The TSA has a new rule for snacks in carry-ons. Here’s why. The winners of the International Photography Awards revealed, and they’re stunning Japan will partially pay for domestic travel so you can explore more of the country Stonehenge will livestream its summer solstice celebration for the first time ever You can finally take a virtual tour of the rarely photographed Studio Ghibli Museum in Japan
✖
travelstoke
Download the mobile app
stoked by