BACK IN 1779, Kalaniōpu‘u and Captain Cook had a bit of a misunderstanding.

When Cook first arrived in Kealakekua Bay, he did so at the time of makahiki when ancient Hawaiians would honor Lono — a deity of agriculture and peace. With the billowing white sails of his wooden fleet a match to the white of his skin, Cook and his men were a sight unlike any ever seen before on the island. To honor the arrival of this fair-skinned foreigner (surely a deity incarnate) chief Kalaniōpu‘u of Hawaii Island bequeathed to Cook his symbols of rank: a red and yellow ‘ahu ula, or traditional feathered cloak, and a similarly feathered mahiole, or red and yellow helmet.

Made from the feathers of 20,000 birds that were caught and released in the forests, the cloak and helmet could only be worn by the highest ali‘i, or chiefs. Hand strung and tied together by the most gifted of ancient craftsmen, the pieces back then — as they are today — were considered completely priceless, and while all was calm while receiving the gifts, everything would soon change.

One of the native bird species, the mamo, has long since gone extinct, and the forests in which the birds once flew would soon disappear in the name of trade by future white men like Cook. Even the native Hawaiians themselves, whose population was hundreds of thousands before any western contact, would see their culture decimated by disease and repressed in the upcoming centuries. As for Captain Cook himself, after sailing away from Kealakekua in search of the Northwest Passage, repairs soon forced him to turn around and return to the sheltered bay, where signs of his mortal human existence caused his luster to fade. When Cook threatened to abduct Kalaniōpu‘u in response to problems on shore, it was a move that would ultimately leave Cook dead, face down and bleeding in the waves.

Though Captain Cook would never sail beyond Kealakekua Bay, the gifts he received from Kalaniōpu‘u would stay aboard the ship, and begin a voyage around the world that just this year has culminated in a powerful journey back home. 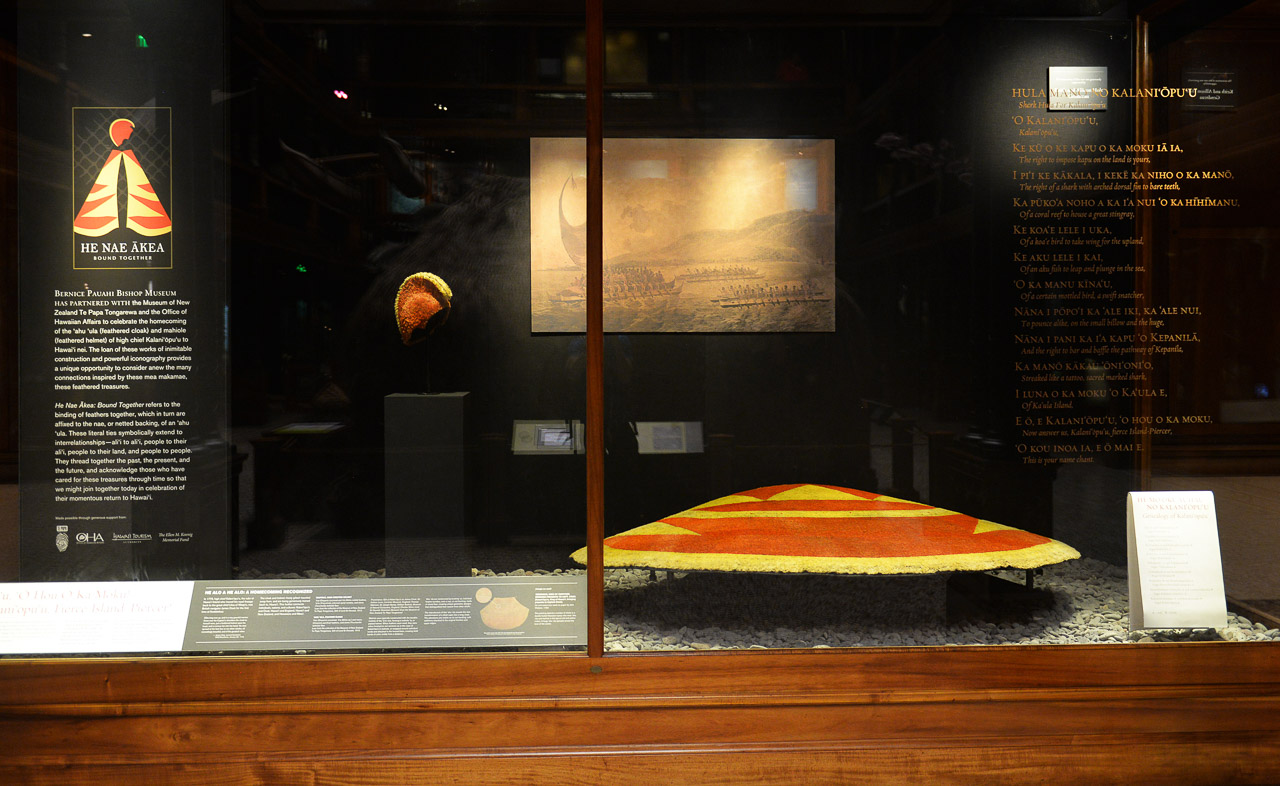 Though details are scarce, an account from a Hawaiian language newspaper speaks of the helmet and feathered cloak being traded in Siberia by Cook’s men in exchange for food and supplies, and eventually traveling across Russia to a private collection in St. Petersburg. Other accounts say they sailed straight to England, though all accounts align on the items being purchased by Lord St. Oswald, a British collector who in 1912 amazingly donated his entire collection to the Dominion Museum in New Zealand. Known today as Te Papa Museum, the seven-story Wellington museum is not only home to one of the world’s best collections of Polynesian artifacts, but also the place where the ancient treasures started their expedition home. As part of a long-term loan agreement, Te Papa Museum and Bishop Museum worked with the Office of Hawaiian Affairs to finally bring the ‘ahu ula and mahiole to Hawaii. Though the ‘ahu ula technically returned to Honolulu twice, both instances were very short and without the mahiole. Through a partnership with Hawaiian Airlines, these items that journeyed around the world inside the hold of a ship, would cross the date line aboard an aircraft and journey “back in time,” and technically land in Honolulu at an earlier date than they left. For the first time in 237 years, the ‘ahu ula and mahiole would finally be back home — a small but powerful symbol of the greater Hawaiian cultural awakening. 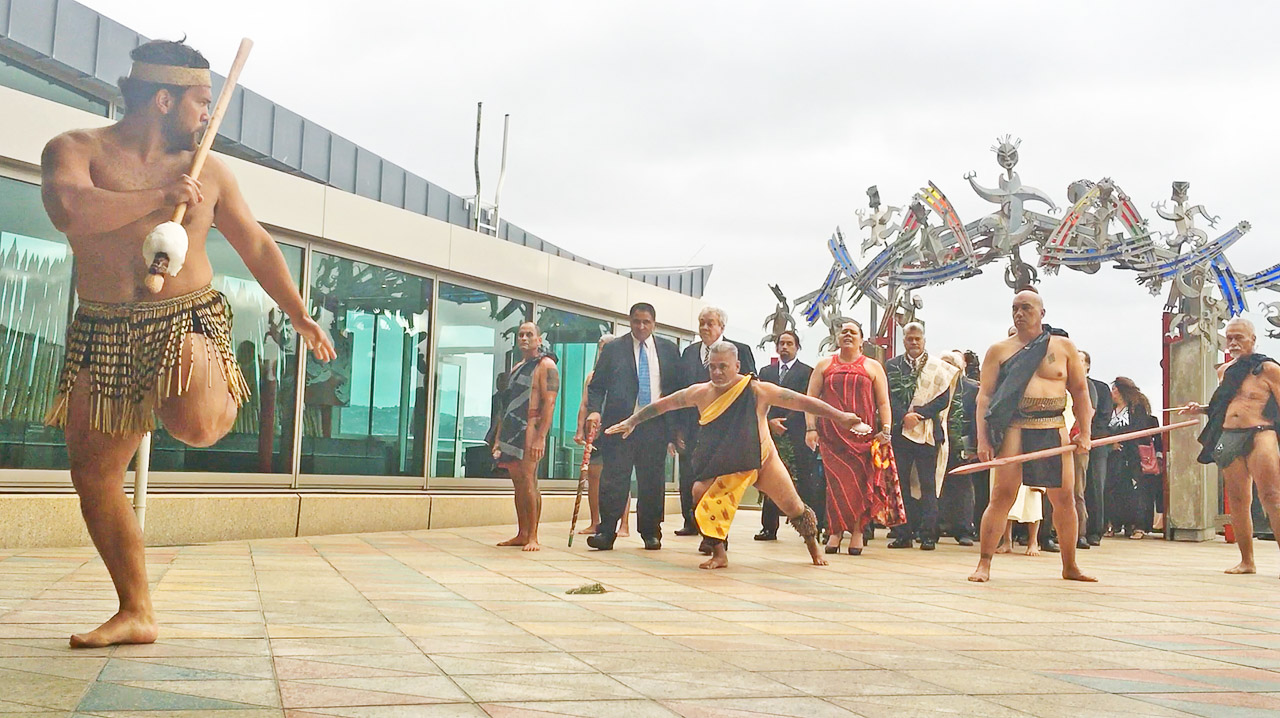 To commemorate the return, an Office of Hawaiian Affairs delegation traveled across the Polynesian Triangle to properly thank Te Papa Museum for offering the cultural treasures. In a somewhat fitting historical twist, Cook also sailed to Aotearoa (New Zealand) before “discovering” Hawaii, using the same wind that rattled the flagpole at the start of the powhiri, or ceremony. With a deep bellow from the pūtātara, or conch, the Hawaiian delegation entered the venue with a deep oli, or chant, and was met by a spine-tingling haka greeting by the local New Zealand Maori. 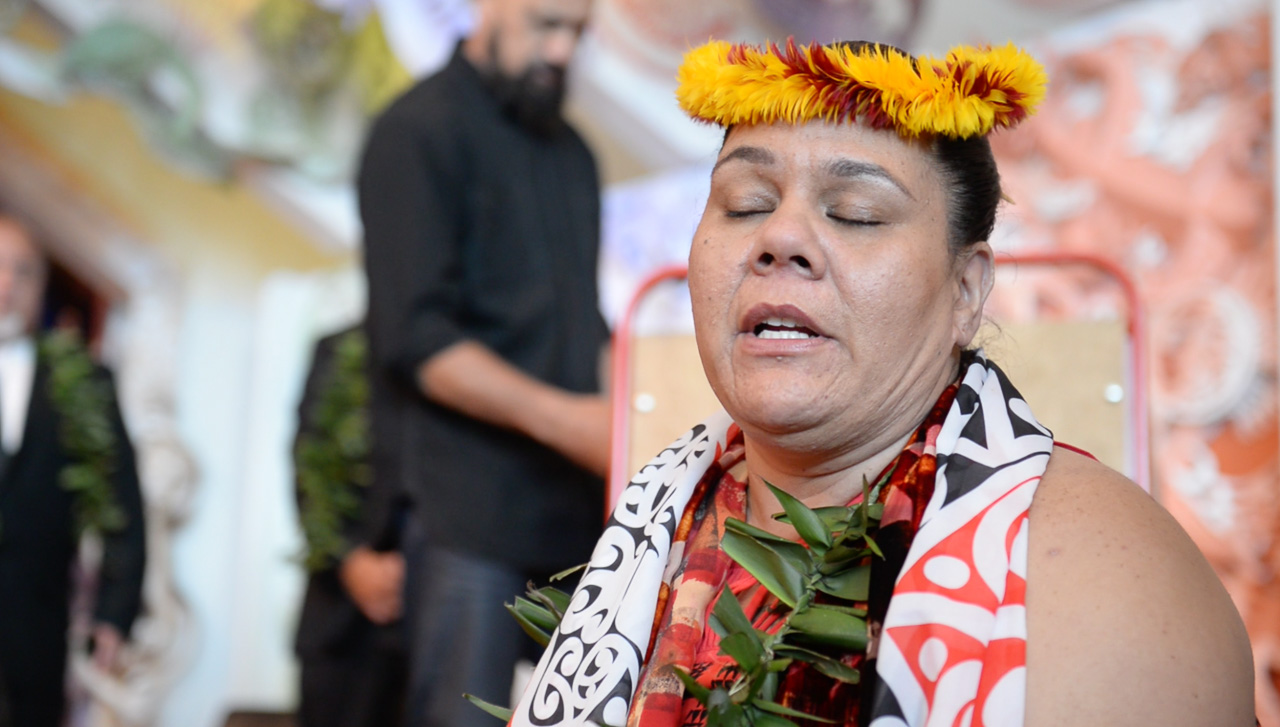 Oli, or chant, from members of the Office of Hawaiian Affairs Delegation

Over the course of the next three hours, the Hawaiian delegation offered handmade gifts such as exquisite umeke wood bowls, and Hawaii Pono‘i — the National Anthem of the Hawaiian Kingdom — was proudly sung in the hall. Tears openly flowed from both sides, as similar languages, Hawaiian and Maori, coursed freely throughout the air, and the enduring strength of Polynesian culture was powerfully put on display. 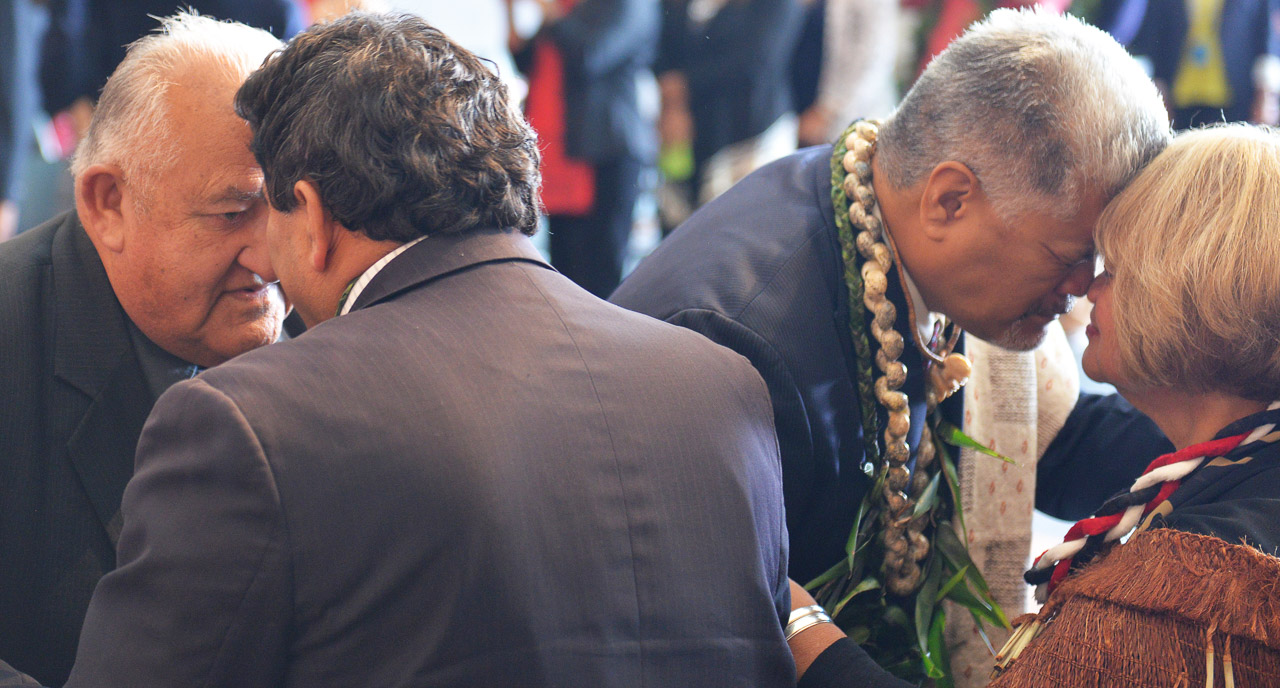 The traditional honi, or sharing of breath, between Hawaiian and Maori elders

As a Maori elder said of her tears, “the spirit was just so strong,” and it’s a feeling that would resonate across thousands of miles as the items were carefully boarded in crates and flown to Honolulu. 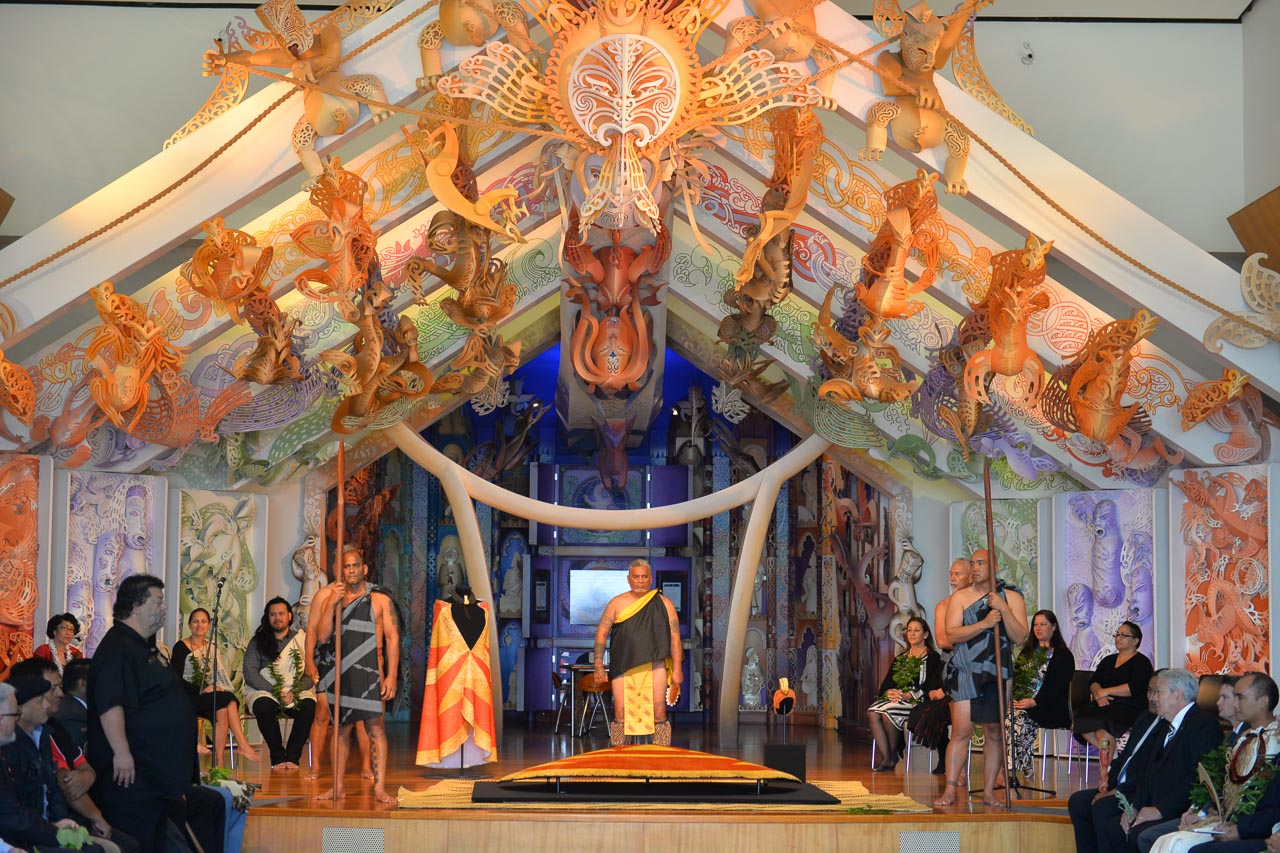 There, in a record-setting ceremony with 2,700 people, museum staff spoke of "chicken skin,” or goosebumps caused not just by seeing the cape and helmet displayed, but the interest, turnout, passion, and pride that modern Hawaiians showed in welcoming Kalaniōpu‘u back home. 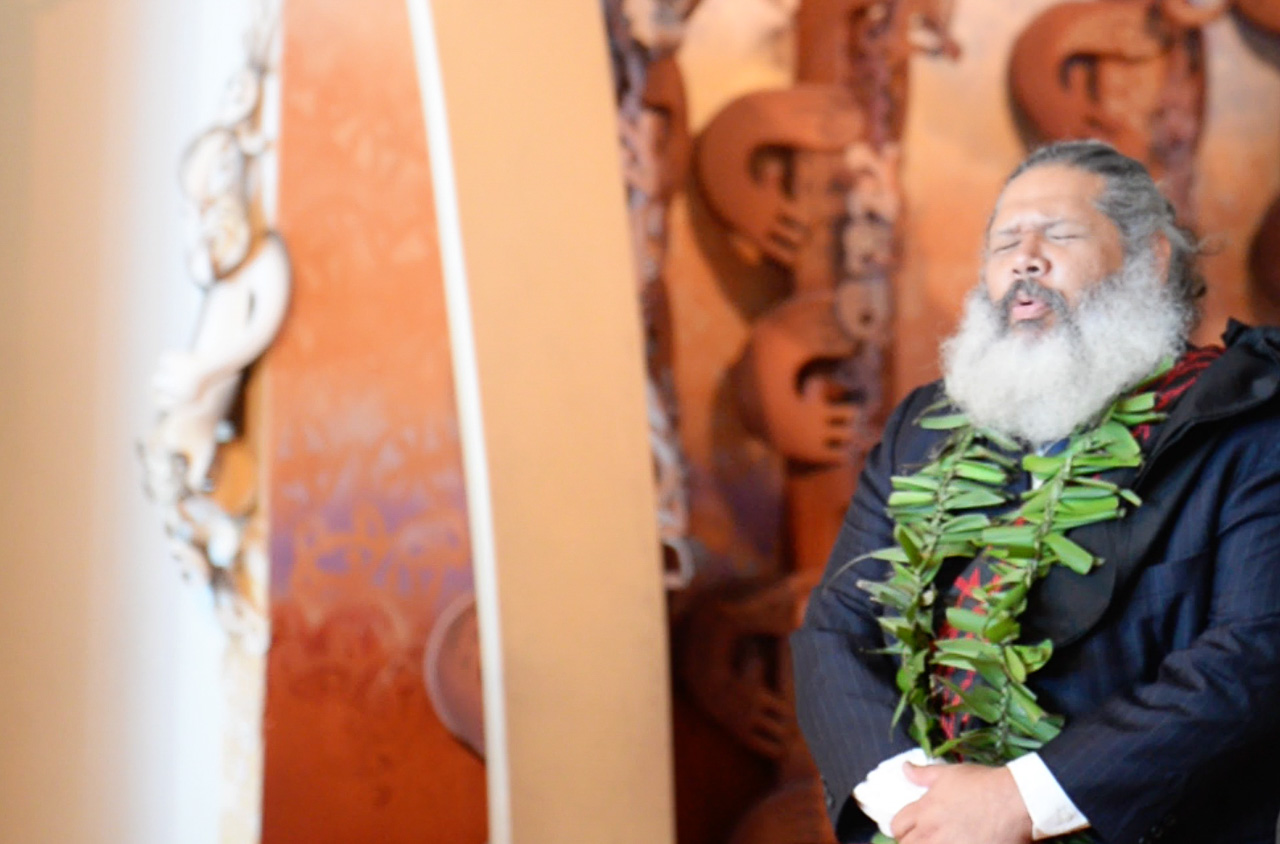 As the Hawaiian Renaissance, or cultural resurgence, continues to grow in the islands, and talk of sovereignty, or Hawaiian independence, grows louder and clearer each year, the return of these items is more than simply antiquities journeying back home; it’s a catalyst for instilling pride in the next generation of native Hawaiians, to help them learn the royal heritage and history of a time when Hawaii was once a self-sustaining society. It’s hearing the Hawaiian language spoken at a ceremony welcoming them home, and the fact that it’s actually understood by an increasing number of youth. It’s seeing a young girl’s face as she stares through the glass in Bishop Museum, and her sudden interest in featherwork and native cultural arts. 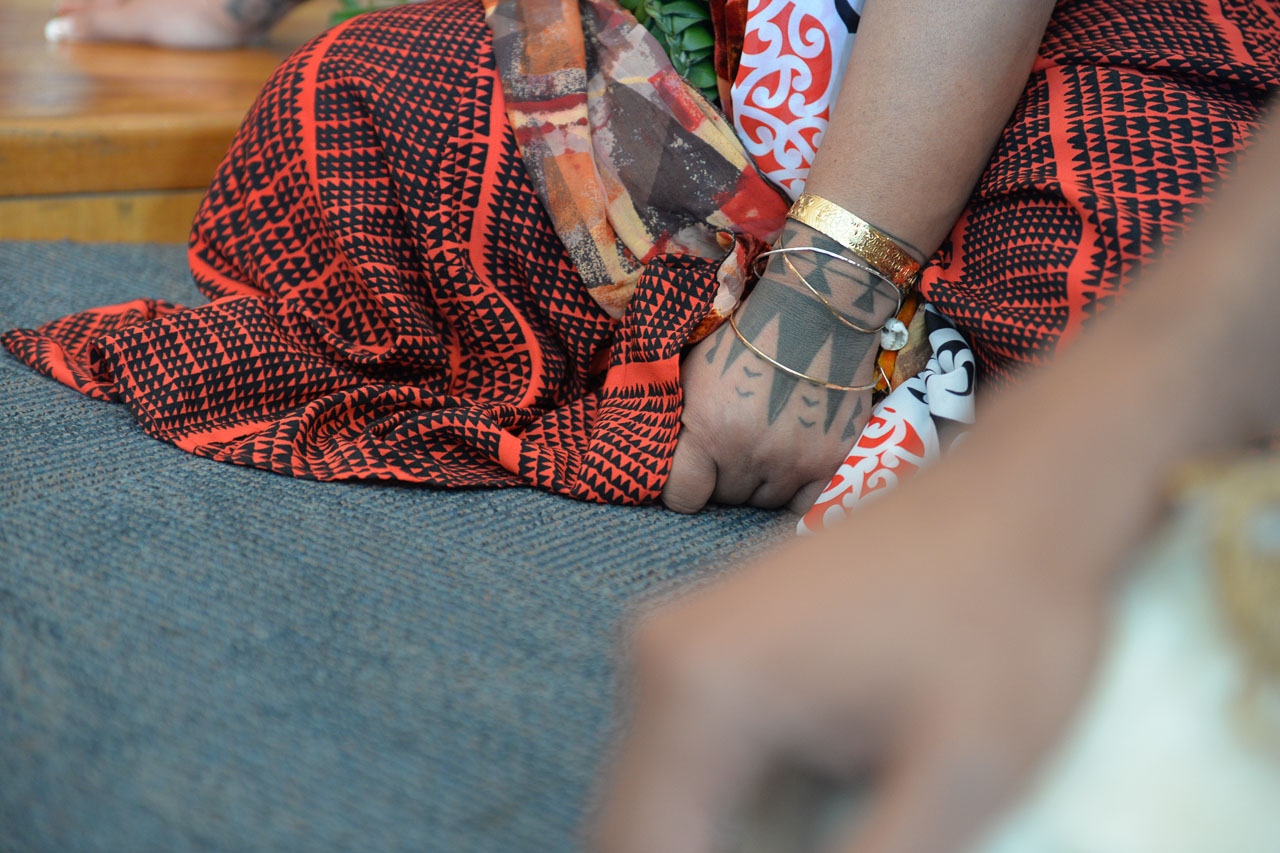 Hope for the future

It’s the fact that culture is finally growing after years of being repressed, and that increasing numbers of native Hawaiians are fighting for it to thrive; it’s seeing taro growing in fields that years ago had gone fallow, and watching children speaking Hawaiian while reading about their past; it’s watching thousands of people rise up against interests fatal to culture; it’s seeing the feathered cloak of a chief — finally back where it belongs.