ON THE MORNING OF APRIL 21, a 150-foot-long section of Rio de Janeiro’s spanking new coastal bike path was lofted into the air by a breaking wave and tossed into the churning ocean below.

Several people plunged onto the rocks and waves below. At least two men died in the accident, their bodies placed on a nearby beach and draped with colorful sarongs in front of a crowd of onlookers.

The deadly accident was just the latest embarrassment for the city that will host the Summer Olympics starting August 5. Not that the shoddy bike path itself will be an official Olympic venue. But the city’s mayor did plan it to be a gleaming Rio Games legacy project. Now, to many locals, its collapse joins a list of problems signaling that Brazil is hardly prepared for this year’s biggest worldwide sporting event. 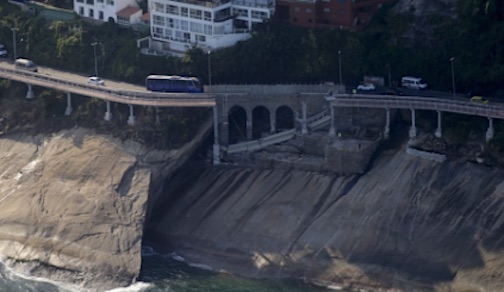 Rio was awarded the games back in 2009, during a period of economic and political optimism that now seems a long way off. In the years since, the country has seen its economy disintegrate, the currency tumble and a shocking slew of scandals practically dismantle the government.

Recently the state didn’t have the cash to pay public workers like firefighters, cops, teachers and doctors, and half a million of them went on strike, shutting down hospitals and schools across the state.

What’s more, a startling investigation by The Associated Press last year revealed that the waters Olympic athletes will swim and boat in are so polluted with human feces and other contaminants that Olympians could risk getting ill. Local officials vowed to clean up the waterways, but they’ve been promising that for years and bodies of water like the Guanabara Bay remain heavily polluted.

A lifeguard in the western Barra da Tijuca neighborhood, home to the Olympic Park, said Rio is woefully unprepared for the event. His name is withheld because he could face disciplinary action for talking to the media.

“This city doesn’t have health care, or education, for its residents,” he said. “I don’t think we’re prepared at all for this.”

Political turmoil, combined with health concerns about Zika and Rio’s filthy water, appear to be having a negative effect on ticket sales for the Olympics. In early April, organizers said they’d only sold 50 percent of tickets for the Olympics and only 12 percent for the Paralympic Games. The government has even raised plans to buy unsold tickets and distribute them to local schools if sales remain low.

The Rio lifeguard said tourists are right to stay away. This city has always been dangerous, he said, but recent cutbacks to public services and the rush-job to finish highly complex infrastructure means visitors are risking their lives.

“I would tell [visitors] not to come here — that they’re running an enormous risk, just like everyone who lives here,” he said. “Not just from the risk of a stray bullet, or the violence, or lack of health care, or because of a construction project that could collapse, but because of the general situation.”

Rio’s politicians are putting a brave face on the current mess.

Mayor Eduardo Cunha addressed reporters a few days after the bike path collapse at a (perhaps poorly timed) press conference to mark 100 days before the opening ceremony of the games. He apologized for the tragedy, but said the city will be ready.

“Sure, we had some problems with the test events, but we’re very sure that preparations are going well for the games,” he told reporters.

In March, the organizing committee said “around 90-95 percent” of the game venues were ready. 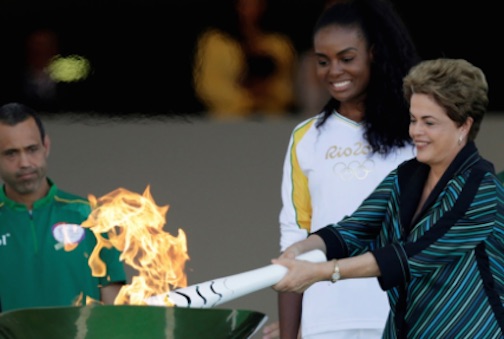 Photo: Brazil’s President Dilma Rousseff lights a cauldron with the Olympic Flame next to Fabiana Claudino, captain of the Brazilian volleyball team, during the torch relay at Planalto Palace in Brasilia, Brazil, on May 3.
GlobalPost / Ueslei Marcelino/Reuters

Much of Barra da Tijuca, however, especially the land around the main Olympic Park, still remains a construction site. Workers are scrambling around-the-clock to finish the bicycle path, which will eventually link the neighborhood with Copacabana and Ipanema beaches, about 10 miles east. That’s on top of other large projects, including a new subway line intended to ease Rio’s infamous traffic jams.

This is nothing new. Olympic cities almost always race to get all their ambitiously promised projects shipshape in time for the opening ceremonies. And remember Brazil’s 2014 World Cup? Massive street protests and construction problems raised serious doubts. And yet, the country pulled off it off.

Rio may well still present a glittering spectacle to the world in August.

President Dilma Rousseff, who faces impeachment, last month said preparations were “even a little ahead of schedule” and recently promised “the most successful Olympic Games in history.”

For the world to see

Even if the games go smoothly, Rio will likely wake up the morning after facing the problems it faces today. Barring a remarkable economic turnaround, Rio de Janeiro state, which relies largely on revenues from Brazil’s embattled oil industry, will probably still be struggling to pay its bills.

For many “Cariocas,” as Rio locals are known, the Olympics have become a modern-day version of an old phenomenon they call “para os inglês ver,” meaning “for the English to see.”

The expression traces back to 1831, when Brazil signed a treaty with Britain promising to end slavery. In fact, slavery continued here for more than 50 years. The treaty was widely considered to be a sham — “for the English to see.”

Theresa Williamson, who runs Catalytic Communities, a local nonprofit that advocates for marginalized communities, explained how the expression has taken on new meaning in 2016.

“Today, é para inglês ver refers to policies or awards or marketing where the city is simply trying to look good to a foreign audience,” she said. “But that in reality, the thing that’s being implemented on the ground is either not being implemented or not being maintained or doing a disservice to the city.”

In the days following the deadly collapse, investigators found that it had not been designed to withstand ocean waves — despite hanging off a cliff that’s routinely pounded by large swells. The path looked great, but it was fundamentally flawed.

Now, engineers are searching for a solution so it can be used going forward.

Finding solutions for the rest of Rio’s problems will be far less simple.

by Will Carless, GlobalPost
This article is syndicated from GlobalPost.