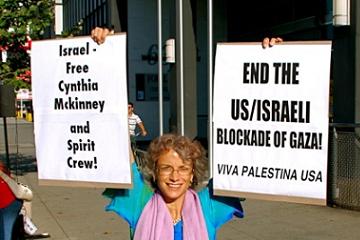 Israel issued a statement saying that the boat had attempted to break the blockade of Gaza and therefore seized it after the crew ignored a radio warning to stay out of Gaza waters. Israel’s purpose was to stop the ship because of “security risks in the area.” It views the group’s campaign as propaganda against Israel.

Israel seized the boat, its cargo, and the crew’s cell phones, then imprisoned the crew in Israel. On board the ship were citizens from many countries, including Britain, Ireland, Bahrain, and the United States. Former U.S. Congresswoman Cynthia McKinney, Irish Nobel Peace Prize Laureate Mairead Maguire, a Palestinian-American lawyer, and many journalists were among the crew. In total 21 people are being detained in a prison in Ramla, Israel. Ironically, the crew has been charged with illegally entering Israel when they had no intention of entering Israel.

“They simply kidnapped the passengers,” Free Gaza Movement founding member Greta Berlin told Ynet news, an online publication based in Israel. “I call on the Israeli occupation forces to release our people immediately. It’s funny. What are they going to do? Deport us? The last place we wanted to reach was Israel.”

All detainees were unarmed civilians.

They were carrying food, medicine, olive trees, and children’s toys for people in Gaza.

This was the eighth journey of the Free Gaza Movement and it is not their first encounter with the Israeli Navy. When their ship attempted to deliver medical aid following Israel’s 22-day attack on Gaza this last winter, Israeli gunboats rammed it and wrecked the ship.

Gaza has been subjected to a crippling blockade for two years. The movement of people and goods in and out of Gaza has been severely restricted. Since last winter’s assault by Israel, the people of Gaza face even more severe shortages of medicine, food, and materials that are necessary for rebuilding schools and homes.

During his recent speech in Cairo, President Obama stated that the continuing humanitarian crisis in Gaza is unacceptable, that it devastates families and does not serve Israel’s security.

Reuters reported on Thursday that Richard Falk, the United Nations special rapporteur on human rights in the Palestinian territories, said the seizure of the ship and crew was part of Israel’s “cruel blockade of the entire Palestinian population of Gaza” in violation of the Fourth Geneva Convention prohibiting any form of collective punishment against “an occupied people.” Such a pattern of continuing blockade under these conditions amounts to such a serious violation of the Geneva Convention as to constitute a continuing crime against humanity.

This event will perhaps shine a spotlight on the situation in Gaza. It also raises the questions of how other humanitarian missions will be received. As I wrote last month on MatadorChange, the Viva Palestina convoy departs on July 4 for Egypt to bring much needed aid and supplies to the people of Gaza.

We will be closely following the story of the detained crew of Spirit of Humanity and the Viva Palestina convoy throughout July.