Anyone reasonably confident in the water can enjoy the relaxing, sometimes exhilarating, activity of snorkeling. Unlike diving, snorkeling doesn’t require you to do extensive training or pass a test to earn a certification. Whether you have an inner ear problem or another issue, or just haven’t had the time to get certified, snorkeling is an alternative way to explore hidden underwater worlds – without the heavy gear or the scary thought of running out of air.

If you’re at a pristine beach, sometimes just putting on a mask, snorkel, and fins is the only way to closely approach marine life. Just floating face down on the surface can reveal a world of incredible beauty. In others places, snorkelers can get the rush of encountering such awesome marine creatures as whales and manta rays. Here are some of our favorites. 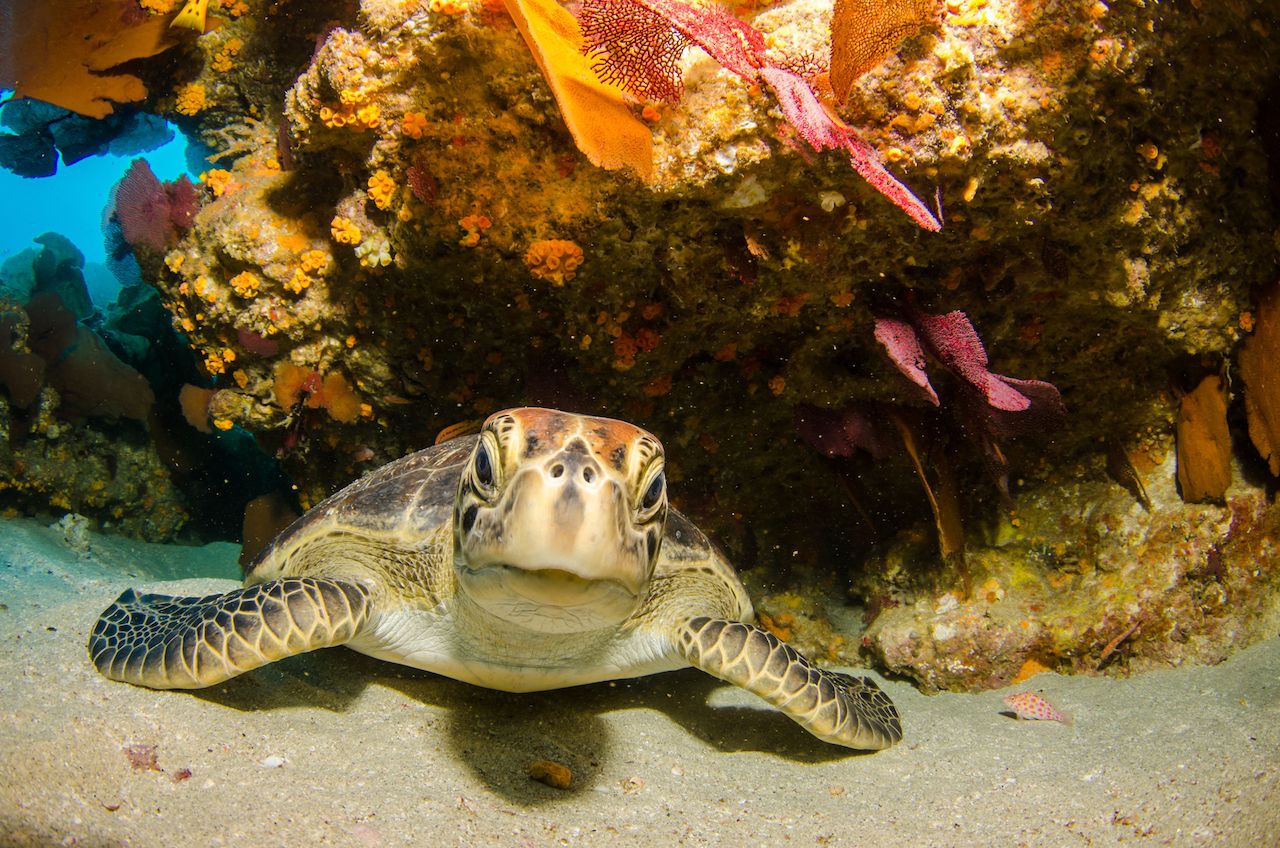 A World Heritage site, the Sea of Cortez is one of the planet’s most diverse marine environments. Also known as the Gulf of California, the narrow ocean channel separates the Baja Peninsula from Mexico’s mainland. It’s a key breeding ground for marine mammal, and more species of whales and dolphins have been recorded here than anywhere else. Commercial fishing has taken its toll, but the 2009 establishment of Cabo Pulmo Marine Park revitalized local wildlife populations within a few years.

Baja’s cactus-strewn desert coasts are the backdrop for endless miles of tranquil sandy bays and shallow reefs. Aside from Cabo Pulmo, with its schools of tornadoing jacks, the islets off La Paz are home to a large colony of California sea lions. These feisty critters are only too happy to show off to visitors with their zooming acrobatics and cheeky antics. For hardcore adventurers, ecotourism outfit Pelagic Life offer multi-day trips from La Paz searching for whales, orcas, sharks, and mobula rays. 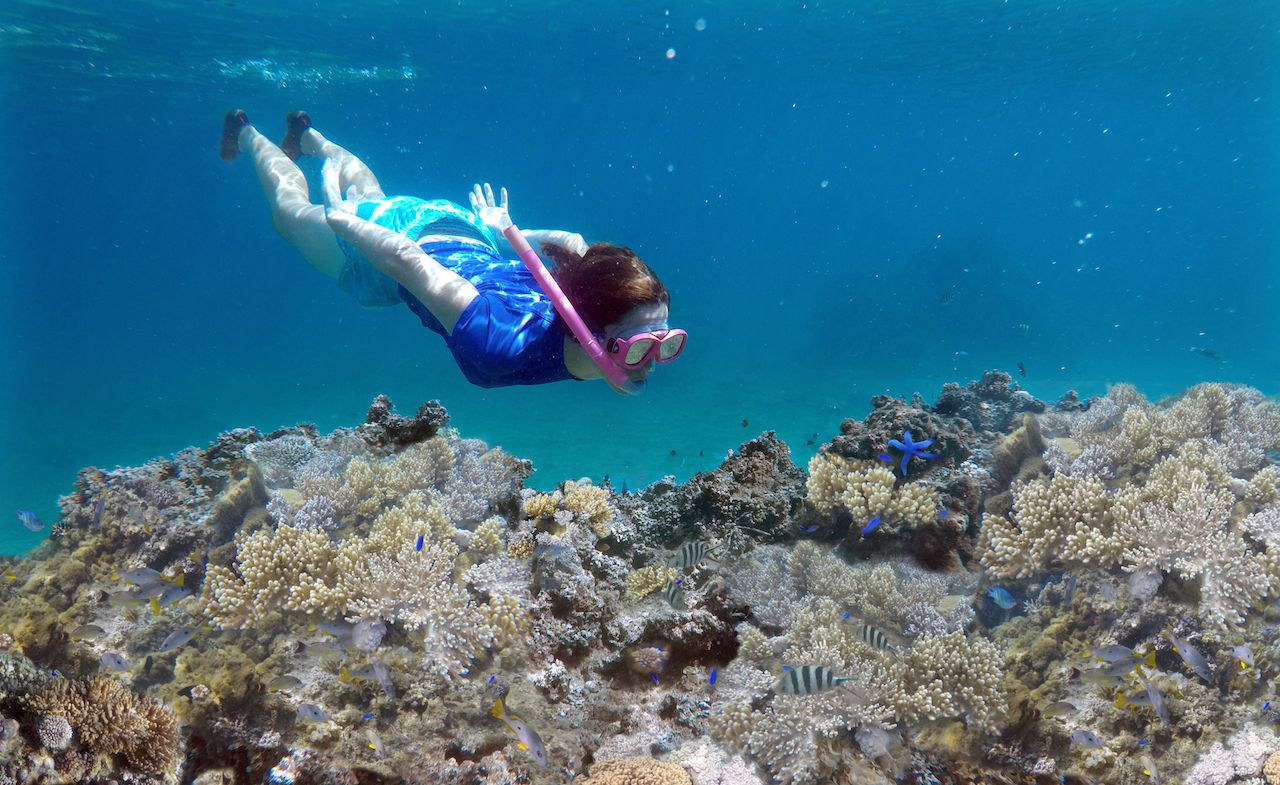 Encircling Fiji’s fourth largest island, Kadavu, the Great Astrolabe Reef makes up one of the largest barrier reefs on earth.

Staying in a waterfront Kadavu resort, epic snorkeling is possible right off the beach. More adventurous trips take place on the current-swept outer reef, where you can search for the marlin, tuna, and trevally that patrol the sheer vertical walls along the reef’s edge. Fiji is the world’s soft coral capital, and Astrolabe’s underwater gardens are a vivid display of fluorescent pinks, violets, blues, and greens. Shimmering schools of small fish turn at once in a brilliant, unified flash, should a snorkeler attempt to dive down among them. 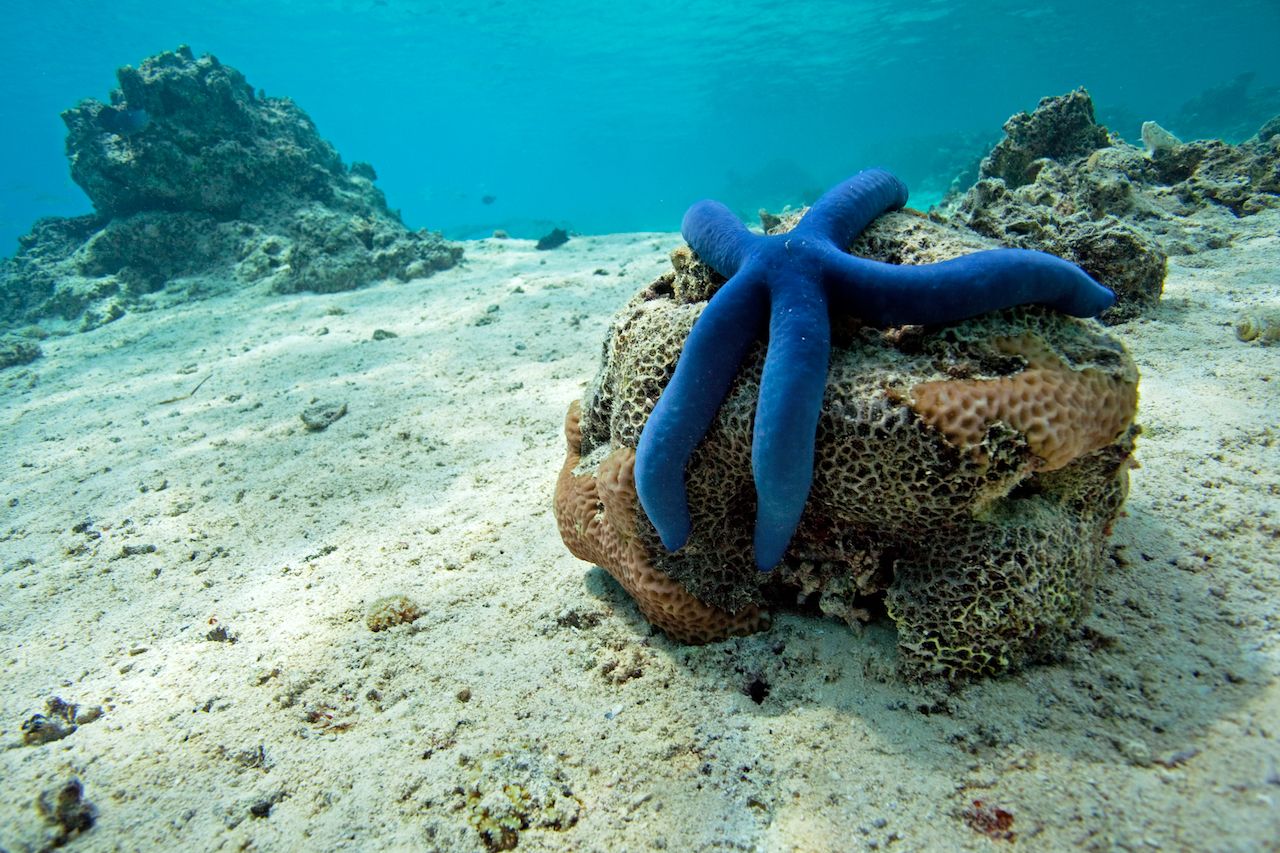 If you’ve ever wondered what it would be like to swim side-by-side with one of the ocean’s largest and most emotionally advanced inhabitants, make it your mission to meet the humpback whales of Tonga’s Vava’u island group.

The 60 islands of Vava’u form a network of secluded bays where the whales, after an exhausting migration from their Antarctic feeding grounds, stop to give birth, rest, and play. Tonga is one of the few places that permits swimming with humpback whales. Only four people are allowed in the water at a time, ensuring intimate, eye-level encounters with these gentle giants. Snorkelers have the chance of a life-changing interaction with the curious calves, as their mothers watch over them with an apparent mix of pride and protectiveness. 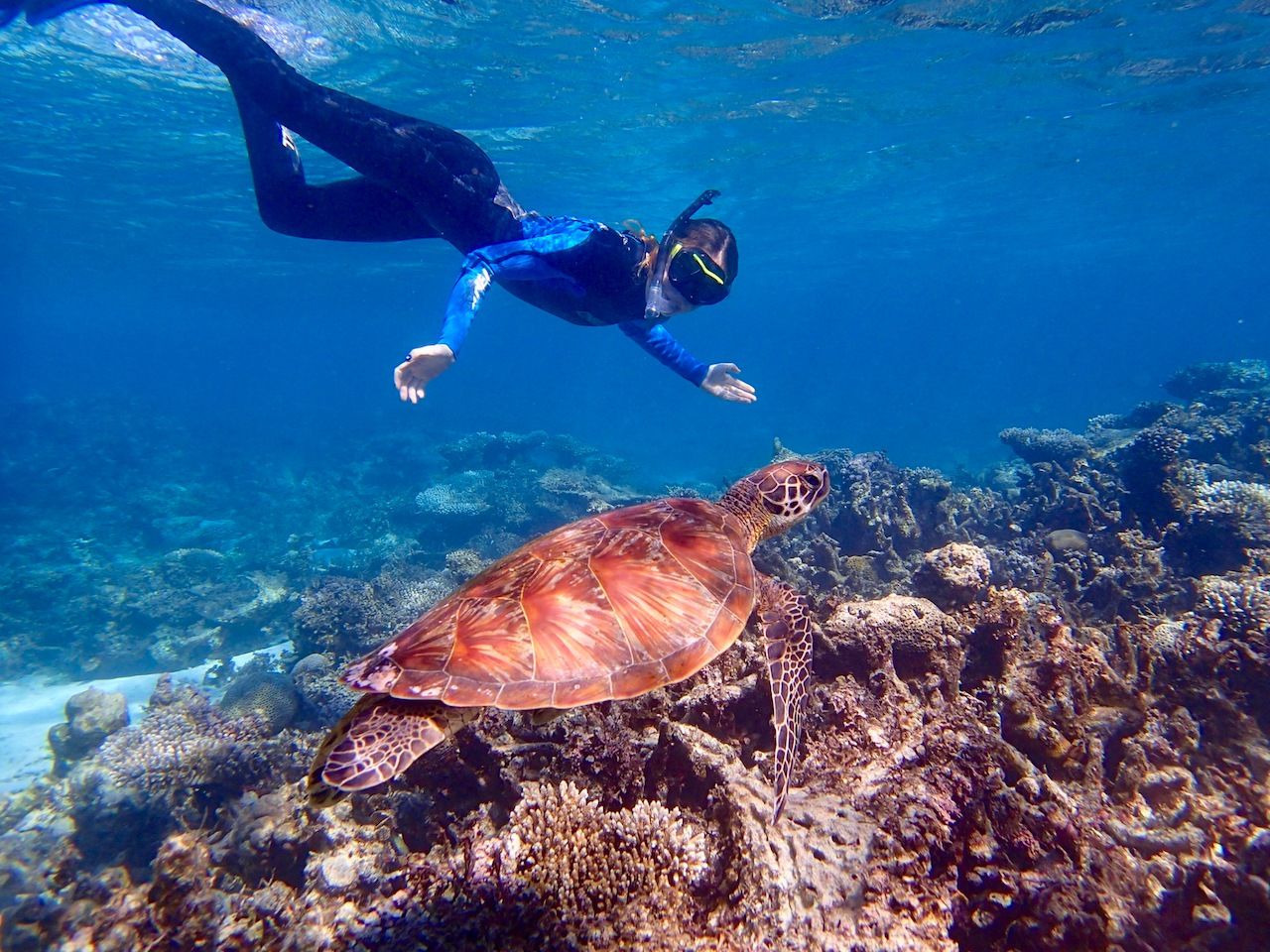 1,200km from Perth, along Western Australia’s Coral Coast, Ningaloo Reef isn’t the easiest or cheapest place to reach, but its remoteness provides the possibility to explore world-class tropical reefs, often without a single other snorkeler in site.

Most tourists only arrive during the April to September whale shark season. Whale shark expedition boats are accompanied by spotter planes, so getting in the water with the world’s biggest fish is almost guaranteed. It’s humbling to be so close to these huge animals in their own domain. With a 4WD vehicle you can also access the untouched reefs along Ningaloo’s rugged coastline, home to manta rays, reef sharks, turtles, dolphins, and even the shy, endangered dugong. 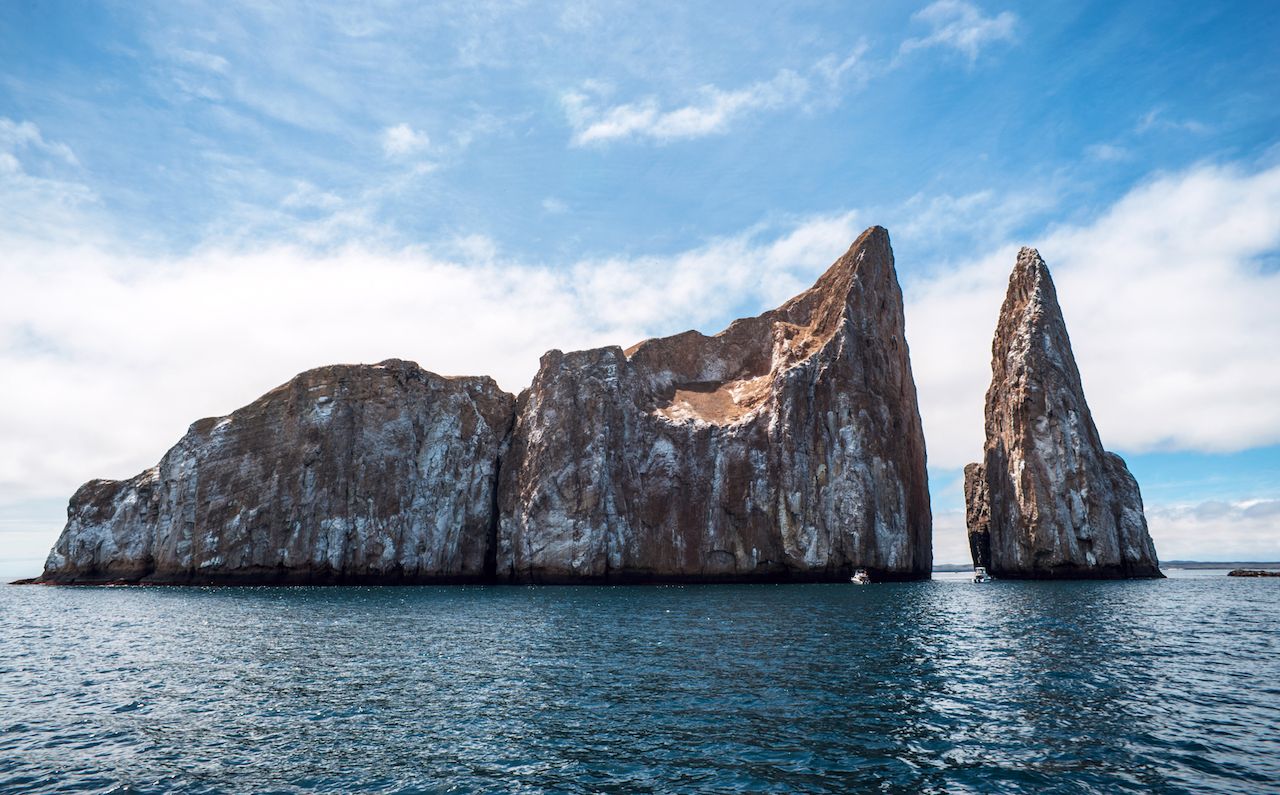 A two-hour boat excursion from San Cristobal Island, Kicker Rock is in fact the remnants of an extinct volcano cone – now a dramatic basalt monolith towering 500 feet above the Pacific Ocean.

The Galapagos have plenty of incredible snorkeling spots, but Kicker Rock ranks with the best. It’s one of the few areas accessible by day-trip where the archipelago’s famous hammerheads school in relatively shallow waters. Kicker Rock’s abundance of large animals make for a surreal, underwater safari-style experience. Even if the hammerheads don’t make an appearance, you’re likely to come across Galapagos sharks, white spotted eagle rays, massive turtles, and the occasional friendly sea lion. 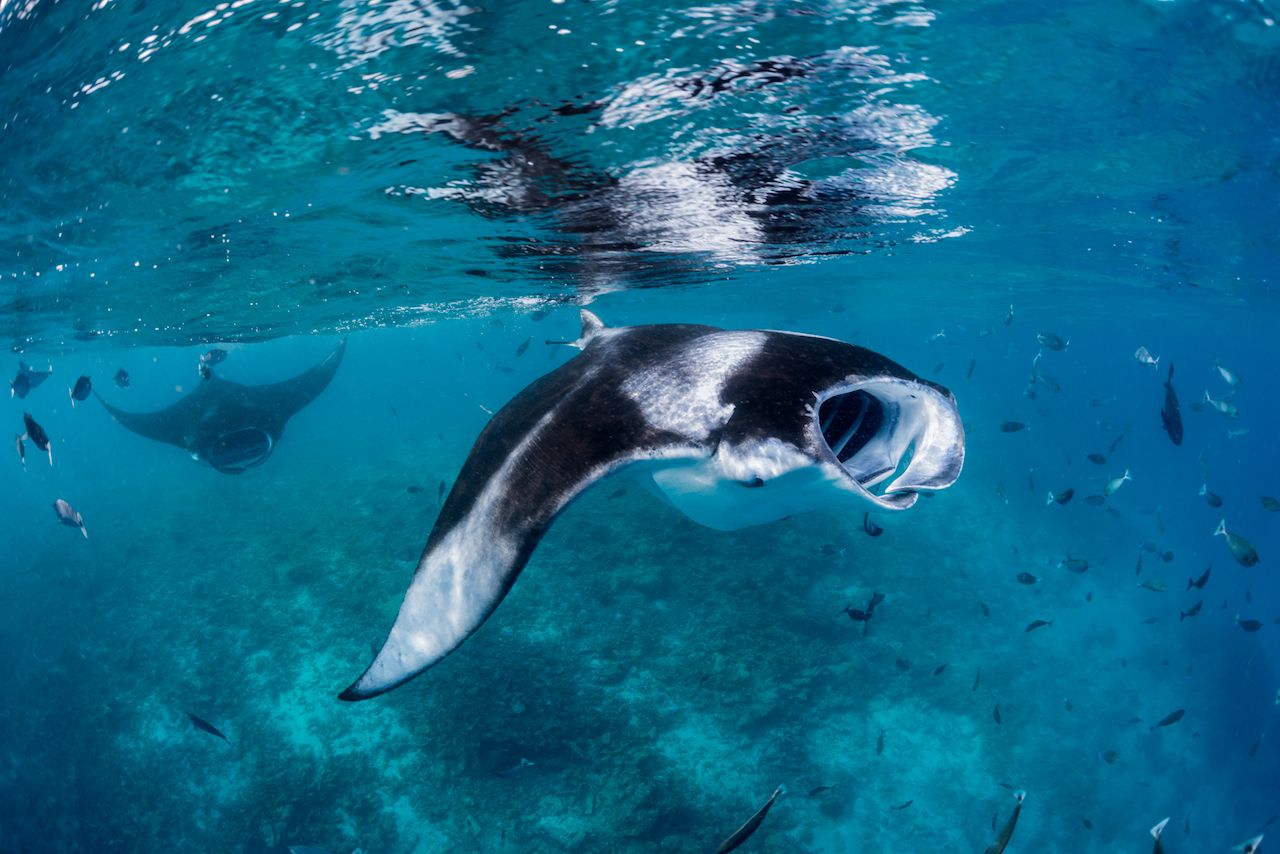 Possibly the best place in the world to get up close with manta rays in mind-boggling numbers is the Maldive’s Hanifaru Bay. Its crystal clear tropical waters become a veritable buffet for the plankton-eating giants between May and December each year.

You might see 200 mantas at a time. In a spectacular ‘cyclone feeding’ event, mantas fly together in formation and perform barrel rolls with mouths wide open, sucking in their microscopic meals. These huge, majestic, and intelligent beings are social and curious by nature, often approaching awe-struck humans at close range seemingly just to get an eyeful. 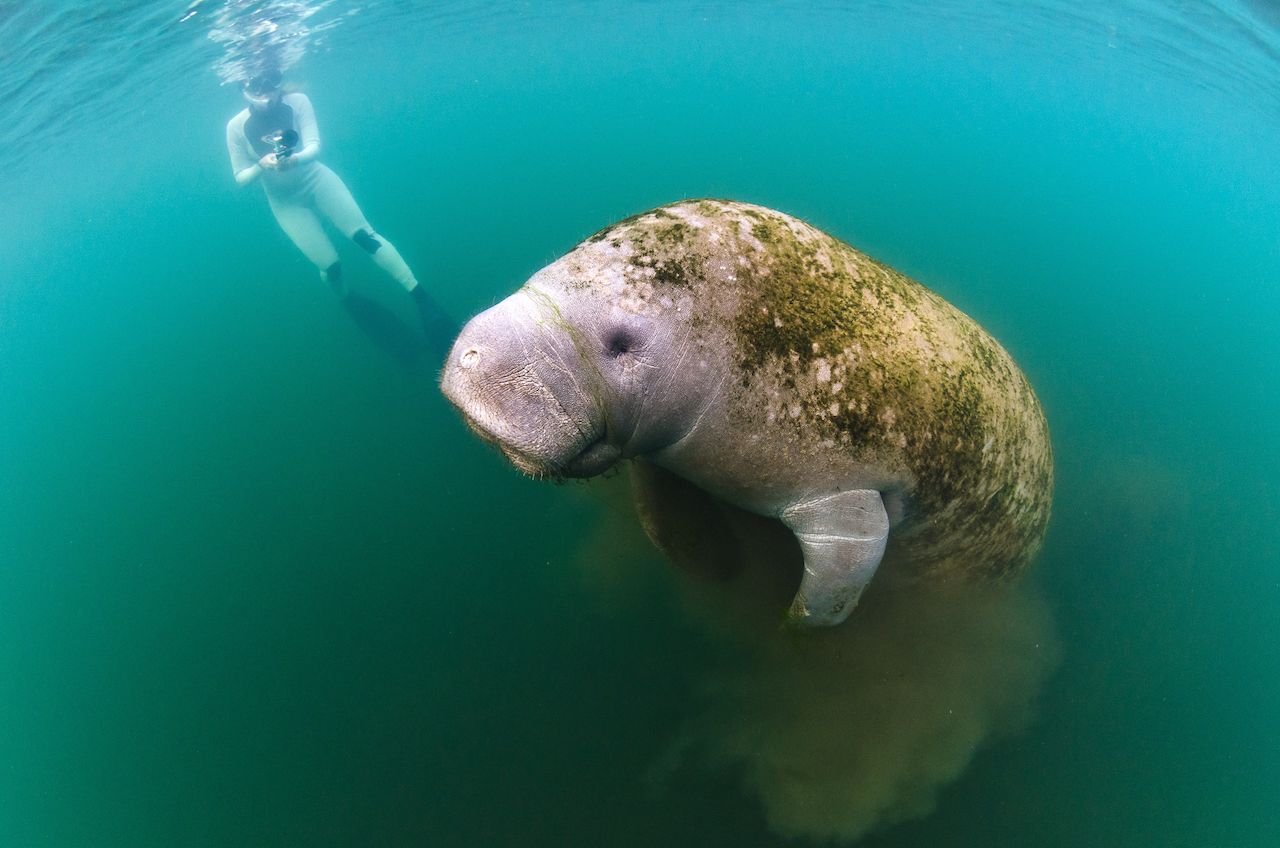 There’s something mesmerizing about close encounters with marine mammals. They’re intelligent and charismatic, and often appear as fascinated with us as we are of them. One of the most enigmatic marine mammals is the manatee, a gentle, slow moving sea-grass eater weighing up to 1,200 pounds.

Florida’s Crystal River is the only place in the US where swimming with endangered manatees is legal. Guided encounters take place in cool, spring-fed estuaries that offer refuge for the world’s largest manatee population. Pontoon boats navigate the river’s twists and turns looking for manatees grazing the shallow river bottom. Once in the water, you should keep as still as possible. Eventually the manatees’ curiosity will overrule their shyness and they’ll often approach snorkelers, face to whiskery face. Despite their size, manatees are incredibly endearing, making meeting them in the wild a quietly thrilling experience. 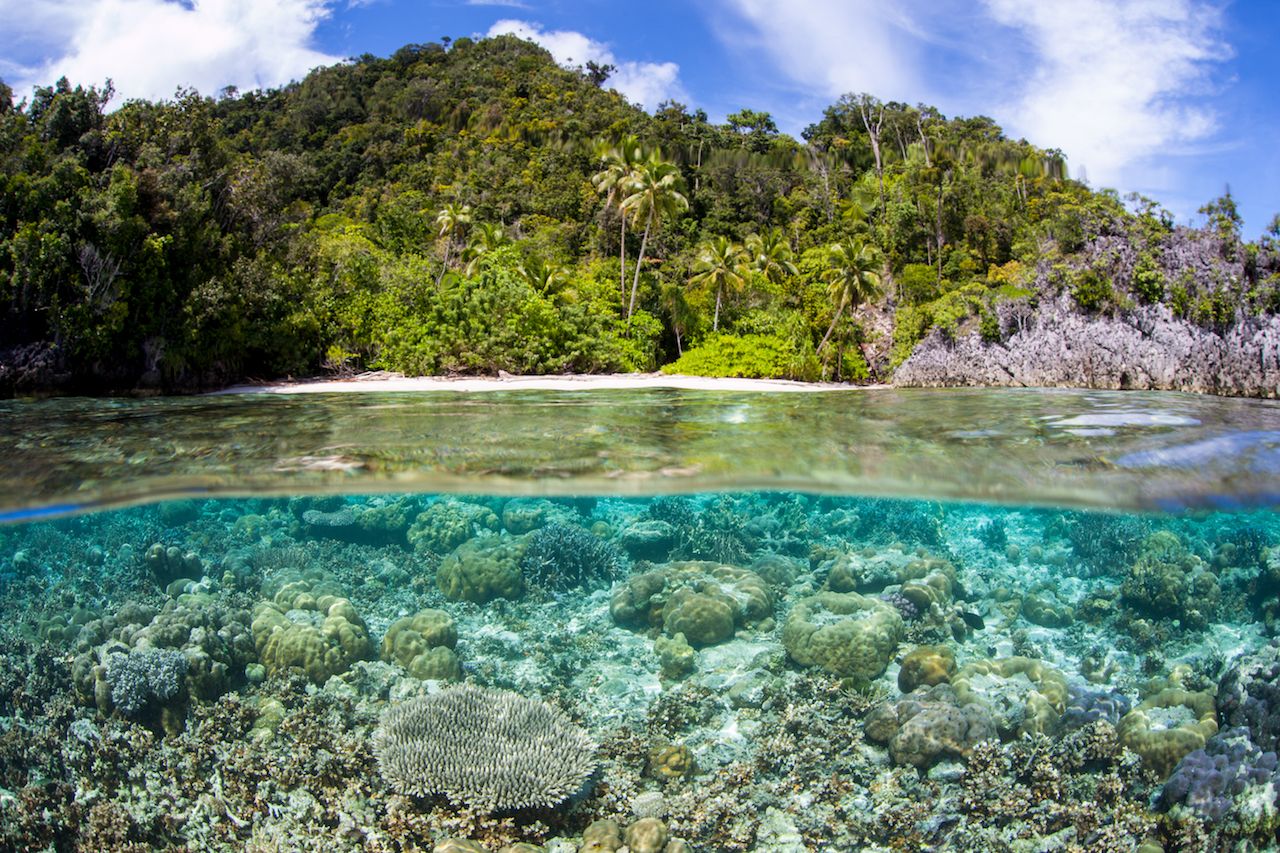 The Pacific Ocean’s Coral Triangle is the epicenter of marine biodiversity. Here, the 1,500 islands of Raja Ampat make up Indonesia’s premier diving destination. Most islands are uninhabited, covered in lush jungle. Misool Island has a scattering of small villages and most of Raja’s land-based accommodation. There are a couple of homestay options for travelers on a budget, but Misool Eco Resort is Raja’s most luxurious, eco-conscious retreat.

Misool’s villas are on stilts over a dazzling turquoise lagoon, creating a snorkeler’s paradise at the doorstep. Wake up and explore the lagoon and house reef, which is one the world’s richest shore dives. Pristine hard corals grow right up to the surface, buzzing with swarms of flitting fusiliers, parrotfish, turtles, and octopus. You may even spot the tiny, adorable epaulette, or ‘walking’ shark, casually strolling along the reef at low tide. The lagoon is a sanctuary for a local population of baby black tip reef sharks. 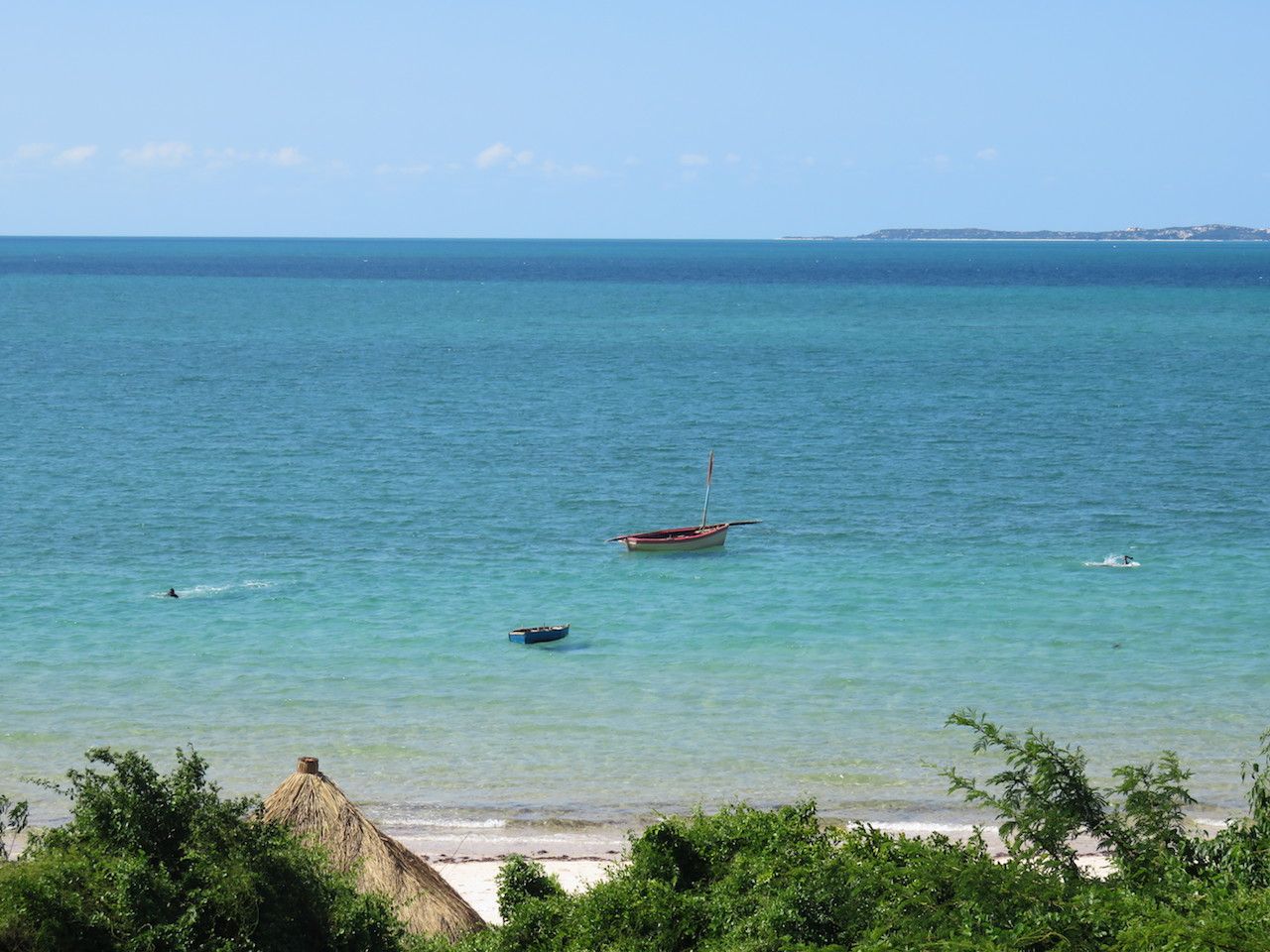 Despite being a popular winter retreat for South Africans, Mozambique isn’t well known on the international dive scene. Yet the country has the longest stretch of Indian Ocean coastline in Africa, with miles of unexplored, often unnamed beaches and Africa’s best tropical diving and snorkeling. 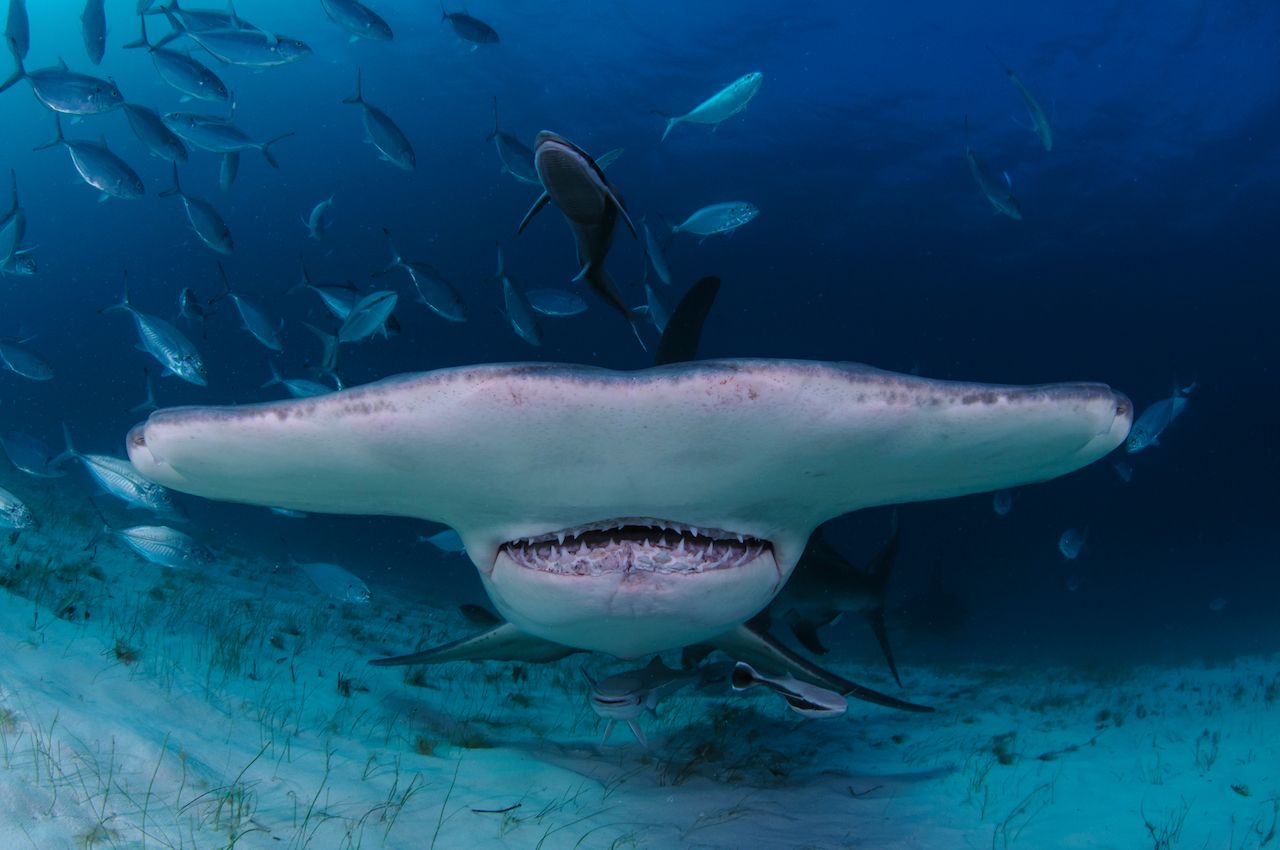 The Bahamas are undoubtedly the top spot in the Caribbean for big fish encounters, which have sadly become rare elsewhere in the region. The enlightened Bahamian government managed to preserve big fish populations, placing a ban on shark fishing and on the sale and export of shark products, focusing instead on sustainable shark tourism.

Shark geeks should head to the Bimini islands for adrenaline-pumping free swimming with Caribbean reef and other shark species in amazing visibility. If you’re a shark-phobe wanting to face your fears, experiences like this can completely change your perspective. Fear will give way to admiration for these graceful predators with an unfortunate image problem.

DivingHow To Go SCUBA Diving Without Being Certified
Tagged
Diving Outdoor Insider Guides
What did you think of this story?
Meh
Good
Awesome