THE BLUNT TRUTH is that most people are clueless in nature. Stop by any campground and you’ll see it: People sitting around coughing, literally smoking themselves out with improperly made fires, or struggling to get a fire going at all (“Man, just squirt more lighter fluid on it!”), or hitting ridiculously out-of-scale trees with hatchets as if they could actually chop them down (and as if, once they did, a massive trunk of green wood could actually work as firewood).

Or they’ll have so much gear, it’s as if they’re still inside. From RVs named “The Intruder” to tents so supersized it’s as if they’re camping in their living room, this translates into a disconnection from the place, as their flip-flops slap in trips to and from the bathroom, yelling to one another, oblivious to what’s going on all around them: an approaching storm, a late-night overpass of a Great Blue Heron, the trajectories of the moon and stars, the herd of deer down by the river at first light.

Still, no experience is inherently “better” than another. If people want to stay in RVs watching TV while camping, that’s cool. But as we only have a limited time to choose what we pay attention to, and as learning to pay attention in nature is a progression, a series of “firsts” that never truly ends, here are a few suggestions on getting started, whether it’s with friends, kids, or just alone.

1. Going to the bathroom

People’s comfort level — including their need to relieve themselves — always comes first. Some small children may even be afraid or troubled by the fact that “there’s no potty.” One of your first lessons taking inexperienced people in nature is reassuring them that everything’s cool re: “the bathroom.” Explain how to dig a a cat-hole or latrine. If it’s forested terrain, the root buttresses of trees — where leaves and detritus collect — often make for soft, easy digging. Using the model of how a cat covers up its waste is always helpful. Bring hand sanitizer and toilet paper. Make it available to everyone in discreet ways. Go do your business.

When teaching outdoor education in Colorado, one of my favorite activities was a backcountry “ramble.” Basically we’d park the van at the foot of a small mountain or valley, study its contours — first the features themselves, then on a topo map — and then begin traversing it, always staying within eyesight of each other but each of us finding our own “line.”

We’d play games along the way, such as “don’t touch the ground” (stepping from rock to rock when the terrain was boulder-strewn), or doing “silent walks” (remaining quiet for intervals, then regrouping and discussing what we’d observed). I’d keep one eye on my compass or choose areas I simply knew by heart. We’d avoid any official trails and instead find our own way among the strange crisscrossed networks of now-overgrown logging roads, animal paths, ledges, caves, doghair ponderosa forests, wetlands, meadows, long-abandoned camps, century-old ghost mines, circles in the grass where elks had bedded down that morning.

Simply stepping off the trail is a profound act in that it forces you to move differently, to yield to the terrain instead of tromping through it. It also mandates responsibility: Many places such as wetlands and alpine tundra are fragile and easily impacted. The idea is never to make a new trail, but move through leaving no trace. In general, find a forested area that you know well and which has a natural boundary such as a river. Talk about how animals move through the forest (constantly alert, observing, careful). Step off the trail and see what you find.

Too many people approach the woods with the default rule of “keep your feet dry.” But an important way to expand your comfort level as well as your understanding of a terrain is to not be afraid of fording creeks and rivers (or simply exploring them), even in the winter time. It’s impossible not to laugh doing this together as a group.

Make sure you use a pair of river sandals, ideally close-toed. You can leave boots on the bank (recommended) or strap them to your pack. Use a walking stick. Above all, make sure you’re starting out in a benign place. Even shin-deep water can completely pull you under if it’s moving fast enough. The goal shouldn’t be crossing the river as a stunt, but simply exploring different areas of the terrain, working together as a team. Lock arms and work with one another, helping each other move across, or upstream / downstream. Plan out your “line” ahead of time. And while you’re midstream, take time to turn over a few rocks. What do you see under there?

An extension of the above: One of the rawest and oftentimes most hilarious experiences in nature is simply swimming or taking a quick plunge in whatever water is there, whatever time of year it is.

Most of us have grown up with a false sense of what’s “permissible.” But if you allow them to, kids will test out the water any time of the year, virtually anywhere. They still have that innate curiosity we as adults tend to lose over time. Follow it. If necessary, build a fire beforehand and have it roaring when you get back from your icy plunge. It’s impossible not to feel better afterwards, almost as if you were “coated by” the place, even hours afterwards. You’ll never have this feeling if you stay dry.

Most of us are asleep and tucked in safe at night, when it’s “business hour” for so much of the forest. A night hike allows you a small look inside this other world. If children are afraid of the dark, this shouldn’t be looked at as some kind of ordeal or challenge to their fear level, but possibly a game or objective. It helps to have certain features or natural occurrences (fireflies, meteor showers, bioluminescent fungi / algae) as a kind of “goal” for the hike. But you can always just make one up: “The moonlight is going to look beautiful at the big pine!”

Generally, if you can explain the concept of night vision, choose a walk where there’s plenty of moonlight, keep the headlamps off, and make sure people are comfortable, this will give them an exciting awareness of how they too have “animal powers.”

6. Identifying your first trees and plants

Understanding the botany of a place is foundational not just in giving you more familiarity with the terrain, but in how it teaches you to observe things more closely. Forget apps. Invest in a high-quality tree and plant guide such as the ones published by the Audubon Society. You can store leaf samples between the pages. Bring a magnifying glass.

One of the most magical things about identifying trees is that once you really begin to recognize a certain species, Sweetgum for example, they suddenly transform the landscape, becoming familiar landmarks “popping out” of a place where before you’d only seen abstract “woods.” This is the essential first step in paying attention.

An extension of the above, discovering the food or medicinal value of plants is a way of “interacting” with them, and fixing them in your memory for the rest of your life. Obviously take precaution: Never ingest tree or plant material you haven’t 100% identified. But that said, it’s incredible the amount of wild edibles right in people’s lawns and around our neighborhoods. Learning where these foods are and when they can be harvested can make for fun annual “missions” to certain spots, such as the blueberry groves in southern Appalachia.

One of the most incredible things about the natural world is how much of its activity occurs just beyond our perception. The movement of animals through the woods behind our houses each night. The bats asleep — hanging from trees we walk by each day — without our noticing. The creatures burrowed in logs and rocks and dens just beneath our feet. Tracking is a way of “reading” the passage of activity in a particular terrain. It can be as simple as choosing a 20ft² section of land and studying every square inch of it.

The mistake is thinking there must be “big “discoveries. Kids are naturally tuned in to the promise of seeing something unexpected, whatever it may be, the kind of vision that can pick out the smallest traces and signs: a cicada shell, a larva, a deer track. Choose patches of land where there are animal trails, or along creeks or riverbanks. Another trick is to take a small clear square of plastic, position it over a patch of meadow, then have everyone push it down along the edges. Observe the insects that begin to jump around beneath it. Ask questions about how much life is in there that you don’t normally see.

Tracking can go to a whole different level when you’re out on the snow. No matter what, just make sure you have something glidable with you, whether a board, skis, sled, or trashcan lid. It doesn’t have to all be about going on a “ski vacation.” It’s just about getting out of town when it snows and seeing how the woods transform.

Paddling, particularly whitewater paddling, is a long and beautiful progression that can start very early simply with a canoe. Although rafts and duckies make it easier to get groups on the water, there’s nothing like putting your son or daughter in the bow of the canoe and then paddling from the stern to teach them the leans, strokes, and dynamics of being on moving water.

Similarly, surfing is a lifelong progression, and possibly the only activity on Earth where you can be right in the city, but as soon as you paddle out, you’re most definitely in nature. 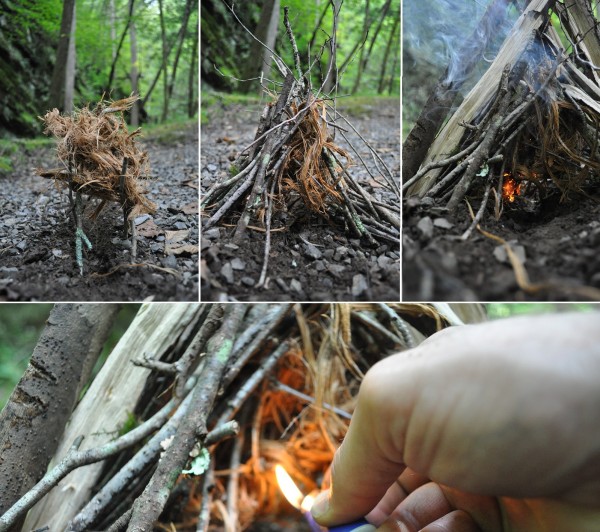 One’s first fire in the woods commands attention like no other activity. There’s something primordial and fascinating about it. Fire-building also reflects your approach to being in nature. It’s an opportunity to show people, especially children, not just the hard skills of building a pyre or splitting wood or gathering tender, but the whole way you go about being in the woods: where you look for firewood, how you go about gathering it.

If you’re not already an expert at building fires, it’s a great skill to learn with your kids. Take classes at wilderness schools, etc.

One of the greatest joys of truly camping outside in nature, not just sleeping in a vehicle, but having to pitch a tent, carry in food, set up a kitchen, maintain cleanliness without sinks or trashcans, is that it forces you to improvise and be creative, to use what you have available. These can be opportunities for learning, teachable moments at every turn. Often kids can have some of the most creative solutions, inventing their own utensils, plates, “tables.”

Certainly gear is an important part, and a bomber tent that’s already been seam sealed, plus comfortable sleeping pads and warm enough bags are essential. But equally as important are where you choose to go and your expectations (or lack thereof) regarding activities. All of the first experiences listed up until now can be looked at as possibilities for this first camping trip, or as their own standalone activities. The point isn’t to check them off a list, but to look at each one as its own line of investigation, its own progression. Have fun out there.

OutdoorWhy Solo Adventures in Nature Make You Stronger
Tagged
Travel Nature Valley: The Nature Project
What did you think of this story?
Meh
Good
Awesome
✖
travelstoke
Download the mobile app
stoked by