Along Croatia’s Adriatic coast, Dubrovnik is a 13th-century city reborn thanks to extensive renovation after earthquakes and wars took their toll. Caught in the fame of Game of Thrones, the town drew well over one million tourists in 2019. The city’s old town is a UNESCO World Heritage site recognized for the historic preservation of its winding limestone streets, elegant baroque architecture, and terracotta rooftop houses. The most famous of Croatia’s cities is also home to top-notch seafood restaurants and boat tours to nearby islands. But the most overlooked aspect of the city is its easy access to the cross-border multiculturalism that the Balkans are known for.

To experience a cross-section of the Balkans’ history, cuisine, and breathtaking architecture, hit the road along Croatia’s sun-drenched coast to the neighboring countries on a day trip from Dubrovnik. 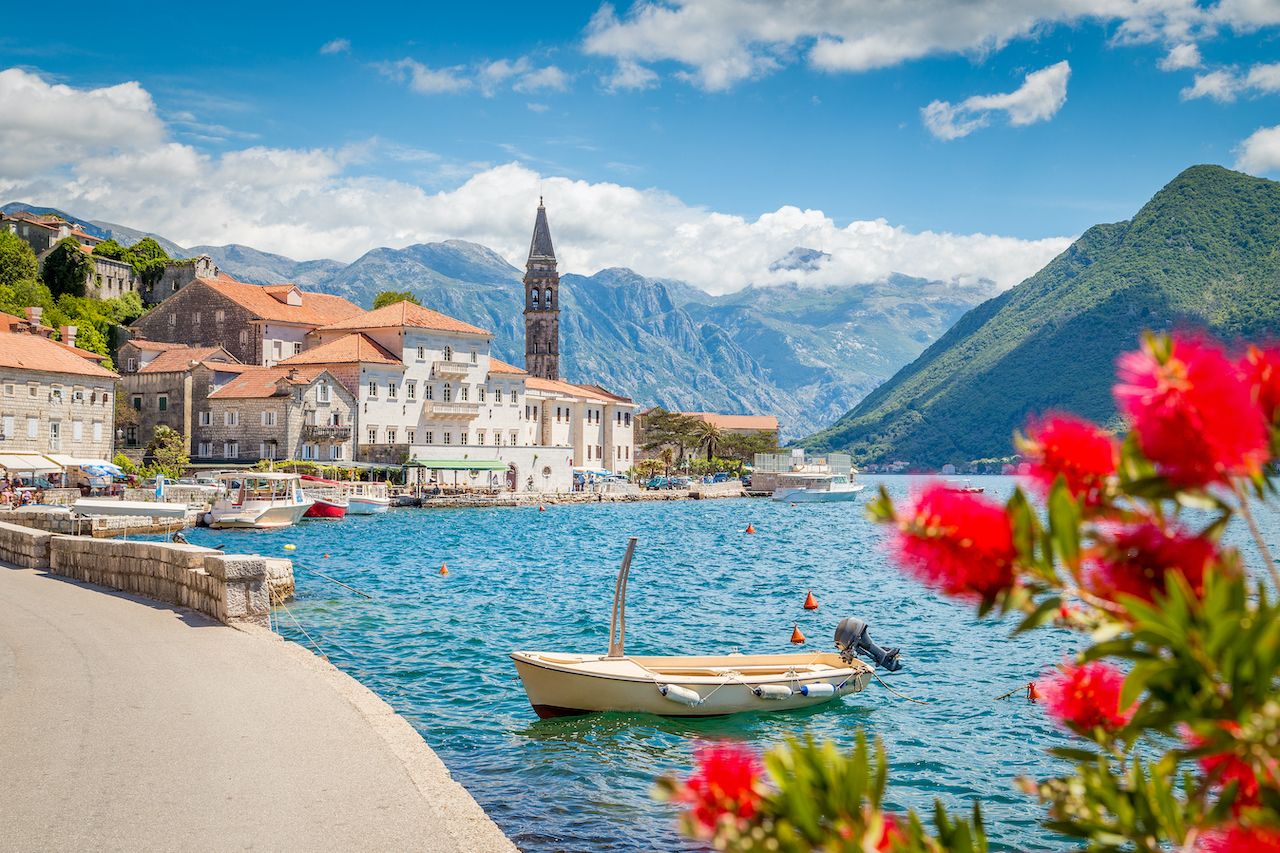 It takes 3.5 hours to reach Montenegro by road, though border crossings during the summer season can stretch to five hours. Push along the scenic highway E65, with its narrow hairpin bends and the craggy mountains of Montenegro on one side. The name “Montenegro” is said to come from 15th-Century Venetian lords, who saw the surrounding dense pine forests as giant black mountains.

The ride to Kotor Bay cuts through these narrow mountains, but you’ll get glimpses of the medieval villages located on the water during the drive. The medieval walled town of Kotor is a maze of cobbled alleyways, piazzas, cafes, jazz clubs, and tiny boutiques squeezed into lanes. The most impressive landmark is the Catholic church, a mastery of baroque-romanesque architecture, and you can also spot remains of Byzantine-style frescoes on the arches.

Park your car near the Marina Bonići, and hop on a boat ride across the Bay of Kotor to take in the views from offshore, a fresh perspective on the landscape you drove through. Afterward, head to villages including Perast Tivat, and if you’re up for a 90-minute drive, continue further to Ulcinj and Sveti Stefan. Each is a historic walled town with impressive churches, former grand palazzi, and piazzas studded with cafes and souvenir stores. Stay for an al fresco meal to experience how the architecture and culinary cultures sway towards Italian taste. Don’t leave Montenegro without hitting the beachside town of Budva. This is your chance to lounge on a beach sunbed, backed by fortress walls and citadel views, savoring Montenegrin Vranac wines and jazz. 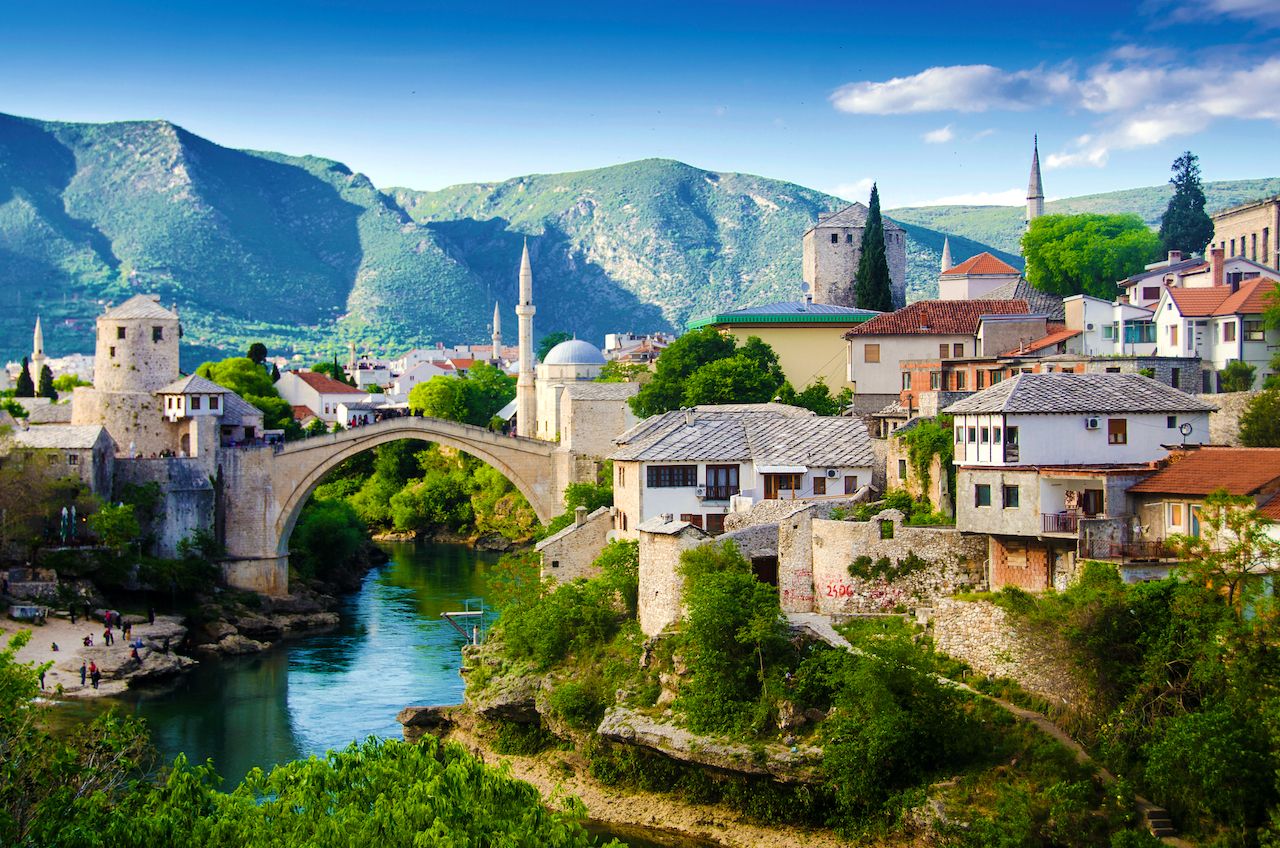 Mostar, in Bosnia and Herzegovina, is approximately a four hours’ drive north from Dubrovnik. On crossing over to the Bosnian countryside, riding on Highway M6 fringed on both sides with rugged mountains, you’ll spot Bosnian-style stone houses rimmed in wooden lattice works. Pull off the highway en route to the UNESCO-listed town of Počitelj with its medieval fortress, unique townhouses, and Ottoman-style mosque. You’ll notice scars from when the Bosnian-Croat forces attacked the village in 1993, but still, Počitelj is among the most beautiful examples of a 14th-century town in the region.

Bosnia’s image in the 1990s was that of a war-torn country, though today once you enter the town of Mostar, the horrors of war are barely visible. This small riverside city of just over 100,000 people hosts many cafes, restaurants, and an open bazaar selling Turkish lamps, carpets, traditional kilim rugs, handmade laces, Persian ceramics, and copper wares. As you move throughout the bazaar you can’t help but notice the skyline dominated by minarets, yet the tallest structure is the new Catholic church and the enormous cross seen on the hilltop. The town’s key attraction remains the Stari Most ­– a 15th-century Ottoman-era bridge separating both sides of the town. In the 1993 Bosnian war, the Croatian army shelled the bridge and mass destruction came upon in the name of ethnic cleansing. Today, Bosnian Muslims and Catholics live together in relative harmony; the rebuilt Stari Most is the chosen venue for the Red Bull cliff diving sporting event, held every year in the summer. Young locals can be seen jumping off the bridge into the river below, a long-standing tradition.

After an afternoon at the bazaar, it’s time to eat. Bosnian food is a marriage of Middle Eastern and Mediterranean fare. Common dishes include ćevapi (sausage-shaped kebabs tucked inside pita bread, served with onions and sour cream), börek (flaky meat pastry), dolma (stuffed vegetable with meat), and flavored meat stews and broths. And then there’s Bosnian baklava, a sweet, flaky pastry dessert you must try no matter what you order as a main. The nooks and crannies of the old town have cozy cafes where hookah lovers are anchored throughout the day. Coffee enthusiasts should try the strong Bosnian coffee, which locals say tastes far different than its Turkish cousin but is similarly thick and bitter.

Stick around into the evening, because Mostar glows when the sun goes down with illuminated arches, brightly lit evening bazaars, and buzzing open-air cafes. 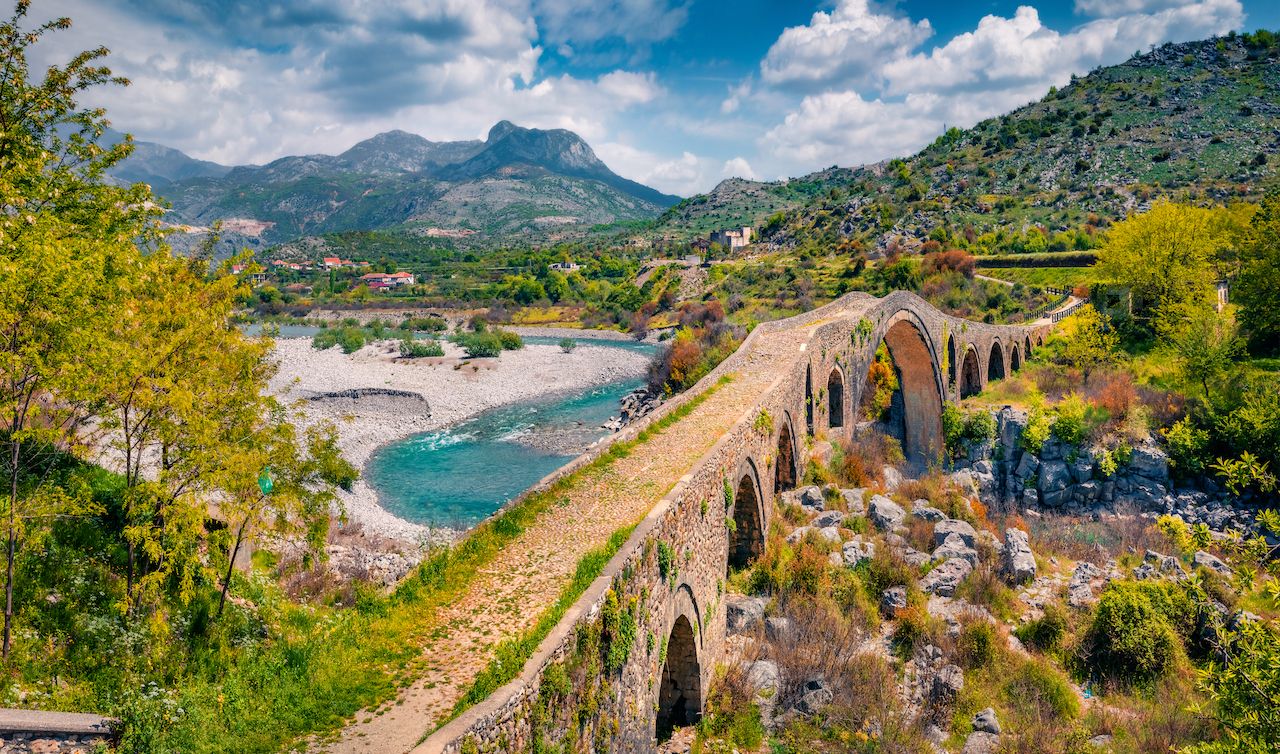 The northern Albanian town of Shkodër is a 4.5-hour drive from Dubrovnik. The crowds of tourists have recently started venturing to this long-neglected part of Europe. Now at peace and among the safest countries in Europe, the attractive city center of Shkodër is striking with its uber-cool art installations built from the very war artillery that impaired the country during the Yugoslav Wars between 1991 and 2001.

The pastel-hued buildings of the old town are reminiscent of the Venetians’ stronghold of early days. The St. Stephen’s Catholic Church, where many practice Eastern Orthodoxy and the mosque a few meters away put Shkodër at a crossroads of world cultures. The Marubi Museum opens a window into old Albania with street scenes showing the country grappling with the woes of the past: communism, conflict, and modernization. Lovers of art should visit the Venice Art Mask Factory, run by Edmond Angoni, an Albanian artisan who emigrated to Italy in the 1990s to master the Venetian art of mask-making. The Shkodër Historical Museum, in a former Venetian merchant’s house, also showcases Albanian history and culture.

The most visited destination in town is the Rozafa Fortress, located on a hillock. Scattered in Roman relics, the fortress was rebuilt by the Venetians and then the Turks. Because it is located at a higher altitude, the fortress has stunning views of the surrounding landscape including Lake Shkodra, the distant Albanian alps, and the city center.

Modern Albania’s positive vibe echoes along Shkodër’s pedestrian-friendly streets, in particular in its restaurants and cafes. Italian fare is served in most eateries in the city center, but don’t miss out on Albanian classics like byrek (a kind of sandwich in phyllo pastry stuffed with meat, spinach, and feta), baked cheese with tomatoes, lamb bake, or slow-cooked, rice-stuffed bell peppers.

I just traveled 3,300 miles through Europe. These were my favorite moments.

How to see the gorgeous waterfalls of Skradinski Buk in Croatia

The 4 Croatian islands you have to visit this summer

The essential Croatian dishes and drinks for the World Cup final