Much of what the average American knows about Bosnia and Herzegovina comes from history books, not travel blogs. Its capital, Sarajevo, has been immortalized as the city in which World War I began. Textbooks trace centuries of East-West trade through Ottoman Bosnia and chronicle the country’s century under Austro-Hungarian rule. Modern editions cover the Bosnian War, considered by many to be the worst European atrocity since World War II.

As history lessons go, however, no amount of thumbing through books can compete with watching Bosnian life unfold below craggy mountain peaks. Of all its Balkan neighbors, which have historically been united under various empires and governments, Bosnia gives visitors the most open, honest, at times challenging, and rewarding glimpses into what life is, and was, like in the Western Balkans.

Bosnia wears its history on its sleeve 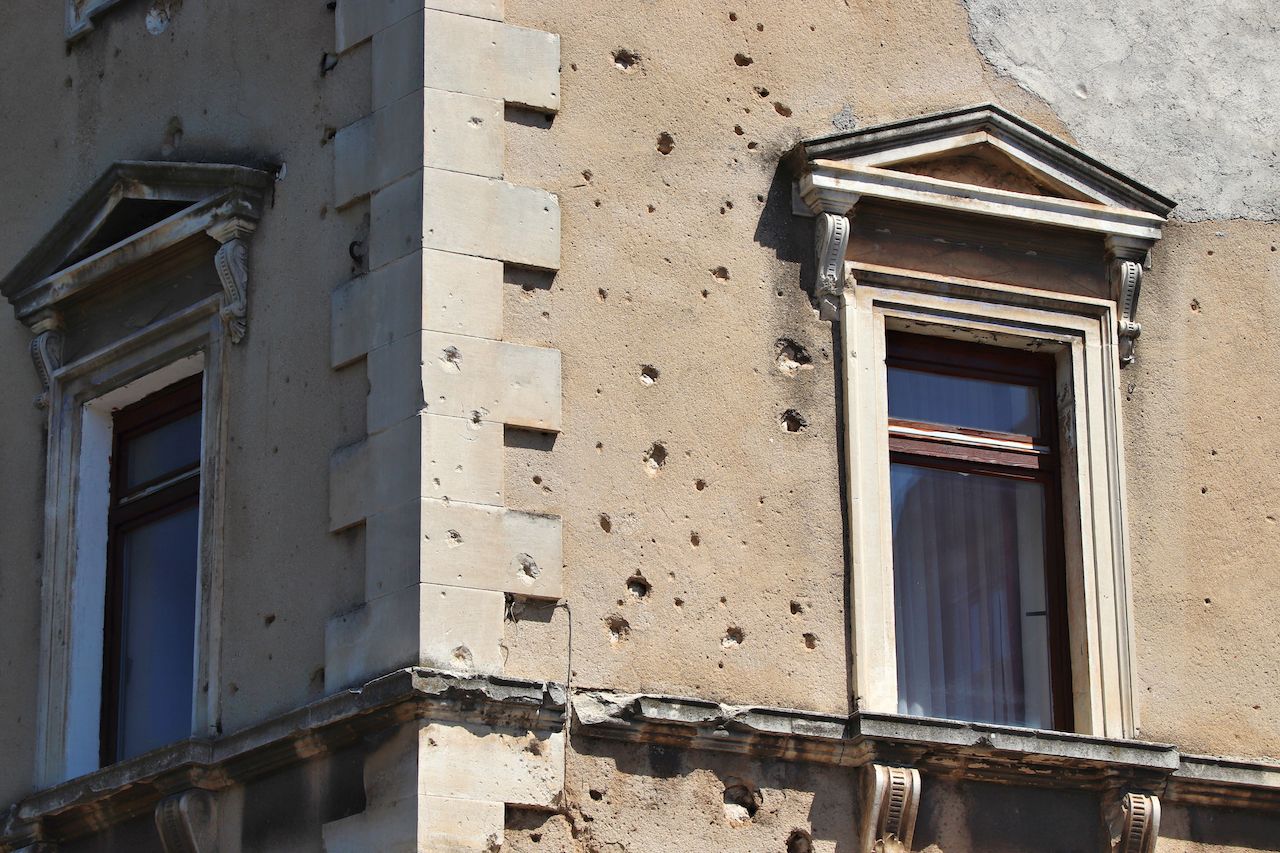 Chugging rosé astride a giant rubber ducky off the Dalmatian Coast during Croatia’s Yacht Week, you might forget that, not long ago, the Western Balkans belonged to the Socialist Federal Republic of Yugoslavia. Graffiti in Dubrovnik’s old town may recall revolutionary dates, but today’s travelers see King’s Landing when they arrive, not a city besieged by the Yugoslav People’s Army during the Croatian War of Independence.

Across the border in Bosnia, which has a mere 12-mile coastline and no association to a hit HBO series, there’s less to distract from the region’s recent past. Major cities like Sarajevo and Mostar, the capital of the Herzegovina region, remain pockmarked with bullet holes, and the country lacks the tourist infrastructure that Croatia’s incredible popularity has generated.

It’s not only Bosnia’s socialist scars that show off its history, however. Across the country, architecture strings together different centuries, from madrasas and clock towers built during the Ottoman Empire to grand, balconied buildings from the Austro-Hungarian Empire. In Sarajevo, mosques, churches, and synagogues share space on the same city block.

Bosnian buildings say a lot, but so do Bosnian people. Locals are quick to ask you what you know about their country, or the war, and fill you in on any gaps. Men will share that they, or their fathers, fought against the Bosnian Serb nationalists who besieged Sarajevo in 1992. Wherever you are, English-speaking locals will likely jump at the chance to teach you a bit about Bosnian history, meaning travelers never need to look far to find a good tour guide.

A tale of one city, divided 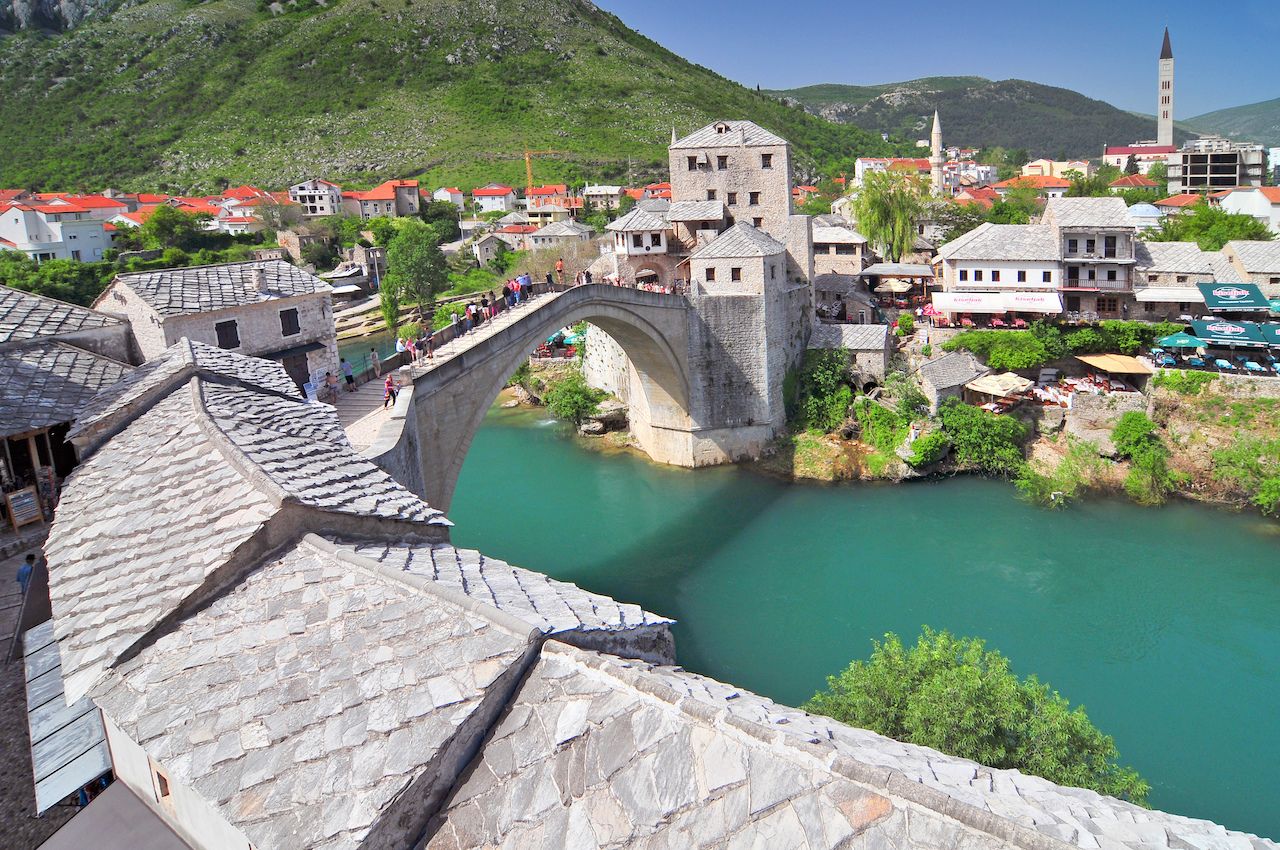 For centuries, storybook Mostar was a model for the peaceful coexistence of Bosnia’s Croats, Muslims, and Serbs. During the war, friends and neighbors took up arms against one another: Bosnians and Croats fought Serbian forces together, then fought each other. In the city center, the 16th-century Stari Most Bridge, Bosnia’s most-recognized landmark, was destroyed by Croat shelling. Reconstructed in the early 2000s, it now draws an invisible line between the Croat west bank and the Bosniak east bank.

Straddling the Neretva River as speedo-clad young men hang over the side of the bridge, preparing to plunge into the swift, icy waters below as is customary for local boys, travelers may not immediately recognize Mostar as a city divided. Upon closer inspection, though, visitors will see not only churches in one direction and mosques in the other but also segregated schools, separate bus systems, different hospitals.

Travelers generally hover around the bridge and narrow, labyrinthine bazaar on either side, where they shop for Turkish rugs and glass light fixtures or taste cevapcici, a type of sausage. Dig a little deeper into the city’s history at the 17th-century Koski Mehmed Pasa Mosque, which also offers an excellent view over the river; the Kajtaz House, built for a 16th-century Turkish judge; and the 18th-century Muslibegović House, now a museum and hotel.

To truly experience the magic of Mostar, wake up early with morning’s first call to prayer and start every day with a coffee, arguably the country’s most important Turkish influence. Before you go, take a moment of silence at the “Don’t Forget” stone near the bridge, a stone on which those words are written to commemorate the war and its impact on the city. 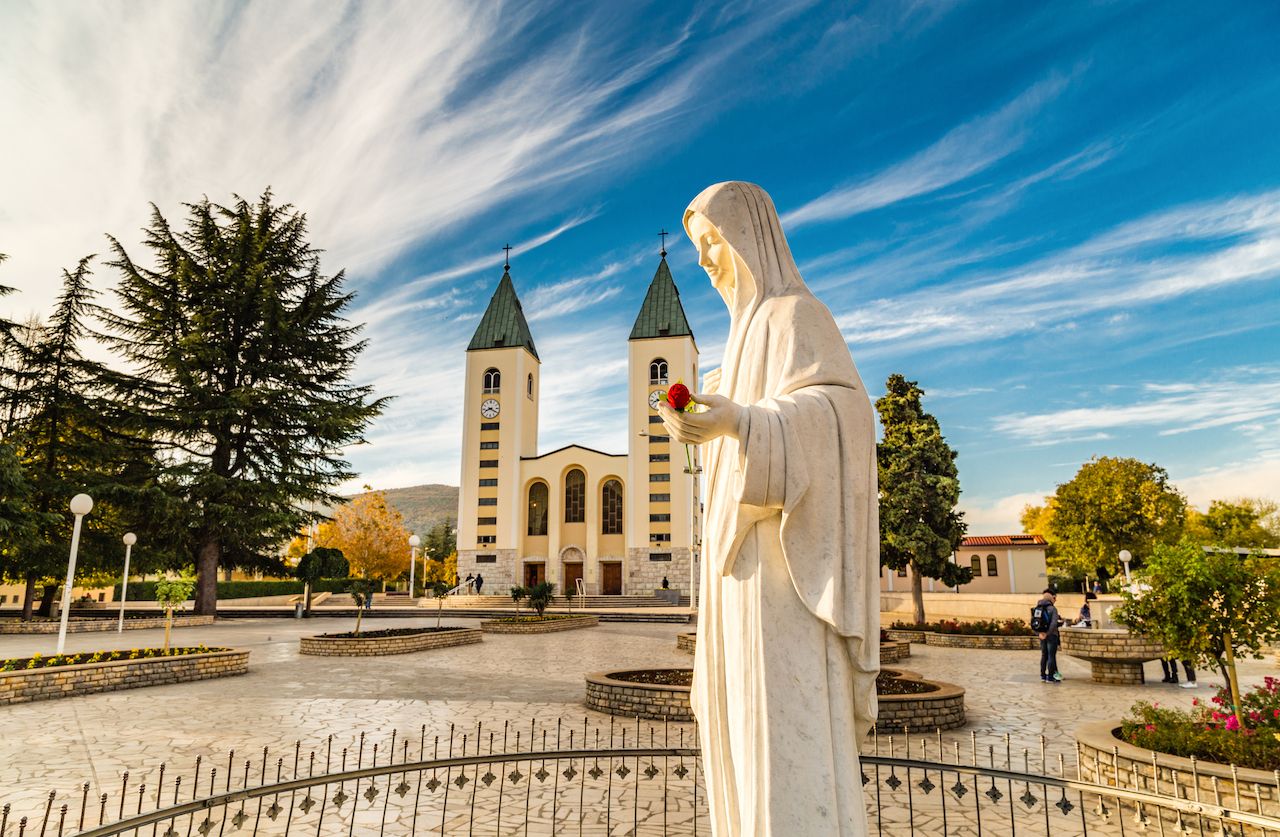 About 15 miles southwest of Mostar, Medjugorje is in its early days as a historic place. It came to prominence in 1981 when a group of local Croat children claimed to have apparitions of the Virgin Mary. Today, pilgrims descend on the site’s shrine en masse, some still claiming to see the Blessed Mother, known locally as Our Lady of Medjugorje, while others have reported mystical or supernatural happenings.

According to the Medjugorje website, the shrine has welcomed more than 40 million pilgrims to date, though it has yet to be authenticated by the Catholic Church. While Pope Francis has expressed personal concerns over today’s alleged apparitions, the Vatican has committed to a formal investigation into the original claims.

To see a holy site that’s older than a Millennial, visit the 600-year-old Blagaj Tekija monastery at the base of a cliff roughly 15 miles southeast of Mostar. Here, you can admire more Ottoman architecture and the blue-green Buna River. The Dervish monastery also hosts traditional zikr praise-chanting three nights a week. Plan an afternoon visit and lunch at a riverside restaurant.

A microcosm of Bosnia throughout the ages 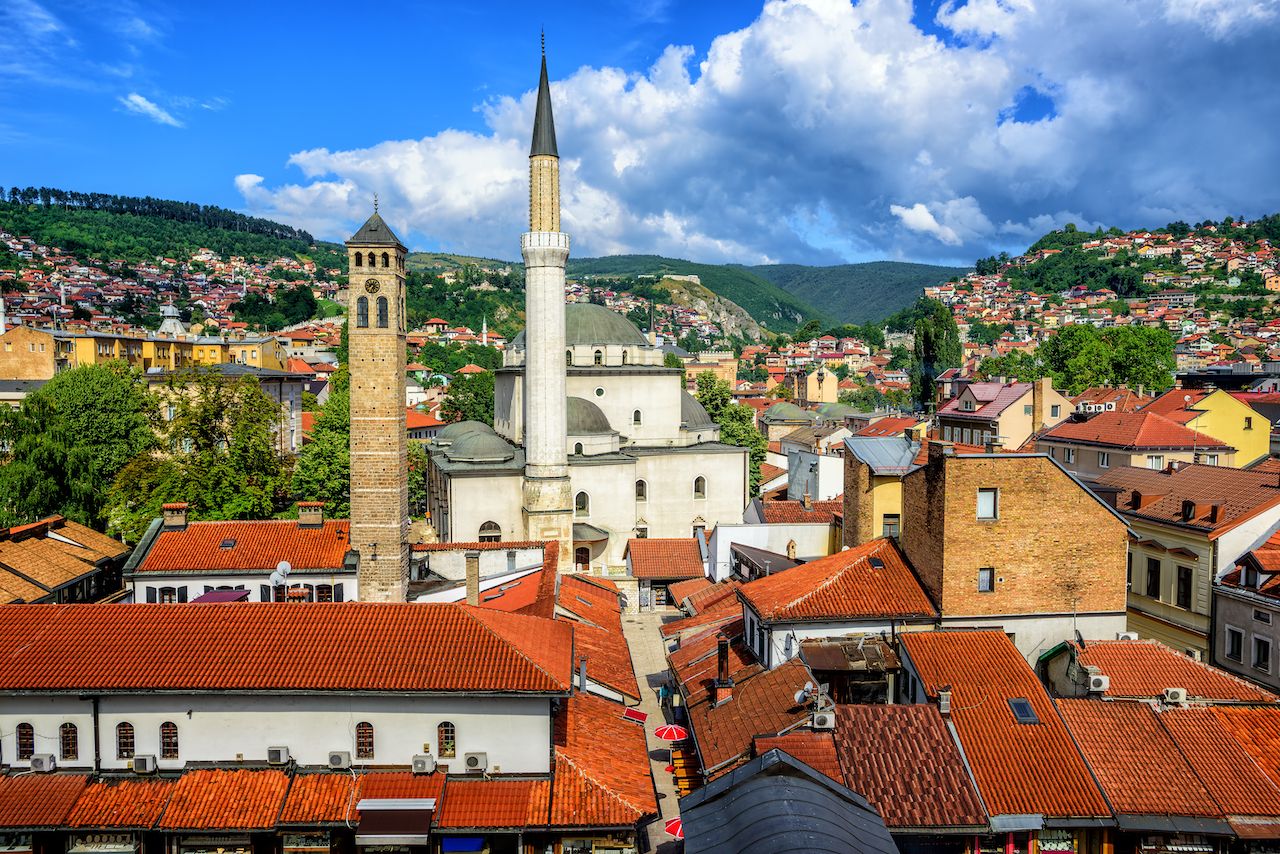 An Austrian traveler I met in Mostar who had just come from Sarajevo described the two cities like this: Mostar, a fabulous old town in an average city, and Sarajevo, a fabulous city with an average old town. Though pat, it’s not entirely wrong.

Sarajevo’s old town revolves around Baščaršija, more an open-air mall than a city center, albeit with a better food court stocked with coffee, baklava, cheesy burek pastries, and döner kebabs. At its core is the wooden, Ottoman-style Sebilj fountain, which opens to antique shops, restaurants, and hookah bars patronized by locals and tourists alike. It’s a nicer old town than Martin let on, but even the night-shift concierge at my hotel admitted that Sarajevo’s old town was not the city’s biggest draw, personally advocating for the indie film and music scenes.

Sarajevo’s old Turkish quarter may not stand out like other European old towns, but it does contribute to the city’s rich, historic tapestry. Also contributing are sites like the 16th-century Gazi Husrev-beg Mosque, the Latin Bridge where Archduke Franz Ferdinand was assassinated in 1914, and the Sarajevo Tunnel, now a museum, which was built during the Bosnian War to allow supplies, aid, and passage to and from the besieged capital.

Better still, Sarajevo keeps excellent records. Make time for the National Museum of Bosnia and Herzegovina; Svrzo’s House, the former residence of a wealthy, 18th-century Islamic family; and the Jewish Museum of Bosnia and Herzegovina. At the end of the day, though, if one landmark sums up Sarajevo’s past, it’s Vijećnica, or City Hall. An unmistakable orange-and-yellow-striped building dating to the Austro-Hungarian Empire, it once served as the national library, was destroyed in the siege of Sarajevo, and has since been painstakingly restored in its original image, though sadly the library was negligibly salvageable. 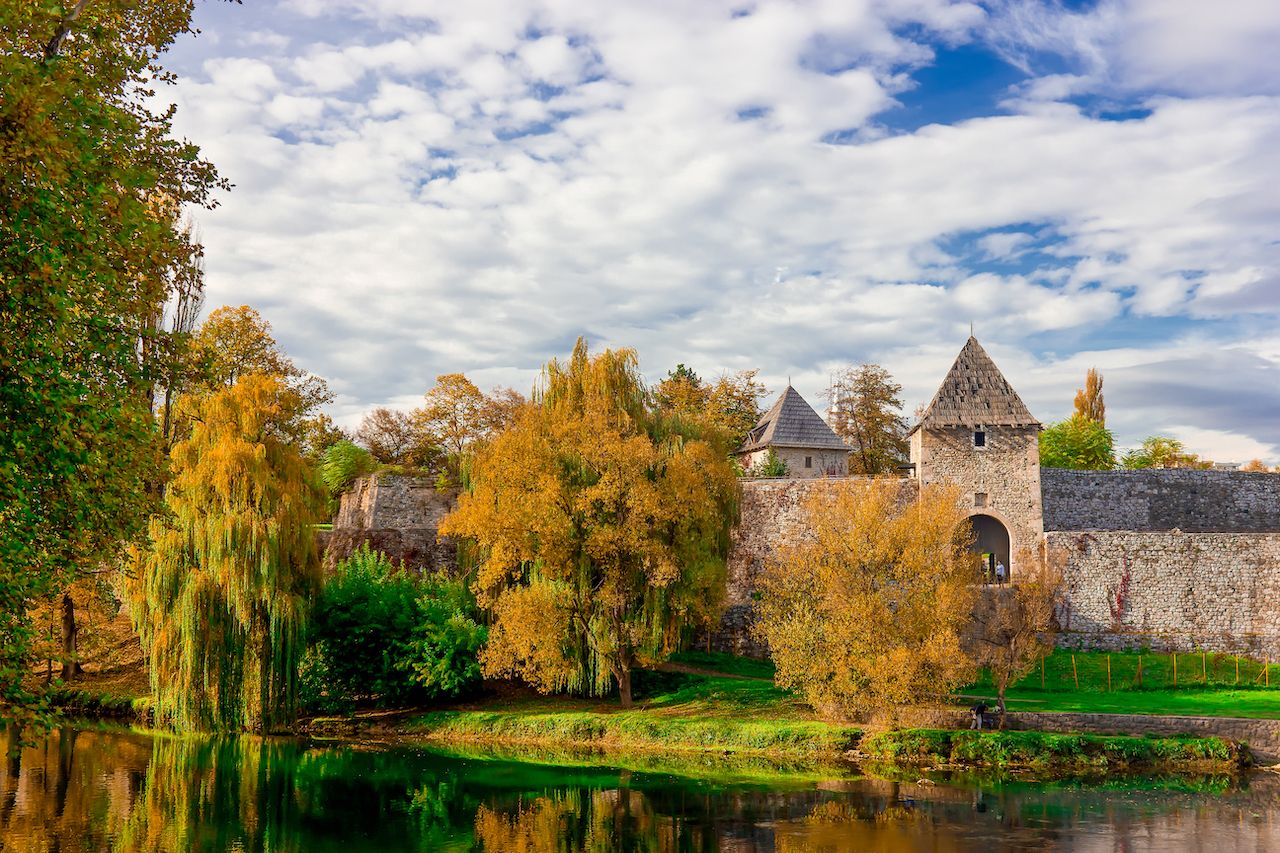 Bosnia’s largest city after Sarajevo, and the de facto capital of its Serb-major entity, Banja Luka saw many of its historic structures destroyed during the war, though both its 16th century Ferhat Pasha Mosque and Christ the Savior Orthodox Cathedral have been reconstructed. The city’s oldest monument, the medieval Kastel Fortress, still stands along the Vrbas River. Check out the Museum of the Republika Srpska, the Museum of Contemporary Art, and the Ljubačke Doline ethnographic museum while in town for a quick introduction to Banja Luka. 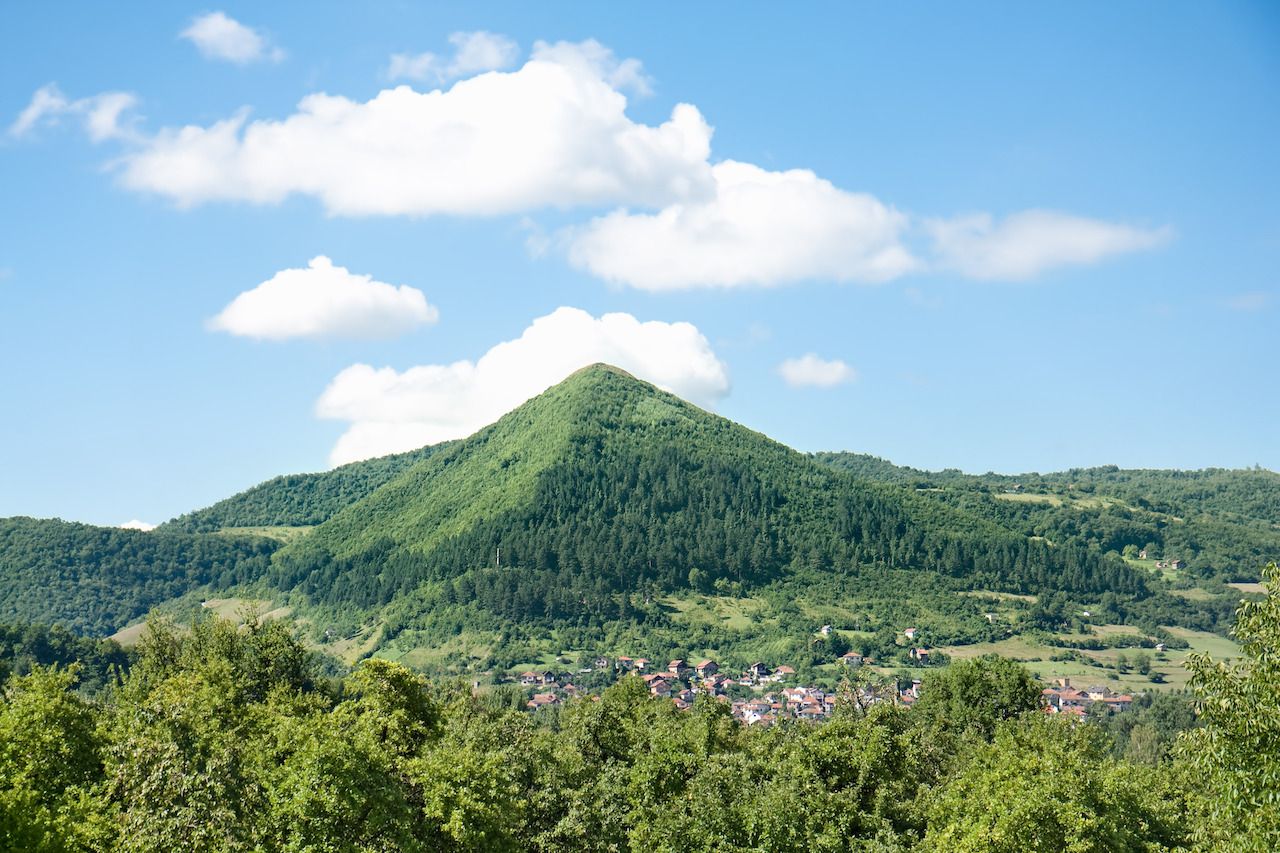 Not for the humorless historian, the Bosnian Pyramids are either ancient relics, as pseudo-archaeologist and amateur excavator Semir Osmanagić claims, or simply unusually pointed hills, as many experts believe. Osmanagić maintains that the site’s central pyramid, coined the Pyramid of the Moon, is both the largest and oldest step pyramid in the world. Though it’s yet to be verified, the Bosnian Pyramids have nonetheless become a cult attraction in Bosnia, worth seeing whether for their historical, pop cultural, or simply scenic value.

Road TripsHow To Plan the Ultimate Road Trip Through the Balkans
Tagged
Culture Insider Guides Bosnia and Herzegovina
What did you think of this story?
Meh
Good
Awesome

The Ultimate Guide To Skiing in Bosnia and Herzegovina

Why Bosnia and Herzegovina Is the Next Big European Destination

Everyone Thinks Bosnia Is Still a Dangerous Place. Here’s Why I Can’t Wait To Go Back.

Why People Jump Off of This Bridge in Bosnia