Perhaps you’re an adrenaline junkie who’s been sunburned one too many times. Or you’re deathly allergic to bee stings. Or, more likely, you just want to try a high-intensity sport in a location that’s less intimidating than the open window of an airplane flying 13,000 feet above the ground. If that’s the case, you’re in luck because there are more opportunities than ever to pursue extreme sports in more controlled — and less panic-inducing — settings. Here are some of your options. 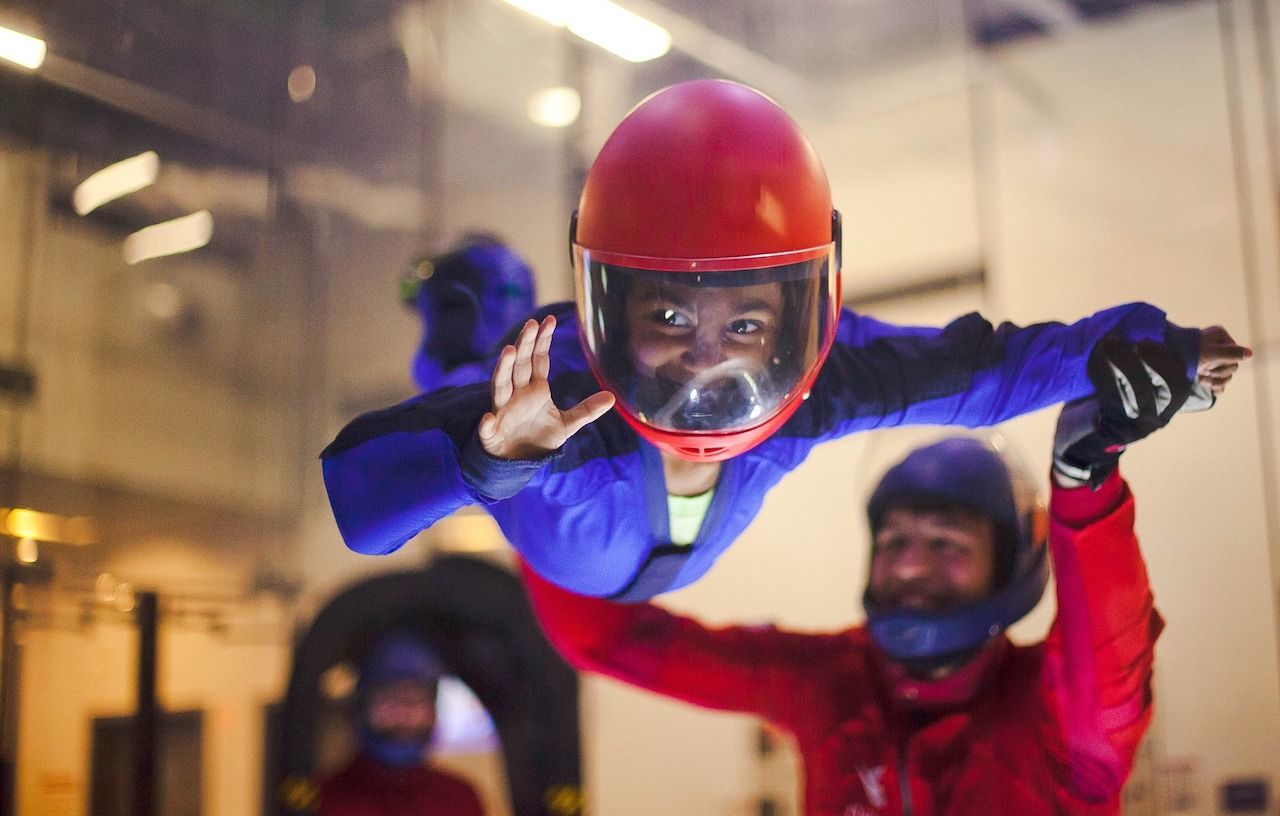 First designed in order to train military parachuters, vertical wind tunnels, where wind rushes upwards at 120 mph and suspends you in a horizontal skydiving stance, have grown in popularity around the world. Professional skydivers use them for practice, and the rest of us can enjoy winds tunnels for the sense of falling without the sheer terror.

iFly, which has locations in sixteen US states and Brazil, offers packages of anywhere from two to five “flights” per person, at prices ranging from $69.95 to $131.95, or a package of ten flights to be shared by five people for $299.95 in its California locations. (Prices may vary by state). Unlike real skydiving, anyone over three years old can participate.

If you really want to get scared, without the actual risk, pay an extra $20 and use iFly’s virtual reality headset to feel like you are really stepping out of an airplane very, very high off the ground. 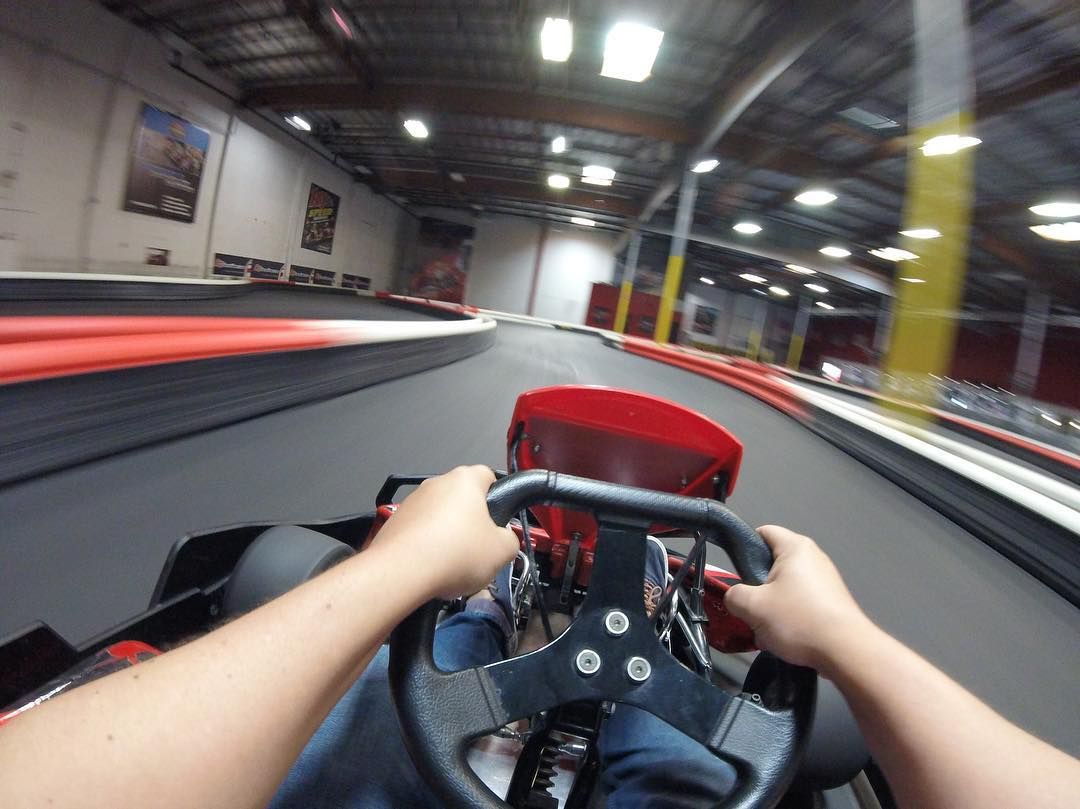 Not every speed demon has a death wish — or the years of training required to maneuver a Formula 1 race car through the streets of Monaco. Fortunately, there’s kart racing, where you can don a helmet, buckle up behind the steering wheel of a roofless go-kart with a 2- or 4-stroke engine, or an electric one, and channel your inner Michael Schumacher.

In fact, Michael Schumacher and quite a few other Formula 1 champions got their start in kart racing, so the adrenaline rush is legit. Many indoor kart locations also have smaller karts for younger drivers. You can find kart racing around the world, including at the Michael Schumacher kart center in Kerpen, Germany, which has both indoor and outdoor tracks, charging 12.50 EUR ($14.60) for a single 10-minute ride, and 114 EUR ($133) for a pack of ten rides.

K1 Speed is the biggest kart racing company in the US, using electric karts at its indoor speedways in fifteen US states and Canada. Pricing varies by location, but in California one roughly 10-minute race costs $22, while three cost $50, and an annual membership is $80. Burning through $22 in ten minutes might feel steep, but it’s a lot less expensive than the car Schumacher drove to in two of his victorious races, a Ferrari F2001, which costs a mere $7.5 million. 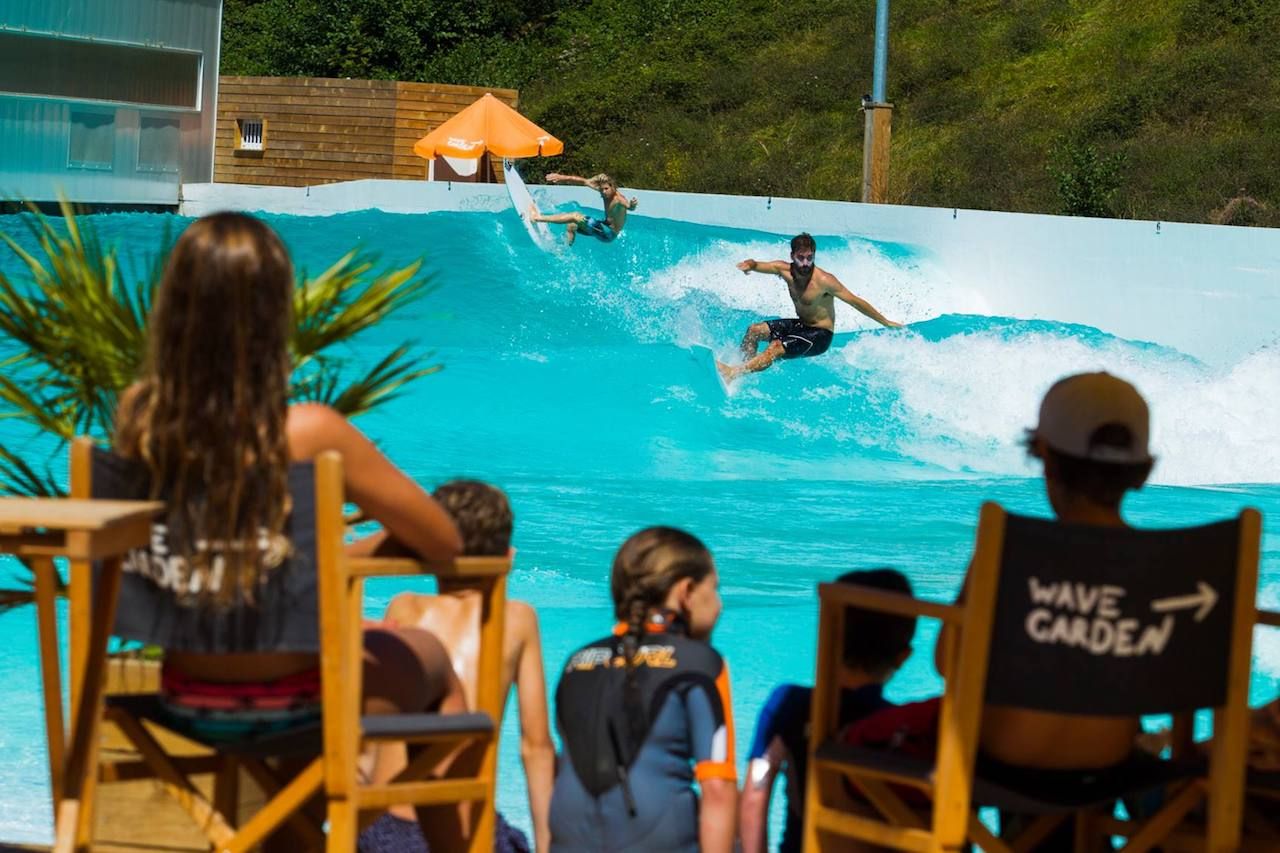 If you want to surf but the theme from Jaws comes to mind every time you look out on the open ocean, or you live 1000 miles from the closest beach (Denver, for example), wave pools might be the solution for you.

Most wave pools are just attractions in amusement parks using machinery to spice up ordinary swimming pools with splashy surges of water, so don’t wax up your surfboard and head to your nearest water park expecting to carve some turns. You need to find wave pools specifically designed for surfing, which require more sophisticated systems to create rollers that can be ridden by full-sized humans on surfboards.

The technology is still developing, but we expect to see more bona fide artificial surf waves in the coming years. Most of these are outside, built on existing lakes and lagoons. The first public surf spot using WaveGarden technology was built in Wales; their second public location is in Austin, Texas, at NLand Surf Park. Prices for a 50+-minute session range from $60 to $90.

Near Dubai in the United Arab Emirates, Wadi Adventures has an artificial wave pool that produces waves up to ten feet high, and can be booked for six people at a time. Eleven-time world champion Kelly Slater has also designed a high-speed wave pool using secret technology near Fresno, California, but it’s not open to the public…yet. (If and when it is ever is, it’ll be wickedly expensive).

An indoor skydiving facility in New Hampshire does actually have an indoor wave, but it’s small and best for beginners. As for surfing in Denver, there are wave pools like the ones at Water World Colorado, but they’re better suited for boogie boarding. But if you’re nearest beach is a 12-hour drive away, boogie boarding may be good enough. 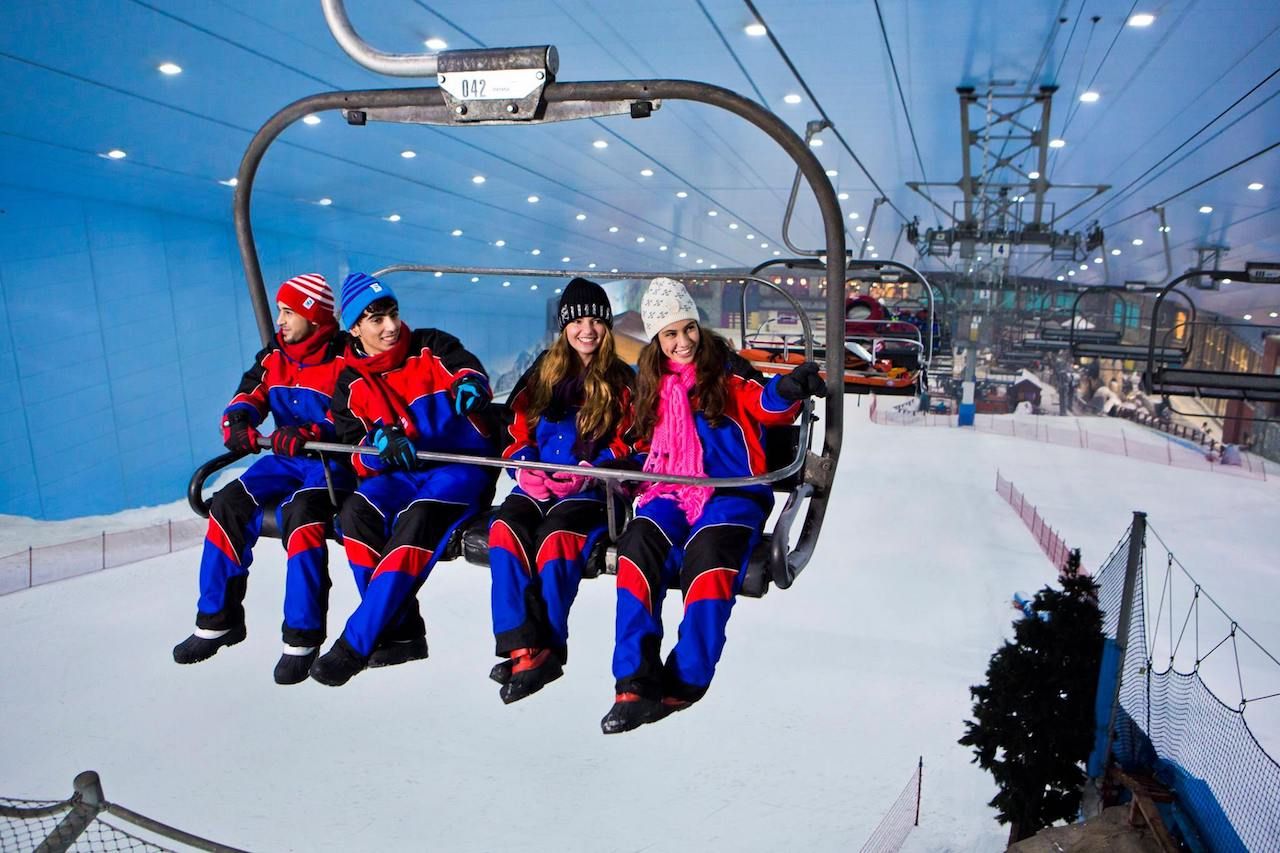 Indoor ski hills and snowboard tunnels promise the joys of carving turns on snow without the threat of avalanches or frostbite. Snowmaking technology makes it possible for novice skiers and even professional riders to ski or snowboard in either balmier climates or during the warmer times of the year.

Quite possibly the best-known, and most incongruous, indoor ski hill in the world is Ski Dubai, the first and, until Ski Saudi Arabia opens soon, only such hill in the Middle East. They will be joined by Ski Egypt, the first indoor skiing in Africa. It might be 107 degrees outside in Dubai, but this ski hill located inside the massive Mall of the Emirates comes complete with a chairlift, a lodge serving hot chocolate, and even penguins.

Indoor ski hills like SnowZone in Madrid, Snowhall in northern France, and SnowWorld in the Netherlands allow for snowsports where mountains are absent, and yet others, like snow tunnels with half pipes in Finland and Sweden, are geared towards athletes hoping to hone their skills throughout the year.

An indoor option that doesn’t require snow at all can be found at Woodward Ski & Snowboard Camps, which have facilities in Pennsylvania, California, and Colorado. Indoor terrain parks allow young campers to practice snowboard flips and tricks on wood tracks, landing into big pits of spongy foam pieces. A three-hour, drop-in session at Woodward Tahoe is $49. 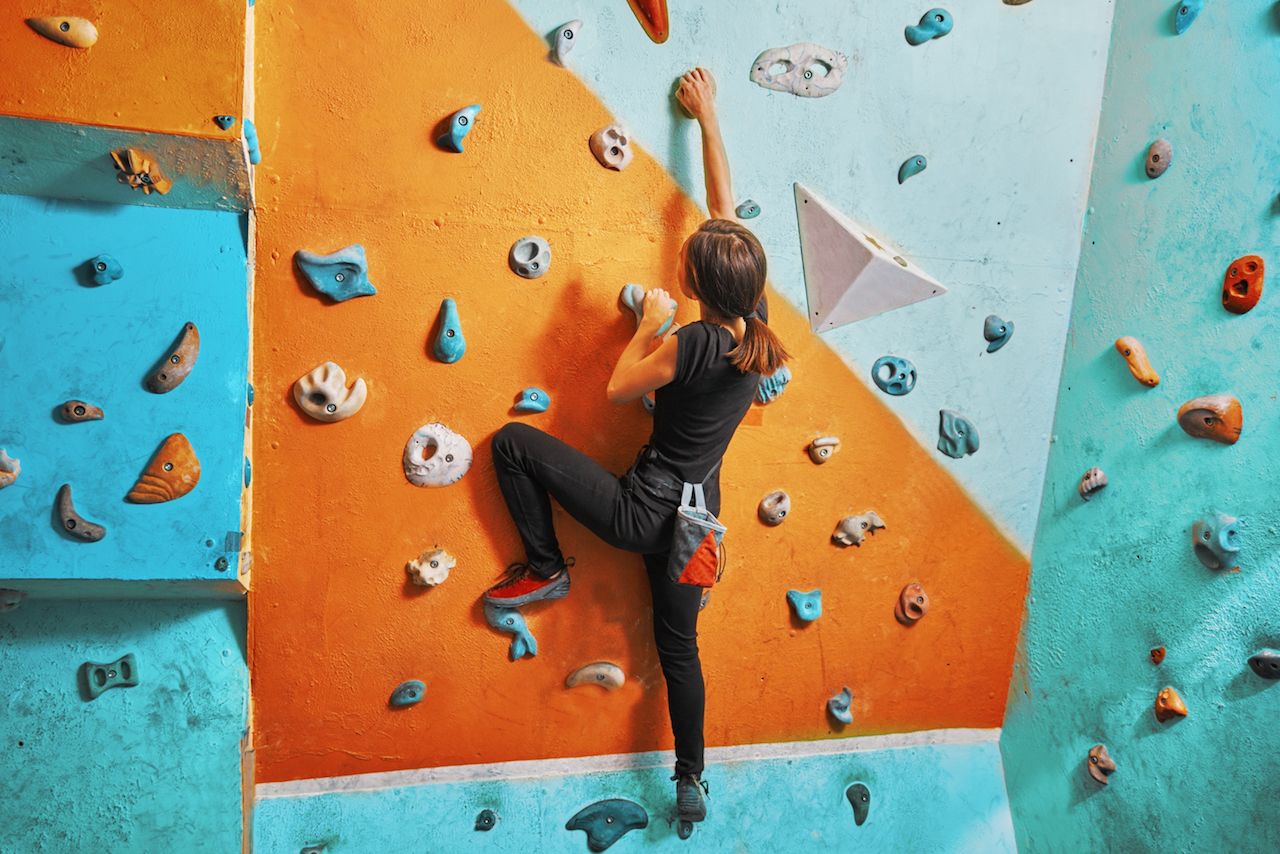 Quite possibly the most practical inside version of any outdoor sport is indoor rock climbing. The first interior climbing facility opened in the US over thirty years ago, and now climbing walls can be found the world over, not just in climbing gyms, but also in high schools and university campuses. For schools, climbing walls don’t just promote exercise; in using the belay system, students need to work cooperatively to achieve a goal.

While a few indoor climbing walls still attempt to resemble something organic, most use colored-coded hand and toe holds to mark routes of varying difficulty. Climb So Ill in St. Louis dispensed with any pretense of looking like real rock and has one of the wildest looking climbing walls out there, with an eye-like orb you need to surmount. A day pass there will cost your $16, plus an additional $19 for equipment (shoes, belay gear, chalk bag, etc.). Planet Granite and Earth Treks operate gyms in California, Oregon, Maryland and Colorado, while New York’s Brooklyn Boulders now has additional gyms in Chicago and outside Boston.

Indoor climbing gyms are now a fixture of most major US and European cities. In Brazil, Argentina, and Chile, you’ll find indoor rock climbing, too. There are so many places to climb indoors, there’s little reason not to do so. With enough practice, you may even be ready to try it outside.

GalleriesA Definitive Bucket List of the 25 Things You Need To Do as an Adventure Traveler
Tagged
Extreme Sports Outdoor
What did you think of this story?
Meh
Good
Awesome