Everyone has heard of the popular beaches of Brighton and Blackpool, but with 7,760 miles of coastline, the United Kingdom has an abundance of gorgeous beaches that most of the world has no idea exists. From wild and rustic shores to glorious bays overlooked by castles, there is no shortage of breathtaking beaches to explore in the UK. Here are seven of the most beautiful ones. 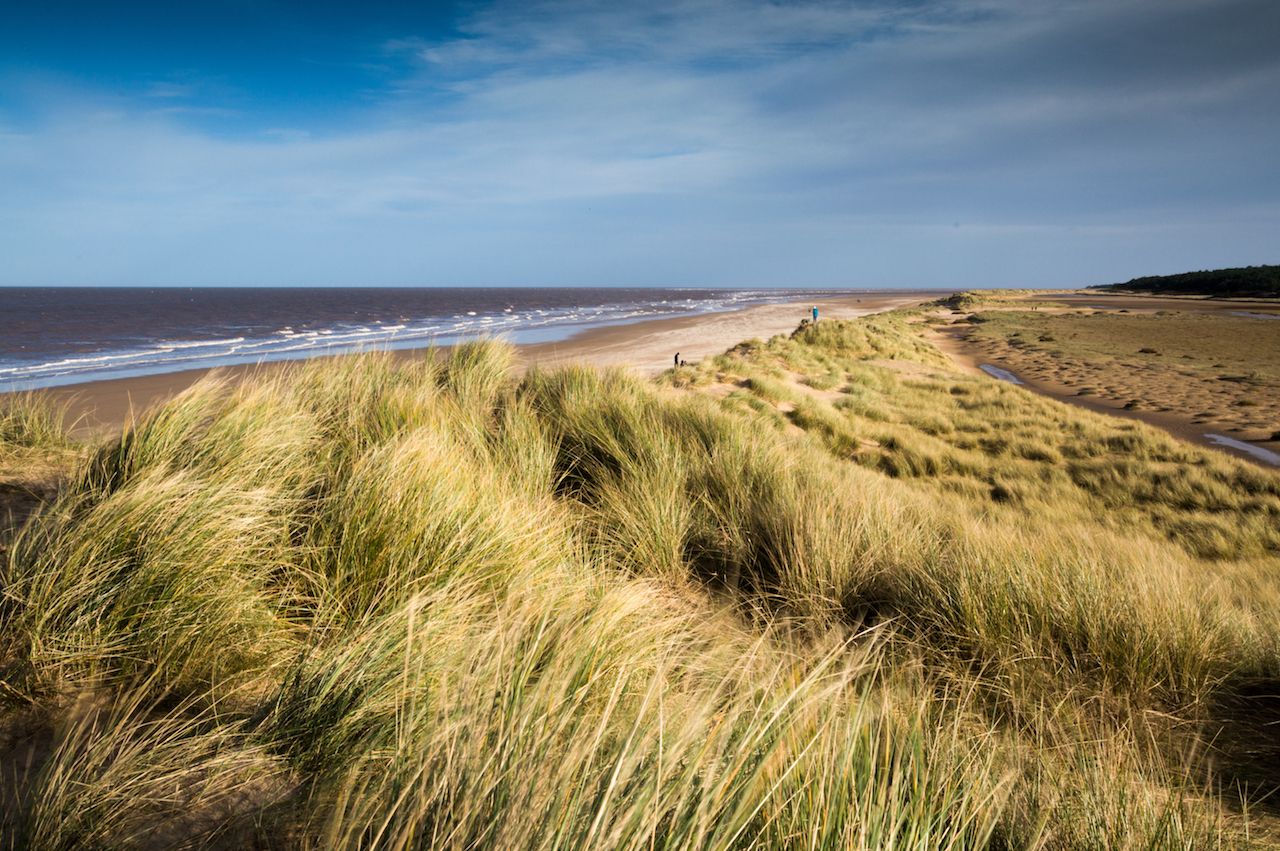 The windswept coastline of North Norfolk encompasses Holkham Bay, a stunning beach of golden sand with a backdrop of dunes and pine forests. The tracks behind the beach form part of the Norfolk Coast Path, and a walk along the boardwalk takes you to the harbor town of Wells-next-the-Sea and its many restaurants, pubs and galleries. Norfolk is known for its big sky, and the wide blue yonder is certainly impressive at Holkham Bay. Both the sky and the sand appear to stretch forever, although the beach is “only” four miles long. It’s easy to escape the crowds and claim a perfect spot of your own. Although you can swim at Holkham, care should be taken as there are strong tidal currents.

Camber Sands is one of the only sandy beaches in Sussex and it certainly makes up for the lack of sand elsewhere in the county. Only two hours from London and 10 minutes from the medieval market town of Rye, Camber is a vast expanse of uninterrupted sand and grass-fringed dunes. Deserted for much of the year, it’s only busy on weekends during the summer. Ornithologists are drawn to the dunes for its birdwatching opportunities, and a kitesurfing center offers lessons on the sands. Depending on the tide, low shallows can make for a long walk before it becomes deep enough to swim. 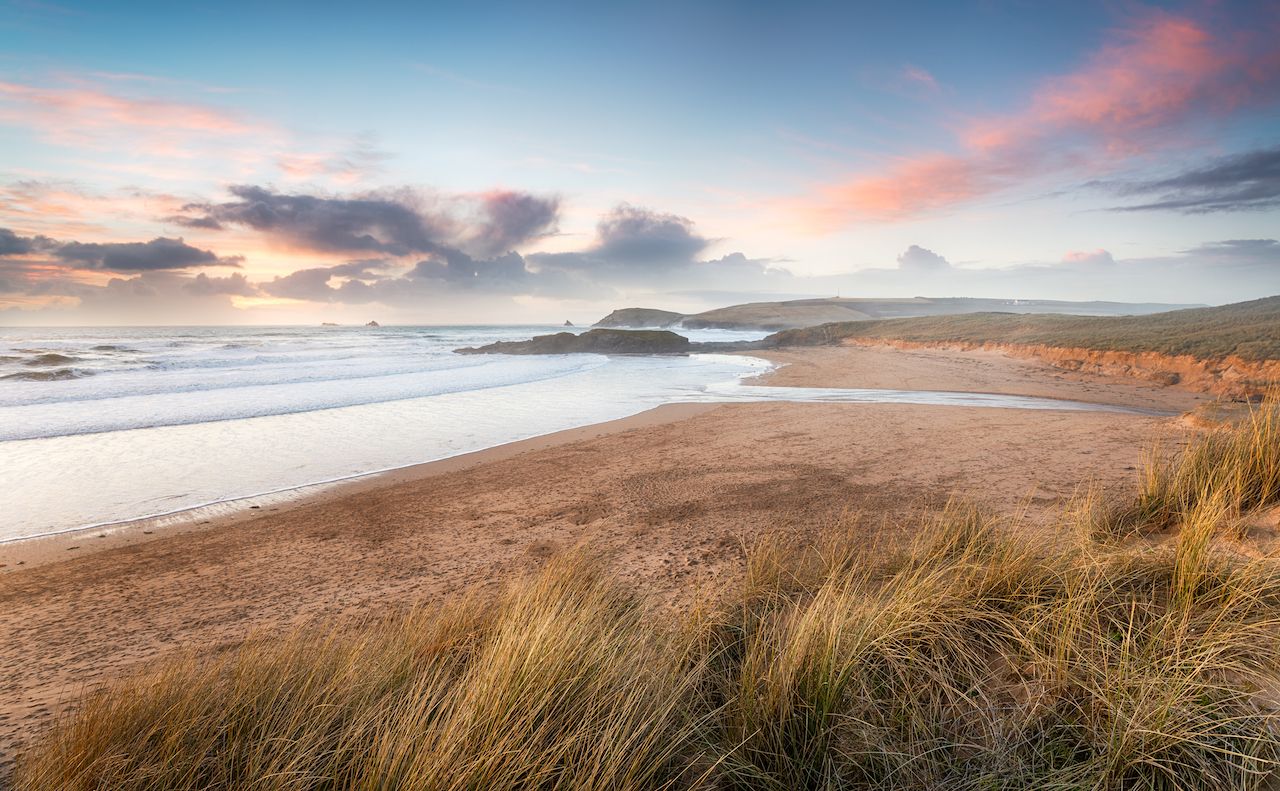 Located 20 minutes by road from the fishing village of Padstow, known for its seafood restaurants, Constantine Bay is a quintessentially Cornish beach. Found at the end of a narrow country lane, the beach has a wide, sweeping arch of soft golden sand. It’s a popular spot with surfers and bodyboarders, but it’s also great for swimming.

There are rock pools to explore and rocks to climb, and as an alternative to bodyboarding, kids sandboard down the dunes behind the beach. Although the beach is full of activity, there’s enough space for everyone to find a patch, even during the summer months. Dog-friendly throughout the year, Constantine is a beach for everyone — surfers, families, sunbathers, and pooches. 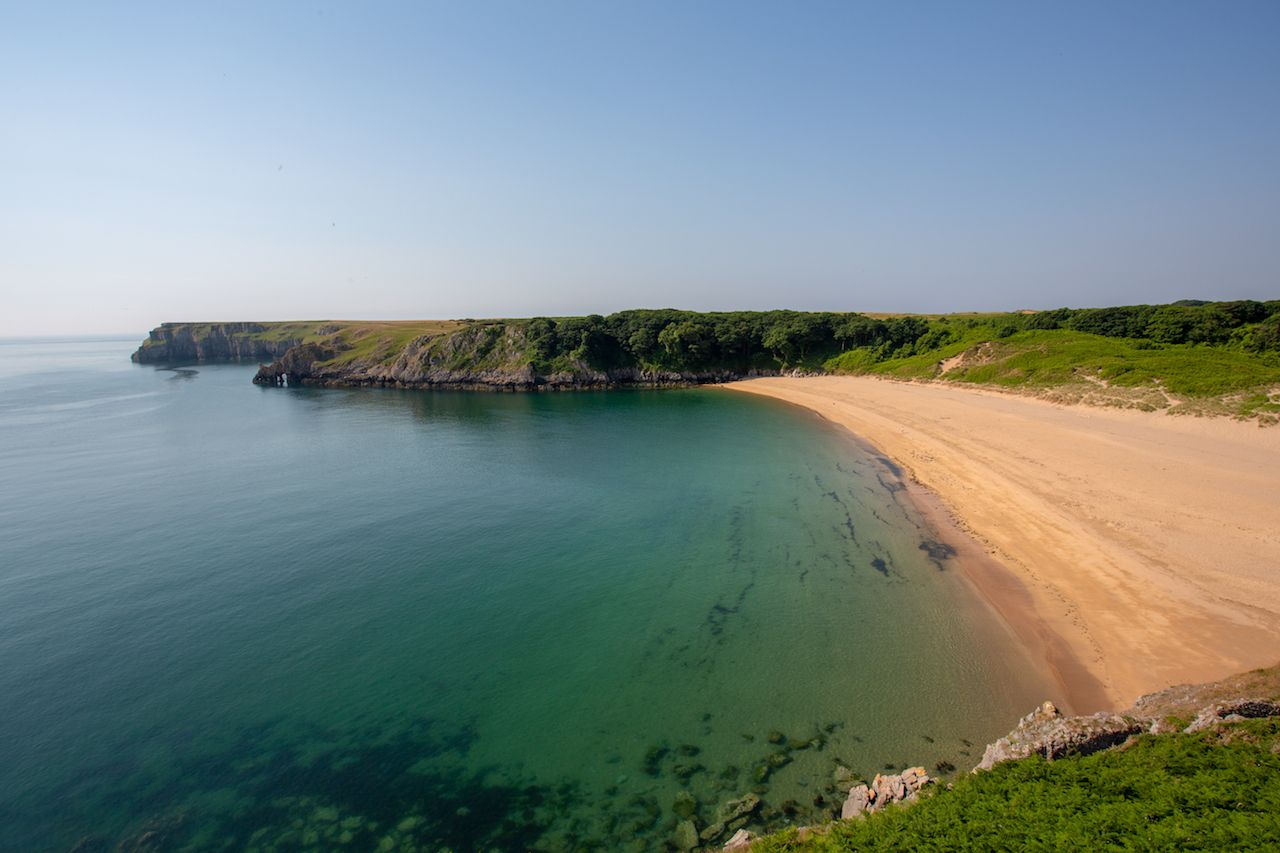 It’s worth the half-mile schlep over the cliffs from Stackpole Quay, to reach Barafundle Bay Beach. Surrounded by rugged coastline, there are excellent views of the yellow-sand bay and deep-blue water from the clifftops. If you’re up there on a sunny day, you could easily think you’re overlooking the Mediterranean.

The sea is perfect for a dip and for strong swimmers. There are rocks and caves to explore at either end of the bay and a kelp garden on the northern edge. Despite its location, Barafundle is a popular beach and in the summer months it can get busy — but spending a day here is just as nice in the spring or the fall. The beach remains completely unspoiled and there are no facilities, although there is a pub at nearby Stackpole Quay for a bite to eat and a refreshing pint. 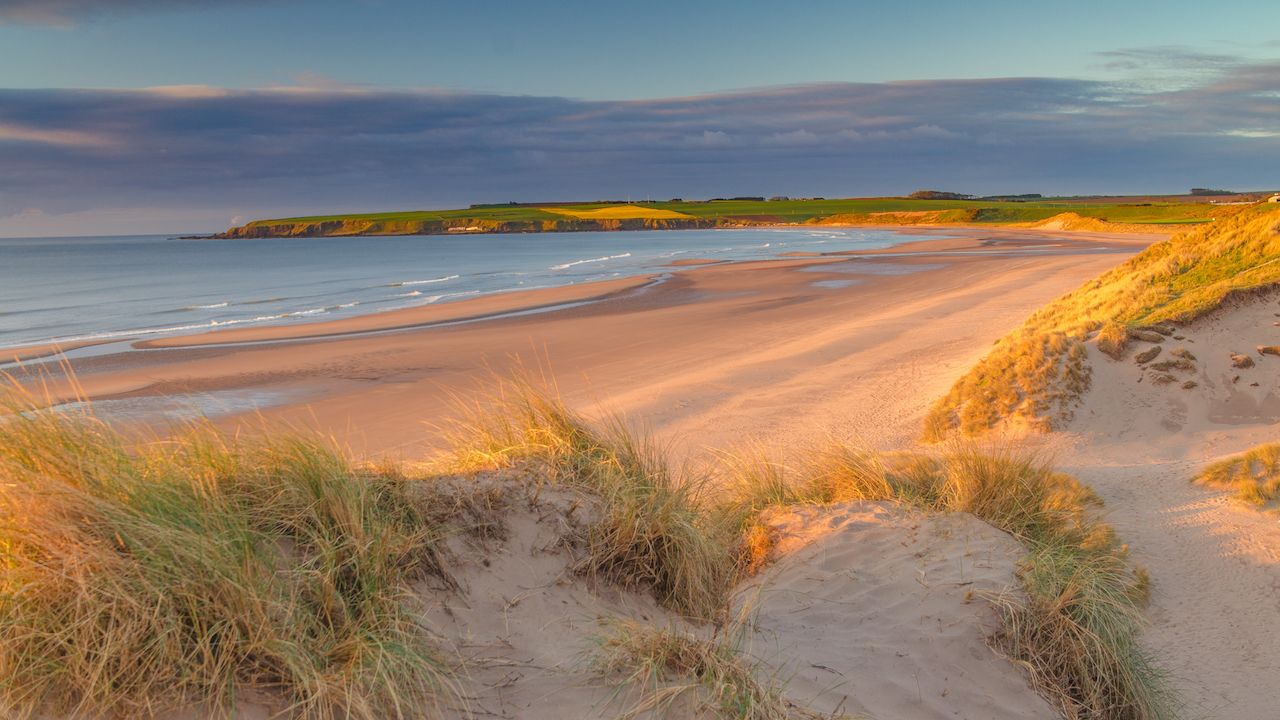 This two-mile secluded stretch of sand on the Angus coastline is overlooked by Red Castle, a decaying 12th-century fortress, originally built to defend against marauding Vikings. The beach is frequented by surfers but is not suitable for swimming due to strong currents. It’s also a popular spot for birdwatching and horse riding and its remote location ensures a lack of crowds whatever the season.

After a storm, the beach glistens under the sun and semi-precious stones such as jasper and agate can be found. At the northern end of the bay are a warren of caves and sea arches, which are fun to explore at low tide. The historical harbor town of Monstrose is eight miles away and is home to a wildlife reserve. 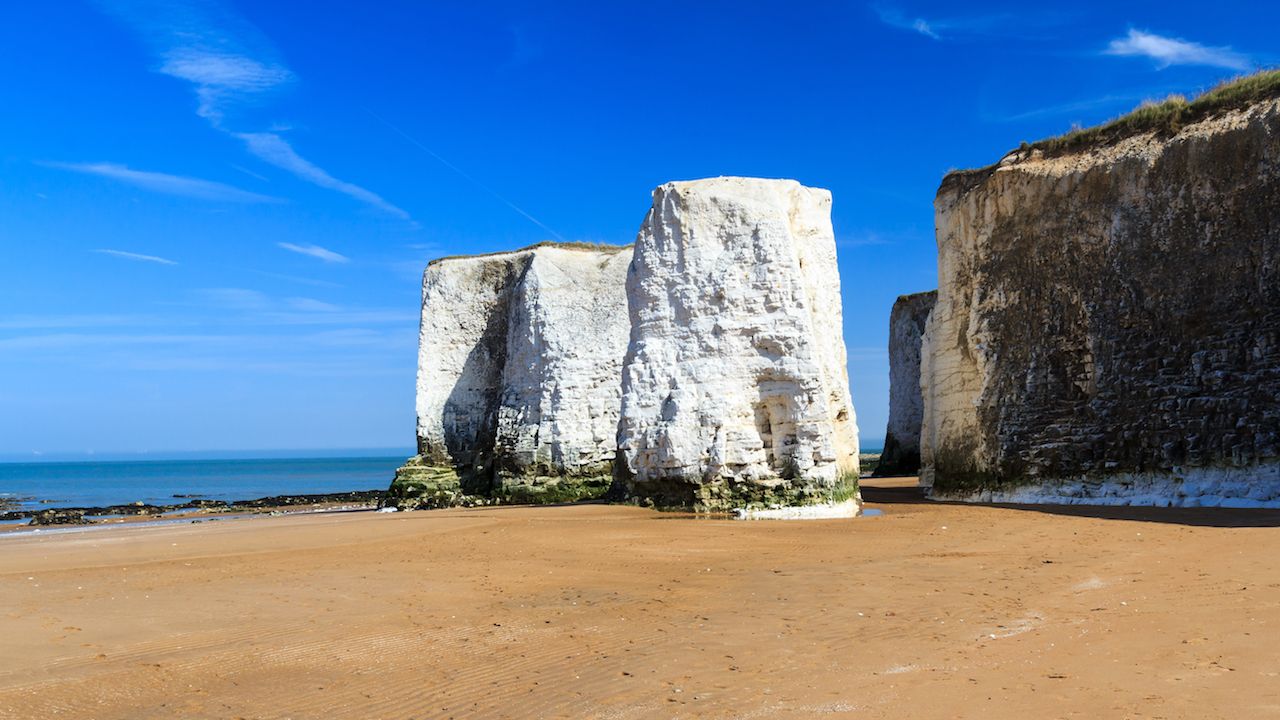 Chalk cliffs enclose the long and gently sloping, sandy beach of Botany Bay. At the rear of the bay next to the sand dunes, a cycle track runs in both directions along the coast to other beaches, and at low tide it’s possible to walk to Joss Bay, Kent’s best surfing beach. The sea is good for surfing, swimming, and kayaking and the rock pools are home to crabs, anemones, and shrimps. Erosion has created picturesque chalk stacks, and there are caves to explore. It’s a perfect beach for families, but tends to become very crowded during the summer. 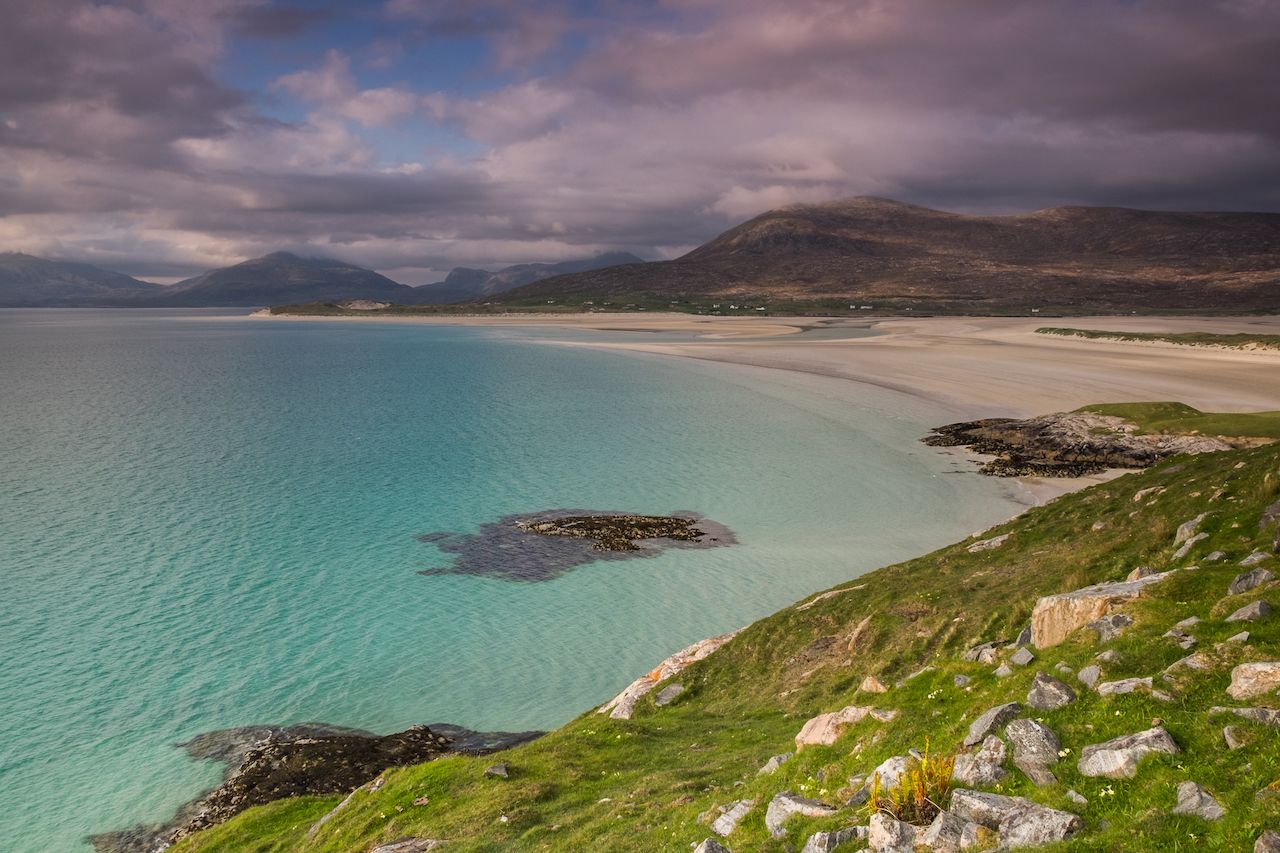 Whether the sun is shining down on the turquoise-green waters, or the waves are crashing on a wild and wet day, there is no denying the magnificence of Luskentyre Sands. With a backdrop of windswept dunes and soaring mountains, the silver-white sand beach is an ideal destination if you want to get away from it all. Although the water appears tempting, dipping a toe into the icy Hebridean Sea is a reminder that this isn’t a Caribbean island after all. The rugged island of Taransay can be seen in the distance. Dolphins, seals, and otters are occasionally spotted and chances of seeing a sea eagle soaring above the waves are high.

Hiking7 Epic Long Walks in the UK You Can Plan Yourself
Tagged
Beaches and Islands Insider Guides United Kingdom
What did you think of this story?
Meh
Good
Awesome