There is nothing quite like unzipping your tent in the morning to see the sun coming up over the ocean. Whether it’s a classic white sand beach on a tropical island or a wild and remote shore scattered with driftwood, wherever you are headed in the world, you can usually find a beach to call home for a night or more. Here are seven underrated coastal camping spots that you may not have considered before. 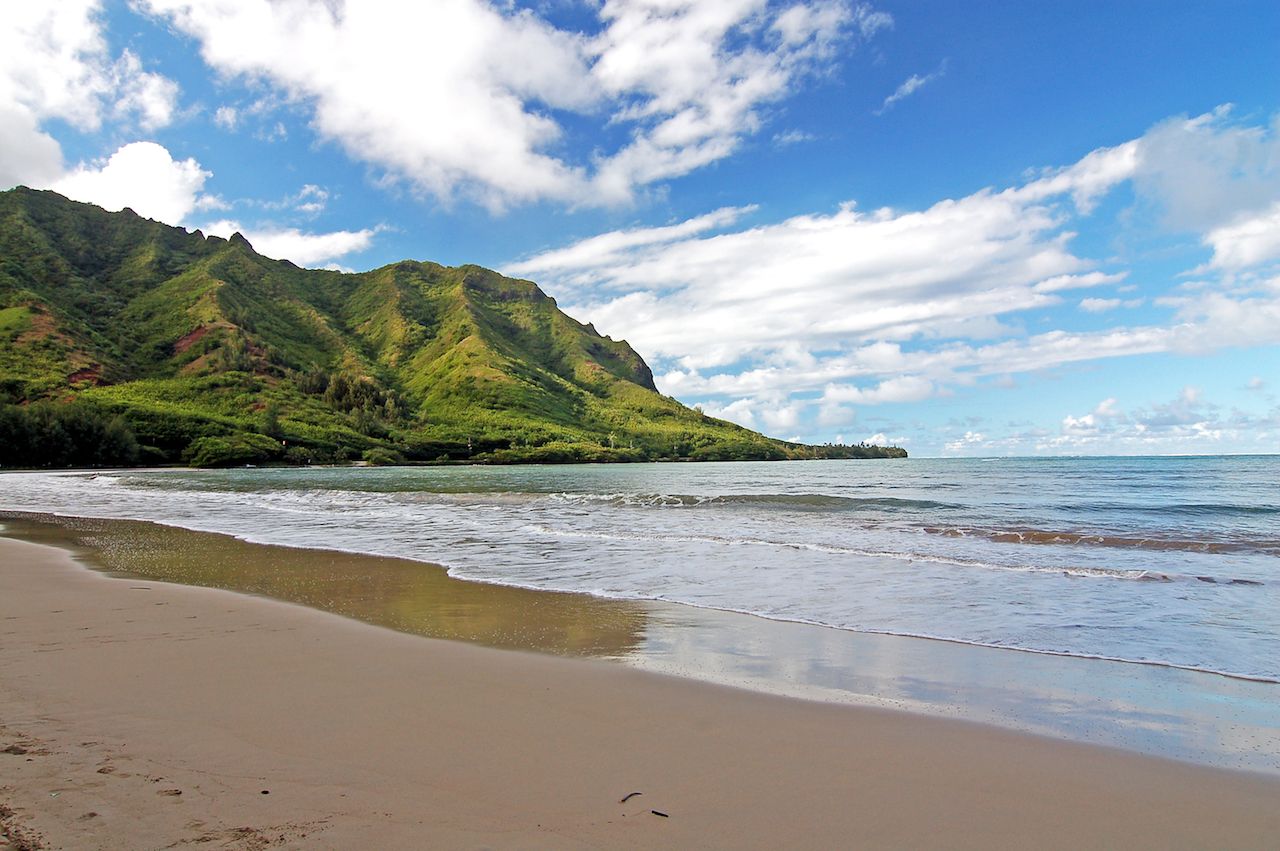 If you have always wanted to go to Hawaii, but thought you couldn’t afford to, think again. Forget the budget-busting hotels and resorts. From the tiny island of Lanai, which has one beach campsite, to the Big Island of Hawaii, which has 15, a pitch can cost as little as $3 a night.

One of the most beautiful campsites is at Polihale on Kauai, a remote golden sand beach framed by the Na Pali Mountains. The five-mile journey over rough track is worth the effort. There aren’t many pitches and the Polihale campsite is spread out enough for you to find your own secluded patch. The snag is that Hawaii’s campgrounds are tightly regulated and you must purchase permits in advance – but it’s a small price to pay for paradise. 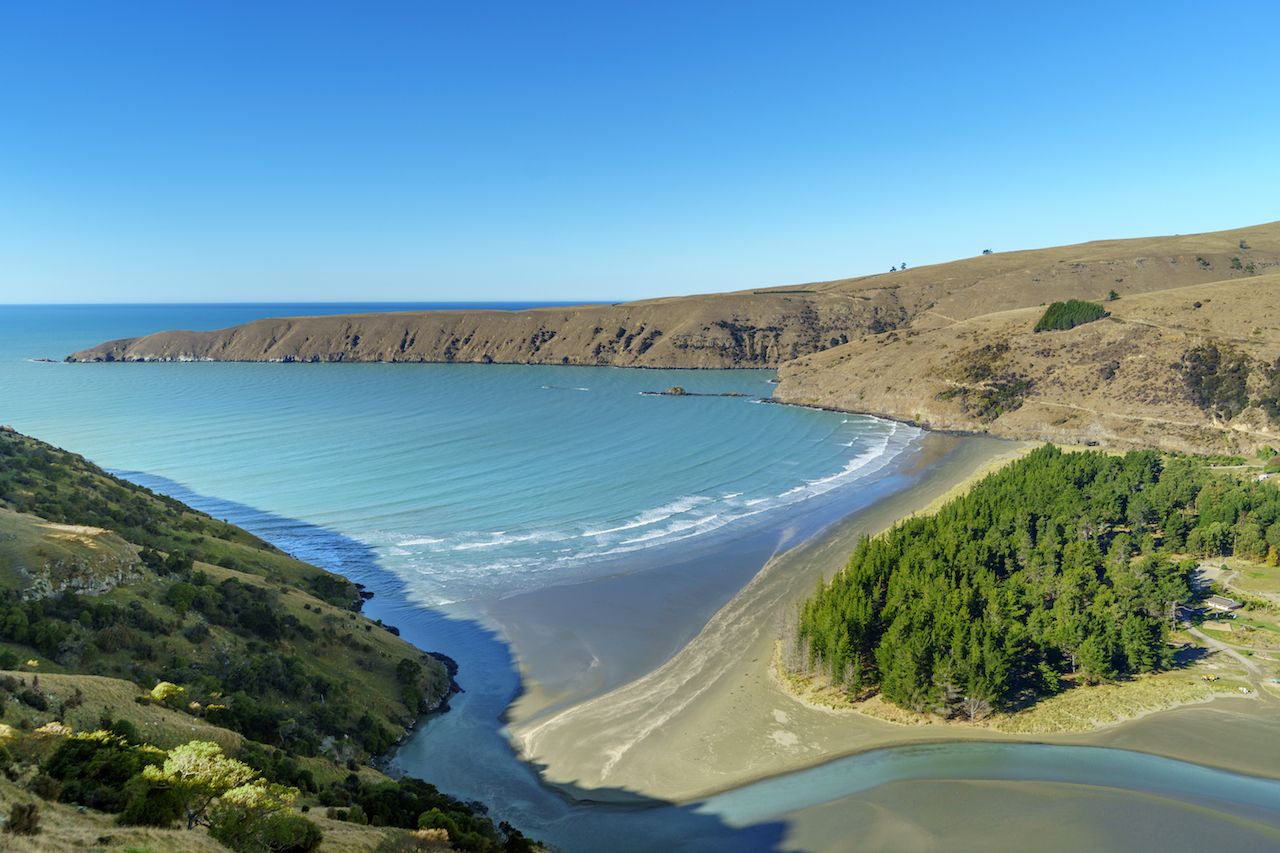 A spectacular descent over the hills from the small colonial town of Akaroa brings you to Okains Bay, an isolated beach on New Zealand’s South Island. The Okains Bay campsite is tucked away in a forest of pine trees at the rear of the expansive sandy beach. Sheltered by the trees and bordered by a river, it’s an idyllic spot to get back to nature and enjoy the sound of crashing waves.

Although basic, the campsite has showers and a kitchen. The settlement of Okains Bay consists of an old-fashioned convenience store, a Maori museum and a retro two-pump gas station. Seemingly a world away, but in reality only half an hour by road, Akaroa is home to galleries, cafes, and a supermarket. Swimming is good at Okains Bay and there are several walking trails nearby. 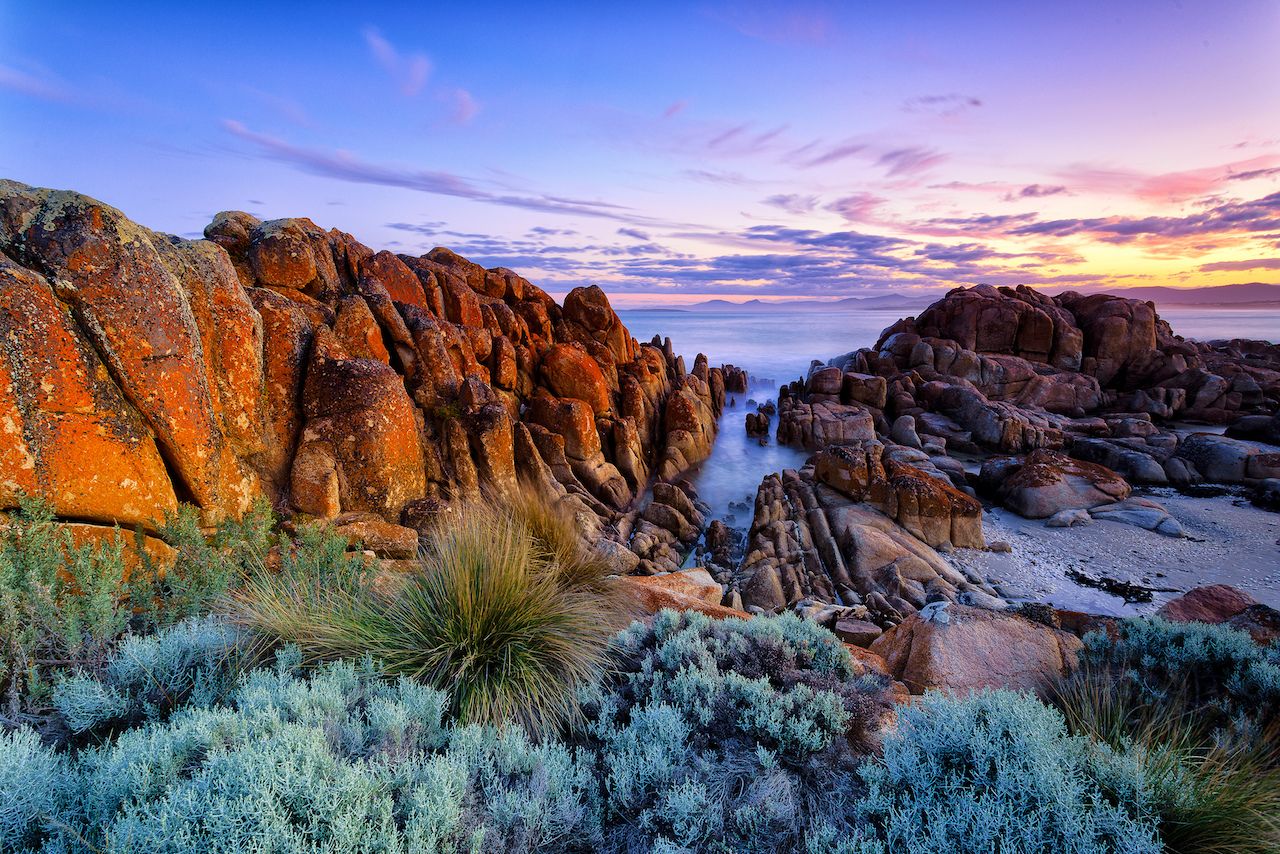 Choose a protected spot amongst the trees or an exposed grassy area by the beach. Either way, you don’t have to pay a penny to camp bush-style at Cosy Corner. It’s back to basics camping. Facilities are non-existent, and that’s what makes it so appealing.
Pristine white sand beaches and orange-tinted granite rocks are the main features of the coastline. The striking combination of the vibrant orange rocks and turquoise water is extraordinary. The area is rich in hiking opportunities with trails linking the bays. Nearby St. Columba Waterfalls can be reached via a short trek through the rainforest. 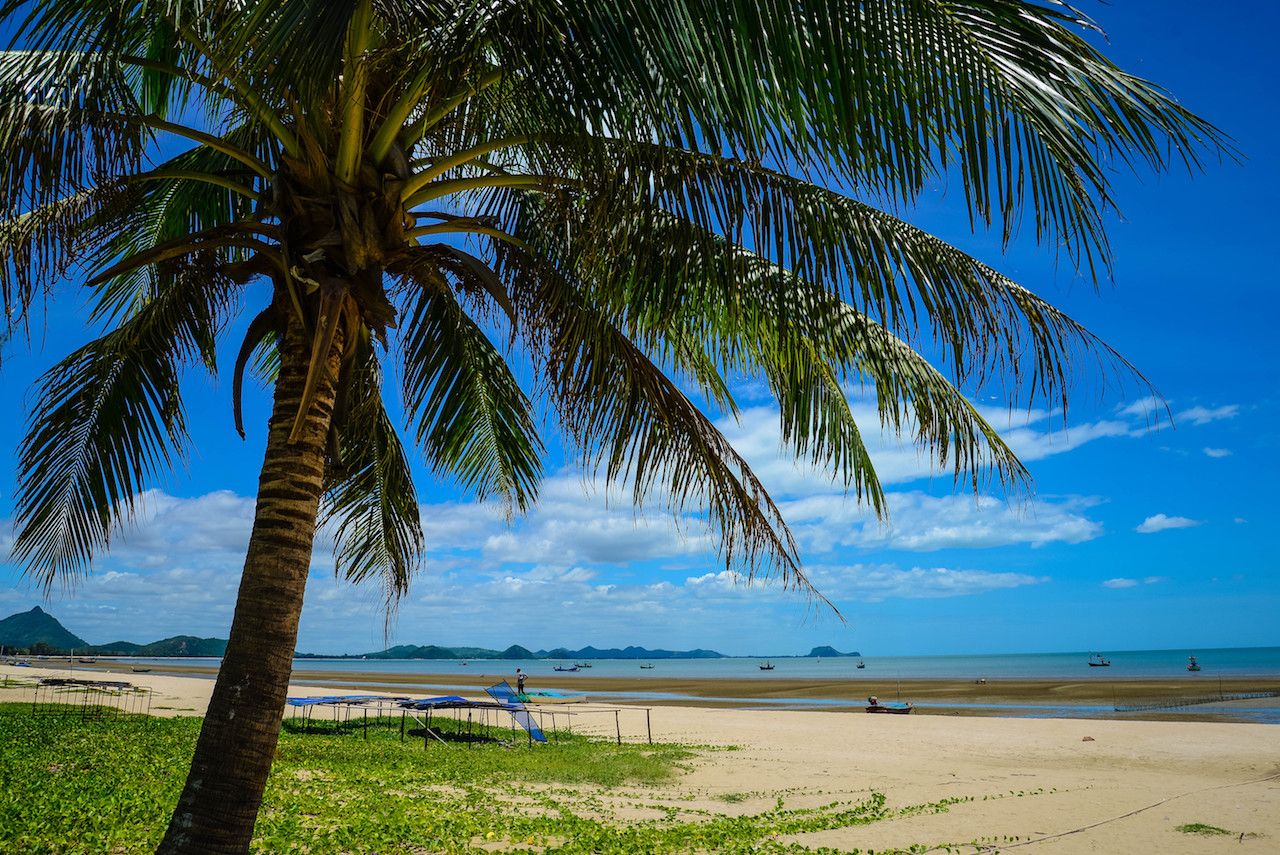 Just an hour away from Thailand’s crowded beaches at Hua Hin, you can escape to Khao Sam Roi Yod National Park. With its limestone hills, caves, and mangrove forest, it is also home to several beaches, a couple of which it is possible to camp on. To get there, you must either take a longtail boat from Bang Pu or hike over the hill for an hour. Either way, the views are impressive.

The beaches are wide and flat, and the bay is protected on three sides by limestone caves. Camping on the beach makes an ideal base for exploring the national park. One of the highlights is the nearby Phraya Nakhon Cave. The sight of the Kuha Karuhas Pavilion with a ray of sunlight streaming onto it through a hole in the cave ceiling is a worthwhile reward for the 45-minute hike. On route, you are likely to see dusty langurs and macaques. 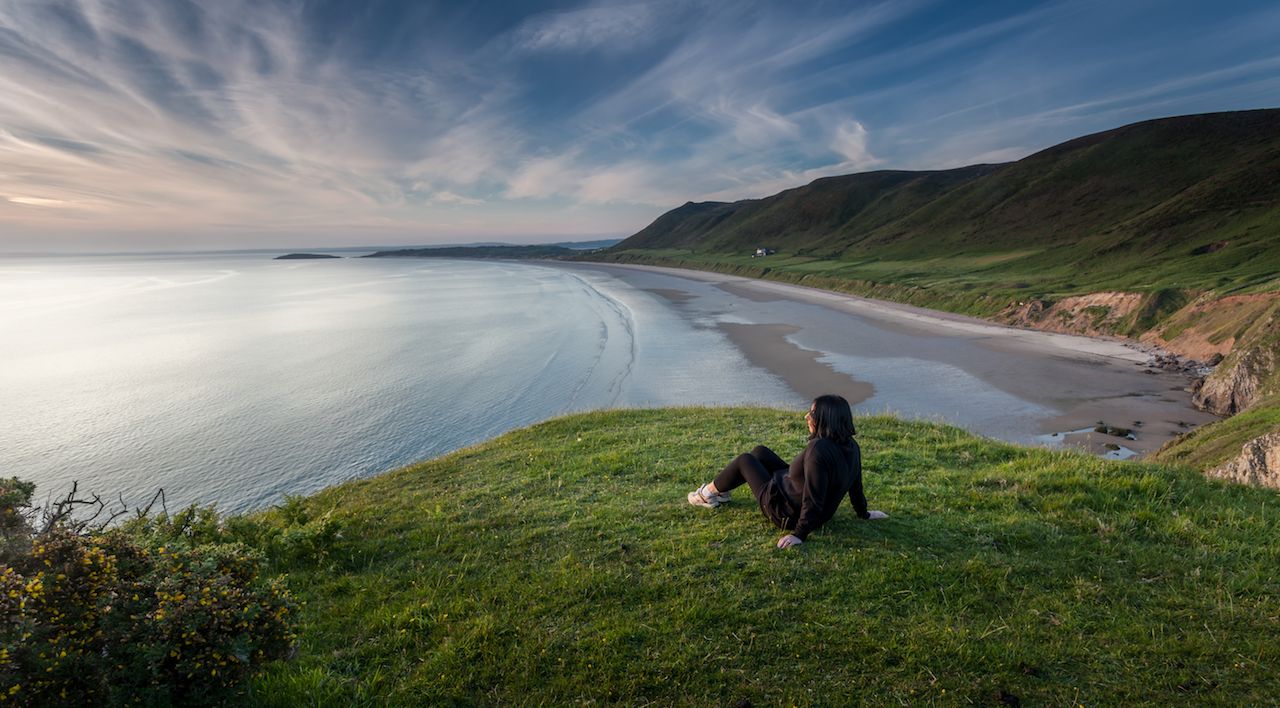 On a summer’s day, you could be forgiven for thinking that you are on a far-flung beach in Australia. A narrow country road takes you to the large Hillend campsite, which is nestled behind the rolling dunes of Rhossili Bay. Four miles of golden sand and the crashing waves created by a full Atlantic swell make this a favored hang-out for surfers and bodyboarders.

Despite having 300 pitches, the sprawling campsite never seems to feel crowded and has an air of peace and tranquillity. Hot showers are available and there are a shop and a café. A hike of a mile or so over the hill takes you to the King’s Head pub in Llangennith. If you tire of the beach, there are an abundance of villages and castles to explore in the vicinity. 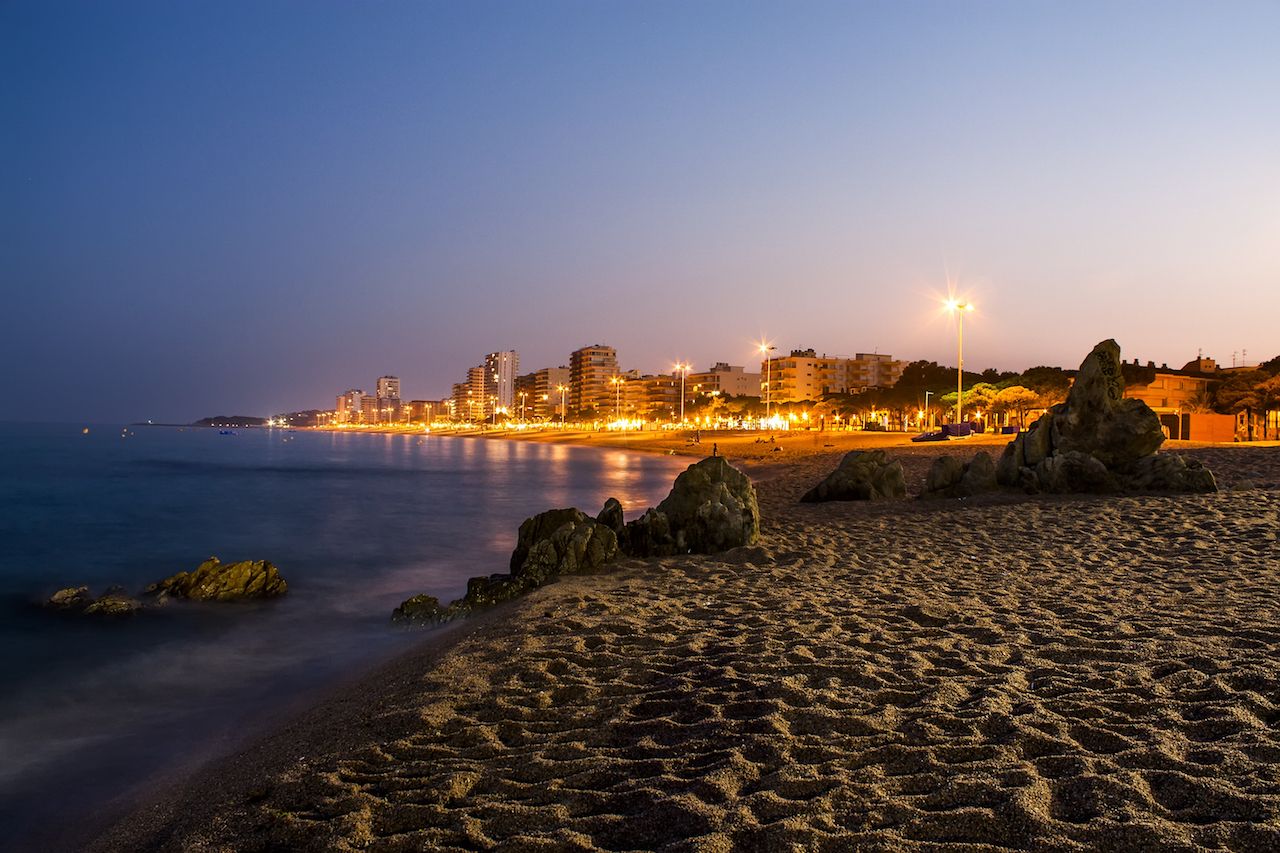 The low-key Sa Cova campsite is on the popular Costa Brava. Tucked away from the sun-bathing masses, you would never know you were on one of Spain’s most visited stretches of coast. The hidden cove overlooks a small, but perfectly formed beach with rocks on either side. The best of the pitches are in the shade close to the rocks and have views over the Mediterranean Sea.

Stone steps lead down to the bay where snorkeling is excellent and the clear water brims with colorful fish. A coastal path leads to other secluded bays in the area and hiking trails meander through the mountains. 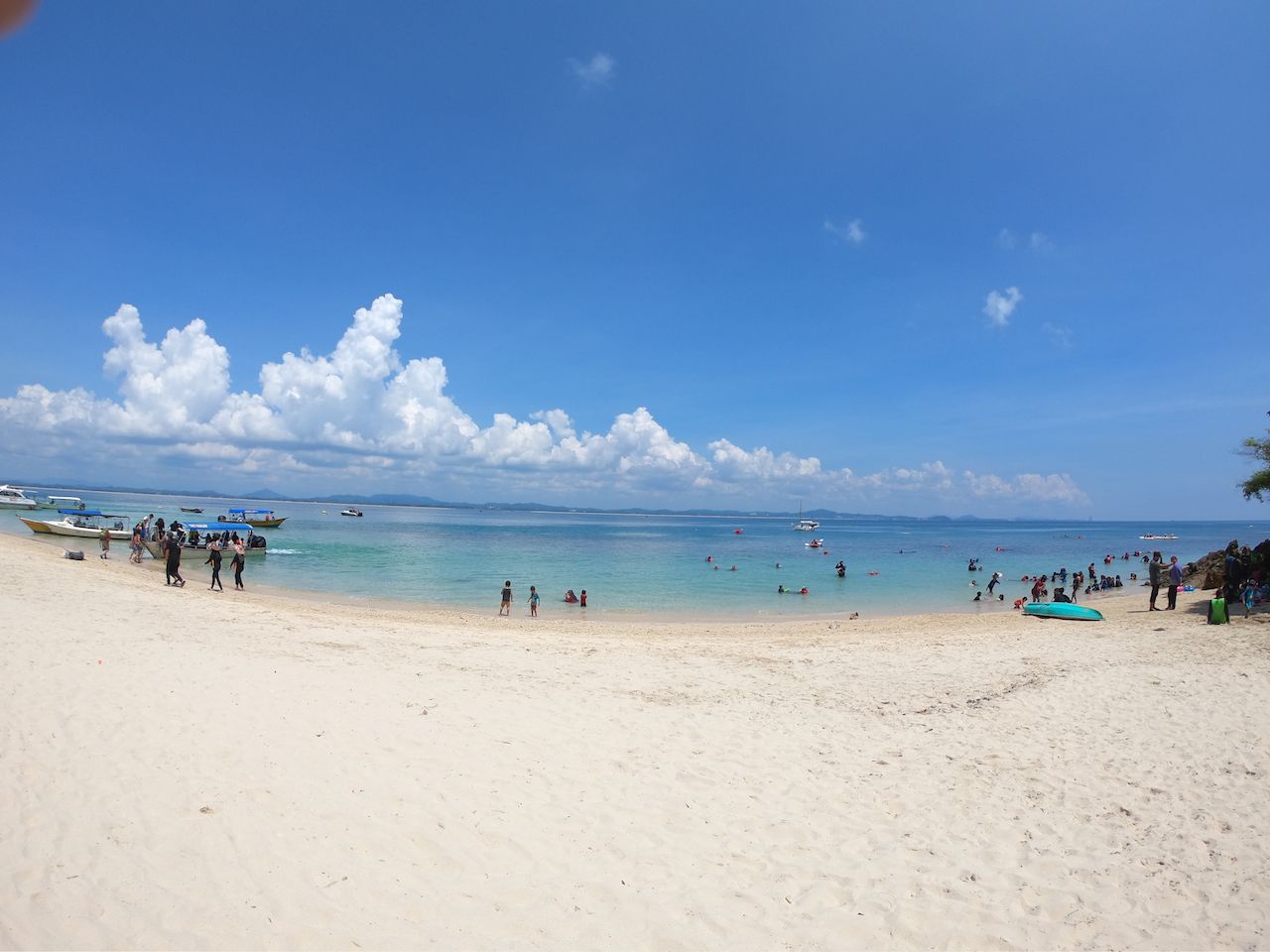 Beach huts are such a bargain in Southeast Asia that most people don’t consider camping. There is, however a small campsite on the island of Pulau Kapas where a night under canvas is worth considering. For a few dollars you can hire a tent on Longsha Beach and it costs even less if you have your own gear. The facilities are basic, but there are toilets, showers, a kitchen and a hammock to kick back in.

It’s a chilled spot and, although it’s popular with backpackers, people don’t come here for the party scene found on many of the other Southeast Asian beaches. You can swim with turtles, take short jungle treks, collect coconuts, and watch shooting stars. Unsurprisingly, many people come for a couple of days and stay for weeks.

CampingSuper Simple Packing List for Your Next Camping Trip
Tagged
Beaches and Islands Camping
What did you think of this story?
Meh
Good
Awesome